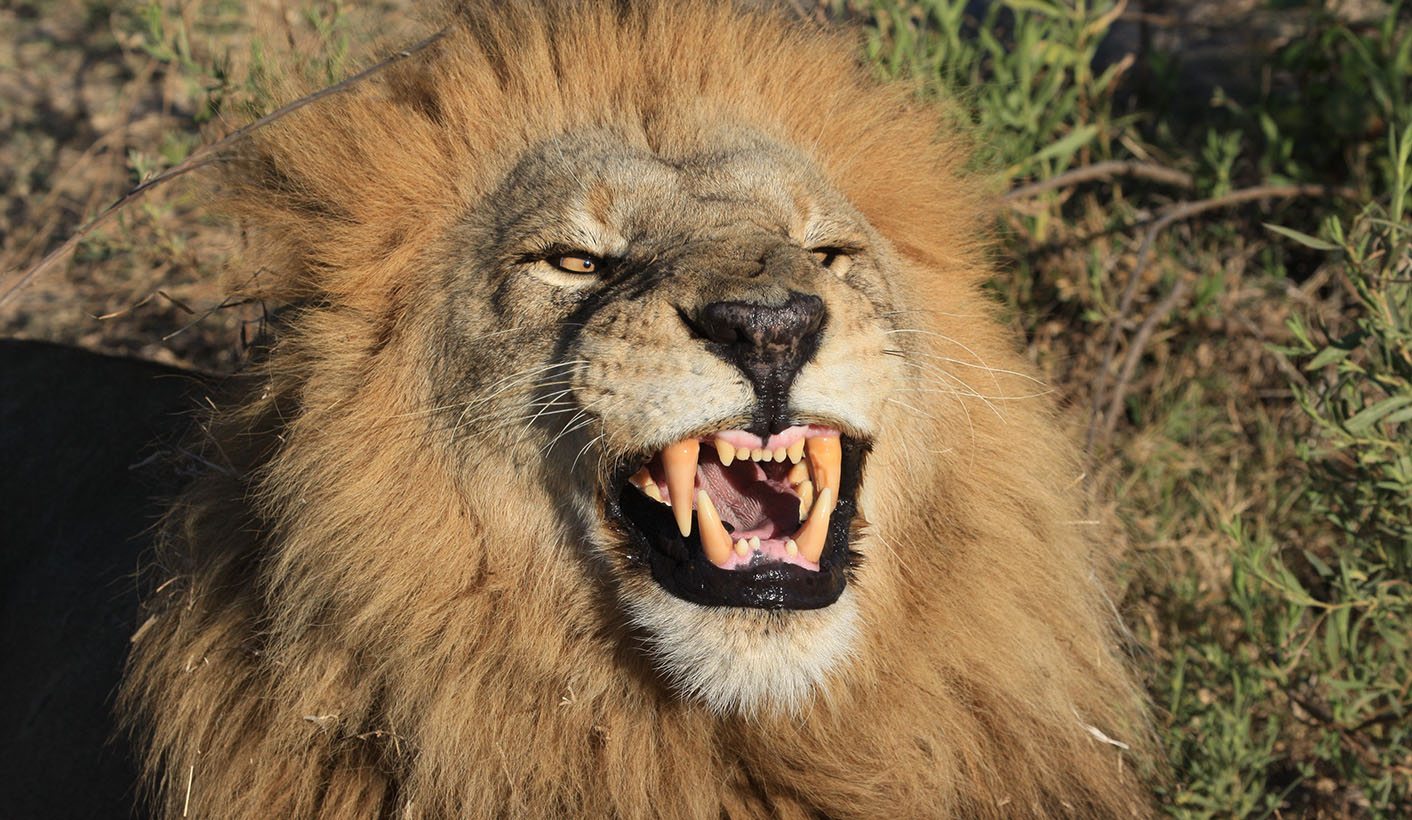 The Department of Environmental Affairs has been slammed for allowing canned lion hunting and the export of lion bones without evidence that it has any scientific or conservation value. The British NGO Born Free Foundation says that the department is supporting a small clique of breeders and the situation is providing loopholes for wildlife traffickers. By DON PINNOCK.

In a report, Cash Before Conservation, released on 19 March, Born Free says the Department of Environmental Affairs (DEA) persists in allowing canned hunting, trade in lion bones and sale of rhino horn while admitting its decisions are not backed by science or conservation information.

“It is alarming,” says the report, “that the DEA has issued an export quota of 800 skeletons and permits for thousands of other skeletons and large quantities of bones since 2008 without having completed any of the research it has now commissioned. This also applies to the continued breeding of lions for hunting.”

Born Free says the DEA also cannot demonstrate that the trade in bones from captive-bred lions will in fact protect wild lions in Africa or tigers in Asia, neither can it provide any evidence that the trade will not prejudice the survival of wild lions.

“Far from contributing to lion conservation, lion breeding poses an additional threat to wild lions through the legal export of lion bones, mainly to Asia. The trade stimulates demand for lion bones, which are increasingly used as a substitute for tiger bones in wines.

“This in turn incentivises poachers to target wild lions and launder their bones into these markets.”

This appears to be confirmed by an increase of the past 18 months of wild lions killed by poachers for body parts in Southern Africa.

The report says profits are being placed before sound and ethical wildlife management. This is having an increasing impact on world opinion, and South Africa’s stance on captive lion breeding has been intensely criticised, both domestically and abroad. Even the world’s largest hunting organisation, Safari Club International, recently refused to acknowledge trophies from or advertise hunts of canned lions.

‘In the light of this overwhelming opposition,’ says the report, ‘why does the DEA still persist in allowing the captive breeding of lions and lion bone exports?’

Born Free expressed concern that the legal trade in captive bred lion skeletons and bones may be used as a cover by criminal syndicates to launder illegally obtained bones and skeletons from wild-caught animals. According to many conservation organizations and wildlife groups, syndicates involved in the illegal trade in wildlife are exploiting rising prices for fake tiger bones.

The International Union for the Conservation of Nature estimates that as few as 20 000 wild lions remain in Africa, occupying just 8% of their historic range. Breeding facilities, mainly in the Free State and North West Province, privately own around 8 000 lions and other predators at more than 200 sites, many languishing in poor conditions.

Between 2008 and 2015, South Africa issued permits for the export of more than 5,363 lion skeletons, nearly 98% of which went to Laos and Vietnam, countries considered by global conservation and law enforcement agencies as key conduits for massive illegal international trade in wildlife.

In a written answer to a question in Parliament, the Minister of Environmental Affairs, Edna Molewa, admitted that permits for the sale of lion bones and skeletons included some to the notorious Laotian wildlife trafficker Vixay Keosavang. This is despite the fact that Keosavang’s role in widespread illegal wildlife trade had been noted by various law enforcement agencies in Asia from as early as 2003.

Keosavang also played a key role in one of South Africa’s best known rhino poaching cases in which a Thai citizen, Chumlong Lemtonghtai, was found guilty of staging “pseudo hunts” during which a large number of rhinos were shot, ostensibly to be exported as trophies. In fact the horns were sold into the Far Eastern traditional medicine market.

Last year The Guardian reported that Keosavang was granted permission to trade in 12 different species including crocodiles, monkey and pangolin anteaters, the skins of 100,000 pythons, 250 tonnes of soft-shelled turtles (which would mean killing about 45,000 of the animals), 100 tonnes of dogs, which are commonly cooked in Vietnamese restaurants, 1,000 magpies and 20 tonnes of animal bones, probably for ‘tiger-bone’ wine.

Information obtained from the Gauteng Provincial Government by researchers also shows that in 2016, permits were issued for the export of 153 lion skeletons to Vinasakhone Trading in the Lao People’s Democratic Republic (Lao PDR), a company which has repeatedly been shown to be at the centre of extensive illegal trade in wildlife.

According to the report, in South Africa captive lions bred to be killed are unashamedly exploited for profit by their captors at every stage of their often short lives. Cubs are removed within a few days of birth in order to bring their mothers back into breeding condition quickly.

“They provide unwitting tourists with cute photo props and misguided volunteers with cubs to hand-rear in the mistaken belief that they are genuine orphans and that, one day, they are destined to be returned to the wild.

“As the animals grow,” says the report, “they are used for other tourist activities such as walking with lions. The ultimate fate for many of these unfortunate animals is to be shot in a canned hunt by a paying hunter, usually from overseas, to be killed so their body parts can be exported to Asian markets, or to be cycled back into the breeding machine.”

Under the banner of sustainable use, the DEA has increasingly treated the wild creatures it should be protecting as a source of revenue. The number of predators bred in captivity in the country has increased significantly over the past 20 years and it now holds more lions in captivity than any other country in the world. During this period, South Africa became one of the few administrations advocating international sales of elephant ivory and the breeding of colour variant game species. Controversially, it also recently re-opened domestic trade in rhino horn and is the largest global exporter of live cheetahs.

According to Born Free, Minister Molewa, who used to be premier of North West Province where canned hunting of lions is widespread, appears to be working against earlier recommendations of three environmental ministers who preceded her. In 1997 Pallo Jordan recommended a moratorium of the issuing of licenses to lion breeding facilities. His successor, Vali Moosa, was outright opposed to breeding of lions for hunting and his successor, Marthinus van Schalkwyk, said the practice of captive-bred hunting should be disallowed.

Molewa appears to have sidestepped the issue of canned lion hunting by insisting that the DEA does not have a mandate to look after the welfare of wild animals in captivity. She says she believes this duty falls under the Department of Agriculture, Forestry and Fisheries (DAFF), which administers the Animal Protection Act and the Performing Animals Act (these acts were never intended to deal with the welfare of wild animals held in captivity).

In April 2015, a draft Biodiversity Management Plan for Lion (BMP) was submitted to parliament which encouraged further growth of the canned lion industry. This contradicted its mandate to conserve wild animals and to not encourage or facilitate trade unless this supported conservation efforts.

The plan was drawn up by the South African National Biodiversity Institute (SANBI). It emphasised the Government’s support for trade in lion parts and stated that one of the objectives of the plan was to “promote sustainable legal trade in lions and lion products”.

According to Wild Aid, this position shows that in the past five years, Van Schalkwyk’s attempts to curtail the lion breeding industry has been completely rejected by the DEA under its new leadership and that the government now publicly supports the industry.

The report notes that Molewa has, on several occasions, insisted that lion bone trade has no impact on wild lions, but has not provided any official documents supporting these claims. In 2016 the DEA refused to close down lion breeding facilities because of “legal issues” and because they fell within the government’s commitment to “the sustainable use of the country’s biodiversity”.

A spin-off of the canned lion industry has been a boom in donkey skins. Lion and other predator breeding facilities have, for many years, bought donkeys from rural communities to feed their animals. With a sudden rise in the use of donkey skins for traditional medicine in China, lion breeders have found another lucrative export.

Several African countries, including Niger and Burkina Faso, have banned the export of the skins because the trade has dramatically reduced donkey numbers. Other countries, including South Africa, Zimbabwe and Kenya, plan to exploit the new market and increase exports by permitting construction of new donkey abattoirs.

The North West Provincial Government, in particular, encourages trade in donkeys with China. In 2015, Premier Supra Mahumapelo met with a delegation from China and afterwards said trade in donkeys must be developed in the province to help create jobs. He called for donkey farms and an abattoir to be created specifically to provide for this trade.

Born Free says it’s unclear why the DEA would choose to support the business interests of a small group of people driven by the desire to make profit from lions and their body parts at the expense of good conservation practice – and in the face of overwhelming international criticism.

“Only… lion breeders and bone and skeleton traders benefit from the predator breeding industry and the DEA has no independent information on the number of jobs created by the industry.

“Approving sales to countries where large quantities of wildlife products are laundered into markets across the region – and whose traders are implicated in the illegal trade in rhino horns, pangolins and other species of conservation importance – only compounds the situation and serves to promote trafficking.

“If South Africa is to be regarded as a responsible and ethical custodian of its wildlife and a country that cares about wildlife elsewhere in Africa and across the globe, urgent action needs to be taken to curtail the captive breeding of lions and the sale of their bones and skeletons.” DM