The Promised Land: How MK vet made farming work for him 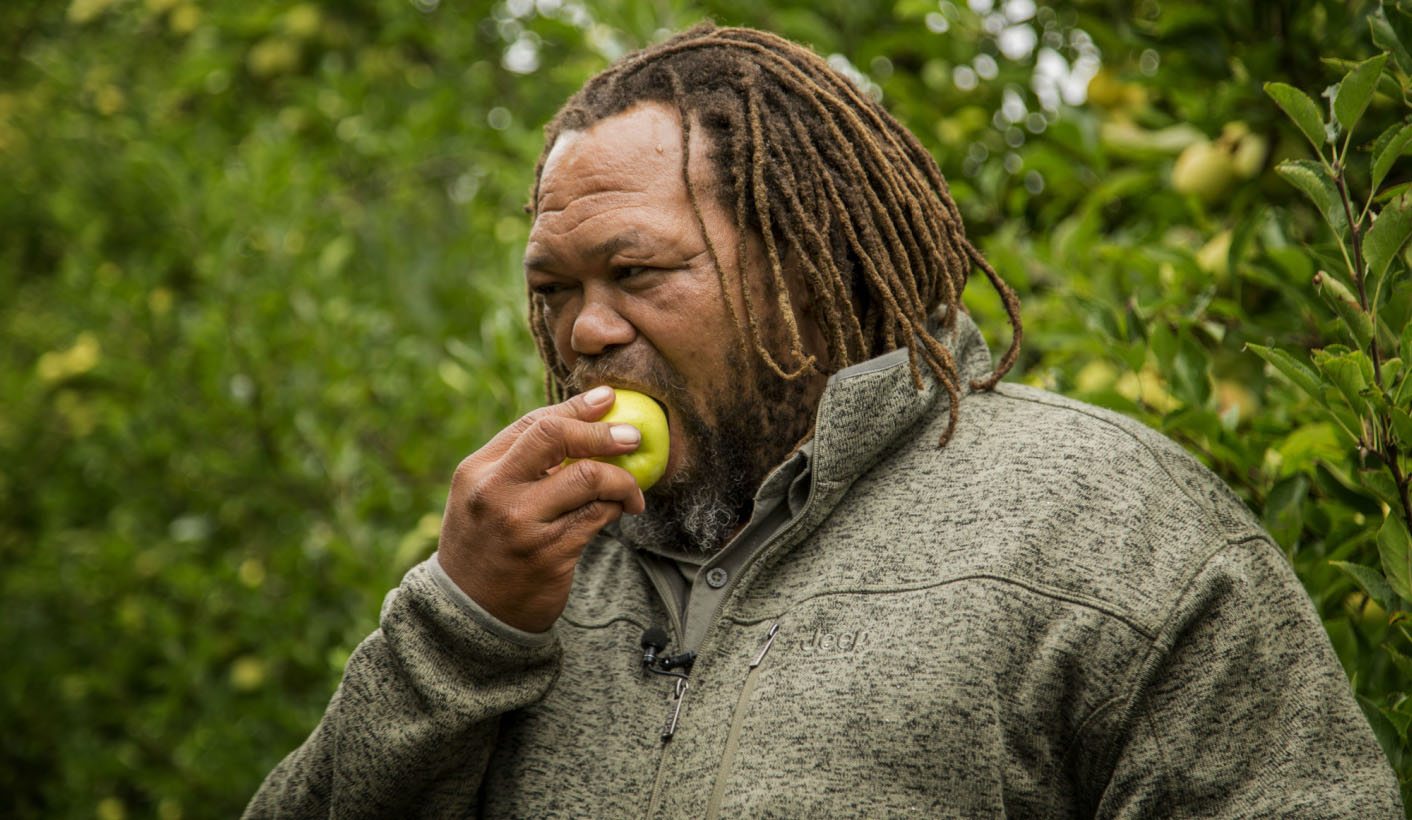 Former uMkhonto weSizwe fighter Errol April swapped his AK47 for apples. In 2013, April was given a Western Cape fruit farm to run as part of a government land scheme. With zero farming experience, the Mitchells Plain-bred soldier has succeeded in turning a previously debt-ridden farm around with the assistance of technical mentors and industry. In part one of a Daily Maverick series on land, we look at a case that defies the stereotypes. By REBECCA DAVIS.

Errol April, 49, is searching for the perfect apple, bending over leaves still glistening from recent rain.

“This!” he says, plucking a Golden Delicious and presenting it with a flourish. But April still isn’t entirely satisfied. He presses forward through his orchards, seeking a superior example. April’s favourite apple is the Royal Gala: a smaller specimen with a delicate pink blush. Delicious in desserts, he says.

Five years ago, what April knew about apples could fit on the back of an envelope. Today, they are his life.

The former uMkhonto weSizwe combatant is one of a relatively small number of black South Africans to date who have received formerly white-owned agricultural land to farm. On Wednesday, Parliament heard that by 2013, just 6.5% of such land had been transferred to black people.

It was in 2013 that April received the notification that his application to the Department of Rural Development for a farming project had been successful. Together with a fellow military veteran friend, April was chosen as a beneficiary of a government scheme called the Proactive Land Acquisition Strategy.

This approach, launched in 2006, has seen the government purchasing private agricultural land for distribution to “black people (Africans, coloured and Indians)”.

Significantly, however, beneficiaries do not own the land: they are given long-term leases from government, with the option to buy the land from the state after a certain amount of time. If it is determined that beneficiaries are performing badly, they may be expelled from the farms.

When April found out that he had been allocated a fruit farm to run, he admits that he was initially disappointed.

“We thought we would be looking after sheep or cattle,” he says ruefully.

“In our research, we found out that fruit farming… it’s quite a difficult one. You need endurance. You need strength.”

The farm that April was given to run is now called Amanzi. You approach it from a dirt road just outside the small town of Greyton in the Western Cape, where its 30,000-odd hectares are ringed by mountains. The farm’s previous owner built two dams, fed by waterfalls on the mountains. In a province scarred by drought, Amanzi – “water”, in English – still looks verdant.

Driving around the farm in a mud-smeared bakkie, April still can’t hide a faint sense of disbelief.

“I never in my life thought something perfect could happen, but this is perfect,” he says. “Waking up with birds, and no gunshots… it’s magic.”

On rows of trees grow various strains of apples, and also pears. Daily Maverick visited the farm in March: picking season, when the orchards are still heavy with ripening fruit. The harvest, said April, is set to be a good one.

But at the time when April took over the farm, it was not in good shape.

“The infrastructure was old. The forklifts barely worked. The trees were neglected. It wasn’t farmed to its full potential, and this you could trace (on its financial performance),” says April.

“Those were scary days.”

With no agricultural studies or experience to draw on, April and his business partner Jabu Dosi fell back on all they had: the skills they had learnt in the armed struggle.

“In MK we were well prepared for all sorts of activities and interactions,” he says.

Discipline and commitment had been hardwired into him by his background.

Still, there were many onlookers who thought April could never make it.

“When I saw him, I was under the impression: here’s another failure coming.”

That’s the frank memory of Philip Toerien, financial director of the Two-a-Day group, the fruit giant appointed as mentors to April’s farm by the Department of Agriculture.

Evidence of April’s progress is illustrated by the citation of the judges when April won the 2017 Novice Award from Hortgro, the deciduous fruit growers’ organisation.

In deciding to award April the prize, the judges wrote that they took into account the fact that April had succeeded in decreasing the farm’s debt levels from R2.5-million to R650,000 due to “tight controls”; the farm’s increase in revenue to R6.4-million during 2016 from R2.9-million in 2015; and the fact that April’s workers earn well above minimum wage. 20% of the farm’s profits are also held in a trust for workers.

“Errol acknowledges the importance of having good relations with his workers and has made their social welfare and training on the farm a priority,” a Hortgro spokesperson told Daily Maverick.

“I prune with them, I pick with them,” April says.

“This is a phenomenon you won’t find on other farms: the farmer working alongside the people, sweating. I brought that with me from my days in the Struggle.”

April, Toerien and Hortgro are all in agreement, however, that one of the factors that has enabled Amanzi to thrive has been April’s consistent, dedicated mentoring from established industry hands.

Technical advisers continue to visit the farm every week, giving advice on how to bring the farm up to optimum productivity.

“He has illustrated the ability to align himself with a very good network of experts to advise on strategic and day-to-day operations,” says the Hortgro spokesperson.

April is a charismatic, laidback individual – Toerien describes him as an “awesome dude” – who has only positive things to say about his reception by the Greyton community and the agricultural sector.

Ask him his views on the current land debate, however, and his bonhomie is replaced with a more serious attitude.

“The land must be returned,” he says, quietly but firmly.

April adds that the mentorship and guidance of white farmers will be invaluable in this process.

“We are saying not to be scared of this thing. We are South African. We must come together and help work this land.” DM