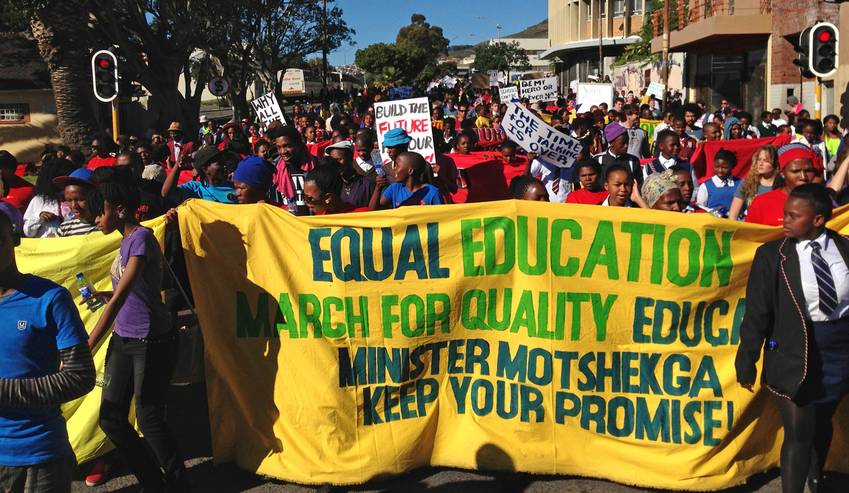 Judgment has been reserved in the case on norms and standards in Bhisho High Court. By Mary-Anne Gontsana and GROUNDUP Staff.

Bhisho’s High Court heard arguments on Thursday about who should be held accountable for schools that do not meet the Department of Basic Education’s norms and standards.

This was the second and final day of the hearing. Equal Education, represented by the Equal Education Law Centre, has applied for the court to address what it considers various problems with regulations for norms and standards for school infrastructure that the Department of Basic Education published on 29 November 2013. Basic Education for All (BEFA) has joined the case as a friend of the court and is represented by SECTION27.,

In a statement Equal Education said: “We chose to have this case heard in the Bhisho High Court, rather than anywhere else in South Africa, because the Eastern Cape is the province with the worst infrastructure backlog.”

On day two Advocate Chris Erasmus, counsel for the state, continued his argument that Basic Education Minister Angie Motshekga could not be held responsible for water and sanitation and electricity in schools because that was not her department. He stressed that the department had limited resources and budget constraints.

He referred to the department’s norms and standards policy which states, “the implementation of the norms and standards contained in these regulations is … subject to the resources and co-operation of other government agencies and entities responsible for infrastructure …”

Acting Judge Mzizi put it to Erasmus that the minister, according to the Constitution, was supposed to engage with other stakeholders and pro-actively co-operate with them.

“When the minister looks at what she’s supposed to do, she would pro-actively interface with the relevant stakeholders.”

Erasmus responded: “The regulations are to get schools that do not comply with norms and standards to ultimately get there. But one cannot go outside their budget to do so.… The minister can consult other organs of state to help, but they cannot commit themselves. At the end of the day, the money available has to be spread across all government entities. Yes, basic education is realisable, but we have to look at the resources available.”

Erasmus said the minister would love to have “unlimited resources” to build “five-star” schools.

“We submit that we can only do what the funds are available for and nothing beyond that.”

Erasmus said the applicants had not made a concrete case about why they want parts of the regulations struck down.

“The minister has said that schools built entirely of mud and inappropriate materials should be prioritised. The applicants say classrooms should be prioritised. Who is right here?” asked Erasmus. To which Judge Mzizi pointed out that there were affidavits from learners and teachers which state that it is an extreme danger to teach and learn in some of these classrooms.

“There are provisions in place for classrooms, like temporary classrooms which are containers. Yes of course classrooms must be upgraded. Yes they must fit the norms and standards, but a school built completely of mud must be prioritised not a classroom. One has to be pragmatic and realistic about what the government is able to do. That is not to starve a child of basic education,” said Erasmus.

The state concluded its arguments by asking for the application to be dismissed.

In response, SECTION27’s advocate Nikki Stein, argued that the state had not provided a justification of the continued dire need for proper facilities for learners.

Equal Education’s advocate Geoff Budlender also responded to Erasmus. He said that the minister was saying that she cannot implement the norms and standards because she doesn’t know anything about the other departments. If this was the case, Budlender said, it meant that the minister could not be held responsible for providing textbooks either. We would have to look at the writers of the textbooks, the publishers, the author, and the distributor, said Budlender.

He also said that the minister was not only the person who made regulations, but she was also a representative of the state.

Budlender concluded that the minister was trying to escape her duties by asking that other departments be joined, but the law does not require that these entities be joined to realise the norms and standards.

Judge Mzizi thanked the advocates and said judgment would be delivered at the end of May at the latest. DM