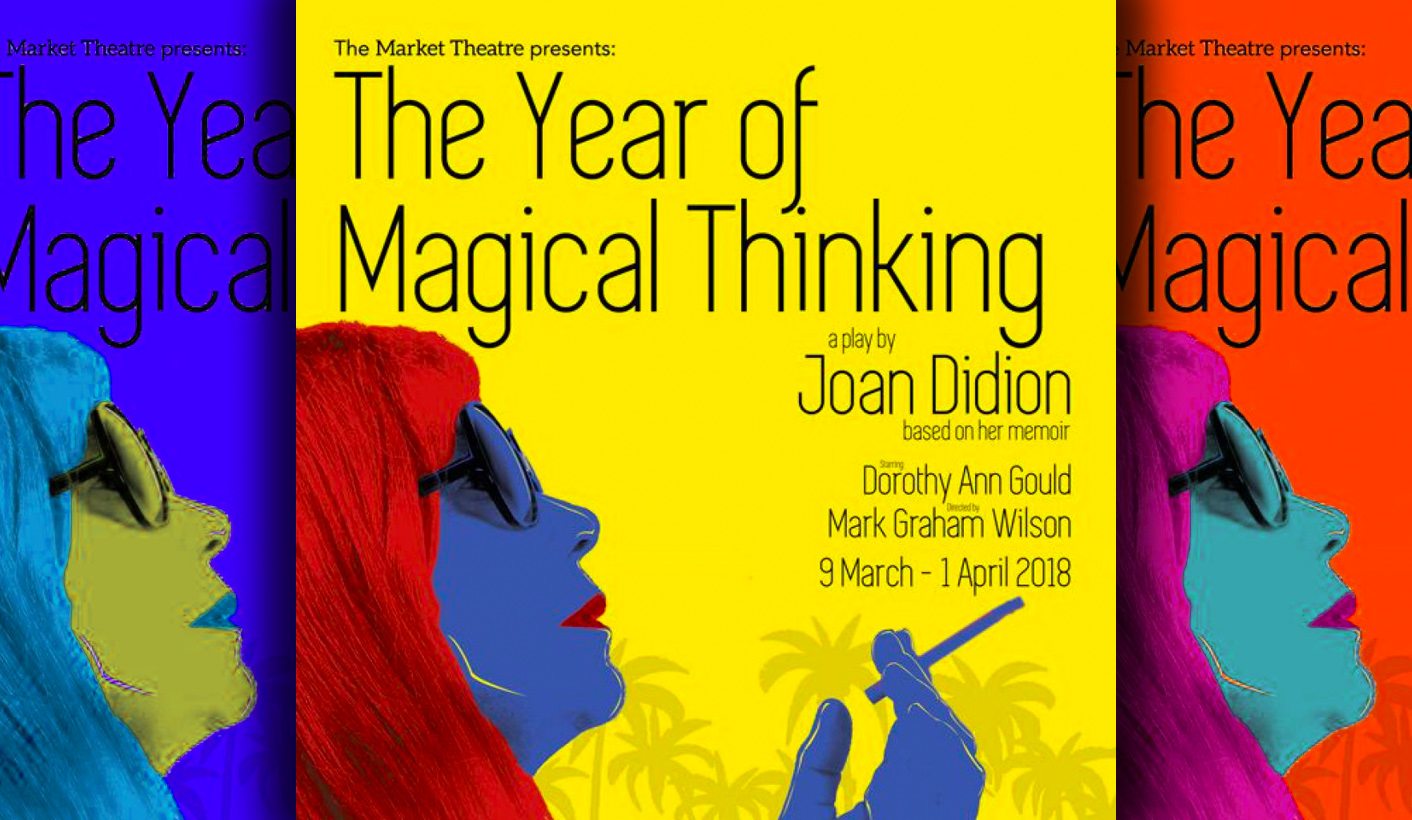 The Year of Magical Thinking is an effective meditation on the hopelessness and isolation surrounding the personal impact of loss and grief. By BRAD LATILLA-CAMPBELL.

“Grief turns out to be a place none of us know until we reach it.”

Joan Didion’s The Year of Magical Thinking, playing at the Barney Simon at the Market Theatre, uses this destination as a mirror for the audience to peer into, to examine and evaluate their own grief and experiences in working through it.

The journey is involved, raw, and personal; Dorothy Ann Gould, as the sole performer in the character of Joan Didion, engages the audience on an intimate level, fusing Didion’s lyrical scripted prose with direct addressing of the audience to spellbinding effect.

Indeed, it is Gould’s performance that ties the entire production together: as a woman struggling with the impact of losing a life partner unexpectedly, while simultaneously needing to care for her comatose daughter, her slips from composure to self-aware mania give the monologue an almost ethereal quality, as if being read directly from the pages of a book.

In this, Gould is assisted by the lighting design of Thapelo Mokgosi, and Jurgen Meekel and Andrea Rolfes’ excellent audiovisual work. The lights combine with projections onto the stage to alternately mesmerise and unsettle, turning the calming effect of a gorgeous blue sky into a terrifying vortex, leaving the audience unable to tear their eyes away despite the magnetic delivery of Gould just below. The effective use of projections is difficult to achieve, as we have seen in a few of the Market Theatre’s recent productions, but here they are put to great use, each one underscoring and enhancing the action on stage without causing an unnecessary distraction.

It is the action on stage that stands out so memorably from the performance. Gould and director Mark Graham Wilson transform the black box Barney Simon Theatre into a myriad different locales and settings, using the literal blank canvas – of memory, of art, of one’s own future – as a launchpad for mapping out the journey that Didion’s grief over first the death of her husband and then the gradual descent from wellness of her daughter.

Gould’s physical movement, as Didion, from tottering, fidgeting wreck to natural storyteller and back again, gradually reveals the enormity of the tragedy that has befallen her family, slowly dragging her recovery two steps forward only to be pulled one step back at every turn. Her furtive bursts of hysteria coupled with the quick reigning in of emotion only serve to underscore the need felt by Didion to control and preserve the veneer of normalcy.

Those brief moments where restraint is lost, and then quickly gathered back up by Gould in a desperate fashion, so as not to admit that the loss is real, are the ones that most engender the profound connection with the audience. I found myself considering and comparing my own reactions to loss and my own perceptions of grief as Didion’s journey went on, and as Gould’s slightly dotty portrayal came to reveal a greater journey through time.

It is the gentle uncovering of the vulnerability at the core of Gould’s performance that is so central to the connection with the audience. Like any drama, this awareness of the sharing of intimacy envelopes the audience in the world of the play – and at no moments more completely than when Gould’s tone of voice shifts from storyteller to suddenly befuddled and alone, struggling against the weight of expectations she feels on her and the reality that she must face them alone.

The Year of Magical Thinking – adapted from Didion’s 2005 memoir of the same name, with an effective final chapter added for the stage to document the passing of Didion’s daughter, Quintana – is an effective meditation on the hopelessness and isolation surrounding the personal impact of loss and grief.

Mark Graham Wilson, Dorothy Ann Gould and the rest of the production staff have crafted an excellent piece of work, one that provokes thought and awe in the best tradition of reflective drama. DM