Op-Ed: Clean Coal is the way to power Africa – and SA academics know how 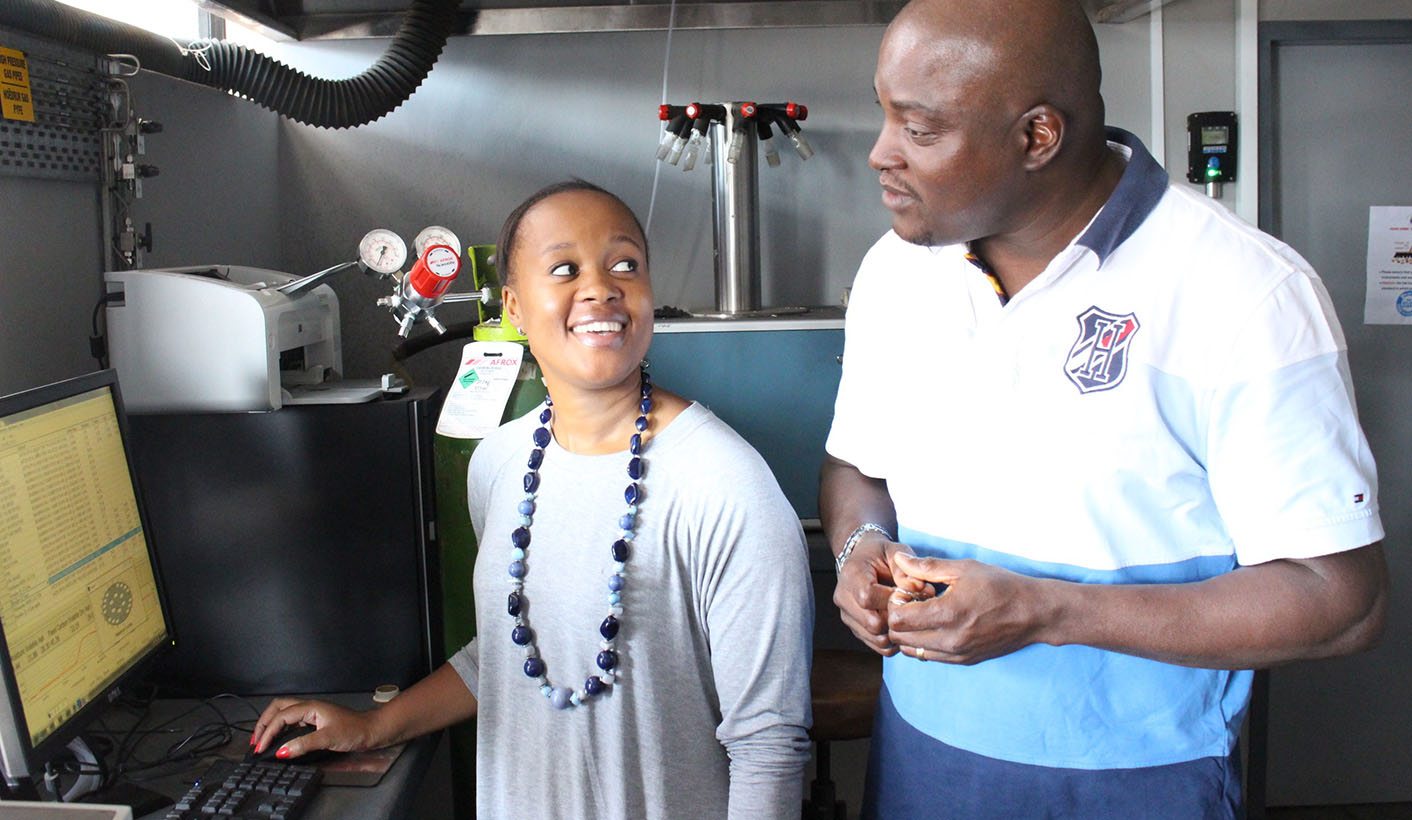 Donald Trump can talk about “beautiful clean coal”, but South Africa may be years ahead of the United States in achieving the dream. By GEOFF HILL.

Professor Rosemary Falcon heads the Sustainable Coal Research Group at the University of the Witwatersrand (Wits) in Johannesburg, where the late Nelson Mandela studied law in the 1950s.

Falcon leads a team of nine academics along with 20 Mastersand doctoral students who, with their own laboratory at Wits, say they have proved conclusively that clean coal is not only possible, but among the cheapest ways to generate electricity on a continent where more than 600 million Africans live without power.

“It starts by understanding that coal varies enormously,” she said.

“Each region has a different recipe of minerals and fossil matter, and if you give me a lump of coal out of Kenya, the US, Europe, India or Colombia, I can probably tell you where it’s from.”

In North America, she said, coal was formed in hot, steamy swamps, and it burns rapidly. Ours was formed at the end of an ice age and burns for longer and at a higher temperature.

Photo: Professor Rosemary Falcon and her husband, Lionel, a retired engineer ‘who helps me understand how to apply our science in the real world’. Photo: Geoff Hill

“An industrial boiler from Europe, fed with South African coal, will melt because our product burns so hot. But we also have more ash that actually absorbs heat, making the fire less efficient. So one of the first steps is to alter the coal before you light the fire. Or build a boiler designed for each coal type.”

Working with Falcon is Dr Nandi Malumbazo who took her PhD in chemical engineering at Wits.

“In Africa, the use of coal is growing and that’s something we have to deal with,” she says.

“The challenge is to burn it more cleanly and this starts at the mine with techniques we’ve developed to separate poor quality coal from the better stuff that is already less toxic.

“You then crush it and remove elements that will not contribute to a good burn. Like unleaded petrol, you’re starting from a better place. Less ash, less fumes, more heat and a longer burn. From there we’ve done experiments and written up peer-reviewed research to show we can use it way cleaner than in most countries.”

South Africa gets more than 90% of its power from coal, in Botswana it’s 100%, and both Kenya and Tanzania are building new coal-fired generators.

The Wits research has drawn praise from across the continent. Dr Samson Bada of Nigeria has joined the team, along with Dr Jacob Masiala from the Democratic Republic of Congo. Both are working on ways to get the lights on in Africa and keep the air clean. There are also post-graduate staff and students from Zimbabwe, Botswana and Mozambique.

“If we mix pulverised coal with bamboo, something that grows well in Africa, we take emission levels down even further,” said Masiala.

“Of course, a bamboo plantation also gives you carbon credits, and we can grow it on old mine sites to rehabilitate the ground. It’s a winner on so many fronts.”

West Africa has a low grade of coal, formed more recently than elsewhere though still millions of years old. But while Nigeria is Africa’s largest oil producer, only half the population is on the grid.

“Air pollution is a serious problem in my country,” said Bada.

“We must bring it down but we also need a lot more clean electricity. The research we are doing here can change everything.”

However, for all its groundbreaking work, South Africa’s clean coal is in trouble.

“Funding has been difficult,” said Falcon.

“We have to scrape and beg for every cent. I’m hoping a new approach to coal in Washington will see money for work like ours, not just in the US but across the globe, and we’d be happy to share our findings with the world, and to teach and train people everywhere, especially in Africa,” she said.

Falcon and her team have indeed shared their findings. She has given lectures at prestigious schools like Cambridge University in England, while Nandi Malumbazo has been to Germany, Australia and the Philippines. Bada and Masiala have delivered papers in the US, Norway and Italy.

The use of coal to generate electricity in Africa is at a record high, with new plants under way in Kenya, Tanzania, Botswana, Mozambique and South Africa. Bada has little time for those who condemn this.

“I am tired of being lectured by people in rich countries who have never lived a day without electricity,” he said.

“Maybe they should just go home and turn off their fridge, geyser, their laptops and lights. Then live like that for a month and tell us, who have suffered for years, not to burn coal.”

“Aid groups come to Africa and give out solar lamps the size of a pumpkin,” he said.

“But no one in London or Los Angeles would be willing to make do with that. Don’t tell me that China, Russia and the West should have electricity and black people in Mali or Mozambique should live in huts with light from a solar toy. We need power for cities, factories, mines and to run schools and hospitals.”

The coming revolution in Africa, he said, was not about land, religion or politics, but a lack of jobs.

“Africa is urbanising faster than anywhere on the planet. And our urban youth are on the same Facebook and WhatsApp as kids in Chicago. They watch the same Big Bang Theory on TV and have the same aspirations.”

Millions of school leavers, he said, can read and do algebra but have no work. And the lack of industry, he said, was linked to electricity.

Bada said he was a fan of wind and solar, but the technology was not yet there to industrialise a continent.

“Solar doesn’t work at night, and turbines stand idle when the wind doesn’t blow,” he said.

“How do you run an operating theatre with that? How do you power a city, a school, the lift in a gold mine taking workers more than two miles underground? There has to be a baseload power supply and this can be complemented with solar. The industrial revolution and the growth of China and India has all been powered by coal. The good news is we can now burn it cleanly.”

Bada said thousands of power stations around the world are still pumping out emissions from coal when it was possible to make them clean.

“What holds up the process is not a lack of knowledge, but funding and political will. And every day we live with the status quo, people are forced to breathe dirty air. That is tantamount to a crime against humanity if we have the science but do nothing.”

African countries, he said, needed a massive jump in the amount of power they generate.

“Tanzania, for example, has around 70% of its people still short of electricity while it sits on four billion tons of coal. And still we hear activists from wealthy countries chanting, ‘Leave it in the ground.’

“Electricity in Africa is not just an ethical issue, it’s the key to security and growth. It’s having no work and no hope that sees people forced into poverty, joining militia or heading for Europe,” he said. “The rich world ignores that at its peril.”

The Wits faculty wants to build an Academic Clean Coal Alliance, or ACCA, a global network of researchers.

“Whether you’re an engineer, a geologist or a doctor of physics, if you share a passion for clean coal, you’re welcome to join us,” Falcon said.

“Our concept is for a politically neutral group to include those in countries in Africa, India and as far afield as Russia, the US, Britain, the EU and anywhere else,” she said.

Falcon said she was working on sponsors and funding for the alliance which, while academic, would offer associate membership to industry, government and the media.

If there’s one thing that angers everyone at the faculty, it’s those who say clean coal is a myth invented by Donald Trump and his allies in business.

Falcon said they were either in denial or unaware of the truth.

“In our grandparents’ time all that was true, but today we have options. Fat-free yoghurt and cosmetics not tested on animals. And we have clean coal, provable, peer-reviewed and with experiments that can be replicated in any lab.

“Here in South Africa, we are long past the stage of proving clean coal. Now we’re looking at how to apply it, and especially for the coal types in Africa.”

The science, she said, was there.

“Clean coal is a reality. And we must start using it now to make a better world.” DM