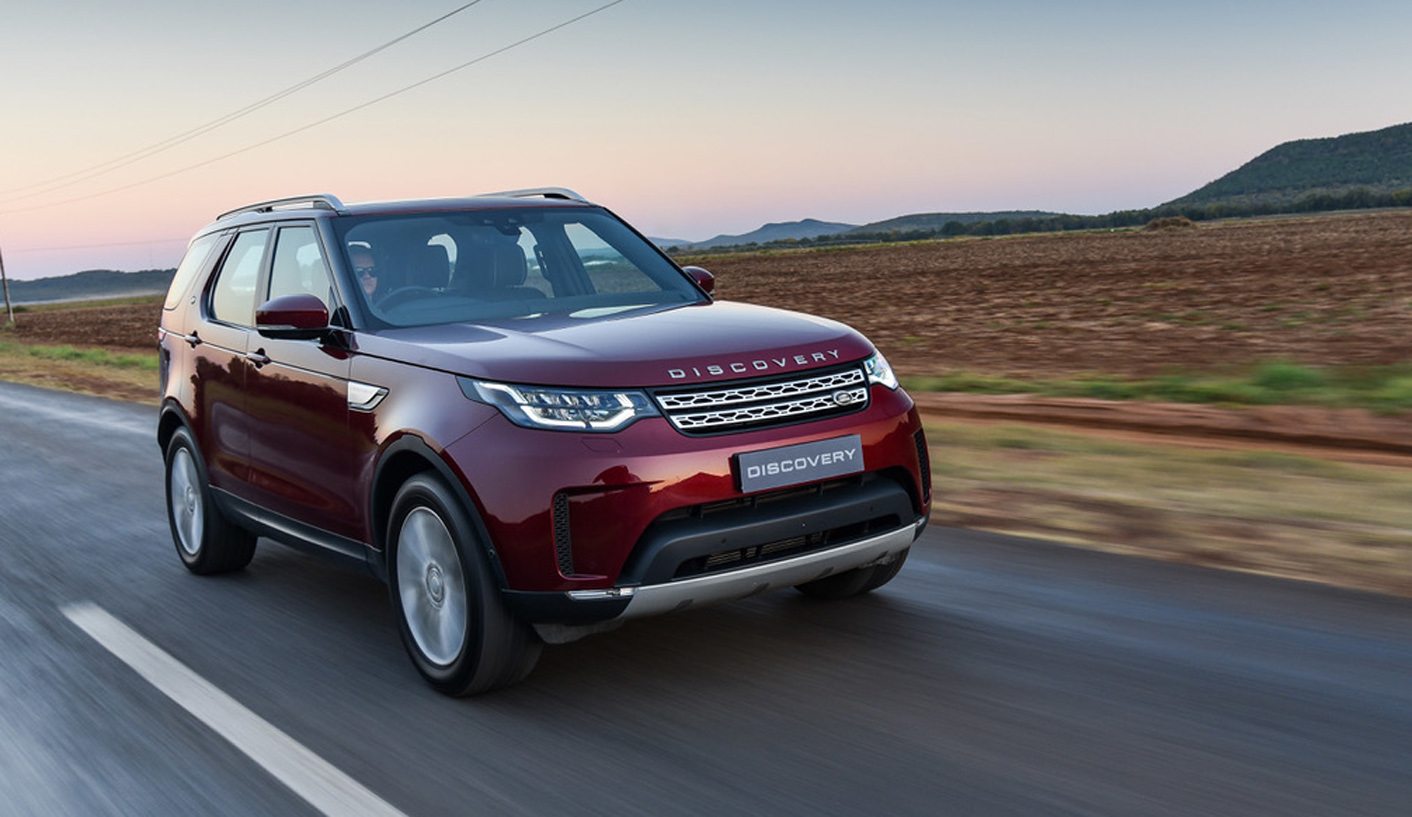 The latest Land Rover Discovery links the brand’s off-road DNA with a design exuding sophistication, space and luxury. Is that what 21st Century Discovery buyers demand? By DEON SCHOEMAN.

All photos by Rob Till.

My first experience of the Land Rover Discovery was way back, in the late 1990s, during the British marque’s somewhat uneasy marriage to luxury carmaker BMW.

The original, first-generation Discovery had just been replaced by a new, second-generation model after almost a decade. It was an honest off-roader first and foremost, making the most of its Land Rover heritage.

But thanks to its Range Rover-based platform, it managed to tinge its functionality with a measure of luxury and innovation, too.

The new Discovery didn’t look all that different: it retained the boxy, angular look, together with the trademark stepped roofline. It also kept its almost bluff, no-nonsense character, emphasised by an interior focused as much on practicality as on comfort.

That allowed it to slot in neatly between the no-compromise Defender and the luxurious Range Rover. It offered plenty of creature comforts and a smooth ride, but also impressed with exceptional all-terrain capability, thanks to a four-wheel drive system with low range and a lockable centre diff.

Frankly, the Discovery was a bit too wafty and top-heavy on the open road, while performance was pedestrian. But it could conquer seemingly impassable terrain with a cavalier ease that made it the darling of those seeking a comfortable family commuter also capable of tackling the rough stuff – or vice versa!

Fast-forward almost two decades, and I find myself at the helm of the latest, fifth-generation Land Rover Discovery. And my, how things have changed!

Utilitarian is no longer a word you’d use in the context of the new Disco. Luxurious, yes. And stretch-out spacious, with a third row of seats that fold away neatly, leaving a huge, flat-floored luggage area. The vehicle is huge, too: just 30mm short of 5m long, and 1.85m tall.

Yes, it’s an imposing beast – an all-terrainer that’s swapped its predecessors’ mud-spattered boots for polished brogues, their denims and khakis for collar and tie. This particular model is the top-of-the-range Si6 HSE Luxury, which means it has all the latest tech, and every conceivable bell and whistle.

Compared to the chunky, angular styling of all the previous Disco models, the newcomer presents a softer, more rounded – and dare I say it, more bloated – look. That’s especially prevalent at the rear, where the Disco’s bulbous derrière inevitably polarises opinion.

It tends to emphasise the rear overhang, and the prominent C-pillar, in a way that won’t be to everyone’s taste. The offset rear number plate is a Discovery hallmark, but somehow it disturbs the big SUV’s visual balance in its execution here.

The front-end is pure new-generation Land Rover/Range Rover, with an emphatically slanted grille, slim LED headlights with signature daytime running lights, and a businesslike aluminium scuff plate. Vertical air intakes on either side of the grille add further visual oomph.

In profile, the fact that this example’s 20-inch wheels look relatively humble underscores the Landy’s sheer size and presence. Frankly, it just looks too corpulent, and too fancy-pants smart, to tackle the rough stuff. But then, never judge by appearances alone …

If anything, the interior supports this initial view. It’s every millimetre modern-day luxury SUV meets VIP lounge: from the wood inlays and aluminium detailing to the plush upholstery and thick carpeting.

There’s plenty of tech, too: the switchgear is almost bewilderingly comprehensive, mixing analogue dials and chunky, tactile-friendly controls with a swishy, full-colour touchscreen.

The latter serves as an intuitive control centre for many of the Discovery’s functions and features, including the on-board satnav, the entertainment system, Bluetooth-driven telephony, online connectivity, and more.

Of course, the Discovery’s elevated ride height not only benefits off-road capability. It also ensures that driver and passengers enjoy a commanding view of their surroundings, adding to the beefy SUV’s regal character.

This particular example is at the dearest end of the Discovery pecking order: the Si6 HSE Luxury is the flagship, eschewing the more raucous (but arguably more popular) Td6 turbodiesel for a 3.0-litre petrol V6, with a supercharger adding extra zest.

Linked to a slick eight-speed auto gearbox with low-range transfer case, as well as electronically controlled all-wheel drive, the engine has the muscle and refinement to offer both swift open-road dynamics and effortless low-speed tractability, almost regardless of terrain.

Indeed, as the Land Rover folk will eagerly point out, the Discovery is a genuine off-roader, and it will comfortably traverse terrain you wouldn’t want to tackle on foot, let alone on four wheels. Clinging sand, river crossings, sticky mud, rocky inclines … the Discovery does it all, and then some.

Terrain Response, which allows drivers to dial in a set of drivetrain presets based on the conditions encountered, ensures that even less proficient off-roaders have a good chance of conquering the most daunting obstacles, although there’s ultimately no substitute for skill and experience …

Does its prowess off the beaten track compromise the latest Discovery’s on-road capability? Not at all. At near as dammit to 7sec dead for the 0-100km/h dash, it’s quick for something as big, and weighing in at over two tons.

And it feels more composed than expected, too, with less body roll than its combination of height and mass might suggest. It’s not exactly agile in the handling department, but wieldy enough to approach corners with confidence.

The steering has some of that vagueness that comes with a slightly overassisted system, but in this context, the ease of turn-in is more important than ultimate feedback. And it’s accurate enough to make slow traverses over 4×4 terrain (or the challenge of a tight parking spot) child’s play.

But the Discovery feels at its very best as a cross-country express, hauling a full load of occupants and luggage over extended distances, and shrugging off whatever conditions it may be faced with. From smooth highways to pockmarked rural tar, from gravel passes to farm tracks, the Disco remains unruffled.

More than its extreme, low-range off-road prowess, it’s that talent for outright versatility that is the fifth-generation’s strongest recommendation. In fact, I’d wager that 4×4 capability is fairly low on any current-day Discovery buyer’s priority list – especially when it rides on shiny 20-inch alloys and low-profile, road-biased rubber.

Ironically it also means that the Discovery misses its original raison d’etre – to fit in somewhere between Defender and Range Rover. The new Discovery is more Range Rover than Land Rover in execution, technology and price than any of its predecessors.

Does that leave space for something new? Well, one could argue that the Discovery Sport now fills that niche, even though it lacks low-range. It’s certainly more affordable. But in reality, it’s more Discovery Lite than Discovery Sport.

Rumour has it that the successor to that most quintessential Land Rover of them all, the illustrious Defender, will no longer be the rough and ready, gung-ho, conquer-or-be-damned vehicle its forebear proudly was.

Instead it’s likely to offer a more balanced mix of uncompromising 4×4 and civilised all-terrainer, with a healthy dose of advanced technology mixed in. Whether that will fill the original Discovery’s boots in the process remains to be seen …

For now, though, those families intent on exploring remote destinations along routes less travelled may well opt for more utilitarian, less advanced but similarly capable off-roaders such as the Nissan Patrol, Jeep Grand Cherokee or Toyota Land Cruiser. DM

Spacious, advanced and luxurious. Excels in all conditions.

No longer a gung-ho 4×4 first and foremost.