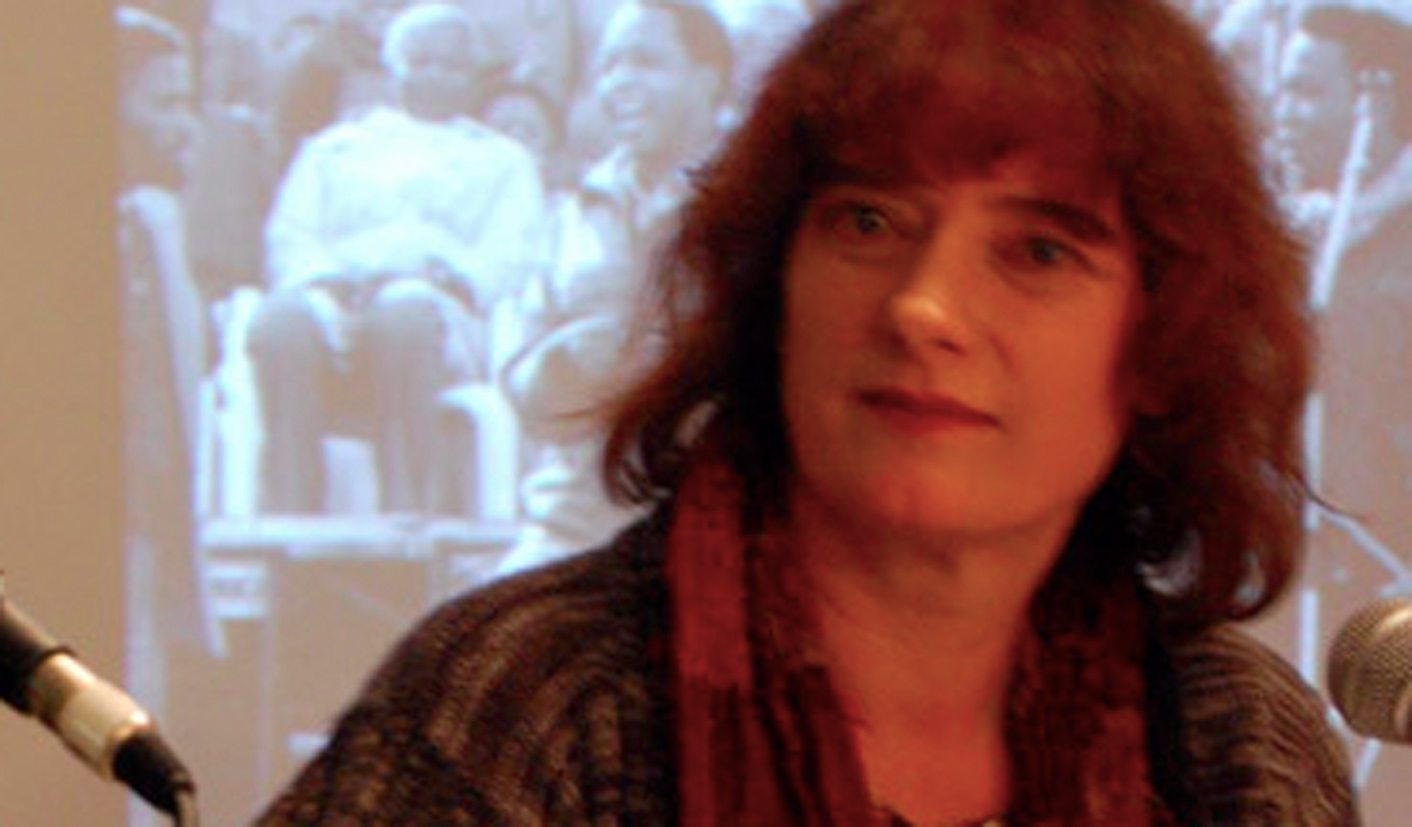 Dulcie September was a schoolteacher. She didn’t approve of those who didn’t finish their homework. In many ways, activist and investigative journalist Evelyn Groenink’s detailed quest to find the truth behind the assassination in 1988 of Dulcie September, the then banned ANC’s representative in Paris, SWAPO activist Anton Lubowski in 1989 and MK commander Chris Hani in 1993, is a bid to complete a task she set out to accomplish almost 30 years ago. Groenink, once a member of the influential Dutch Anti-Apartheid Movement and the Dutch Communist party, is married to former deputy SARS Commissioner Ivan Pillay, who is currently being targetted by the NPA. By MARIANNE THAMM.

In spite of it all, Evelyn Groenink remains an idealist and an optimist.

In the almost 30 years that she has attempted to unravel the riddle of the brutal murder of Dulcie September as the 52-year-old former schoolteacher from Athlone unlocked the ANC office on the Rue des Petites-Ecuries in Paris on the morning of March 29, 1988, Groenink has encountered traces of ruthless, unprincipled and calculated killers with dark hearts and who do not serve the interests of humanity.

Big Business, Big Oil and Big Arms are all implicated.

Standing in their way are those who are incorruptible, like September, who had to be eliminated.

September was the ANC’s representative for France, Luxembourg and Switzerland and had operated in Europe since 1983. One of her tasks in this position was to lobby for sanctions – including the trade of arms – with apartheid South Africa. September was killed, Groenink found, because she had uncovered something significant to do with an impending nuclear deal.

In a world that appears to have slipped off its axis, we need today, more than ever, individuals who are fearless and who can stand up to those who seek to corrupt, plunder, destroy and murder in the interests of shady international political and business elites and the criminals who enable them.

After more than 20 years of democracy, South Africa finds itself again at a crossroads as the extent and depth of State Capture under President Jacob Zuma’s watch as well as the wholesale betrayal of the ideals of the Struggle for liberation becomes sickeningly evident.

Ironically, in 1988, the same year that September was murdered, the ANC’s highly secret Operation Vula, aimed at smuggling the movement’s leaders, including members of the NEC, into South Africa, swung into action after it was launched in 1986 under the direct command of Oliver Tambo.

Members of Operation Vula included Ronnie Kasrils, Ivan Pillay and Pravin Gordhan. While Jacob Zuma is often erroneously linked to the operation he was not part of it.

Groenink arrived in Cape Town for the launch of her book Incorruptible – The Story of the Murders of Dulcie September, Anton Lubowski and Chris Hani a week after Pillay and fellow former SARS colleagues Johan van Loggerenberg and Andries Janse van Rensburg had been served by the NPA with a J175 summons for a recycled criminal case originally lodged by embattled SARS commissioner Tom Moyane in 2015.

Pillay and former SARS commissioner and finance minister Gordhan have been at the forefront of the fightback against State Capture by Zuma and his cronies (particularly in relation to tax evasion) and have paid dearly for their principled stance. Gordhan has been relentlessly hounded by the Hawks and the NPA, fired, rehired and fired, even accused of plotting with Western powers.

Pillay too has been targeted, even more so in the aftermath of Zuma’s resignation and Pillay’s rumoured possible return to a now decimated and battered SARS with Moyane at its helm.

Is this Operation Vula reloaded?

“Ha, Operation Vula was underground,” says Groenink. “Now there is mass support and it is out in the open. People have really come together and are doing the right thing.”

In this, the year in which South Africa celebrates Nelson Mandela’s centenary, it is time, said Groenink, to find the heart of “Mandela’s ANC”.

Zuma, says Groenink, did not embody these values.

“He rejected people. He oppresses women, he racially polarises people. He speaks out against those who are not Zulu. His ideology is completely divisive. The thing about Mandela though is, while he did say we must forgive, he did not say the status quo should remain.”

Over the years, says Groenink, she has learnt in politics that it is the people with the sharpest elbows who get into power and that sometimes even former comrades can betray an ideal.

“Nothing is simple and clear-cut. I learnt that there are activists and there are activists. I understood only much later that things can be complicated and not as they seem. I wasn’t a journalist when I started out with this investigation. Only later, when I watched episodes of the TV series Columbo, did I realise what I had done wrong and how stupid I had been at the start.”

Immediately after September’s death, Groenink had originally believed that it surely was a no-brainer and that apartheid death squads and the notorious Civil Co-operation Bureau had to be responsible for eliminating her.

But the deeper she probed, the more she began to suspect that this line of thought had been deliberately set up by the real killers who she suspected were linked to French military intelligence. In those years of sanctions against apartheid South Africa it would have been more than an embarrassment for the French government to be caught out trading arms with the white minority regime.

Later, when Groenink investigated the murder of lawyer and SWAPO activist Anton Lubowski in Windhoek in 1989, and came across the name of French arms trader Alain Guenon, she was able to trace a line back to Dulcie September’s murder.

There were, she began to understand, very powerful geopolitical stakes in the world of arms dealing. So much so that those who peddle them are often ahead of the curve and in 1988 already understood that new political winds in South Africa would soon be blowing.

If the arms traders were to keep on doing business, they would need also to cultivate people in the liberation movement, people who would later find themselves in positions of power and influence.

And of course it came to pass, with the original sin of post-apartheid South Africa – the arms deal.

In his retirement, former President Jacob Zuma will finally have to face (we hope) eight charges and 783 counts of corruption, fraud and racketeering relating to exactly that deal.

Chris Hani’s murder – Groenink found – was just as puzzling as the assassinations of September and Lubowski. And in spite of the generally accepted narrative that it was Polish national and right-wing extremist Janusz Walu? who had been Hani’s killer, Groenink’s investigation convincingly counters this assumption.

Groenink uncovered that SAPS buried the evidence of three witnesses who saw another murderer aside from Walu? and how the state’s “brave” star eyewitness had in all likelihood not even been present when the MK hero had been murdered.

So, how do we, in a world that appears to be in thrall to and succumbed to the atavistic forces of power and money, find a better way or learn to fight back?

We can begin, of course, by being inspired by the lives of those who are fearless, like September, Lubowski and Hani (and many others), and also learn never to take freedom for granted.

The snag of course is that while all three of the subjects of Groenink’s book were indeed incorruptible, they did end up dead.

We speak of the many whistle-blowers in South Africa over the past few years, some known, many whose identities will never be revealed, who are the real heroes of the pushback against State Capture and endemic corruption across the public and private sector.

And we speak also of the ordinary people who have been killed, many in KwaZulu-Natal in the ANC’s toxic factional battles.

“Well, that is the sadness. They (September, Lubowski and Hani) stood in the way of something.”

“Your husband is standing in the way of something,” I venture to suggest.

“Well, yes, we are a bit afraid. But it is also a difficult choice for the would-be assassins. It would be pretty obvious who is behind it,” says Groenink.

Groenink says she hopes her book as well as works like Crispian Olver’s How to Steal a City will contribute to a push that will lead to greater transparency all round.

“In Johannesburg I was very happy that my book was launched at PARI (Public Affairs Research Institute) where executive director Ivor Chipkin has expressed specifically that there must not be murky powers that do things that we can never find out. He identified them as arms traders, military and the secret services as well as the intersection between politics and criminality.”

And while the world will ever be a Utopia – the place Groenink as a young communist may have dreamed of – “we know a lot more about how things work than people did in the time of the Kennedys, for example. Things do get revealed more. Investigative journalists are killed more, which is terrible, but there were no investigative journalists around at the time of the murder of Kennedy.”

It has been a mighty struggle for Groenink to get her book published in South Africa. She completed the manuscript in 2001 but in spite of the enthusiasm by local publisher Jacana the threats from those named, including former apartheid foreign minister Pik Botha, proved too dangerous.

Jacana partner Maggie Davey, in her 2009 Ruth First Memorial Lecture, explained how in the mammoth task of fact-checking Groenink’s book and offering a right to reply to those named, the publisher was threatened with closure.

“When the replies started coming in, they were invariably from lawyers. Some respondents however chose to contact us directly. We were liars, “cabbages”, crooks, fifth columnists, quislings and publishers of recherché information that would only be of interest to other crooks, ‘cabbages’ and quislings,” said Davey.

She noted how the founder of “one of the biggest private suppliers of soldiers to the Iraq war, and a competitor of Blackwater and Haliburton”, had called her “out of the blue. In a calm and reasonable manner, he threatened us with a legal action which would close us down, were Evelyn’s contentions ever to be published.”

In the end Evelyn has self-published her book with Jacana acting as the local distributor.

We part with Groenink offering advice that her stepfather – a banker – with whom she vehemently disagreed, once told her when she was a “young communist”.

“Dulcie was a schoolteacher who hated unfinished homework,” says Groenink with a smile. DM