Some 74,000 years ago, Mount Toba exploded. Our ancestors survived a long, volcanic winter 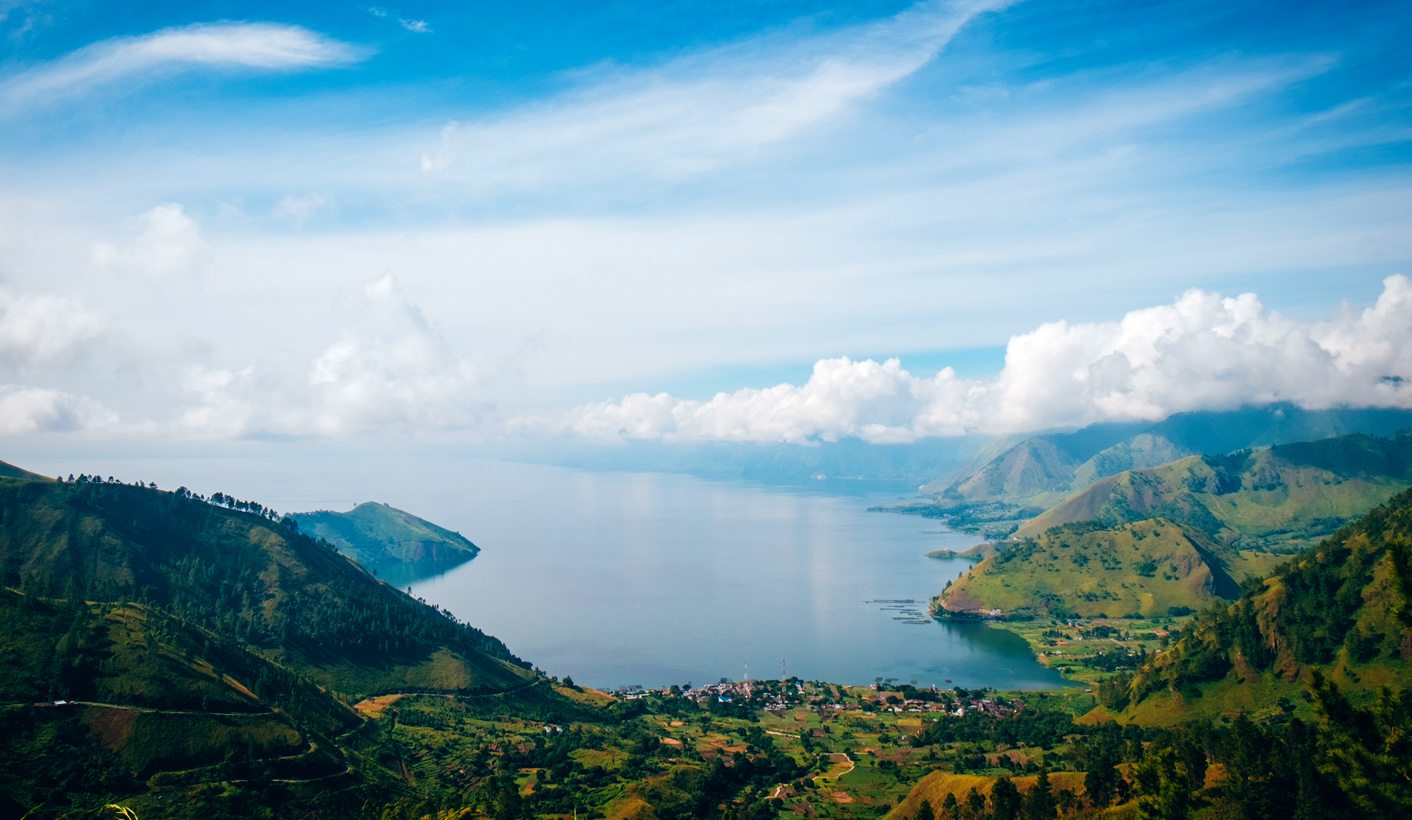 The Mount Toba catastrophe is one of the world’s most notorious: it caused a six- to 10-year volcanic winter and a 1,000-year cooling period, and has been blamed for the near-extinction of humans. A new study finds that at least one population of humans survived on the coast of South Africa. By MARELISE VAN DER MERWE.

South Africans worried about prolonged drought may take heart: our ancestors, at least, were made of sterner stuff than one might expect when it came to surviving unforgiving climates.

In a new paper published in the journal Nature, scientists argue that in the years following the eruption of super-volcano Mount Toba in Indonesia, around 74,000 years ago, early modern humans on the south coast of South Africa were the unlikely survivors of extremely frigid conditions.

Mount Toba is known as one of the world’s greatest super-eruptions which caused a six- to 10-year winter and an approximately 1,000-year cooling period on Earth. Super-volcanoes can cause as much destruction as an asteroid more than a kilometre wide.

The Mount Toba catastrophe has previously been blamed for the near-extinction of humans, though this idea was dismissed by later studies that called the theory “simplistic”. The scientist who said this – Dr Christine Lane – also worked on the new study.

Calling Toba a “massive environmental disaster”, the authors of the new paper say they have managed to find evidence of survivors of the “devastating” volcanic winter on the southern coast of South Africa.

“The scale of the ash-fall alone attests to the severity of the environmental disaster,” the Institute of Human Origins at Arizona State University said in a statement on Monday. Huge quantities of aerosols injected high into the atmosphere would have severely diminished sunlight, with estimates ranging from a 25% to 90% reduction in light. This would probably have caused plant die-off, and there is evidence of significant drying, wildfires and plant community change in East Africa after the Toba eruption, the study says.

“Imagine a year in Africa that summer never arrives. Flowers do not bloom. Trees die in the winter. Large mammals like antelope become thin, starve and provide little fat to the predators – carnivores and human hunters – that depend on them. Then, this same disheartening cycle repeats itself, year after year,” the institute added.

A similar phenomenon, though on a smaller scale, occurred during the year without summer in 1816. This was due to climate abnormalities that caused major food shortages across the Northern Hemisphere, thought to have been caused by an eruption some 100 times smaller than Mount Toba – that of Mount Tambora, also in Indonesia, in 1815. It caused crop failures in Eurasia and North America, famine and mass migrations.

“If Mount Tambora created such devastation over a full year – and Tambora was a hiccup compared to Toba – we can imagine a worldwide catastrophe with the Toba eruption, an event lasting several years and pushing life to the brink of extinctions,” the university said.

“The effect of Mount Toba, a super-volcano that dwarfs even the massive Yellowstone eruptions of the deeper past, would have had a much larger, and longer-felt, impact on people around the globe.”

The study authors believe survival was possible along the coastline of southern Africa, perhaps because of the uniquely rich food regime in the area.

So how did our ancestors survive? In Indonesia, the source of the destruction would have been fairly obvious to its victims, the researchers say – though they would have been killed by it almost immediately. In Africa, however, it would have been unclear why there was such a sudden, devastating change in weather.

“Famine sets in and the very young and old die. Your social groups are devastated, and your society is on the brink of collapse,” the statement said.

“The effect of the Toba eruption would have certainly impacted some ecosystems more than others, possibly creating areas – called refugia – in which some human groups did better than others throughout the event.

“Whether or not your group lived in such a refuge would have largely depended on the type of resources available. Coastal resources, like shellfish, are highly nutritious and less susceptible to the eruption than the plants and animals of inland areas.”

To determine that anyone had survived at all, the researchers studied a rock shelter called Pinnacle Point 5-6 near Mossel Bay, where they found an unusual shard of volcanic glass. Encased in that shard is a distinct chemical signature – a fingerprint that can be used to trace it to the eruption.

They then analysed the glass alongside remains of human rubbish that they found nearby, which evidenced human populations surviving at the same time.

“When the column of fire, smoke and debris blasted out the top of Mount Toba, it spewed rock, gas and tiny microscopic pieces (cryptotephra) of glass that, under a microscope, have a characteristic hook shape produced when the glass fractures across a bubble. Pumped into the atmosphere, these invisible fragments spread across the world,” the statement explains.

Panagiotis (Takis) Karkanas, director of the Malcolm H. Weiner Laboratory for Archaeological Science, American School of Classical Studies, Greece, saw a single shard of this explosion under a microscope in a slice of archaeological sediment encased in resin.

“It was one shard particle out of millions of other mineral particles that I was investigating. But it was there, and it couldn’t be anything else,” says Karkanas.

The shard came from an archaeological site in Pinnacle Point 5-6. The sediments dated to about 74,000 years ago.

“Takis and I had discussed the potential of finding the Toba shards in the sediments of our archaeological site, and with his eagle eye, he found one,” explains Curtis W. Marean, project director of the Pinnacle Point excavations. Marean is the associate director of the Institute of Human Origins at Arizona State University and honorary professor at the Centre for Coastal Palaeoscience at Nelson Mandela University.

Marean showed the shard image to Eugene Smith, a volcanologist with the University of Nevada at Las Vegas, and Smith confirmed it was volcanic.

In their paper in Nature, the team describes finding these shards in two South African archaeological sites, tracing those shards to Toba through chemical fingerprinting and documenting a continuous human occupation across the volcanic event.

“Many previous studies have tried to test the hypothesis that Toba devastated human populations,” Marean says.

“But they have failed because they have been unable to present definitive evidence linking a human occupation to the exact moment of the event.”

The authors say they were interested in finding the archaeological data needed to show the impact of Toba on humans, rather than whether it caused environmental change.

The Pinnacle Point team are confident regarding the accuracy of their cross-referencing. They measure everything on site to within millimetres using a “total station”, a laser-measurement device integrated to hand-held computers to minimise errors.

Naomi Cleghorn, with the University of Texas at Arlington, recorded the Pinnacle Point samples as they were removed.

“We collected a long column of samples – digging out a small amount of sediment from the wall of our previous excavation. Each time we collected a sample, we shot its position with the total station. We could then precisely compare the position of the sample to our excavated cultural remains – the trash ancient humans left at the site,” she says.

“We could also compare our cryptotephra sample position with that of samples taken for dating and environmental analyses.”

In addition to understanding how Toba affected humans in this region, the study has other implications for archaeological dating techniques, the researchers believe. Archaeological dates at these age ranges are imprecise – 10% (or thousands of years) error is typical. Toba ash-fall, however, was a quick event that has been precisely dated. The time of shard deposition was likely about two weeks in duration. This means they can the new discovery can be used to cross-test other sites and dating systems, they say.

“We found the shards at two sites,” says Marean. “The Pinnacle Point rock shelter, where people lived, ate, worked and slept, and an open-air site about 10 kilometres away called Vleesbaai. This latter site is where a group of people, possibly members of the same group as those at Pinnacle Point, sat in a small circle and made stone tools. Finding the shards at both sites allows us to link these two records at almost the same moment.”

Then there are the dating techniques they say can be checked against the Toba event. People lived at the Pinnacle Point 5-6 site from 90,000 to 50,000 years ago, it is believed. Zenobia Jacobs, with the University of Wollongong, Australia, used optically stimulated luminescence (OSL) to date 90 samples and develop a model of the age of all the layers. OSL dates the last time individual sand grains were exposed to light.

“There has been some debate over the accuracy of OSL dating, but Jacobs’ age model dated the layers where we found the Toba shards to about 74,000 years ago – right on the money,” says Marean. The authors believe this lends support to Jacobs’ approach to dating, which she has applied to various sites.

The authors say they would like other research teams to use their methods and apply them to sites elsewhere in Africa to see if this was the only population to survive the “devastating” aftermath of Mount Toba. DM

Photo: Today, the caldera of a supervolcano is a large natural lake, Toba (Photo by Hanny Naibaho on Unsplash)