Op-Ed: Somaliland – between Democracy and Prosperity 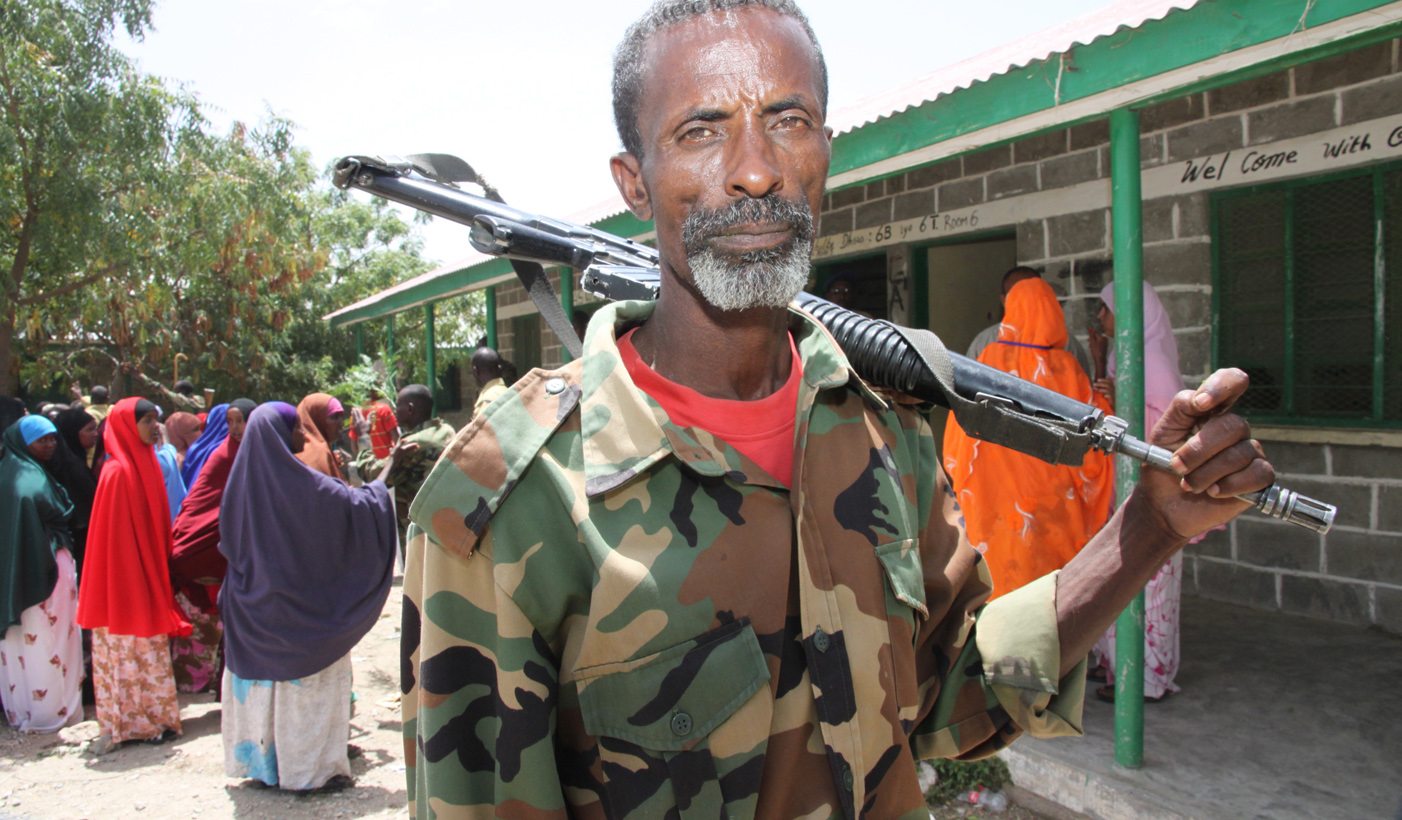 Democracy helps keep things together, and radicalism in check, in Somaliland. Democracy in this Muslim country also has to be implemented in an environment beset by poverty, and where Islamic radicalism is an attractive alternative for some. By GREG MILLS & JACO-LOUIS DU PLESSIS.

“I’ll give you 15 camels,” said Caqil Tayib, a big grin on his face. The “offer” by the camel trader was for the chief protocol officer of Somaliland’s Minister of Foreign Affairs. We managed to raise the price to 150, honour being satisfied all round amid much laughter in Hargeisa’s Qudhac Dher market, equivalent to a sum over $100,000.

Camels are a critical commodity for Somaliland, the former British Somaliland to Somalia’s north. They are not only used as dowry, but to settle disputes and the main source, other than diaspora remittances, of income in the dry, dusty and hitherto diplomatically unrecognised land.

Somaliland originally achieved independence from Britain, which had ruled it since the 1880s, on 26 June 1960, the former Italian Somaliland following suit five days later when the two territories united to form the Somali Republic on 1 July 1960. A third “Somali star”, French Somalia, now Djibouti, achieved independence from Paris in 1977. The fourth and fifth purported stars of Somali inhabited territory in Kenya and Ethiopia (the latter known as the Ogaden or, today, Region Five) never acquired independence, forestalling the ambition of a wider Somalia. Having borne the brunt of the Somali dictator Mohamed Siad Barre’s violence against insurgents and dissidents, the Somali National Movement (SNM) and clan elders agreed that Somaliland (re)declare its independence.

In the centre of the capital, Hargeisa, is the 18 May independence memorial, comprising a Mig-17 fighter-bomber erected on a plinth. This commemorates the event when, having lost control of the province, Siad Barre ordered his air force, operating from the local airport, to bomb the city briefly captured by SNM fighters in May 1988, resulting in many thousands of civilian casualties. By the time of Siad Barre’s fall three years later, not for nothing was Hargeisa known as the “roofless city” after systemic bombing and looting by Siad Barre’s forces had stripped it of roof sheeting and even doors and their frames.

Since then the former British protectorate has developed a stable, democratic system of politics, merging modern and traditional elements, including an elected president and House of Representatives as well as an Upper House of Elders (guurti), securing the support of clan-based power structures. The commitment to democracy is evident in the staging of local elections in 2002, presidential elections in 2003, 2010 and 2017, and parliamentary elections in 2005.

Democracy helps keep things together, and radicalism in check, in this Muslim country. As one (Western) government security official has noted, “Somaliland is pretty good in terms of the necessary combination of political will, capacity and ability, and human rights to fight terrorism. In fact, it’s probably the best place to operate globally in this regard.”

Somaliland’s democracy was built on five major internal meetings, starting with the Grand Conference of the Northern Peoples in Burao, held over six weeks and concluding with the declaration of Somaliland’s independence from Somalia on 18 May 1991.

The declaration was signed in an octangular tin-roofed building near the colonial governor’s building, without electricity and running water, the white walls outside still pock-marked by bullet holes. Five hours’ bumpy driving away from the capital Hargeisa, Burao has one of the largest livestock markets in eastern Africa, commerce further fuelled by remittances and its status as the second largest city in Somaliland, its population having swelled from 70,000 in 1991 to 450,000 in the last two decades.

Peace conferences in Burao and, later, Borama, were managed and financed by locals, bringing their own food and shelter. As such these events were bottom-up rather than top-down, unlike Somalia’s, which has been top-down, driven by donors through leadership and which have largely taken place outside the country. Somalilanders concentrated on achieving peace, not on acquiring financial rents for delegates from the process, a feature which has continually by contrast blighted Somalia’s attempts to the south, where conflict entrepreneurs have fed off both the fighting and the talking.

The last conference in Borama in 1993 was held in the region of then governor Abdirahman Ahmed Ali, taking place over five months “under the trees”.

“This type of dialogue was not new to us, as from time immemorial, from before the colonial period, Somalilanders,” says Ali, “had their own reconciliation process, and when government institutions failed, these traditional measures took over once more.”

In 2002, Somaliland made the transition to multiparty democracy. The 2003 presidential election was won by Dahir Riyale Kahin by just 80 votes in nearly half a million from Ahmed Mahamoud Silanyo. The tables were turned between the two in 2010, with former Somaliland National Movement fighter Muse Bihi Abdi being elected in 2017, receiving 55% of the vote.

Critics say that Somaliland’s democracy has been facilitated by the dominance of a single clan, the Isaaq, unlike Somalia, which has to balance the competing interests and ambitions of four major clans and several smaller ones. But this understates the differences between the Isaaq’s sub-clans and sub-sub clans, ignores the internal violence that accompanied the birth process, which had to be resolved, and overlooks the tremendous hard work that went into it. And as President Muse Bihi Abdi contends, it also underestimates the impact of the democratic culture of the SNM.

“For 10 years,” he says from his modest offices in Hargeisa, “the SNM was struggling for democracy, refusing the dictatorship of Siad Barre. The democracy we now have was also based on the constitution of the SNM, which was very democratic, in which there were regular elections every two years, and in which the central committee operated like a parliament.”

He reminds that the SNM changed its chairman five times democratically, sometimes through a handful of votes among its 250+ delegates.

“As Somalilanders we have never had a political dynasty. In the SNM we changed leaders more times than most African countries have changed government in their lifetimes,” he observes.

“At the end of the Borama conference we dismantled the SNM entirely. It was in its constitution to transfer power in two years after the advent of peace. There were lots of challenges to this in the SNM. But if we did not do this,” says the former Colonel in Siad Barre’s army who defected to the SNM, “we would not have fulfilled our promise. We did not want to create leaders like [Uganda’s Yoweri] Museveni or [Eritrea’s Isaias] Afwerki, who stay a long time.”

He cites the example of former president Silanyo who was removed in the 1989 SNM elections, and yet accepted the change.

“We have a tradition of accepting results and changing power, and accepting leadership even outside of the SNM, which is very unusual among African liberation movements,” he points out.

“So when we achieved our victory, the basis of all of our discussions was around how to create a democratic government. When we went to Bomora after two years of peace, we elected a president who was not even a member of the SNM – Mohamed Egal. We all agreed that he was the best man for the job, given he had been prime minister of Somalia and had the necessary statecraft. Of all of the candidates, he had the capacity to solve the clan conflicts. We also used the clan elders positively through the Guurti to maintain peace. In managing the conflicts through Egal, the SNM and the Guurti, we laid the foundation for our democracy.

“Of course, we still have tension in our system over which is more powerful: the clans or our democracy. This is why we still have the two systems, the one elected and the other traditional. But it’s still a challenge as to whether the Guurti will accept democracy altogether, and the erosion of their power.”

This is changing along with the demographics of Somaliland, with 70% of the population under the age of 30.

“They prefer democracy,” the president notes, “and see the traditional clan system as old-fashioned.”

Democracy has also to be implemented in an environment beset by poverty, where Islamic radicalism is an attractive alternative for some.

The Somaliland government budget was just $152-million in 2014. GDP is estimated at $350 per capita annually for its 3.5-million people. Without international recognition, which the president describes as an “affront”, donor funding is just $120-million annually, most of which goes into roads and water infrastructure, and much of the rest into boosting agriculture.

This situation has been worsened by the paucity of skills and its lack of trade opportunities. The formal youth unemployment rate is 75%, while the rate of literacy is under 45%, and just 20% for women. Outside of remittances, Somaliland depends on its sale of sheep, camels and goats, though this has suffered with a Saudi import ban.

By comparison, European Union spending in Somalia has been as high as €25-million each month, and the country remains at war. Ironically, to date the route to reclaiming Somaliland’s independence lies through Mogadishu, in getting its southern neighbour to agree to a divorce; but the Mogadishu government is barely functional, little more than a Western-supported and African-military controlled client state.

Somaliland politicians are understandably frustrated that, despite their record of democracy and self-sufficiency, they remain unrecognised by the international community.

“We cannot eat democracy,” goes the refrain. At the same time, that recognition is not going to come from charity or even legal arguments, but the self-interest of others.

Hargeisa has, unlike its southern neighbour, laid the basis for conflict resolution and stability, in a system which works. The challenge now is to use this foundation to develop the economy, thereby creating a tangible stake in Somaliland’s success. DM

Dr Mills and Du Plessis are with the Brenthurst Foundation, and have been in Somaliland.