Listeriosis: Vendors struggle to maintain standards in a time of drought 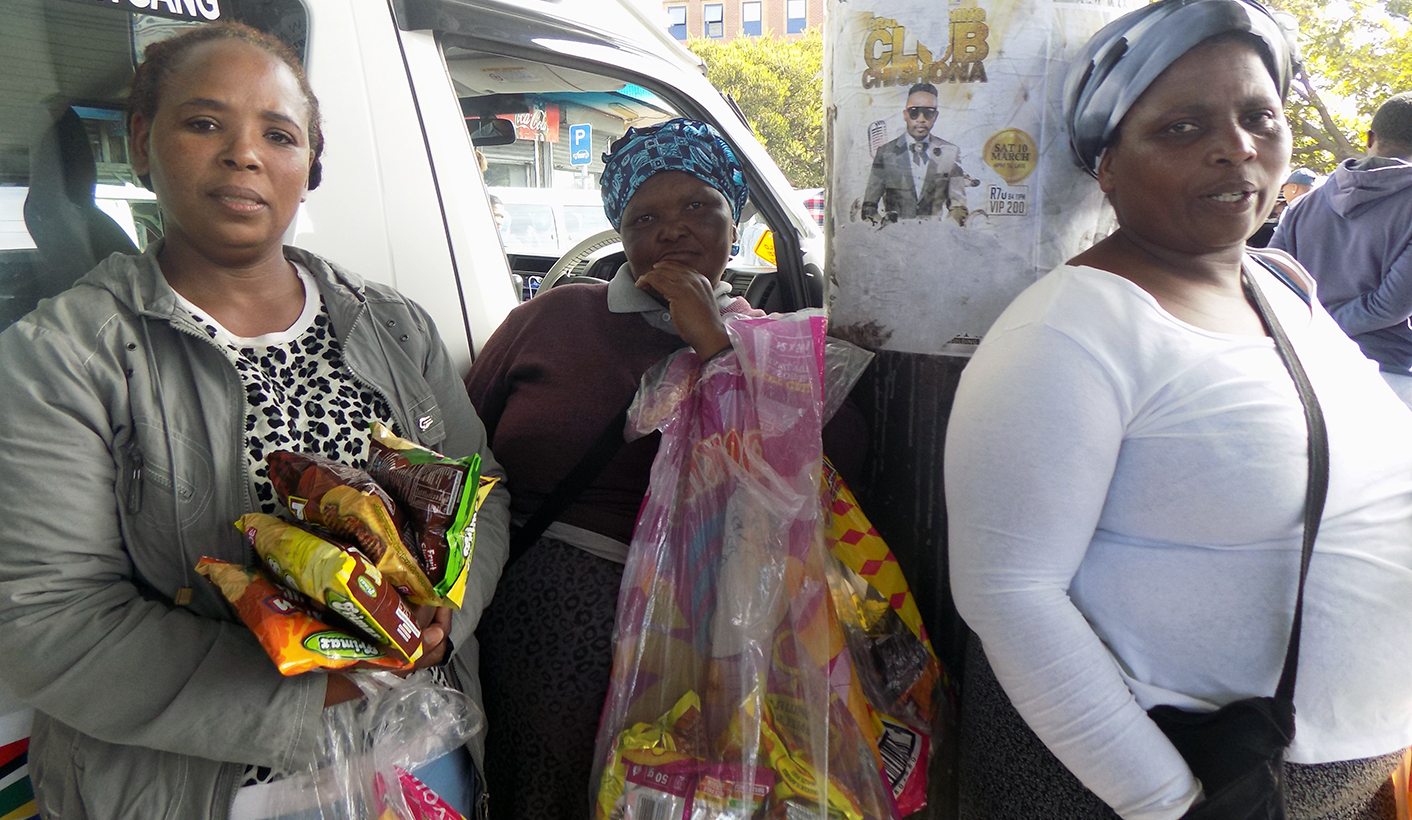 Some vendors have raised concerns about how they are to prevent the spread of listeriosis with limited access to water in a time of drought. This follows a visit by MEC for Health in the Western Cape, Nomafrench Mbombo to the Wynberg Taxi Rank to raise awareness about the disease to commuters, food vendors and food shop personnel. By HLUMELA DYANTYI.

Daphney Mafuxwane, a food vendor from Mfuleni who works at the Wynberg taxi rank, described the daily struggle for water to Daily Maverick. “Ever since they announced the drought, that’s when we got affected the most because they started closing the taps in the toilets. We can’t drink water, we can’t wash our hands. If you want to use the toilet you have to pay R2 or you have to purchase a train ticket to use the toilets inside the train stations. Those toilets are dirty. They said they would give us hand sanitiser yet sometimes it’s not available and you leave the toilets with dirty hands.”

Mafuxwane’s concerns were echoed by other food vendors who felt that the water crisis hugely affected their businesses – aggravated by the recent outbreak of listeriosis.

Listeriosis is a disease formed by eating foods that are contaminated with bacterium Listeria monocytogenes. The source of the current outbreak that to date has killed 180 people was recently pinpointed to the Enterprise Food production facility located in Polokwane.

Vendors said people in many communities were misinformed about the disease as they thought it could only be contracted through the consumption of polony and not from other foods, surfaces, water and soil.

During her visit to the Wynberg taxi rank, Western Cape Health Minister Nomafrench Mbombo explained that there was a lot of confusion the disease.

“They say ‘no polony, no I’m done selling it’. But there is more to the disease than just polony,” she said.

Photo: Listeriosis pamphlets were handed to vendors by the Western Cape Department of Health team in their Listeriosis Awareness Drive at the Wynberg Taxi Rank on 9 2018.

Handing out pamphlets at the rank, Mbombo advised vendors to ensure that the surfaces they prepare their foods on are clean.

The pamphlets she handed out on Friday encouraged commuters and vendors to eat freshly cooked meals and to not refrigerate leftovers and heat them up the next day, especially vendors who then sell those products to the public.

The vendors said most people who buy fruit from them just wipe it and eat it without washing it because of the limited access to water at taxi ranks. The vendors further explained that even people who carry 500ml water bottles from home usually use the little amount of water they have for drinking purposes only and not to wash their fruit.

The daily life of most food vendors requires the use of water. Mafuxwane said: “It’s better for those who sell chips and sweets or cigarettes but what about the ones who sell fruits, or , how must they rinse their fruit? How must they prepare the food so it’s clean like she (provincial Minister Mbombo) says?”

“The government denies us internships because we’re over 35 so we end up working here to feed our children, then again they deny us water. What must we do?” said Mafuxwane.

Mafuxwane said while she found the minister’s visit helpful as it educated her and many others about listeriosis, she found it contradictory as she would not be able to use all the prevention tips stipulated to her by the minister without access to water.

for Mbombo, Colleen Smart said in response: “The situation at Wynberg is outside of our mandate. It is an environmental health issue and the City of Cape Town should look into it, it is a local government competency.”

Statistics on 2 March showed that listeriosis has claimed 180 lives and 948 laboratory-confirmed cases had been reported to the National Institute of Communicable Diseases.

Mbombo was surprised that people expected to buy fruits and vegetables that were already washed. “It is your duty as the vendor to inform customers to wash their apple or wipe it now with a little water, but when you buy spinach you wash it at ” Mbombo said that only in instances when people buy fruit that they are going to eat immediately do they ask for a little bit of water from the vendor to rinse.

Mbombo suggested a method that she had seen from the previous taxi ranks that she had visited in Bellville, Maitland and Site C, Khayelitsha as part of her campaign. “One (a street vendor) was saying that she has a two-litre kind of thing where the person buys an apple, then they can be able to help themselves and rinse a bit, it saves water.”

Mbombo also added that the Western Cape Health Department encouraged vendors and commuters to be aware of how they prepare their foods at home.

Listeria can grow at low temperatures so South Africans are advised to keep their refrigerator temperature at 4 degrees Celsius. Higher risk foods include unpasteurised milk, soft cheeses, fruits and vegetables, processed foods, ready-to-eat meals and raw and smoked fish products. Citizens are advised to store raw meat below other foods in the refrigerator to prevent them from dripping on to other foods.

Symptoms of listeriosis include fever, tiredness, body aches and sometimes nausea or diarrhoea. The incubation period may vary from six hours to 70 days and people should go to the nearest clinic, day hospital or doctor if they show any symptoms.

Main photo: At a Listeriosis Awareness Drive at the Wynberg Taxi Rank on 9 of March 2018, vendors Daphney Mafuxwane, Ntombenani Godlwana Tukani and Zoleka Nosakhele Magada discuss the challenges of selling food to customers amid a drought in Cape Town. Photos: Hlumela Dyantyi