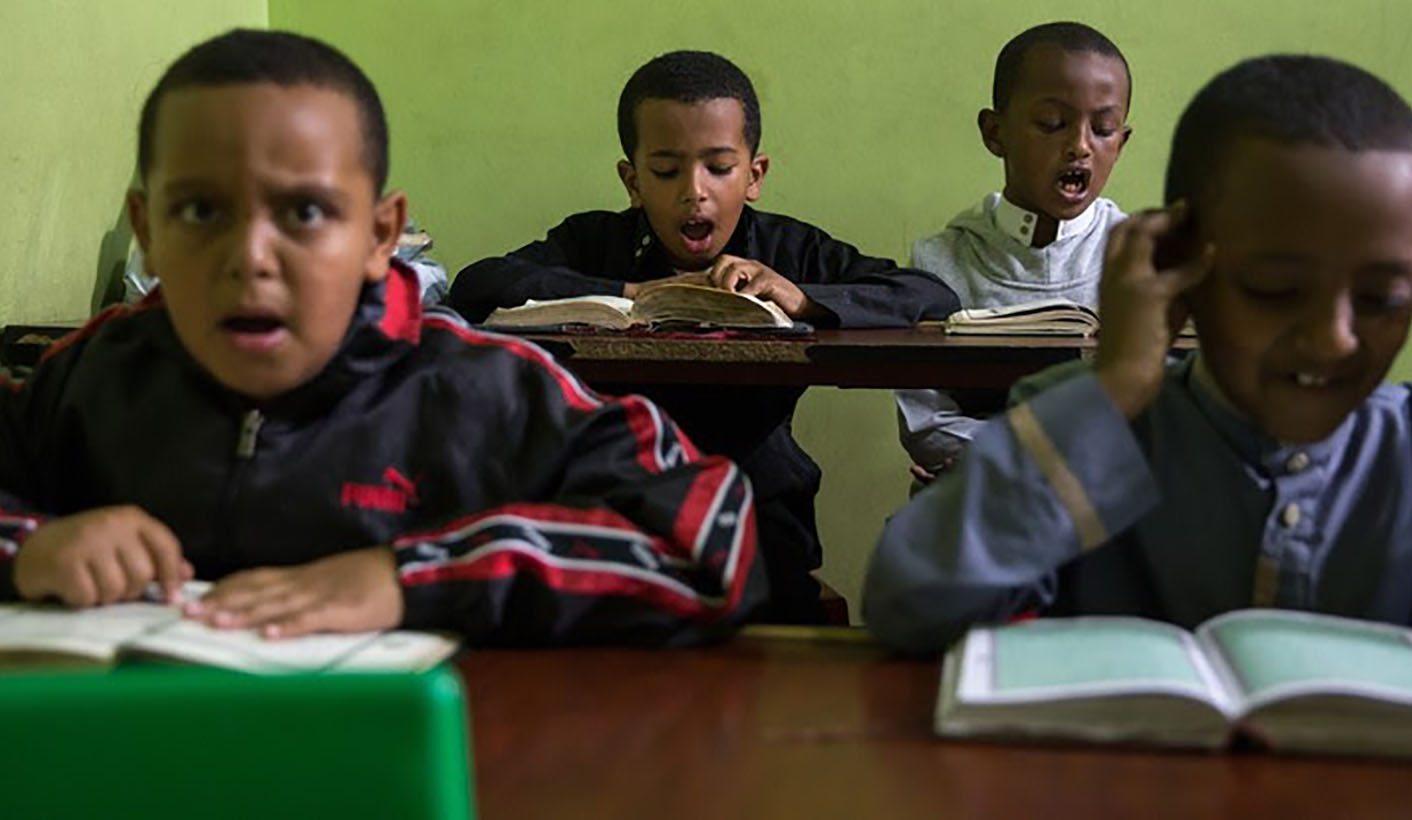 Queues form from early morning at the Desmond Tutu Refugee Centre. By Zoë Postman and Ashraf Hendricks for GROUNDUP.

It’s about 05:00 on a dark Tuesday morning. Hundreds of Ethiopian immigrants jostle to be first in the queue at the Desmond Tutu Refugee Centre in Marabastad, Pretoria. Most have come to renew their asylum seeker documentation; others are new arrivals hoping to apply for asylum seeker status.

When GroundUp arrived, the new arrivals were queuing outside a closed gate and those renewing documents used another entrance on the other side of the building. On the gravel patch outside the centre, vendors began to set up their stalls and make fires. They sold chips, sweets, fruit, cold drinks, samoosas and Ethiopian coffee.

Photo: Hundreds of Ethiopian immigrants stand in line outside the Desmond Tutu Refugee Centre in Marabastad, Pretoria. The new arrivals start queueing from as early as 05:00. Photo: Ashraf Hendricks

Kadir Godana, 26, said he had fled Ethiopia after being imprisoned for almost three years. He said he was arrested because he supported the Oromo Liberation Front (OLF) at a protest. “The Ethiopian government killed my brother and my cousin in a shoot-out because they were part of OLF,” said Godana.

He travelled from Ethiopia to South Africa by hiding in the back of a truck. He paid bribes at about six different borders passing through Kenya, Tanzania, Zambia, Malawi and Zimbabwe.

Since his arrival in South Africa, Godana said, he had been to the refugee centre to apply for asylum seeker documentation about seven times but had never managed to get in.

When GroundUp met him at the centre, he was trying again. He said he would have to pay a bribe. “Everyone knows you have to come here with money otherwise you will never get in,” he said.

Ramadan Kebato, 25, who is Godana’s nephew, has been in South Africa for about two years. He said he had studied sports science and engineering in Ethiopia but had dropped out fearing political persecution from the government.

“I was part of the OLF youth organisation while I was studying. I was involved in the protests and they (Ethiopian government) were targeting the Oromo youth. I was scared for my life so I decided to come here”, said Kebato.

He said he had left his mother, father and sister in Ethiopia, travelling by truck through Kenya, Tanzania, Mozambique to South Africa. He said he had to pay smugglers at each border, adding up to about R24,000 in total.

Unlike Godana, Kebato said he got his asylum seeker papers within 14 days of his arrival. He said he had paid a “broker” R3,000 to get him through the renewal gates and then he had been taken straight to a Home Affairs official’s office where his asylum seeker’s papers had been processed. He said the brokers paid the officials directly.

He had applied for refugee status but had been refused. He was at the centre to explain why he had missed the deadline to appeal.

While GroundUp was speaking to Godana and Kebato a “broker” approached them offering to get them into the office of an official the “broker” knew. He said the official would ask for R1,000. He promised to take Godana in through a side gate reserved for Home Affairs officials. Godana refused.

Home affairs spokesperson Thabo Mokgola said action would be taken against corrupt officials. He said the Refugee Amendment Act of 2017 had been amended to include “lifestyle audits, polygraph testing and harsh punishment” for Home Affairs employees to curb corruption at the refugee centres. (Polygraph tests are scientifically dubious – GroundUp Editor.)

He said the Desmond Tutu centre had state-of-the-art cameras “capturing every movement”. Anyone with a complaint about corruption should go to the centre management with specifics “like time, date and the specific area in the centre” and “immediate action” would be taken, he said.

Despite the claim that Oromo people were being targeted in Ethiopia, Mokgola told GroundUp that Oromo Ethiopians made up less than 5% of the immigrants visiting the refugee centre.

According to the Home Affairs website, asylum seekers must have personally faced a “risk to life or cruel and unusual treatment” to qualify for refugee status. Within 14 days of their arrival, they have to plead their case in an interview with a Refugee Reception Officer. The officer gives them an asylum seeker’s permit which is valid for six months. Before it expires, the asylum seekers have another interview, this time with a Refugee Status Determination Officer, who either approves the application or rejects it if it is “manifestly unfounded, abusive or fraudulent”.

Asylum seekers have 30 days to appeal against the rejection. The Refugee Appeal Board then conducts a hearing, where the applicant can state his or her case fully, and rules on the decision made by the officer.

In a Human Rights Commission inquiry in February, Lawyers for Human Rights said that 96% of refugee status appeals were denied, which is the highest rejection rate in the world.

The Director of Asylum Seeker Management at the Department of Home Affairs, Mandla Madumisa, said the number was high because of the high number of appeals from immigrants who had come for economic reasons.

He said South Africa was a “peculiar case” because 76% of the asylum seekers appealing their statuses were men. Most were from Ethiopia, Bangladesh and West Africa, between the ages of 19 and 36, and were seeking economic opportunities here. He said this was contrary to the “global trend” of appeals from mixed groups of refugees including mothers, children and elderly people.

Madumisa said there was currently a backlog of 140,000 refugee status appeals.

Makgola said: “Home Affairs processes newcomers every day. Clients are asked to come according to the schedule of their nationality in order to ensure readiness to receive them.”

Hussen Abdala, a 25-year-old Ethiopian asylum seeker, sits behind the burglar bars separating the customers from the shopkeeper. Abdala lives in Mayfair, a predominantly Ethiopian neighbourhood in the West of Johannesburg.

He sells cool drinks, chips, and other food. Abala has only been in South Africa for two months. He told GroundUp he had left Ethiopia because he had been involved in protests and the government was arresting supporters of the Oromo Liberation Front. “Ethiopia is a dictatorship in Africa. We have to leave our country which we love so much because there is no freedom,” said Abdala.

He said he had stayed in Kenya for about 10 months before making his way to South Africa, which took another three months and cost about R50,000 in total. His brother had paid the costs and now he had to pay back the debt from his earnings of about R2,000 a month.

“And I still have to send money to my family back in Ethiopia. I have to work at least two years to pay my brother back”, he said.

Abdala said he had tried to get asylum seeker documentation but Home Affairs officials had told him newcomers were not being accepted.

“Ethiopia is part of Africa, we want this government to protect us,” said Adala.

Photo: Kubra Zakii Umr, 18, has been in South Africa for one-and-a-half years. After Umr left Ethiopia, both her parents died. Photo: Ashraf Hendricks

Kubra Zakii Umr is an 18-year-old Ethiopian asylum seeker who lives in Mayfair. She said she had been a student activist demanding equal rights for Oromo people and had left to avoid arrest.

She came to South Africa one and a half years ago with other students who were also fleeing Ethiopia.

Umr said she got an appointment for her asylum seeker papers at the refugee centre. She said she had been back three times but they kept telling her to come back at a later stage. On her fourth attempt, she said a Home Affairs official told her they were no longer accepting newcomers.

Photo: An Oromo refugee outside a store in Mayfair. Photo: Ashraf Hendricks

Ethiopians are protesting against “displacement, corruption, poor administration, human rights abuses and the unequal distribution of resources” in their country according to Newewe Mussa Habib, the National Chairperson of the Oromo Community of South Africa (OCOFSA).

On 16 February, the Ethiopian government declared a state of emergency, following anti-government protests throughout the country and the unexpected resignation of Prime Minister Hailemariam Desalegn.

According to a government press statement, the state of emergency was created to maintain calm. “The emergency rule is aimed at protecting the constitution and constitutional order, as well as ensuring security and stability of the country,” read the statement.

But Habib said the state of emergency would give the military unprecedented control. “They want to kill anyone they want and they want to arrest anyone without a court order”, said Habib. “The government is the one that makes violence. There is no equality. People are fighting for freedom. They are complaining about human rights violations and poor administration”.

This is the second state of emergency in two years.

A graphic video released in 2016 by the Human Rights Watch shows the brutality by Ethiopians security forces against protesters. In 2015, thousands participated in anti-government protests. Security forces fired into crowds killing hundreds. Tens of thousands were detained. According to reports, over 6,000 opposition supporters were released this year, but protests persist.

Ethiopia is governed by the EPRDF (Ethiopian People’s Revolutionary Democratic Front), a coalition party. The Oromos are the largest ethnic group in the region, making up 34% of the population, yet have little power.

The country is being run by an “autocratic” government, says Misbah Ahmed, secretary general of OCOFSA. “There is no freedom of speech, freedom of expression, freedom of gathering … There are no democratic and human rights,” says Ahmed. Now a refugee in South Africa, Ahmed was a journalist in his home country but says he was threatened, tortured and arrested for reporting on the protests and human rights violations. Once released, he decided to flee his home country for South Africa. DM

Photo: Children practise reading the Qur’an at an Islamic school at the Al Taqwa Mosque in Mayfair, Johannesburg. The school almost exclusively teaches refugee children from the surrounding area. The mosque was built by the Oromo community. All photos: Ashraf Hendricks