State Capture: Can the Zondo Commission get the job done? 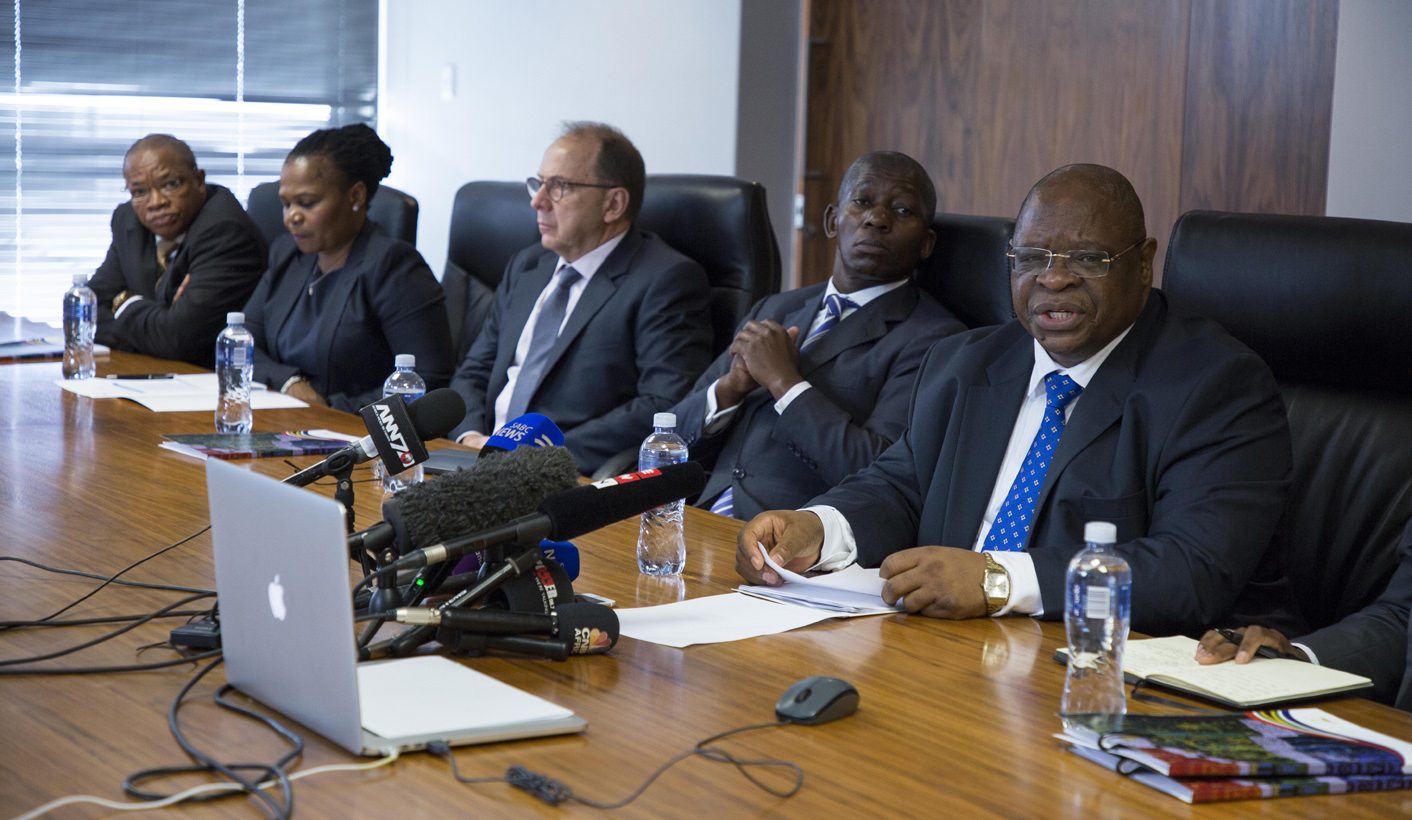 The commission of inquiry into State Capture is officially a reality. Deputy Chief Justice Raymond Zondo announced this week that a team of six commissioners and additional investigators have already begun their work probing allegations of State Capture. Thus far, the commission’s composition has been greeted with cautious optimism – but some fairly significant concerns remain. By REBECCA DAVIS.

It’s a sign of the times that one of the important factors Deputy Chief Justice Raymond Zondo had to address while introducing the commission of inquiry into State Capture was whether its members would remain safe.

Zondo said that providing security for the team was a priority. He added that the names of the investigators assisting commissioners could not be released – “for understandable reasons”.

This is, clearly, a high-stakes affair.

First, the commissioners. Justice Zondo announced that the team of six would be headed by former Auditor General, and current CEO of the South African Institute of Chartered Accountants (SAICA), Terence Nombembe.

“I have no doubt that the commission will derive a lot of value from Mr Nombembe’s participation in this commission as head of investigators,” Zondo said.

But it is Nombembe’s appointment that has caused the most noise from some quarters.

On Thursday, EFF leader Julius Malema told the media that the party demanded the removal of Nombembe as lead investigator, charging that he was “captured”.

Malema’s allegation relates to the fact that Nombembe, as CEO of SAICA, accepted a R1.2-million donation from Gupta-linked company Trillian in March 2017. EWN reported that the donation was made to SAICA’s bursary fund, and receipt acknowledged via a glowing letter from SAICA thanking Trillian for its role in nation-building.

Nombembe subsequently explained that the donation’s dubious associations had been flagged by the SAICA board in July 2017 and paid back by August.

This explanation has not satisfied Malema, who said on Thursday that the EFF sent a letter to Nombembe demanding to know why he had accepted the donation.

Nombembe responded “with an email arranging for a telephone call conversation, perhaps in an attempt to try and bribe EFF parliamentary caucus”, Malema alleged.

The EFF leader stated: “By the time SAICA received the donation, it was common cause and public knowledge that Trillian Capital was used as a corruption vehicle by the Gupta criminal syndicate and had received more than R500-million from Eskom.”

SAICA has also been accused of dragging its feet over the sanctioning of SAICA members implicated in State Capture – most notably, former Eskom chief financial officer Anoj Singh.

In January, economist Dr Iraj Abedian was quoted as describing SAICA’s failure to take action against Singh as “pathetic”, and voiced concern that Nombembe may have been “muzzled”.

Does this mean that Nombembe’s position as lead investigator of the commission of inquiry into State Capture is irredeemably compromised?

No, said experts canvassed by Daily Maverick on Thursday, who pointed to Nombembe’s staunch anti-corruption stance as auditor general.

“We note the EFF’s objection to Nombembe’s appointment, but we are of the view that the EFF objections are not serious enough to cast aspersions over Nombembe’s character,” Centre for Constitutional Rights (CFCR) director Phephelaphi Dube told Daily Maverick.

A number of these senior counsel have acted in high-profile matters. Pretorius represented former SARS spokesperson Adrian Lackay in his case against the revenue service after Lackay was forced out following false allegations of a so-called SARS rogue unit.

Vincent Maleka is a well-known advocate who acted for the estate of Nelson Mandela against Winnie Madikizela-Mandela’s 2016 bid for her late husband’s Qunu property.

Rounding off the team is commission secretary Dr Khotso de Wee, a veteran civil servant who currently heads up a public service training and advisory unit at the University of Fort Hare.

“This is an impressive team of able and experienced professionals whose integrity is beyond reproach. Justice Zondo is to be commended for assembling such a strong team.”

The team was similarly described as “very impressive” by Accountability Now’s Paul Hoffman, who added that its composition “engenders confidence that a serious effort will be made to get to the bottom of State Capture, its causes, effects and the means of preventing it from happening again”.

But one particular provision of the commission’s regulations is still cause for concern to Accountability Now’s Hoffman.

What this means is that testimony heard by the commission cannot be used in future criminal prosecutions, unless the accused person is being charged with an offence against the commission of inquiry itself.

Wrote Hoffman in February: “Those implicated in wrongdoing should be falling over themselves and one another to give evidence to the [State Capture commission] so that the criminal justice administration is blocked from using it against them in the prosecutions long needed but thus far not forthcoming.”

Zondo defended this provision on Wednesday by saying that it was not unique to the State Capture commission, pointing out that the commission of inquiry into the arms deal had a similar regulation.

Citing the Seriti commission of inquiry into the arms deal as a precedent is a questionable choice, however, given that the commission was largely dismissed as a whitewash after it failed to make any adverse findings whatsoever and led to zero prosecutions.

“I am concerned that [Section 8(2)] will do great damage to the exacting of accountability and the success of the necessary prosecutions,” Hoffman told Daily Maverick on Thursday.

Another critical factor about the commission is that it does not have any power to institute criminal proceedings or prosecute wrongdoers. It can only make recommendations to this effect to the president.

There is some logic to this, explains the CFCR’s Dube:

“The fact that the commission will not be able to institute criminal proceedings is meant to encourage witnesses to fully disclose any and all wrongdoing, without the fear of self-incrimination”.

But it also means that the ultimate responsibility for bringing those involved in State Capture to book falls once again to state institutions which have shown limited appetite for the task thus far.

“It will be up to the organisations within the criminal justice sphere – the SAPS, Hawks and NPA – to assemble charges and dockets and bring the matters to court,” says CASAC’s Naidoo.

“It is therefore critical that these institutions are capacitated to fulfil their legal and constitutional responsibilities in a responsible manner.”

Naidoo also notes that civil society, the media and the South African public at large will need to remain vigilant.

“At the end of the day it will be up to all of us to ensure that those who have broken the law are held to account.” DM

Photo: Deputy Chief Justice Raymond Zondo with members of the team who will lead the inquiry into allegations of State Capture. Photo: Daily Maverick.