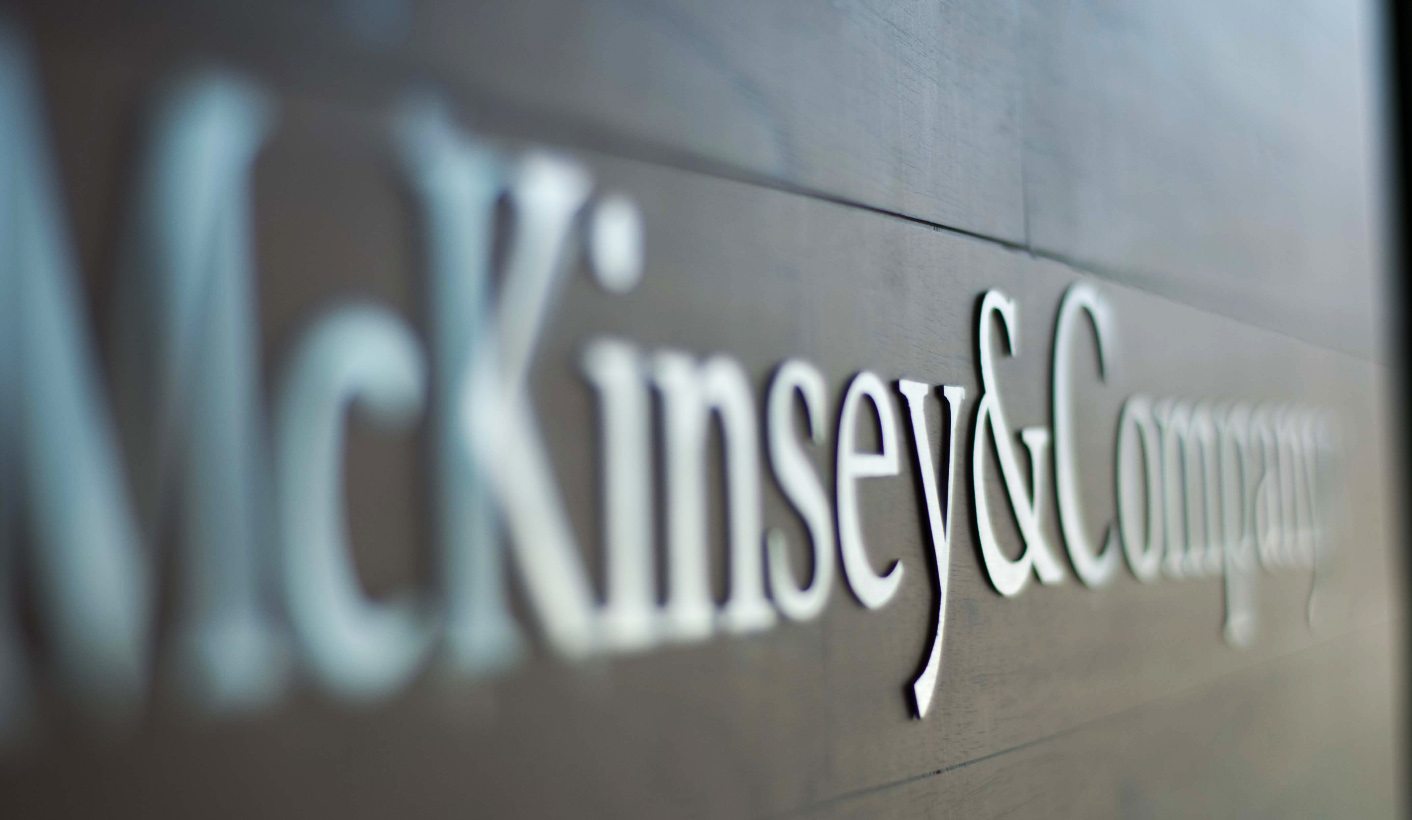 McKinsey & Co’s offer to pay back that controversial R1-billion to Eskom is not quite as clear-cut as the global consulting firm has made out. It has a catch – one that sounds more like a get-out-of-jail free card. By JESSICA BEZUIDENHOUT for SCORPIO.

In its bid to contain the damage around the R1-billion it received from the South African power utility, consulting firm McKinsey & Co seeks a guarantee that it would not be punished twice.

For several months, the company has been at pains to convince the South African public that it wants to pay back the money, but just doesn’t know how to do this.

Now, for the first time, McKinsey has shed light on what it calls the need for a “safeguard” – essentially a condition – for that repayment to Eskom.

In a legal challenge filed against a preservation order obtained by the NPA’s Asset Forfeiture Unit in December 2017, McKinsey raises a concern about double jeopardy, a legal principle that protects an accused person or entity from being punished twice for the same criminal offence.

“While prepared to return the funds in question, McKinsey should not be exposed or be subjected to double jeopardy in relation to the contract fee by also having to pay Eskom the same amount (or any portion thereof) after having paid this contract fee to an agreed or court-designated governmental entity,” said McKinsey director, Georges Jean Pierre Desvaux, in an affidavit.

He further sets out preliminary detail of McKinsey’s case against the preservation order in his statement filed at the High Court in Pretoria on 2 February.

And he confirms the consulting firm’s fears that Eskom, now under new management, could slap it with an additional R1-billion bill, or part thereof, should it allow the AFU to seize the cash in terms of the preservation order.

The parastatal’s former acting CEO, Sean Maritz, in fact unsuccessfully tried to extract the payment from the company a few weeks after the AFU obtained its order.

Maritz, stopping just short of apologising to McKinsey, wrote a letter to the company titled “Letter of Demand Withdrawal” in which he claimed the Eskom board had finalised an investigation and had resolved that “no wrongdoing was found” and that the payments to McKinsey and the Gupta-linked Trillian Capital Partners “were valid”.

Maritz then added a “by the way” in the form of “here’s our banking details” for that payment. Maritz was later suspended and has since resigned.

On the face of it, Maritz’s letter, dated 16 January, does appear to lend credence to McKinsey’s concerns about being hit for a second R1-billion. But, the company’s bid to rely on double jeopardy to spare it any further sanction may actually be a hidden trump card to get it before a court of law.

Under the Criminal Procedure Act, an accused – whether a person or other legal entity like a private company – must have been previously either convicted or acquitted of the same criminal offence before she or he can rely on the double jeopardy argument.

Without commenting on this specific case, Professor James Grant, an expert in criminal law, said: “You cannot side-step the criminal justice system if you are looking to rely on double jeopardy.”

This suggests that McKinsey’s concerns with double jeopardy would require a conviction.

“Even if there is agreement on a guilty plea and a lesser sentence, it must go before a court: a magistrate or a judge. There is no way around it,” Grant said.

And even then, he said, then court must be satisfied that it is in the interests of justice before it accepts the plea. In deciding that, the court will have reference to various considerations, including the extent of the harm done.

In its ex parte application for the 14 December order, the state argued that Eskom had paid nearly R1.6-billion to McKinsey and the Gupta-linked Trillian Capital Partners in contravention of its procurement policy and without a valid contract.

The payments, it said, were preceded by a series of alleged breaches of the Public Finance Management Act, deliberate and fraudulent circumvention of the power utility’s supply chain processes that were tantamount to theft, fraud, money laundering and corruption in terms of the Prevention and Combatting of Corrupt Activities Act.

McKinsey has denied wrongdoing but stands accused of providing a letter to Eskom that paved the way for the power utility to pay the Gupta-linked Trillian nearly R600-million.

This letter had created a “veil of legitimacy” for Eskom to pay hundreds of millions of rand to Trillian, which did not have a contract with Eskom, nor with McKinsey.

Desvaux, in his concise affidavit, spells out McKinsey’s preliminary argument against the AFU order. He maintains that the company had earned the R1-billion in fees for its cost-saving work for Eskom, that it was not the proceeds of crime and even if it were to be found such, the preservation order was unnecessary as McKinsey had already committed to paying back the money.

The company also seeks to also exclude any interest held in the affected Standard Bank account from the order.

In a detailed response to questions, McKinsey told Daily Maverick on Wednesday that the previous Eskom management had shifted the company’s position since the scandal started and had sent mixed signals about the demand for repayment.

“Eskom recently again requested that we repay the fees to them, while the AFU has also obtained a preservation order. Without an appropriate and transparent legal process, acceptable to the relevant authorities, we risk having to pay back the money twice,” the company said.

In addition the challenge to the AFU preservation order could not be a surprise to authorities since McKinsey’s own investigations to date has found no evidence of wrongdoing, the company said.

“We worked on an at-risk basis – meaning we would only be paid on on actual impact created, and there was no guarantee we would be paid at all.”

The company said it was fully committed to working with all official state capture inquiries and reiterated its commitment to returning the fees. It confirmed that it was in “constructive discussions with the NPA”.

The company said it was fully committed to working with all official state capture inquiries and reiterated its commitment to returning the fees. It confirmed that it was in “constructive discussions with the NPA”.

Battling the NPA is but one of McKinsey’s worries at the moment. Corruption Watch is actively co-operating with the US Department of Justice in relation to the company’s conduct in South Africa. Under the US Foreign Corrupt Practices Act, multinational companies are held to account for their conduct abroad.

Then, the official Commission of Inquiry into State Capture, headed by Deputy Chief Justice Raymond Zondo, is scheduled to kick off in the coming months – this comes on top of criminal cases opened by the DA and the country’s registrar of companies, the Companies and Intellectual Property Commission. DM