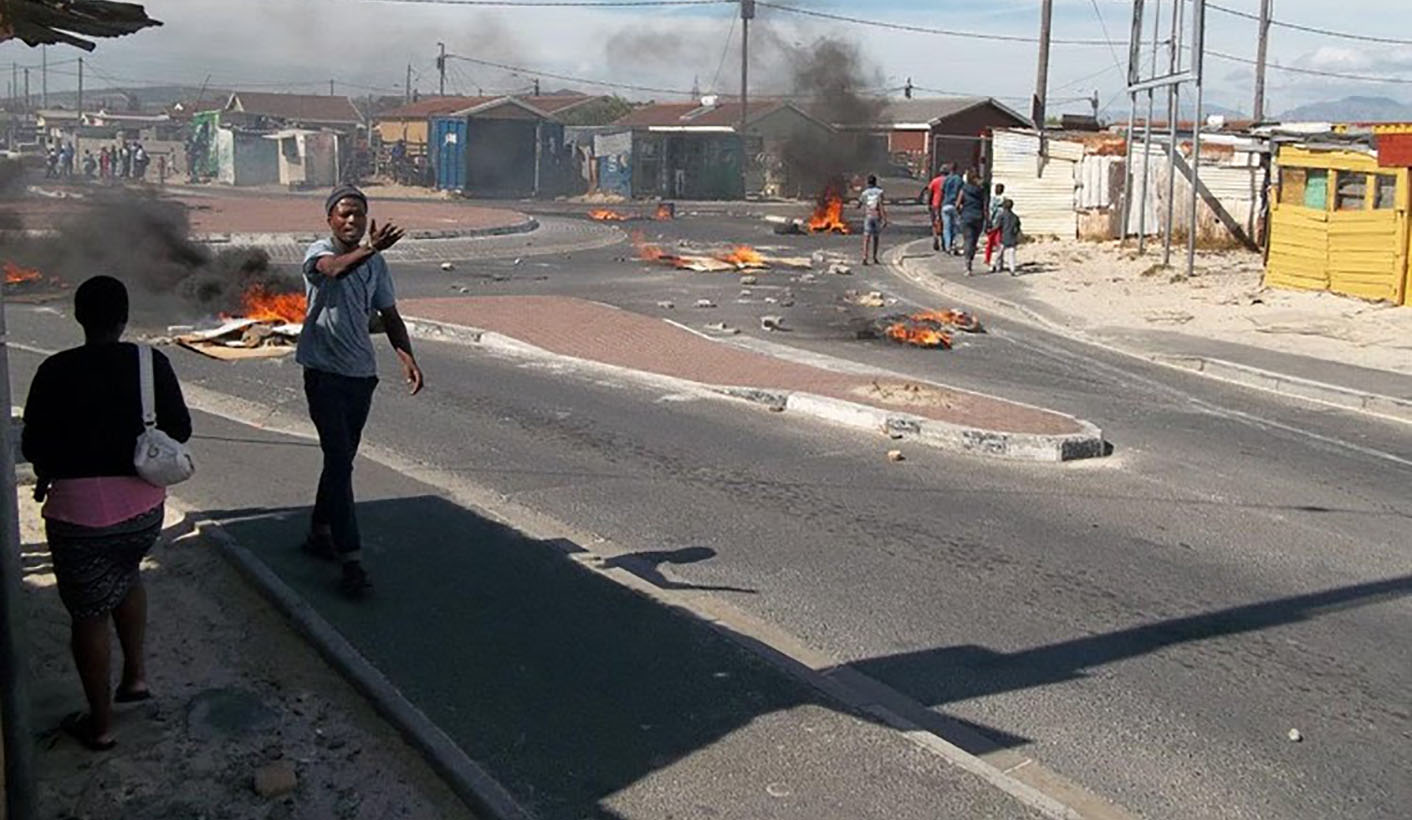 A riot ensued in Mfuleni when backyarders tried to occupy vacant land and erect shacks, which were then demolished by the Anti-land Invasion Unit. By GROUNDUP STAFF.

In the morning, backyarders tried to occupy vacant land and erect shacks, but the Anti-land Invasion Unit (ALIU) and Law Enforcement demolished the shacks. The riot followed this.

“The suspects are expected to appear at Blue Downs Magistrates’ Court tomorrow, 9 March 2018.”

Bulelwa Havi sells meat from a stand along the street.

“I just see the police dispersing the rioters, but I haven’t seen a leader,” she said. The riot started at about 10:00 and affected her business.

“Residents can’t come to my stand and buy my meat because police officials are shooting them. Now my cow livers are idling and rotting,” Havi said.

Police pursued, caught and bundled a group of youths into a police Nyala near her meat stand as she spoke GroundUp.

Zandiswa Maphutheni stays in a shack with her two sisters.

“I and my sisters are out of work, so we can’t afford to pay rent,” she said.

“When I’m about to bathe or change a pad, I must ask my sisters to leave so that I can have some privacy. It is embarrassing and uncomfortable to change a pad while there are people around, even if they are your sisters.”

“I share one bed with my sisters and they sometimes come home drunk about 3am and force me to wake up, open the door and sleep beside them while they reek of alcohol,” said Maphutheni.

Thandokazi Mdumbe works as a domestic worker in Cape Town. She said she occupied the land because she could barely afford to pay rent.

“I want to have my own place because I can’t afford to fork out R400 for rent and R100 for electricity monthly,” she said.

Mdumbe said the rented shack she stays in is too small to accommodate her, her four-old son and her mother.

“I sleep on the floor. My mom wants to bring her boyfriend to spend time with her in the shack, so she needs space and some privacy,” she said.

Said Mdumbe: “I also want to have my own place and stand on my own two feet because I’m an adult.”

She said law enforcement officials destroyed her shack, which she erected at about 12:00.

“I got the building material from sympathetic neighbours who noticed that I struggle to survive. Now I have lost it,” said Mdumbe.

The ALIU removed shacks occupying private land in Gugulethu on Tuesday. A riot ensued after this as well.

The provincial Department of Social Development offices in Gugulethu had to shut down after four vehicles belonging to staff, and two state-owned vehicles were burnt or damaged.

“Two social workers were forced to barricade themselves in the building with a child who was in their care, as rampaging protesters tried to access the main office building,” said a statement by the department.

“The actions of the protesters who attacked the precinct was nothing short of criminal, and we are grateful to the [police] for responding swiftly to restore order and prevent any loss of life or injuries.”

Mayco Member for Social Services, Safety and Security JP Smith said it wasn’t entirely clear who was behind the recent protest action.

He said the ALIU and police had removed structures in Gugulethu and Nyanga “linked to persistent land invasions in recent weeks”. DM