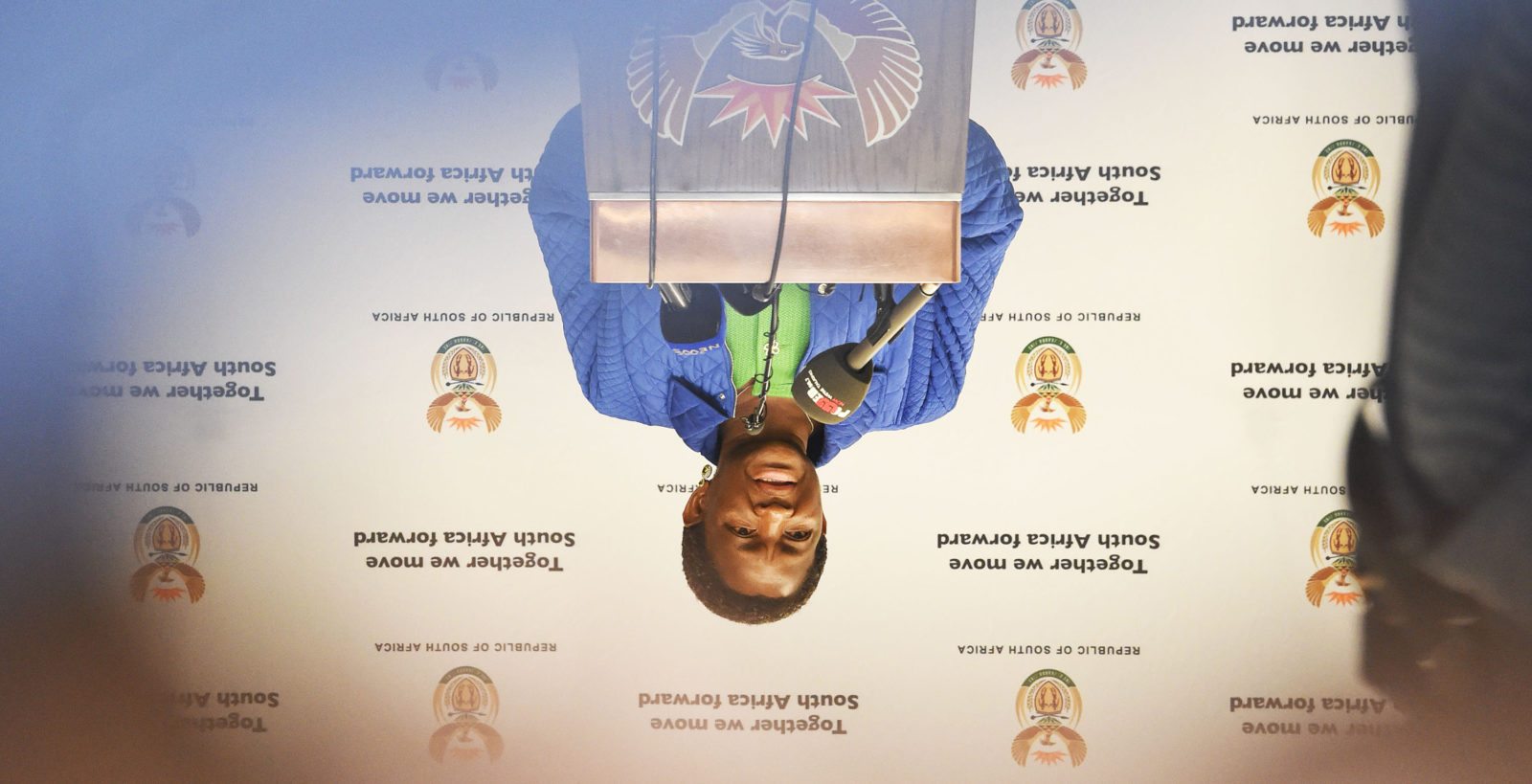 While the Constitutional Court on Tuesday might have reserved judgment with regard to Sassa’s application to extend the already extended unlawful contract with CPS for a further six months, Chief Justice Mogoeng Mogoeng did not attempt to conceal his displeasure, suggesting that Sassa and CPS had deliberately delayed the process and that the court was being “laughed at”. Backed into a corner, even blackmailed, according to Justice Sisi Khampepe, millions of vulnerable South Africans would be left destitute if the court refused to grant the extension. This is the second time Dlamini and Sassa have held a loaded gun to the court and the country’s head. By MARIANNE THAMM.

We have been here before. At the brink of yet another potential national crisis, brought to you exclusively by former social development minister Bathabile Dlamini and the South African Social Security Agency.

This time it is the well-being of some 2.8-million beneficiaries who receive their grants in cash payments, a responsibility the South African Post Office is not yet ready to assume. The balance of social grant recipients will, however, be able to use existing Grindrod Sassa cards at their banks and SAPO come 1 April when the current extended CPS contract expires.

On Tuesday, ConCourt judges, particularly Chief Justice Mogoeng Mogoeng, made clear the court’s displeasure at Sassa’s last-minute application, once again holding the highest court in the land hostage and passing the buck, ultimately at the expense of the country’s already stretched taxpayers who will foot the bill for the privatised service.

Back in 2014 the Constitutional Court didn’t trust Sassa and Dlamini to manage the job of taking the payment of grants in-house without micromanaging them.

But even under these strict conditions, both failed to follow or adhere to the court’s directives. In March 2017, at the eleventh hour, and after several high-level resignations in the DSD and Sassa, the Constitutional Court was forced to extend the CPS contract for a further year.

The conditions imposed were even more stringent than before. Now Sassa would not only be supervised by the ConCourt but also a panel of experts as well as an inter-ministerial committee.

And still, here we are.

Advocate Nazeer Cassim, on behalf of Sassa, asked on Tuesday by Justice Johan Froneman what would happen if the court did not grant the six-month extension to CPS, Cassim replied, “There will be chaos.”

Justice Khampepe was compelled to comment that Sassa continued to fail to “get its affairs in order” and that it was a “cause for concern that Sassa comes to this court almost to blackmail the court that if it is not given an extension then more than two million grant beneficiaries will suffer. You have no alternative that you can submit you will resort to if this court should refuse to grant you an extension.”

Hers was a statement to which the Chief Justice later added, “We are shocked by is this. About 2014 the AllPay judgment decided this is an unlawful contract. Up until now, I think it is a full presidential term of an American president, nothing has been achieved. The court is still being approached after so many years of saying ‘this is unlawful’. And unlawfulness continues to be perpetuated while we are watching. It is very sad. For anyone charged with this sensitive and enormous responsibility, it is like we are being laughed at by Sassa and CPS. It is most unfortunate. And what is even sadder is that there is no explanation. You know when somebody has done wrong, and they have an explanation to provide that we can all relate to, it makes a lot of difference. No explanation that we can understand has been put before us.”

It was almost a year ago that the Centre for Applied Legal Studies, on behalf of the Black Sash Trust, approached the Constitutional Court to avoid a Sassa and DSD self-generated crisis with regard to the taking in-house of the payments of social grants at the end of March 2017 when the CPS contract came to an end.

On Tuesday the Sash did not oppose, or rather was “unable” to oppose, Sassa’s application, given the “significant risk posed to grant beneficiaries”. However, it argued that Sassa had placed insufficient information before the court for the relief sought, that Sassa’s proposed plan had inadequate safeguards for protecting beneficiaries’ personal data which still left them vulnerable to exploitation, that there was no justification to pay CPS any additional fees for fulfilling its constitutional obligations and that the court should, once again, extend its supervisory role in the matter.

Earlier Wandisa Phama, an attorney at CALS, said that Sassa had known since at least 18 December 2017 that it would require a CPS cash payment extension, yet it had delayed, for nearly eight weeks, before bringing the application.

“The conduct of Sassa is unexplained. The silence of the Minister of Social Development is deafening,” said Phama.

The Sash is also calling for an end to unlawful deductions from social grants and for a moratorium to be placed on issuing EasyPay Everywhere (EPE) cards.

On Tuesday, Advocate Gilbert Marcus SC, on behalf of Freedom Under Law, argued that CPS should not be making profit from its extended contract with Sassa. And while FUL was not opposing Sassa’s application it would like the court to apply the no-profit principle.

Les Morison, on behalf of CPS, argued that the company had not been found guilty of corruption and that it had provided efficient and effective service over the five years of its contract. CPS, he added, was not to blame for the crisis and that it had requested Sassa to lead the process.

He said that the company stood to lose around R70-million a month, or R420-million over six months, if Sassa paid it the same amount, R16.44 per beneficiary, to distribute cash grants as this was the most costly part of the contract. Morison said that a fee would have to be negotiated with Treasury.

CPS, said Morison, had enough cash reserves until 31 March 2018. If the contract was extended to the end of May at the same price, “the floor will fall out of the building”.

“And we know what lies beyond that, which is why this application cannot be refused,” said Morison.

Sassa, the court heard, did not have any alternative plans should the court refuse to extend the CPS contract. DM