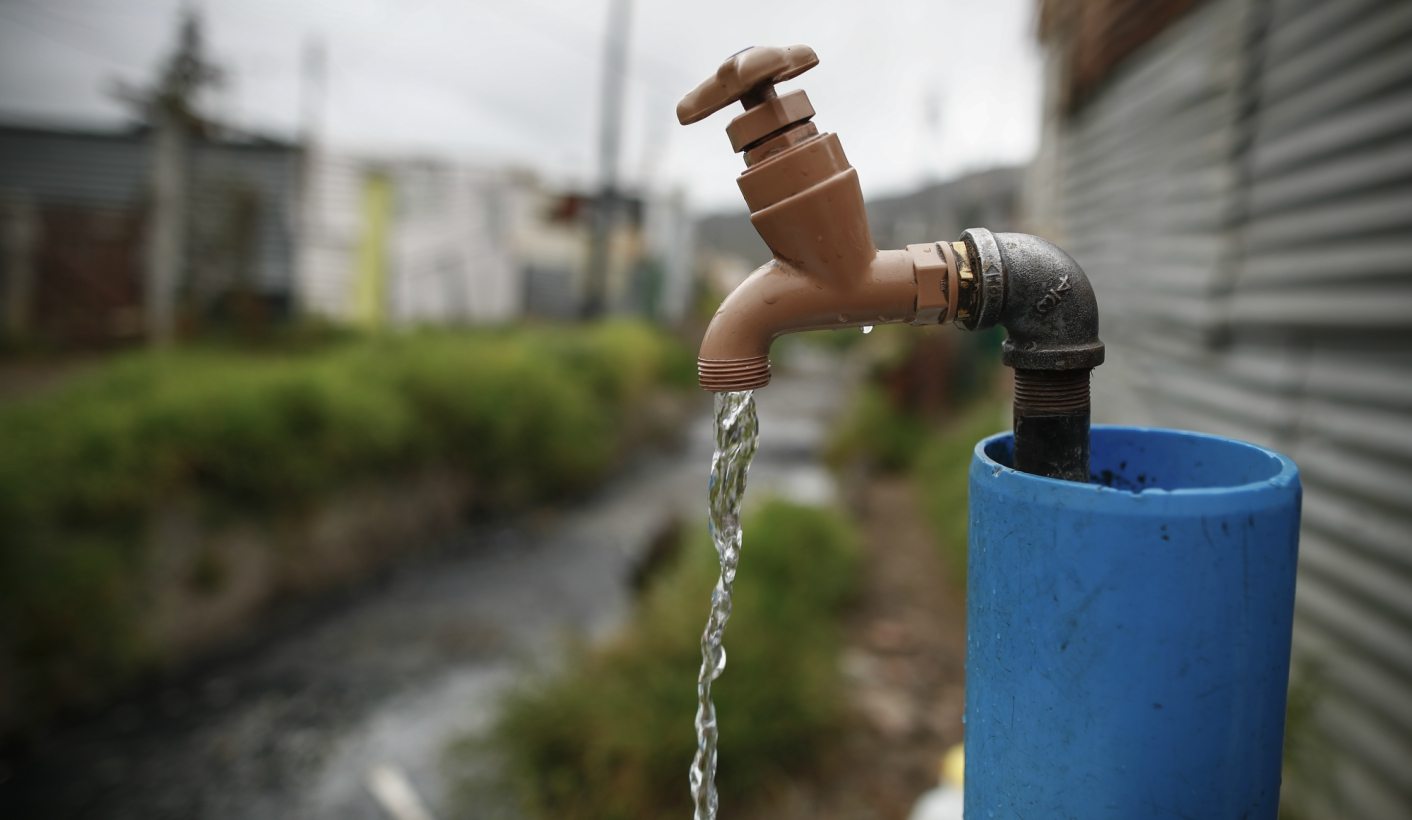 Day Zero has officially being pushed back a number of times, but for the women of Bloekombos in Kraaifontein, Cape Town, Day Zero has already arrived. Access to water, or lack thereof, tends to disproportionately affect women. So why has this narrative been missing from discussions around the current water crisis? By NABEELAH MIA and RUBEN WYNNE.

Over the past few months, the City of Cape Town, including its Disaster Risk Management Centre (DRMC) has scrambled to temper the effects of the current water crisis that Cape Town is facing. In February this year, the DRMC put out a call across Cape Town for volunteers to assist with creating a water management plan, including managing and co-ordinating points of water distribution across the city, in the event that Day Zero (currently scheduled for 15 July 2018) occurs and there is a lack of access to water across the city.

However, what many may not realise is that while Day Zero has officially been pushed back a number of times, for many South Africans, this lack of access to water is the norm. For the women of Bloekombos in Kraaifontein, Cape Town, for example, Day Zero has already arrived.

Meet Mary Anne Elizabeth Wynne, a 57-year old resident of Bloekombos. Up until 1998, Bloekombos was classified as an informal settlement until houses were built in the area as part of the Reconstruction and Development Programme. Mary has not had constant water for the past two weeks. When it is running, the water is often dark brown and dirty. Mary is also taking chronic medication and is often forced to drink this water in order to take her pills.

She lives with her husband, four sons and a grandchild. Mostly, her husband will borrow a car to fetch 20l of water from the neighbouring area of Scottsdene. This 20l of water is used to cover the cooking, cleaning and hygienic needs of everyone in their home. When they cannot travel to Scottsdene, Mary has to walk to collect water a few blocks away from her home, sometimes by herself if no one else is at home. Until recently, Mary thought that Day Zero had already arrived.

She says: “What I don’t understand is how come some people have water and others don’t. Day Zero is for everyone but some people’s water is on and others are off. Day Zero is here for me… and that isn’t right. We paid for water.”

Ida October, a 50 year-old resident of Bloekombos Kraaifontein, has also not had a constant water supply for two weeks. A small trickle of water drips out of her tap between 10pm-12am. When this happens, she is able to fill up two buckets with water, which have to be used among the three people living in her one-room home. When asked where she sourced water from during the day, she told us that while previously she had asked her neighbours, they are now hesitant to share their water supply as they too are suffering from a lack of running water. In fact she does not remember a time when there was constant running water in her home.

Emily Nkuzo, 69, also a resident of Bloekombos, has not had water for the past few weeks. She (like Mary and Ida) was not informed about the water shortages. Unlike Mary and Ida, Emily lives alone. Her son died last year in a car accident. When she needs water, she has to carry what she’s collected herself from people living a few blocks away.

Lack of access to water has made the lives of all three women difficult and stressful. A 2017 report released by the World Bank Group entitled Rising Tide highlighted the tenuous relationship between water and gender. Water access mirrors the gender inequalities in other realms of life, such as employment, household division of labour, exposure to and management of risk, access to services and decision-making. Women are often the main providers and managers of water in households, especially in rural households, particularly in rural or peri-urban areas. A recent study of 24 sub-Saharan African countries estimated that over 13-million adult women, spend more than 30 minutes each day collecting water for their households. Indeed, in Bloekombos, collecting water is seen as women’s work.

This responsibility, however, places a heavy burden of care on women and girls and affects several aspects of their lives. Where girls walk long distances to fetch water, they may arrive late and tired to school, or not be able to attend at all. In areas where this occurs, where water supply systems are implemented closer to their homes, school attendance of girls has increased.

Added to this, in instances where women do not have access to proper sanitation such as latrines, they have to walk to communal toilets or public spaces. Night-time trips often put them at increased risk of physical attack and sexual violence – for example as in the case of Sinoxolo Mafevuka whose body was found inside a communal toilet in Khayelitsha in March 2016.

In addition, women also have particular hygiene needs in relation to menstruation, pregnancy and childbirth, and lack of water provides particular discomfort and distress. The absence of clean water and sanitation also increases the risk of infections and diarrhoeal diseases for everyone. Carrying water is heavy manual labour. In a study of six communities in South Africa, women and children carrying water weighing an average of 19.5kg over an average distance of 335m were studied. Sixty-nine per cent reported spinal pain, with the potential to lead to muscular-skeletal disorders. “If you carry the water you have to carry it on your head, your arms… it’s heavy. I have arthritis also,” says Ida, who until recently was working as a farm labourer picking pomegranates.

In addition, within the context of the Western Cape drought, particular concerns over job security and food security are at issue and have a gendered component. For example, where water allocations and entitlements to farms are cut, this will have an impact on the number of people who will be able to work on these farms, resulting in workers which include women, losing their jobs. Research commissioned by the Women on Farms project found that “in general terms and absolute numbers, women are predominantly seasonal workers while men are predominantly permanent workers”. Seasonal workers are more vulnerable to job losses than permanent workers. Due to the water shortage, the farmer for whom Ida worked was forced to cut down all of the pomegranate trees as they were dying from lack of water. This resulted in a number of workers, including Ida, her husband and son, losing their jobs.

These are but a few of the onerous effects that a lack of water has on women. It is evident that urgent strategies need to be put in place to cushion the gendered impact of the lack of access of water.

International Women’s Day on 8 March is a day calling for action towards the acceleration of gender equality and we call on the City of Cape Town and other spheres of government to work with women and mitigate the negative impact that lack of access to water has on women and the longer term negative effects on gender equality. We call on the city to mobilise resources to improve access to safe water and sanitation, by strengthening access to information, training and resources related to access to water. Most importantly, there must be gender equality in the decision-making process. Women may have the primary responsibility for the management of water supply in the home but are rarely involved in the general management and planning of water supply.

As Ida, a woman who has lived without a constant supply of water for most of her life says: “It can’t be like this forever. A person gets tired.” DM

Sonke Gender Justice will be holding an International Women’s Day Panel discussion and community dialogue at the Salt River Community House on Thursday 8 March to explore the relationship between gender and water in the context of Cape Town. This event will include around 100 community members, primarily women, from diverse backgrounds and water crisis and gender experts to foster discussion around the impact of the lack of access to water on women

Nabeelah Mia is a Policy Development and Advocacy Fellow at Sonke Gender Justice and Ruben Wynne is a Community Mobiliser at the organisation.