Knysna Blaze in Retrospect: Photographer captures the order of things disrupted by a firestorm 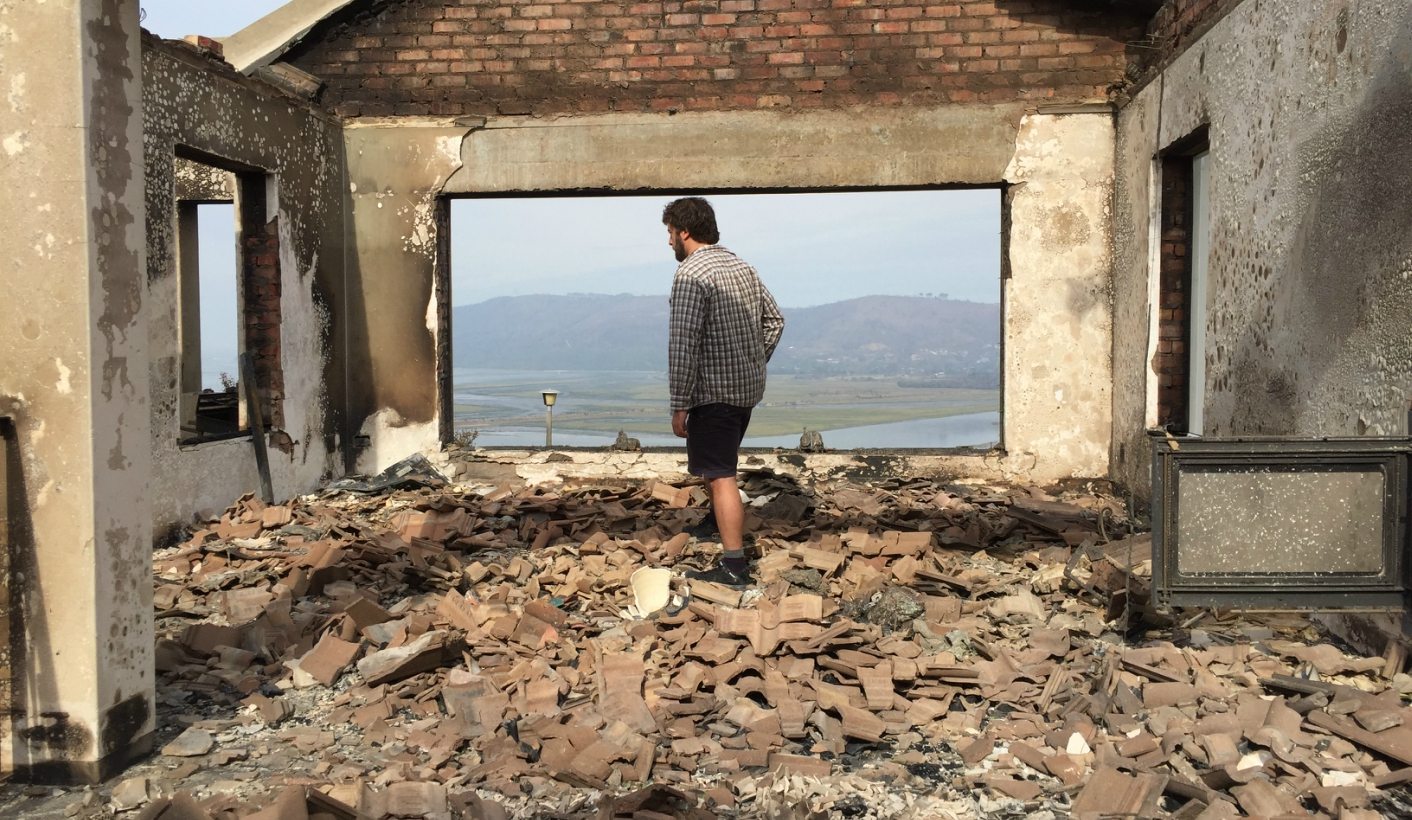 Eight months later, the fires that ripped and raged though South Africa’s Garden Route in 2017 are present to an ever more skittish public mind – if at all – only sporadically and through either statistics (R4-billion plus in damages; 700 houses destroyed; thousands displaced) or botched or compromised reconstruction programmes, peppered with stuttering accusations of culpability and walls of official denial… But photographer Sean Metelerkamp brought a different kind of eye to the ruins of his family’s Knysna home, and has now posted an eerily different vision of the disaster. By IVOR POWELL.

There is a substantial deposit of soot on the walls in the aftermath of the fire. On the cistern’s ledge, a single flower – once jauntily protruding from the neck of an empty wine bottle, put there in the bourgeois way to brighten up what the polite middle classes used to call the smallest room in the house. Now it has been burned to a mute, brittle and skeletal crisp; matt black against the black of the devastation all around. Black black and black – though, perversely or wilfully, the atmosphere has thickened to a greenish haze, patterned with virtual geometric forms a bit like floating dice of a surrealistic kind.

A familiar space remade – estranged – the order of things disrupted: the way it is on the other side of the mirror of sense.

The picture is one from a series that photographer and music video maker Sean Metelerkamp shot after the flames had died down and the smoke cleared around the burned-out shell of a family home gutted in the forest fires that last year devastated South Africa’s Garden Route. Described as the worst of the century, the 2017 inferno displaced between 3,000 and 4,000 people and cost the economy well over R4-billion in damages to property and infrastructure – and still rising.

Metelerkamp, who grew up in Knysna but is now based in Cape Town, had just returned from exhibiting photographs in Europe when the blaze started up on 7 June. By the time he was able to get there and the fires had died down enough to allow access, his father’s had been added to the list of over a thousand homes completely gutted.

I’m not sure exactly where domestic fires on this scale would place in those pop-psychology lists of most traumatic life experiences. But I guess it would be pretty high… high enough to do justice to a condition of near clinical debilitation – psychic disorientation even – that filmmaker and writer Chris du Plessis movingly highlights in his Daily Maverick piece published in the wake of the conflagration.

With the temperature rising and the flames creeping ever closer, Du Plessis finds himself virtually petrified with irresolution in the kitchen looking over the possessions he was about to lose – filled, as he puts it, with “hysterical calm”.

But in a moment of clarity I suddenly knew exactly what to do. I grabbed a white clay lamp that my mom had bought in New York in the late 1950s, scooped up eight beers standing on the kitchen counter and ran to the car…

Then, remembering his passport, he goes back in again…

Back in the wonderland of multiple choices I grabbed a white silk shirt emblazoned with golden dragons (appropriate in retrospect only) that I’d brought back from Bali, a pair of huarache-sandals from Mexico and then sat down exhausted. “Fuck this. It’s madness…”

Nor is Du Plessis the only one in the neighbourhood to have been thus discombobulated. The daughter of a friend, he notes,

… not particularly interested in cooking or dancing, chose to grab a toaster, her matric dancing shoes and a family recipe book.

Another acquaintance decided to languidly start mopping his deck in blissful denial until pressed to take the mop, his golf bag and a fishing rod he hasn’t used for 20 years.

The thing is, what are destroyed when your house burns down are more than just possessions and comforts. There is also what is invested in what, in these things with which you have surrounded yourself or that connect you with where you have come from or with what you aspire to. They are irreplaceable; they are the material codings of identity, portmanteaux of your entanglements with life.

And yes, several of the photographs that came out of Metelerkamp’s encounter with the wreckage do channel this supercharged poignancy, or anxiety of loss. One is of the mangled skeleton of a small heirloom clock which Metelerkamp identifies as having been bequeathed to his (Sean’s) father, John, by John’s father… and maybe further back than that. Now it has the look of having been blasted out of shape and out of function: the Roman numerals marking the hours displaced, the hands melted directly into the clock face, never to move again.

Another photograph is of a picture frame once displaying a family portrait; the figures of the Kodak moment now disappeared, extinct in the all-consuming dark.

But that is not what is startling about the cycle of Metelerkamp’s photographs. Look again: in the photograph referred to, above, of the lavatory, a roll of white toilet paper is still affixed to its hanger. At first glance it looks completely unmarked, by some magic untouched by the blaze that has gone before; you could still use the paper for its intended purpose – if you happened to be caught short in the alternate reality on the other side of the mirror, that is.

This is not the only photograph in Metelerkamp’s series that seems to defy the logics of science. Another shows a burnt bookcase set in a space littered with tiles and masonry cracked and shattered by the violent intensity of the heat. Though some soot has settled, you can still make out the Stephen Kings, the Stieg Larsson trilogy, the Wilbur Smiths, the pop-psychology self helps… not the science-fiction of Ray Bradbury, by the bye, or in particular Bradbury’s classic Fahrenheit 451 (titled as you might recall for the temperature at which paper catches fire).

Photo: A firestorm of a selective kind. Photo: Sean Metelerkamp

Another of Metelerkamp’s photographs records what has survived the conflagration in one of the bedrooms. Seemingly untouched by a firestorm that has swept through the space – with enough intensity, let it be noted, to redraw, summarily, the geometry of a Venetian blind, and to snap moulded plaster like potato crisps – presumably highly flammable duvets and bed covers are only a sprinkling of ash away from being crisp and pristine.

Actually, the science underlying the paradoxes in Metelerkamp’s photographs is relatively easy to explain. As forensic scientist David Klatzow puts it,

“An indoor fire burns like an inverted swimming pool. The heat rises from the floor and then as it collects gradually fills the room from the ceiling down…”

Or – especially if the flames are driven by winds in the first place, or if they can find some kind of flue or passageway into more richly oxygenated air – they might move on before that critical density of heat is reached.

But it is not really about the science of the inferno; it is about perception and the expectations of eye that we bring to our everyday experience of the world.

What makes Metelerkamp’s photographs remarkable – as photographs – is not anything of a Ripley’s Believe It or Not! order of science. It’s the way they hold two mutually exclusive realities in tension at the same time – the everyday domestic image transfigured in paradox like a Van der Graaf generator crackling with static electricity in a school experiment.

In some photographs, the effect is almost literal: one (titled Wall Ceiling Wall) seems to render the fire-as-artist as having etched with cracks and fissures into the black smudgings of soot. The effect is eerie and somehow elemental, as evocative of primal energies and mythological dramas as lightning is against a Northern Cape sky.

Other transformations have been more obviously processual in character. The way the paint has bubbled and blistered on a lounge wall, for instance, produces an effect that is almost pointillist, in covering the surface with blobs and spots – white and grey on smoky black – like something done for dark-side decorative effect.

In another photograph, the same kind of blistering is recorded on the handrail of a staircase. Just how intensely the blaze has burned is there to be seen in the gutted and molten insides of a wall switch, now hanging like gloop from the metal frame. Somehow, in an atmosphere still thick with fallout from the fires, the same unearthly green haze encountered in the bathroom seems now to have collected at the foot of the stairs.

Not that it is all weird science and the designer finishes of destruction: the first image in Metelerkamp’s picture cycle shows the photographer’s brother, flashlight in hand, an expression eloquent of resigned acceptance on his face, surveying the mess, and surrounded on every side by wreckage and ruin. This records what remained after the fire had burned out on the ground floor.

As Metelerkamp remembers it:

My brother and I went into the remains of the house with our hands, boots, a torch and my camera… Boet and I stomped about and dug our hands through it all, buggering about… breaking things, taking photos and making noises. Satisfied with our encounter, we left with chests full of ash and the gnarled remains of cutlery in our pockets.

At the end of the picture cycle is wide shot matching the downstairs shot with the flashlight, of Sean’s brother John Michael amid the shattered and fragmented rubble of what were once terracotta roof tiles on a roof now open to the sky.

Between those two photographic bookends there lies a picture essay haunted with questions of entanglement and estrangement, of the strangeness that lies at the heart of things. Questions of a kind that, no doubt, Chris du Plessis asks himself as he contemplates the white silk shirt emblazoned with golden dragons he managed to save from his own fire.

Metelerkamp plans to exhibit the cycle later in 2018. The venue is not yet confirmed. DM