VAT: Scrap increase for the sake of the poor – DA 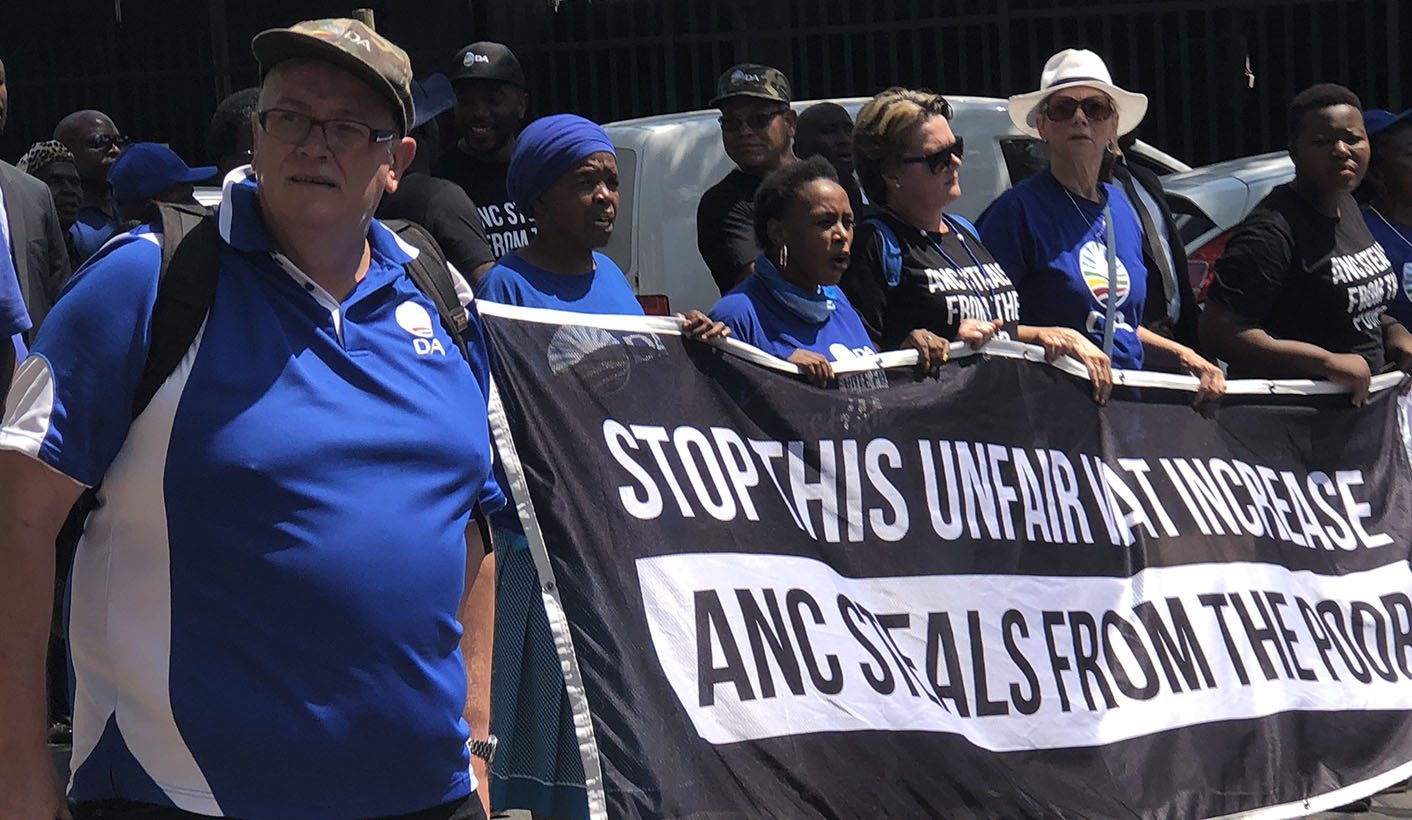 On Tuesday, hundreds of Democratic Alliance supporters marched to the Department of National Treasury in Pretoria calling for the scrapping of the increase in Value Added Tax as announced in the Budget. By PUSELETSO NTHATE.

Promising to fight the 1% increase in VAT on behalf of the poor and the unemployed, Democratic Alliance supporters gathered at the old Putco depot in Marabastad in Pretoria on Tuesday ahead of their march to the Treasury offices in the CBD.

Unemployed Lebogang Tshabalala, from Mabopane, whose only source of income is a child support grant, was forthright: “Some us are not working and we’re depending on grants for survival. I acknowledge that the child support grand has increased but there is no point if the VAT will increase. To me it makes no difference because I will be taxed more for things I buy now.”

Lora Monareng, also from Mabopane, added that finding a job is difficult. “It’s a struggle. With this increase in VAT, we are about to face the most difficult era in the country. I am not working and I must make sure that there is food on the table and pay for things like school transport and clothes for my children. This will affect our pockets.”

In February the former finance minister, now Minister of Home affairs, Malusi Gigaba, announced during the 2018 Budget speech that as from 1 April VAT will increase by 1%, from 14% to 15%.

“You cannot tax yourself out of the mess. What the ANC is doing will have a heavy impact on (personal) budgets that are already overstretched. It will have a negative impact on our economy,” said Moodey.

He said the ANC wanted to correct the wrongs of the past by overtaxing people.

“Let us have a look at Gauteng. Each year in Gauteng, we have etolls that we have been fighting for over seven years. Then you add 52 cents fuel levy which will add to inflation, then this 1% VAT increase. We are taxed to death,” added Moodey.

The DA said the increase was symptomatic of an ANC government which had failed to plan and make the necessary cost-cutting measures to shield ordinary citizens from poverty and unemployment.

Addressing protesters, Maimane said the party was against any solution that will “make the people, who already can’t afford the basics, pay even more”.

He said there is a R50-billion hole in the Budget and the real reason for the increase of VAT is the failure to balance the books.

Maimane had a message for those who say the increase was the only way to make up the shortfall: “I say ‘rubbish’. You have not even tried to look for ways to save enough.”

The memorandum handed to Treasury points out that the crippling tax increases were avoidable and that R112-billion in savings and asset sales could be found through:

Instead of taking the lead on slashing waste and trimming the fat, Gigaba’s Budget announced cuts that would reduce service delivery.

These include cuts to allocations to provinces, conditional grants for infrastructure, and the police, among others.

Maimane said there was much talk about a new dawn. He said the new president has made all sorts of promises about doing things differently and he acknowledges that it is a good thing, but the time for promises has come and gone.

“I hope President (Cyril) Ramaphosa enjoyed his honeymoon because it is over. He needs to start acting on all his promises. However, he is not the only member of the government. We also have a new finance minister, (Nhlanhla) Nene,” said Maimane.

Nene, said Maimane, has on opportunity to make an impression with his first big decision in the Cabinet.

“He knows the facts around this Budget and the VAT hike and he knows what he can do to fix it.” DM

Photo: DA supporters make their way to the Treasury in Pretoria to hand over a memorandum calling for the 1% VAT increase to be scrapped. Photo: Puseletso Nthate