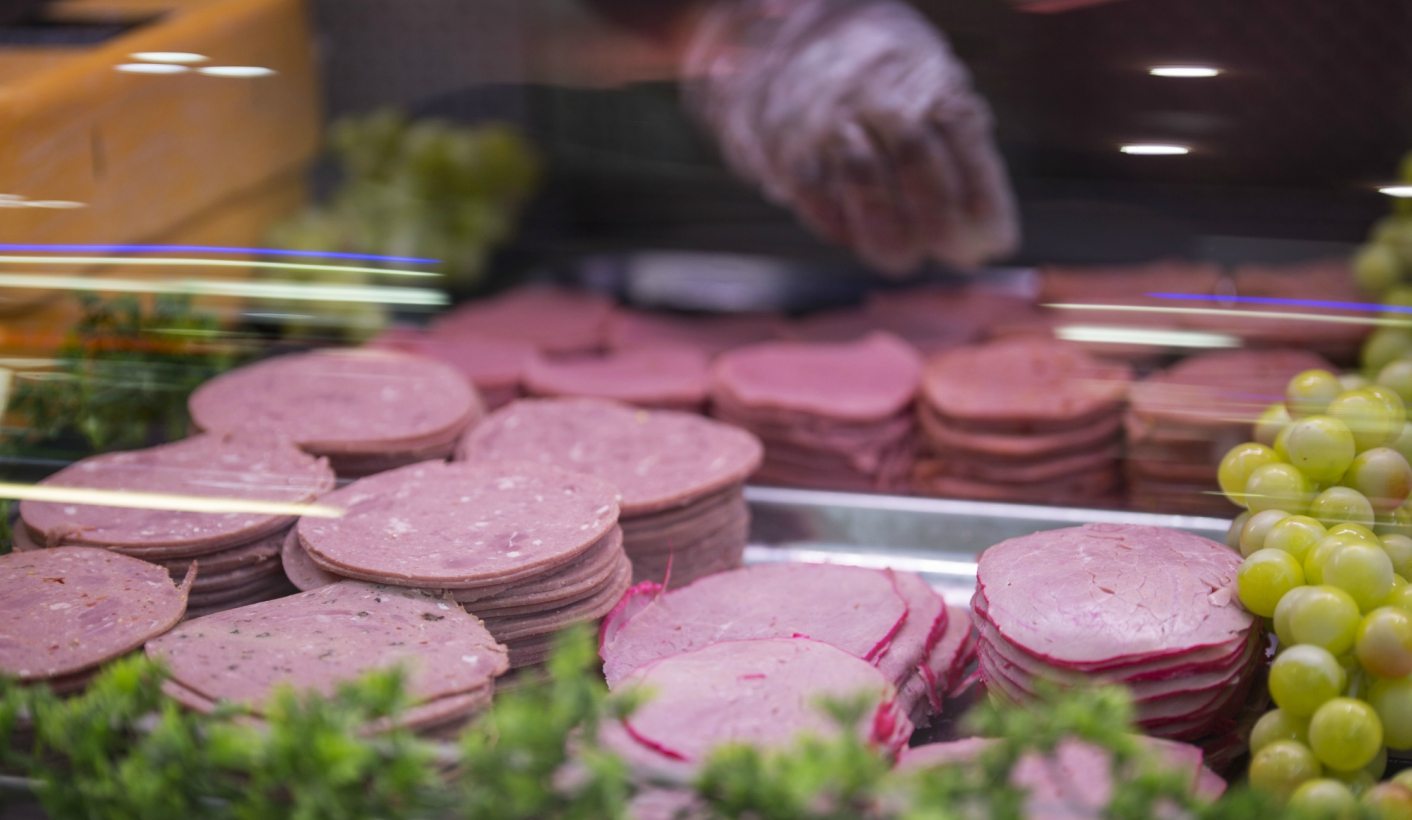 Photo: A deli worker in Cape Town selects processed meat for a customer.

The world’s worst outbreak of listeriosis in history has claimed 180 South African lives and counting. Now, the time-honoured national pastime of finger-pointing and blame-shifting has begun. The Department of Health says an Enterprise Foods factory in Polokwane is ground zero for the current outbreak. The CEO of Enterprise’s holding company, Tiger Brands, said on Monday there was “no direct link” between their products and the disease – but the National Institute for Communicable Diseases begs to differ. Cosatu, meanwhile, maintains that the Department of Health must own up to its poor management of the outbreak. By REBECCA DAVIS.

“There is no direct link between any of the deaths and our products.”

That’s what Tiger Brands CEO Lawrence MacDougall told journalists at a press briefing on Monday afternoon. He was responding to the announcement by Health Minister Aaron Motsoaledi on Sunday that the source of South Africa’s current listeriosis outbreak has been traced to cold meat products emanating from an Enterprise Foods factory in Polokwane.

Pressed by journalists, MacDougall reiterated at least five times that there was no “concrete link” between Enterprise products and the 180 deaths thus far from listeriosis.

“Nothing,” he stressed at one point.

As a result, MacDougall said, the company could not take responsibility for the deaths and would therefore not apologise.

“I can’t apologise for something I’m not clear on yet,” he said.

When a journalist asked cynically how much time MacDougall spent before the press conference preparing his statements with a lawyer to avoid saying anything which could legally implicate the company, the CEO replied: “Doing the right thing and saying the right thing doesn’t need prep.”

“I’m a researcher, scientist and a doctor and I believe in evidence,” the NICD’s Dr Juno Thomas told Daily Maverick on Monday evening, a few hours after MacDougall’s press conference.

“We have conclusive evidence that links the Enterprise Foods factory in Polokwane with the same outbreak strain that patients all across the country have presented with.”

Thomas said that the strain of listeriosis which is making South Africans sicken and die has “exactly the same DNA footprint” as that identified as being carried by Enterprise products.

“There is no doubt in my mind that the foods produced at that factory are the source,” Thomas said. “As far as scientific evidence goes, we have proven this.”

MacDougall took care to present Enterprise and its holding company Tiger Brands as a “consumer conscious organisation”, describing their response to the news that listeria had been detected in products as one of “speed and urgency”.

Though “low levels” of listeria had been detected in only three products, MacDougall said – frankfurters, smoked Russians and polony – the company had voluntarily halted operations at both its Polokwane facility and its Germiston production plant.

“We have acted way ahead of any expectations of the Department of Health,” MacDougall claimed.

NCID’s Thomas warns, however, that the closure of the two Enterprise factories and the accompanying recall of cold meat products does not put an automatic end to the crisis.

Many Enterprise meat products have a long shelf life, she points out, meaning that they could still be sitting in households for some time. While the product recall was issued on Sunday, there is no guarantee that its message will reach smaller shops immediately.

“There will also have been many people who have eaten [these products] already who may still be incubating the disease,” Thomas says.

All in all: “We can realistically expect to see cases going on for a while.”

The Department of Health had not responded to Daily Maverick’s request for comment by deadline on Monday, but the ministry now finds itself in the firing line too.

Trade union federation Cosatu released a statement on Monday blasting the Department of Health for its handling of the listeriosis outbreak.

“The department could have done more to rope in other stakeholders to assist in the awareness campaign”, Cosatu charged.

“These deaths could have been avoided. This is nothing but a failure of political leadership. The ministry and department of health cannot continue to explain away their failures that have deadly consequences.”

But Professor Leslie London, head of UCT’s department of public health, told Daily Maverick that the Department of Health’s messaging around listeriosis has seemed appropriately “active”.

In situations of scientific uncertainty, says London – as was the case regarding the listeriosis outbreak before its origins were traced – it is often difficult to strike the right balance in public messaging between averting panic and accurately conveying the extent of the public health risk.

London says, however, that the number of deaths in this instance speaks for itself as a major problem.

“It all rings an alarm bell: that if there was another kind of [public health] outbreak, would we be prepared?”

In a statement released on Monday evening, the ANC called on the South African Bureau of Standards to “urgently initiate an investigation at various identified food production factories”.

MacDougall claimed, however, that government inspectors looking at the Enterprise facilities declared themselves “very pleased” with the standards of health and safety.

When asked if Tiger Brands expected to be on the receiving end of legal action, MacDougall admitted that the company was “preparing” for this outcome.

Dr Theo Broodryk, head of the University of Stellenbosch law clinic, told Daily Maverick that the possibility of a class action lawsuit against the company could not be excluded.

“It is conceivable that a class action could be instituted for damages relating to personal injuries, including the deaths of numerous individuals, resulting from the listeriosis outbreak,” Broodryk said.

Such a case would be rare. Broodryk says that the only mass personal injury class action that has been certified by a South African court to date was a 2016 case brought by mineworkers who had contracted silicosis in the course of their employment.

Broodryk also points out that a class action suit against Tiger Brands would present some challenges.

“Proving that the consumption of the product caused the illness or injury, or perhaps even death, may in certain circumstances, such as where an individual already has a pre-existing illness, also prove difficult,” he says.

If every South African who bought an Enterprise meat product over the last year tried to join the class action, it “could make the class definition over-broad and the class action trial unmanageable”.

But in theory, says Broodryk, class action lawsuits in situations such as these could help foster a more accountable and responsible corporate culture in South Africa. This is particularly the case where the plaintiffs lack the resources to pursue legal action individually.

It is impossible to ignore one aspect of the listeriosis crisis: that the meat products responsible for spreading the disease are favoured mainly by poorer South Africans due to their relatively low cost.

On Monday, one journalist sought to make this point by asking the gathered Tiger Brands officials when last they had eaten an Enterprise meat product.