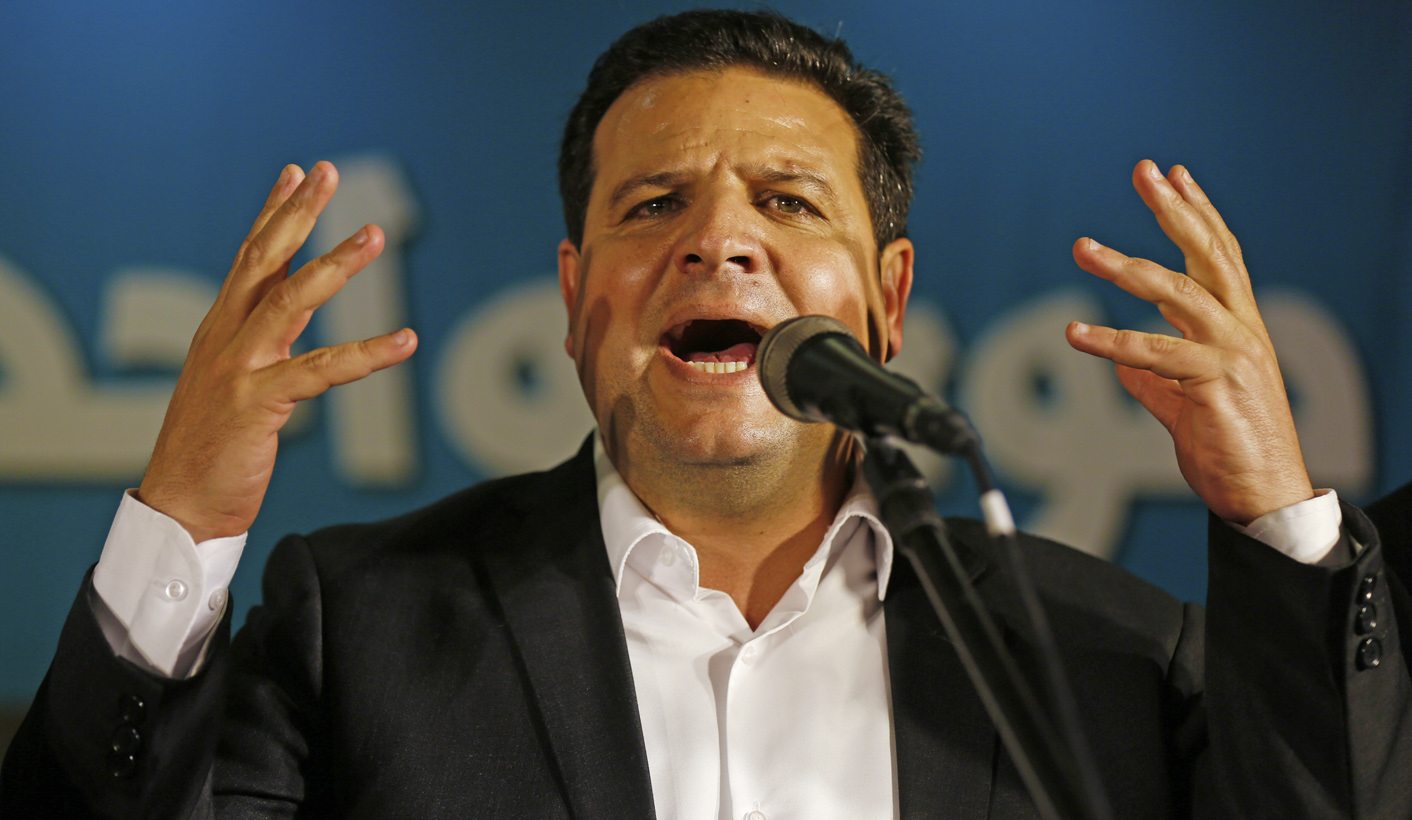 Encountering two Israeli Arab politicians, J. BROOKS SPECTOR runs head-long into some of the many puzzles of Middle East politics, especially since one of the visitors is a real member of the Israeli parliament, while the other is a member of the Israeli Communist Party and a water expert.

A meeting with Ayman Odeh and Mustapha Abu Raiya during their visit to South Africa (arranged in association with the Afro-Middle East Centre) is a meeting with a whole roster of potential contradictions and conundrums.

Odeh is from the city of Haifa in northern Israel. He is a lawyer and, since the most recent parliamentary election in 2015, has been an elected member of the Israeli parliament, the Knesset, as part of the Joint List, a group of largely Arab Israeli parties – although some members in the parties are leftist or non-Zionist Israeli Jews.

Odeh now heads this Joint List, even though he is a relative newcomer to the rough and tumble of politics. It is important to recognise that being a member of the Knesset is no Middle Eastern equivalent to membership of that old and justly reviled South African tricameral parliament.

In a 2015 interview with The Times of Israel, Odeh explained that the Joint List’s programme agenda included a 10-year plan to tackle issues specific to the Arab population, including employment opportunities for women, the rehabilitation of failing regional councils, the recognition of the heretofore unrecognised Bedouin communities in the Negev Desert in the South of the country, better public transportation in Arab towns inside Israel, and eradication of violence. He added that he supported the right of the Jewish people to self-determination in Israel, adding that a Palestinian state should fulfil the same goals for Arab Palestinians.

In a televised debate for the March 2015 election, Odeh had his breakthrough moment when Avigdor Lieberman, the Israeli foreign minister, labelled Odeh a “Palestinian citizen”, arguing that Odeh was not welcome in Israel.

In reply, Odeh said, “I am very welcome in my homeland. I am part of the nature, the surroundings, the landscape” – thereby contrasting his birth in Israel with Lieberman’s immigration from the former Soviet Union. Ouch. Touché. Odeh has been known to quote Martin Luther King Jr in his speeches and other remarks.

Abu Raiya, a pharmacist by training, is currently the CEO of Galilee Water and a member of the Israeli Communist Party, one of the four parties in the Joint List. Galilee is the part of Israel that houses the largest number of Israeli Arabs. Given their increasingly important position in the Knesset, Joint List leaders have engaged with other centre-left parties in the Knesset, and they traded seats on the International Affairs and Defence Committee in order to gain seats on the Finance Committee – in order to have a more direct say in steering benefits towards their constituency. Real politics, that.

The Joint List now holds 13 seats in the 120-seat Knesset, making it the third largest parliamentary party in the country. Although perhaps a political pipe dream, conceivably, the Joint List might become the deciding element in the formation of a centre-left parliamentary majority in a future election, defeating Binyamin Netanyahu’s – or his successor’s – Likud Party. In that case, there would be a strong case for one or two of those Joint List Knesset members to enter into a future coalition cabinet.

Think about that for a moment. Contemplate what cabinet positions Joint Listers might hold in such a political future, and how that might affect the sense of nationhood and national identity in Israel for Jews and Arabs both. Of course, that supposes a close competition between Likud and the Labour Party, along with their various smaller parties, in the election results, putting the Joint List in the catbird seat vis-a-vis Labour, in order to form a governing coalition for Israel.

According to Israeli population data, the Joint List’s actual haul of parliamentary seats is slightly under the share of Israel’s population comprised of Arab citizens, due to a lower than the national percentage of voter turnout among that population.

(To make it clear, the Joint List represents Israeli citizens, not Palestinian residents in the West Bank and Gaza territories who are not included in that population. As such, that group obviously has no opportunity to vote for members of Israel’s parliament and must content themselves with representation by the Palestinian Authority both internally and internationally.)

Recently, Odeh and his Joint List colleagues became international media celebrities when they carried out a noisy protest inside the Knesset chamber, just as US Vice President Pence was poised to address the body. Pence’s visit closely followed on President Trump’s announcement that he had unilaterally decided the US would recognise Jerusalem as Israel’s capital and move its embassy there. It was a decision that was, to say the least, greeted with incredulity over its diplomatic self-defeatingness, both within the US for many and almost universally on the international scene.

International news channels then showed those Joint List members being ejected from the hall during their protest by security officials. It was a scene that might have had some South Africans shaking their heads in recognition of its similarity to Julius Malema and his EFF’s ejection from their own National Assembly a year earlier.

In speaking with the two visitors, the writer is reminded of the 19th century Austrian composer Gustav Mahler’s rueful comment about his own predicament as he had written, “I am thrice homeless, as a native of Bohemia in Austria, as an Austrian among Germans, and as a Jew throughout the world. Everywhere an intruder, never welcomed.” There are obvious echoes of Mahler’s angst in Odeh and Abu Raiya’s respective political circumstances.

In their case, they are Arabs in a predominately Jewish Israeli sea, even as, by virtue of the gap between Israel and the broader Arab world, they can express feelings of lost – or at least distant – connections from the Palestinians just over the next hill, as well as with the much larger Arab umat. In political terms, as Odeh explains it, the Arab Israeli community has a special role in which they should be able to serve as a kind of bridge between Israel (and, in particular, Jewish Israelis) and the Arab world. But sadly, with one of those philosophical-style, world-weary shrugs, no one nowadays seems particularly prepared to cross that bridge.

To talk about the complexities of Israeli politics, Odeh similarly expresses regret that Yitzhak Rabin – the assassinated prime minister – was no longer astride Israel’s political scene. He had been a hope for the future on the part of many Arabs and Jews alike. With that, Odeh gives a deeper insight into his political views. He is no arm-waving barnburner, in the manner of those who would wipe away history and impose a new order via the sword (and this may disappoint some who want to see in him something rather different). He is a lawyer making his case.

Or, as he puts it, he wants to see two states where there is now one-plus state, along with two occupied, un-free zones – the West Bank and Gaza. But the creation of this second state would be one that can place its capital in East Jerusalem. To articulate this is to acknowledge that Odeh’s view of the future fully rejects the continued expansion of Israeli settlements into the West Bank, along with the incorporation of strategic spaces in and around Jerusalem into the Israeli polity. Still, as knowledgeable Israeli friends say, Odeh “is a serious guy” – and someone to be reckoned with in the hard political slog up ahead.

Inevitably, our conversation turns back to the nature of identity. To ask, “Who are you?” generates something of the look the writer sometimes sees on the faces of his own children, what with their mixed racial and ethnic heritage and their varied experiences living around the world and the consequent holding of two citizenships. In Odeh and Abu Raiya’s cases, it is the simultaneous blending (and separating) of Israeli, Arab, and Palestinian identities, pointing to the complications such things can be for an individual person with multiple (but not fully divided) loyalties.

Over a decade ago, after a journey to the part of Israel where both Odeh and Abu Raiya hail from, I had written elsewhere,

“Towards the end of this journey, Haifa-based Arab activist and writer Jafar Farah speaks during afternoon tea about how television, cinema, the media – and, of course, the theatre – are central for giving Israeli Arabs the strength to take ownership of their own local and national civic turf in the space between Israeli Jews and West Bank Palestinians.

“This discussion also triggers memories that bear the hallmarks of so many South African conversations about theatre and politics from some two decades earlier. In this same city, there are other approaches, of course. Israelis (Jewish and Arab) from the Beth Hagefen movement work to create a shared civic consciousness for the two communities, using a city festival with music, crafts and street theatre and the creation of ‘memory trail’ art installations erected throughout Haifa’s downtown neighbourhoods. While not traditional dramas in formal theatres, this project clearly offers many a real sense of future possibility.”

The efforts of people like Jafar Farah, and Ayman Odeh and Mustafa Abu Raiya, point to the possibilities of a future that is not inevitably bleak – or black and white.

Before we take our leave of the two visitors, I ask Odeh and Abu Raiya their views about some of the other conflicts taking place in the Middle East. Eliding tactfully around the specifics of the on-going tragedy in Syria, Odeh speaks of the emerging tacit alliance between Israel and Saudi Arabia, supported by the US, against Iran and Hezbollah in Yemen and Syria. This continues to lead to greater instability in the region and thereby harms the possibilities of Israeli-Palestinian rapprochement.

Odeh and Abu Raiya both have chosen a difficult path: away from stolid resistance and for a sustained engagement with the nation that surrounds them in order to change it. It is hard not to admire their grit, even though their current circumstances might make that task seem almost Sisyphean. DM

Photo: Ayman Odeh, head of the Joint List, a political alliance of four Arab-dominated parties, speaks to his party supporters after the first results of the polls for the Israeli general elections closed, in the Northern Arab city of Nazareth, Israel, 17 March 2015. EPA/ATEF SAFADI