UN: SA opposition to holding urgent debate on Syria a ‘worrying example of siding with dictators’ 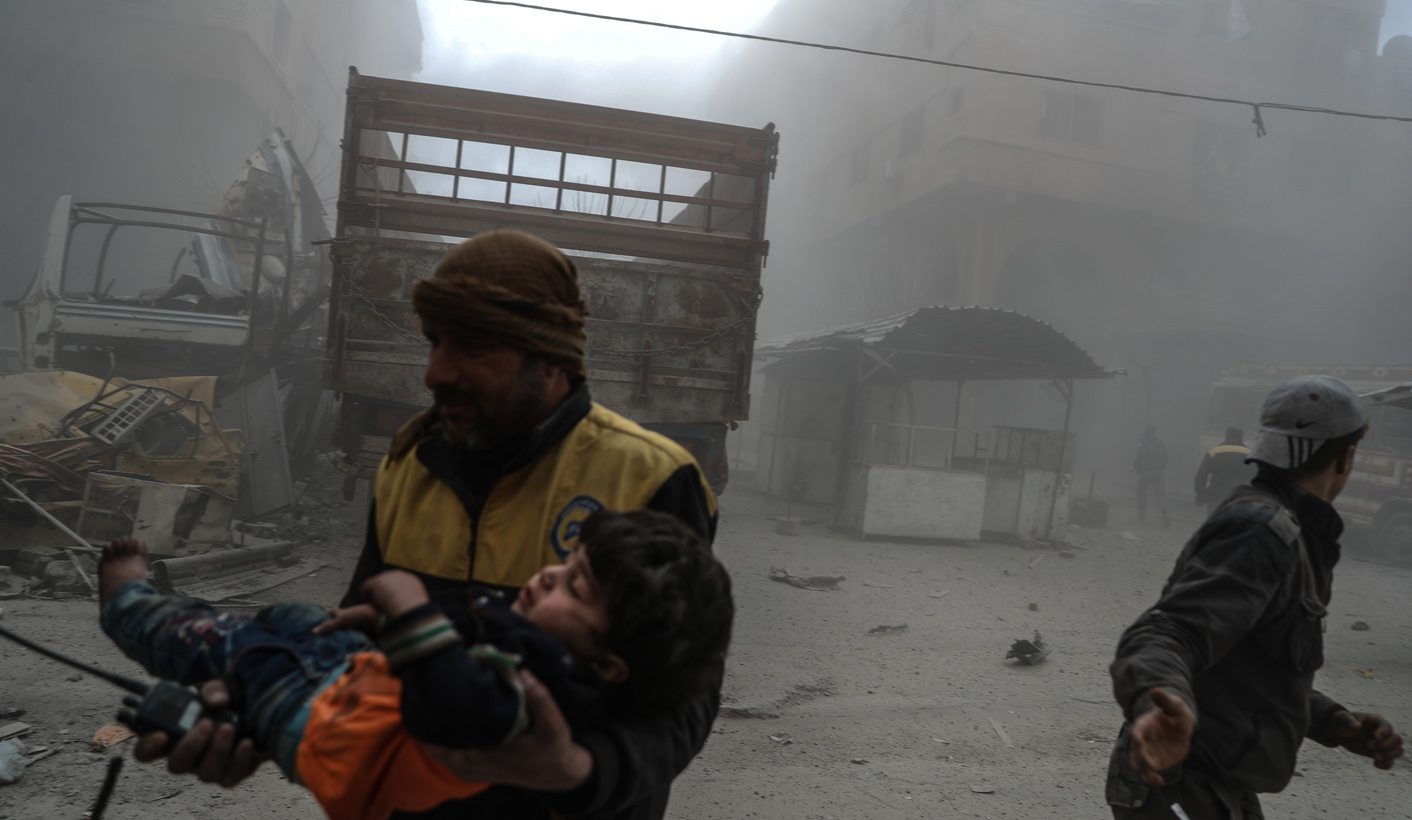 In opposing an urgent debate on the Syrian crisis in the UN Human Rights Council in Geneva, South Africa joined countries like Syria itself, China, Venezuela, Russia and Cuba. By PETER FABRICIUS.

Most of the world is appalled by the plight of innocent Syrian civilians caught in the crossfire of the brutal seven-year old civil war, particularly the 400 men, women and children now trapped under Syrian government bombardment in Eastern Ghouta, near the capital Damascus.

But on Friday South Africa argued against the holding of an urgent debate on the Syrian crisis in the UN Human Rights Council in Geneva. Pretoria cited procedural grounds, saying the council had not been given enough notice of the urgent debate and that Syria was due to be discussed anyway, later in the council’s session.

South Africa joined countries like Syria itself, China, Venezuela, Russia and Cuba in opposing the debate. The resolution to hold the debate was carried nonetheless by a large majority and during the debate later on Friday UN Human Rights Commissioner Zeid al-Hussein called for Syria to be referred to the International Criminal Court.

To Hillel Neuer, executive director of UN Watch, an NGO closely monitoring the UN Human Rights Council, this was another worrying example of South Africa siding with dictators rather than democrats on international human rights issues.

He tweeted: “South Africa took the floor @UN_HRC to oppose an Urgent Debate on latest massacre in Syria, objecting on grounds of “time efficiency”. When it came to a vote, they were absent. Is this the country of Nelson Mandela? @GovernmentZA, tell us more about your “Human Rights Month”.

The last point referred to a post on the South African government’s Twitter account which said, “Good morning. Did you know? March is Human Rights Month. Government commemorates this month to remind all South Africans about the sacrifices that accompanied the struggle for the attainment of democracy in South Africa.”

South Africa was clearly on Neuer’s mind because he has just visited this country, speaking to students, MPs,  the Zionist Federation of South Africa and other groups.

In an interview in Johannesburg Neuer was asked about South Africa’s UN voting record. He said:

UN Watch surveyed South Africa’s voting record at the UN from 2014 to 2018 and concluded that “South Africa was often siding with the perpetrators” of human rights abuses rather than the victims.

At the UN Human Rights Council, Pretoria abstained in 2017 from resolutions condemning human rights abuses in Syria and in Belarus and from one extending the mandate of the special rapporteur on Iran.

In 2016 South Africa abstained from a resolution appointing a special rapporteur on violence against gays and voted against a resolution condemning human rights abuses in Iran.

“South Africa sits on a committee on NGOs which votes on which groups get NGO status at the UN and often South Africa sides with the majority of dictatorships and votes against NGOs,” Hillel added.

“That’s problematic and that’s not consistent with the legacy of Mandela.”

Hillel dismissed South Africa’s contention that it hadn’t lost its focus on human rights but that it was emphasising the right to development rather than political and civil rights.

For example, at the UN Human Rights Council last week Deputy Minister of International Relations and Co-operation Luwellyn Landers warned, “We need to prevent the misuse of human rights as an instrument for advancing political agendas of individual countries”, and that the council should not emphasise political and civil rights at the expense of “The Right to Development”, saying this was guaranteed in the South African Constitution.

Democracies were usually the last places in the world where you had starvation, for instance, “because if people are starving they will speak out and the government has to react”.

People were starving in Venezuela even though it had the largest oil reserves in the world because it didn’t have property rights and because of the government’s policy of centralising control.

Development need not come at the expense of individual human rights, he said.

“So it’s the rhetoric of certain governments, usually dictatorships which South Africa should not be endorsing.”

UN Watch focuses on what it regards as the disproportionate emphasis of the UN Human Rights Council on Israel, which accounts for more resolutions than any other country by far.

Does this focus of UN Watch on defending Israel indicate a bias, considering Hillel himself is Jewish?

“The opposite is the case,” he insists. “Our organisation was founded to fight a bias.”

He explains how UN Watch founder Morris Abram had been a civil rights leader fighting for black rights in the US.

When he became US ambassador to the UN Human Rights Commission (as it was then called) in Geneva, “he saw how 50% of the commission’s time was spent adopting one-sided resolutions against Israel”.

So when he retired he founded UN Watch, which is still “the leading group fighting the UN’s self-destructive obsession with demonising Israel. So if we have a bias, it’s fighting prejudice, just like Morris Abrams had a bias, if you want to call it that, which was fighting against prejudice in America.”

And so UN Watch puts the spotlight on what it regards as the real human rights offenders, for instance at its recent,10th summit on human rights and democracy in Geneva where it showcased “25 different heroes from around the world”, former political prisoners from Iran, China, Cuba, Venezuela, Pakistan, Turkey and other countries.

Hillel said some other human rights groups, such as the better-known Human Rights Watch and Amnesty International, were left of UN Watch (which he said was in the centre) in the political spectrum and so were more inclined to turn a blind eye to human rights violations of leftist governments, such as Venezuela’s.

They were also more prone to an ideology of “cultural relativism” which made them hesitate to speak out against Iran’s law forcing women and girls to wear a hijab, for example.

“They will say it doesn’t matter. But if you’re a woman or girl, it does matter,” he insists, extolling the Iranian activist Masih Alinejad who has launched a campaign against the forced wearing of the hijab, mainly through her website My Stealthy Freedom.

Hillel sees the same double standards in South Africa’s “surprising” recent decision to downgrade diplomatic relations with Israel as he sees in the attitude of the UN Human Rights Council towards Israel.

“That’s in a region where you have murderous Sunni ideologies like ISIS, failed states that have led to genocide in Syria, where about half a million people have been killed, millions more exiled or fled; Yemen completely failed as a country; thousands killed there. Next to Israel you have Sinai which is an ISIS stronghold, a failed part of the Egyptian state.

“You have Hamas in Gaza which has an anti-Semitic ideology and openly seeks to kills Jews… extreme Shiite terrorist groups like Hezbollah… which supports Iran… aiding and abetting the Syrian genocide. And failed states all around; Libya, Iraq.

“Then you have Israel which is not perfect, but in that region is a shining beacon. It is a liberal democracy, flawed, but it is a liberal democracy where prime ministers get put in jail, where the current prime minister is being investigated very seriously by the police. Where two million Arabs vote, where a 10th of the Israeli Parliament are Arab members of Parliament. There are Arab judges. It doesn’t mean they don’t face discrimination like in other countries. It’s an ethnic minority which faces challenges.”

But among all of these, to “stereotype Israel as some kind of racist evil regime” is inconsistent with the facts. It is also absurd “ to downgrade relations with Israel but not with Iran, not with Syria, not with the Palestinians who say that Hamas is in their government, not with Saudi Arabia…

“The question is: a downgrade, is that a routine procedure that South Africa does for countries? We don’t see it. On the contrary at the United Nations we see South Africa often votes with regimes that have very problematic human rights records. I don’t see any downgrades there. The question is why the double standards?” DM