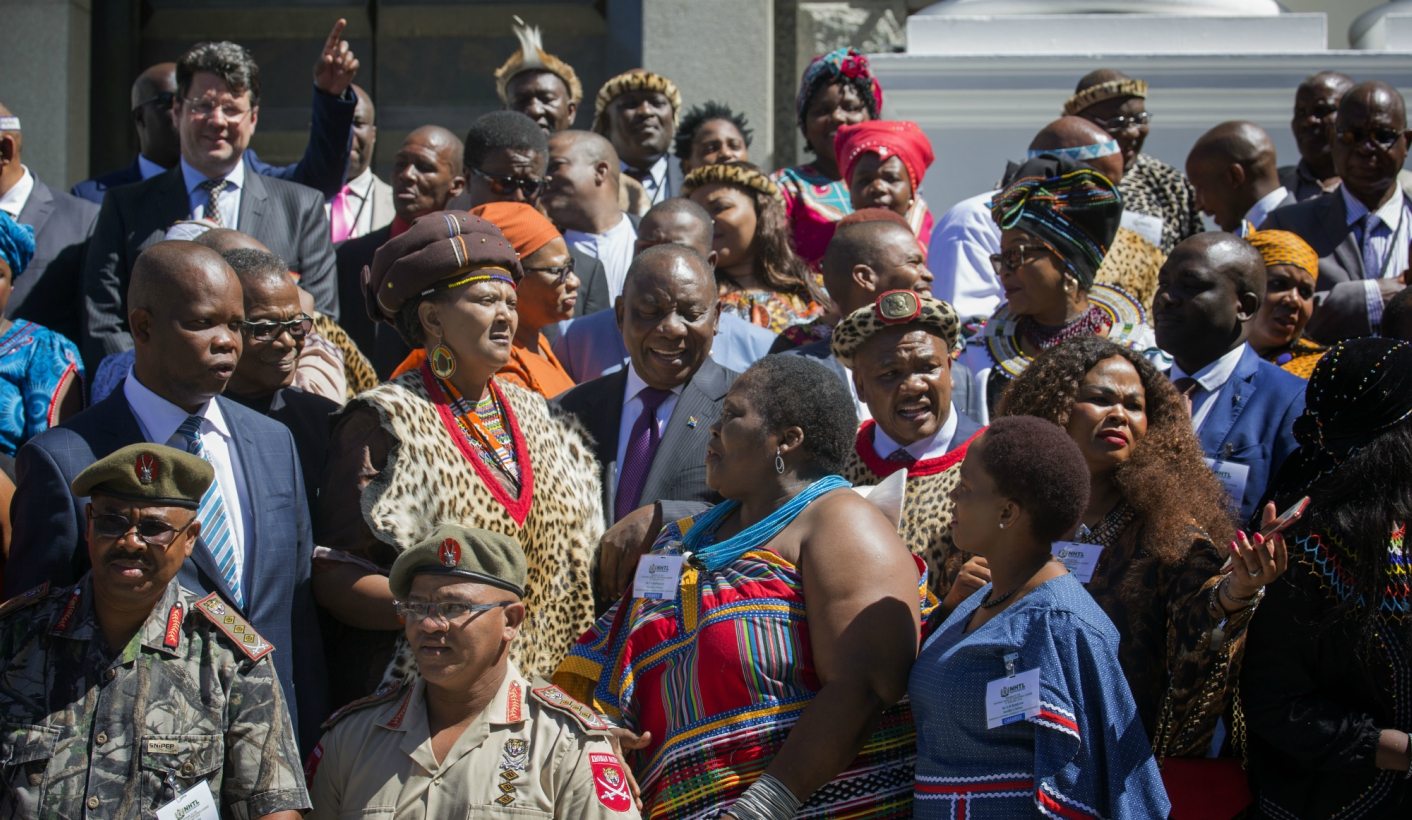 President Cyril Ramaphosa urged traditional leaders to be accountable when he opened the National House of Traditional Leaders on Tuesday, reminding them that their greatest source of legitimacy must come from the people they govern. In the same speech, however, he said that the Traditional and Khoi-San Leadership Bill (TKLB), which deeply undermines that accountability, must be fast-tracked in the National Council of Provinces. By ANINKA CLAASSENS.

Hidden among the detail of the 99-page bill that is justified as finally including the Khoi and San communities, the TKLB includes a crucial clause that would empower traditional leaders to sign agreements with investors in respect of communal land without obtaining the consent of those whose customary land rights are at issue.

The bill would provide a veneer of legality to the widespread, but unlawful practice of traditional leaders signing deals with mining houses in respect of communal land without prior consultation, or accountability in terms of the revenue generated. This practice has precipitated a wave of violent protests across the platinum belt in North West Province and Limpopo, and in other former homeland areas where minerals such as iron, coal and titanium are concentrated.

Recent investigations have laid bare the scale at which poor rural people are losing out through mining deals. It is massive.

Government is deeply implicated. The account from which the R600-million of the Bapo ba Mogale went missing is held in the North West Premier’s office and supervised by officials of the Department of Traditional Affairs. The office of the Auditor General has confirmed in public hearings that the account has never been audited despite this being a legal requirement.

At the same time, Premier Supra Mahumapelo refused to depose both the Pilane and Mogale traditional leaders, who were implicated in these serious financial irregularities, despite the recommendations of a Commission set up to investigate the legitimacy of traditional leaders and which recommended that they be replaced.

Many of the traditional councils involved in dubious mining deals have no legal standing because they have failed to comply with legal provisions requiring them to include one third women and 40% elected members. The Department of Traditional Affairs cites this failure to transform as the reason for an amendment to the Traditional Leadership and Governance Framework Act (TLGFA) that is currently before the National Council of Provinces. Rather than address the failure to transform, the amendment removes the consequence of legal invalidity for non-compliant traditional councils.

The thrust of the bills before the NCOP – the TLGFA amendment and the new TKLB – is to deal with the fact that traditional leaders do not currently have the legal standing to contract with mining houses in relation to communal land. Only the Minister of Rural Development and Land Reform, nominal owner of the land on behalf of the communities who live on it, has this authority. And he or she is bound by the Interim Protection of Informal Land Rights Act to obtain the consent of those whose informal land rights (as defined in the IPILRA) would be affected. If they do not consent, their rights must be expropriated.

Yet the previous minister, Gugile Nkwinti, stepped back in contravention of his legal and fiduciary responsibilities and ceded his authority to traditional leaders. The TKLB, which President Ramaphosa now says must be fast-tracked, attempts to legalise this abrogation of state accountability to ordinary people by, for the first time, explicitly empowering traditional leaders to sign such deals.

According to the Chamber of Mines, the Department of Mineral Resources advises their members to deal directly with traditional leaders. Mining companies have privileged the DMR’s advice over the law, in much the same way as many accepted DMR officials’ advice about politically connected BEE partners, rather than including affected communities as BEE shareholders. It is only because the mining houses have played along with parts of government that the consent and compensation requirements in IPILRA have been circumvented and no effective financial oversight is in place to guard against the theft of mining revenue that has happened to the Bapo ba Mogale, Bakgatla ba Kgafela and other communities.

The result is recurrent violent protests along the platinum belt in response to the loss of livelihoods, the moving of homes and graves, the confiscation of ploughing fields, the destruction of water sources and broken promises of local employment. Far from mining bringing a new dawn for local communities it is a curse that has destroyed rural livelihoods, divided communities and seen billions siphoned out of South Africa through deals which, because they are secret, are easy for mining magnates to manipulate.

A speaker at the KwaZulu-Natal public hearing of the recent High Level Panel led by Kgalema Motlanthe explained it thus:

“Investment deals are concluded by the traditional leader without consulting with, or even informing, the community, who simply see bulldozers and trucks on the job. Dynamiting operations crack the walls of houses; coal dust covers roofs so that it becomes impossible to harvest rain water; the same soot covers grass and renders it unfit for grazing. The traditional leader does not want to account, refuses to attend meetings.”

Another speaker from KwaZulu-Natal said:

“We live in great hardship in South Africa. We are dispossessed of our land by development, by the mines, and we get no compensation or benefits out of the so-called development on our ancestral land. We are not consulted. We have turned into non-entities with nothing, and yet we are the rightful owners of the land.”

The President’s State of the Nation Address held out the promise of a new dawn for mining. The Mining Charter was to be renegotiated and the Mineral and Petroleum Resources Development Amendment Bill finalised on the basis of inclusive consultation involving all parties, including communities. Within a week, however, the Presidency failed to include the community applicants when it negotiated a deal with the Chamber of Mines to postpone litigation about the Mining Charter. It was left to the North Gauteng High Court to order the Chamber and the Presidency to include the community applicants in their negotiations going forward.

The Constitutional Court has consistently ruled in favour of the rights of rural communities in the face of government attempts to elevate the interests of traditional leaders over those of ordinary people, but the import of these rulings is often ignored by lower courts and government officials.

The TKLB, which contradicts these important rulings, will not survive constitutional scrutiny for many reasons. The simplest is that it pre-empts accountability by traditional leaders. This is why the President’s speech opening the House of Traditional Leaders is a contradiction in terms.

Rural people are not suffering in silence. They have spoken out fearlessly and explicitly in the public hearings convened by the High Level Panel and public hearings about the TKLB. The report of the panel recommends that both the TKLB and TLGFA Amendment Bill be urgently reviewed in the light of the evidence collected by the panel. In province after province, people insisted that they are not blaming the institution of traditional leaders so much as they are blaming politicians and officials whom they described as vultures swooping down to the steal their land. A speaker in Limpopo said that it is government who is responsible for corrupting “our traditional leaders” by giving them powers that are unaccountable.

The TKLB is an attempt to legalise the shaky contracts that traditional leaders and mining houses have used to the detriment of the livelihoods and land rights of ordinary South Africans. For President Ramaphosa, who is steeped in mining at the levels both of worker and of owner, to support it, is to admit that there is no vision to include the people directly affected by mining in decisions that impact on their lives and on their land rights – or to ensure that they are fairly compensated.

The North West Province is the epicentre of contested mining deals. Support for the ANC declined by 14% in the province during the 2016 local government elections. Rural people are saying loudly and clearly that they will no longer support a political party that is complicit in their ongoing dispossession. It is not white title deeds that are in jeopardy in South Africa. It is the property rights of those who bore the brunt of forced removals and Bantustan rule. DM