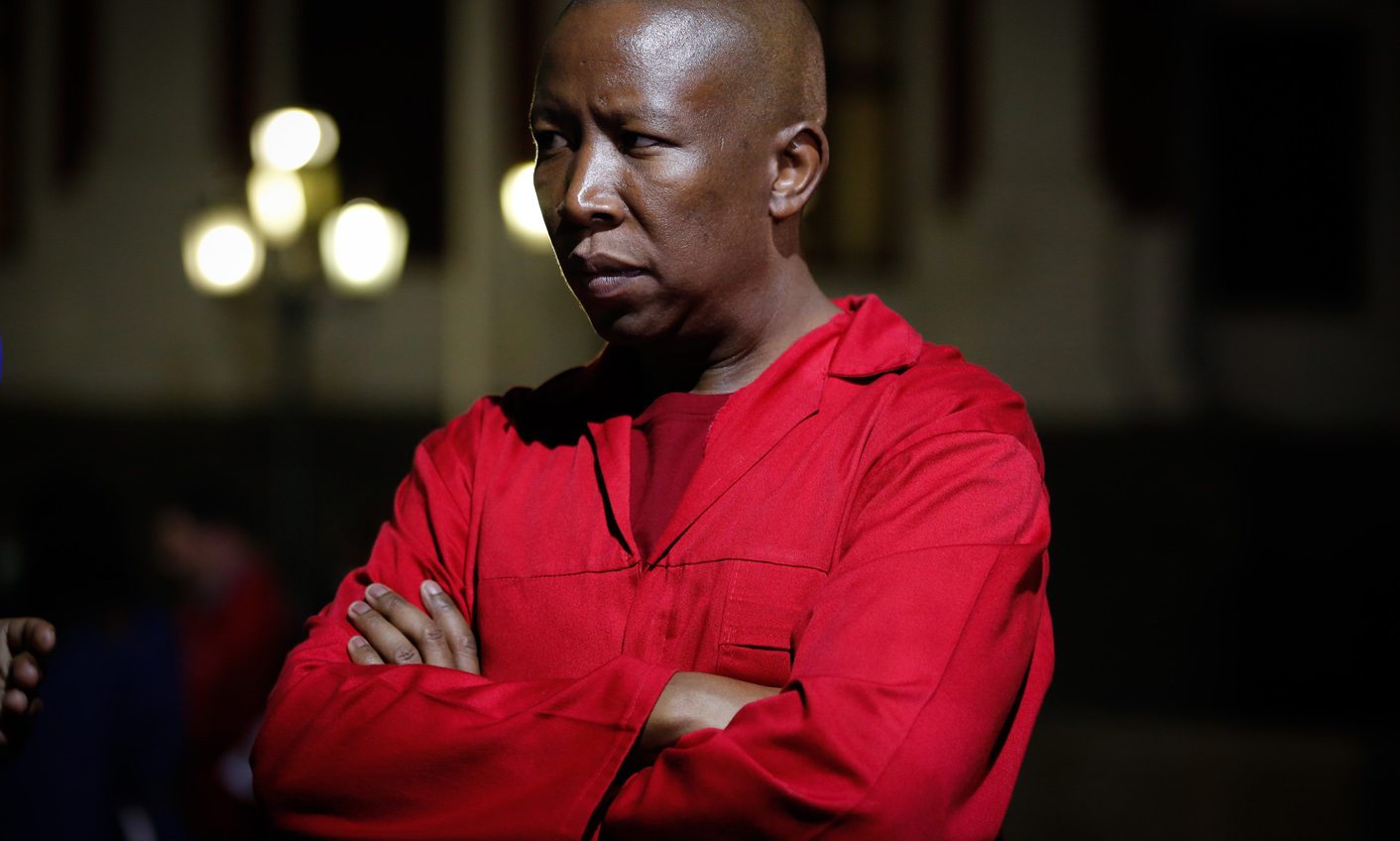 Julius Malema addressed his party’s election registration campaign on Sunday, riding on the success of the land expropriation vote and amid threats to remove the “racist” DA’s Nelson Mandela Bay Mayor Athol Trollip. Welcome to the uncertainty of going into elections defined by coalition politics. By GREG NICOLSON.

In a statement on Friday reiterating the EFF’s commitment to voting against Nelson Mandela Bay Mayor Athol Trollip in a 6 April no-confidence motion, the party claimed DA backbenchers were insensitive during this week’s debate on investigating constitutional amendments to allow for land expropriation without compensation.

“We view the attitudes as racist, and in defence of white privilege,” said spokesperson Mbuyiseni Ndlozi. “Land dispossession in South Africa is the whole foundation for the indignity of black people and the supremacy of whites.”

Malema’s party focused on building its structures in 2017 and this year we have already seen a more activist EFF, moving from tackling former President Jacob Zuma to demonstrating on issues like education, land reform and health. To improve its vote in next year’s elections and take a stronger role in potential coalitions, the party will have to target voters who still don’t trust the ANC and are vulnerable to claims that the DA is not transformed.

“We will remove Trollip as a mayor to communicate, provoke and impress on all DA white members that sensitivity to land loss by black people is a fundamental requirement for leading anywhere in the country,” said Ndlozi.

The DA is reporting Malema to the Equality Court for hate speech. He said removing “your white man in PE” would “cut the throat”. The EFF says it was a figure of speech.

Anything could happen in Nelson Mandela Bay, which the DA took after winning almost 47% of the vote in the municipal elections and forming a coalition with the UDM, Cope and ACDP. The UDM left after Trollip sacked its deputy mayor Mongameli Bobani, leaving a precarious leadership.

The no-confidence vote will be tight. Nelson Mandela Bay has 120 seats and 61 votes will remove Trollip. The DA, ACDP and Cope have 58 seats. The ANC has 50, the EFF six, and the UDM two. The Patriotic Alliance, United Front and African Independent Congress each have one seat. One seat is vacant and will be decided in an 8 March by-election. The DA won the ward by 85% last year, most likely giving it another seat.

The EFF, ANC, UDM, PA and AIC, with a combined total of 60 seats, have said they will vote to remove Trollip. If the DA wins the by-election, with Cope and the ACDP it will have 59 seats. The United Front, with one seat, has said it is still deciding how to vote.

The parties have a month to lobby potential allies and the DA and ANC could offer executive positions to win votes and get parties to shift their positions. If the vote is secret, councillors could go rogue. The DA lost Mogale City last year after councillors within its party or coalition, and most likely the EFF, voted against the party line and returned the ANC to .

Trollip has said an ANC government, supported by the EFF, would damage service delivery and lead to corruption. In a statement on Friday, he said the opposition parties this week rejected a “pro-poor adjustment budget”. “It is clear that the ANC and EFF do not want services to be delivered to our city’s poor. They are power hungry populists more interested in lining their own pockets than delivering services to the people,” he said.

The DA says it is committed to land reform, arguing that to maintain property rights and implement the current restitution and redistribution system more effectively, claiming expropriation will hurt the poor and undermine the economy. Both parties were upfront about their positions on land reform during negotiations in 2016.

“We never hid it from them that given the opportunity to punish racism in their ranks, we will do so by using our voting power,” said Ndlozi.

The EFF might just be making a threat on removing Trollip and could be judged harshly for removing the DA, which significantly beat the ANC in the elections. Malema has before said electing the DA in Tshwane and Johannesburg (the DA didn’t need the party’s votes in Nelson Mandela Bay) was not an effective solution for leadership. He said the party had to choose between “two ” and the first step was to fight corruption and remove the ANC.

Crispian Olver’s book How to Steal a City provides a damning and depressing insider account of corruption in Nelson Mandela Bay under the ANC. The EFF has committed to voting for an ANC mayor if the right candidate is presented; “such a person has to be a Mcebisi Jonas or come close to him in terms of integrity, anti-corruption and leadership qualities,” said the EFF.

Politics is a dirty business and coalitions throw chaos into the mix. President Cyril Ramaphosa’s election was a windfall for the ANC. In three large metros, the DA is getting the chance to prove its claim that where it governs, it governs better. While Ramaphosa is adept at undercutting both opposition parties, the EFF has to position itself as the best option for voters demanding immediate change on social and economic issues.

It’s not hard to criticise the DA as racist and Malema’s latest attack couldn’t come at a worse time for the party. As it tries to limit the damage of the Cape Town water crisis, Mayor Patricia De Lille has become the latest black, female DA leader to have been ostracised. It’s an easy target for the EFF and the ANC.