Analysis: The particularly precarious position of one David Mabuza 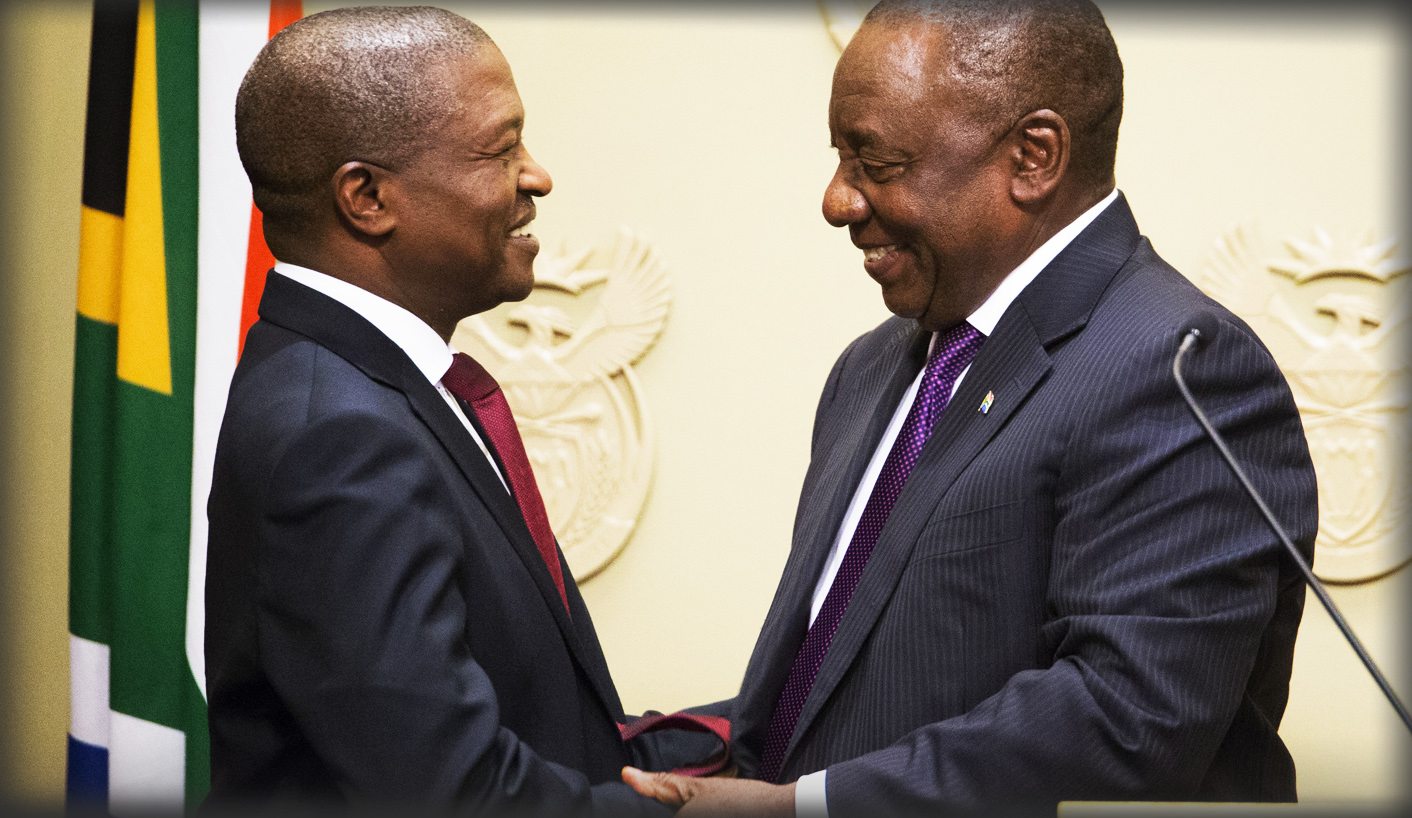 Perhaps the most important decision announced by President Cyril Ramaphosa last week was the appointment of David Mabuza as Deputy President. Mabuza’s track record and the way he has parlayed a support base in one province into the second most important job in the country has led to fears that he may one day be able to succeed Ramaphosa. In the world of realpolitik, Mabuza’s position appears to be particularly complicated. He has no real legal power now, and surely cannot rely on a national support base. And to make matters even more difficult for him, he must have angered significant sections of the ANC through his actions at Nasrec last year. By STEPHEN GROOTES.

Over the weekend the Acting President of the Republic of South Africa was David Mabuza.

President Cyril Ramaphosa was in Botswana and Angola, which meant that under the Constitution, Mabuza got to be in charge for the first time.

Of course, he didn’t have any real power, and any decisions he made could simply have been reversed when Ramaphosa returned home. But the fact that this happened at all drove home exactly how difficult things are in the ANC right now. It also seems that Ramaphosa’s Mabuza appointment then freed him to make all the appointments he wanted. One appointment in a position of no real power, Mabuza’s, in turn made possible that the crucial portfolios of Finance, Police, State-owned Enterprises, Mining, and Energy are now in the hands of reasonable people who would make sure South Africa sees the end of the worst excesses of the Zuma-Gupta era.

Considering that Mabuza has been accused of corruption himself, and, through an affidavit, taking part in a murder, his new national position might look quite scary. It seems obvious that he has been running a full-scale patronage network in Mpumalanga, and thus would be the kind of president who would make Zuma look unaccomplished and almost innocent. Mabuza at Nasrec also received more branch nominations than anyone else in the ANC’s Top Six, which some might see as an indication that he has strong support in the party. And coupled with the ANC “tradition” that the deputy succeeds the president, some wonder aloud if our current “Ramaphoria” is just a momentary interlude.

And yet, that does not seem likely to be true.

The real source of Mabuza’s power at Nasrec was not that he has overwhelming support from branches on the ground, or that he has a national following in the party – it was that the race between Ramaphosa and Nkosazana Dlamini Zuma was so close. He held the deciding delegates, which made him the kingmaker. That has given him, in some eyes, the perception of having immense power. But the deciding factor in this race was all that he had. If the two main factions had not been so close, his delegates would not have mattered. Translating what was a deciding, but small, factor into ultimate victory for the leadership is by no means guaranteed.

Then there are the consequences of his actions at Nasrec. Of course, those actions have won him the deputy presidency. But they have also surely not endeared him to those who campaigned for Dlamini Zuma, because of the obvious sense that he betrayed them. And it is not as if he can count on the support of all of those who backed Ramaphosa. Mabuza only won their support because they needed him for Ramaphosa to win, not because they wanted Mabuza to be deputy president.

This surely means that, today, very few people in what used to be the two main factions of the ANC actually want Mabuza to be president.

It is also important to examine how difficult it can be to make the jump from provincial ANC politics to the national stage. Over the past 20 years, the people who have led the ANC nationally have tended to have national followings, rather than coming only from a province. Zweli Mkhize is a good example of someone who has tried to jump from a provincial leader to a national position and stay there, and then failed. He was the leader in KZN, then became Treasurer-General, and ended up outside of the Top Six.

(Of course, it is true that Mkhize is now a Cabinet minister, but that is probably not what he was aiming for.)

The same thing happened to Mathews Phosa. Ace Magashule is another example of a person who on this aspect is in the same position as Mabuza. He has gone from Free State ANC leader to national secretary-general of his party. So far, he doesn’t appear to be enjoying himself.

While Mabuza was incredibly safe and secure in Mpumalanga, that was all he had. To leave this power base, the warm embrace of a place he has led for a long time, could turn out to have been a mistake.

One of the biggest problems Mabuza will have is his poor image across the country. While no polling data on his image has been published, it seems likely that his image on a billboard would not garner many votes for the ANC. His current national position means that he is going to be a huge focus both for investigative journalists and for any (and all) enemies he made in Mpumalanga. Their relative bargaining position will have increased too.

All of that said, there will be those who think that Mabuza is in a prime position to start changing all of this, and to essentially start campaigning for the top job now. But even here, there are certain significant limitations. As deputy president, unlike say a Cabinet minister running a department, the scope for patronage is quite limited. He won’t have a ministry to run, or policy to devise. And his duties and powers will be only those assigned to him by Ramaphosa, who surely has no interest in helping him strengthen his power base.

Of course, there are still ways for Mabuza to get around all of this. He could try to claim there is simply no one else who could actually take over from Ramaphosa, because of the political divisions in the party. He may also, with time and energy, be able to create a bigger national support base. And, with luck, he could also try to rehabilitate his image.

This may be easier than it sounds. Mabuza could ask to lead a national anti-corruption campaign, and actually ensure that ANC people engaging in corruption end up being held accountable. If he were to claim several important and senior scalps, he would be seen as the one person prepared to act, and his previous sins could be forgotten, if not necessarily forgiven. And of course, South African politics being as fluid as it is, many other things could happen that help him along the way.

People who know Mabuza well claim that he is an incredibly adroit and intelligent politician. That is surely true. But he still faces significant obstacles in his path to the top job – not least of which is that those who dominate public discussion about politics are well aware of the claims against him.

And the spectre of the Zuma memory means that people are unlikely to back someone with corruption claims again, because they know how that will end. Mabuza is in a fascinating and difficult position at present. But how it will end is by no means certain. Or simple. DM