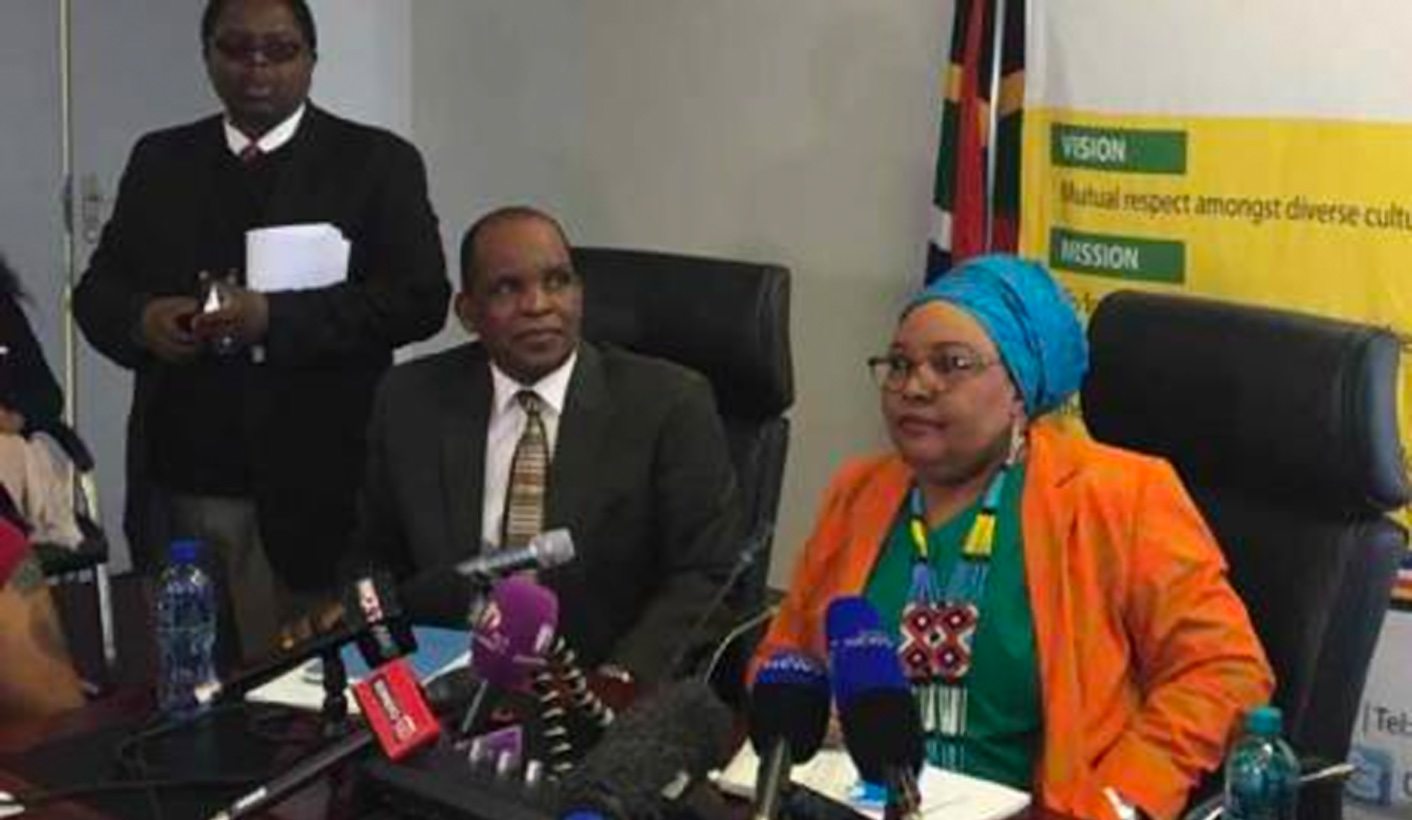 The Commission for the Promotion and Protection of the Rights of Cultural, Religious and Linguistic Communities is approaching the Constitutional Court for a declaratory order on its constitutional mandate. The commission is unhappy at being regarded as a toothless watchdog following what it considers a snub of its recommendations on the Mancoba Sevens Angels Church in Ngcobo in the Eastern Cape by Parliament. By BHEKI SIMELANE.

Commissioner Thoko Mkhwanazi-Xaluva from the Commission for the Promotion and Protection of the Rights of Cultural, Religious, and Linguistic Communities said the commission was not taking Parliament to court, but wanted assistance from the Constitutional Court.

“We have made recommendations that these religious denominations should be regulated. That’s at the core of what we are saying. We are not after the church, and we are not taking Parliament to court, we want the Constitutional Court to help assert our constitutional mandate,” Mkhwanazi-Xaluva said.

In a 2017 report to a parliamentary workshop of the Portfolio Committee on Co-operative Governance and traditional Affairs, the CRL Rights Commission recommended that every religious practitioner must be registered and operate under an umbrella body.

But the parliamentary committee cast doubt on the constitutionality of the recommendations, she said.

“We will go to the Constitutional Court for a declaratory order that says your recommendations are in violation of certain laws governing Chapter Nine Institutions. We also want to ask the court what the powers of the CRL are. That if it has no powers, then it’s a waste of taxpayers’ money. We need clarity on what it is that we can do,” Mkhwanazi-Xaluva said.

That the commission, which is a Chapter Nine institution, is not happy about being regarded as a toothless watchdog transpired on Thursday during a press briefing where it sought to clarify what steps it followed in compliance with the laws governing Chapter Nine Institutions during its investigation of the Mancoba Seven Angels Church in Ngcobo in the Eastern Cape.

Mkhwanazi said in all her experience as the commission’s chairperson, the organisation had never felt so powerless.

“We feel disempowered. We feel we can’t implement our constitutional mandate. We are at a crossroads. We are powerless and marginalised, we feel this is the end,” She said.

Seven people, some believed to be the Seven Angels church’s leaders, were shot dead by police last week in retaliation for an attack on the Ngcobo police station, which also left five police officers and a civilian, believed to be a soldier, dead. In the aftermath of the bloodbath involving the church, the CRL Commission revealed that it had investigated the church last year and that recommendations were made to Parliament, including a recommendation for the regulation of religious organisations.

Mkhwanazi-Xaluva said that when the commission approached the portfolio committee, Parliament responded that there were many rules governing religious denominations, but none to deal with members of the Mancoba Seven Angels Church.

Mkhwanazi-Xaluva said Parliament had made it clear that it did not agree with their recommendations following the findings of an investigation into the operations of that church. Mkhwanazi-Xaluva, however, warned that the commission was “a walking volume of the realities out there”. She said it pained them that Parliament nullified every recommendation they made.

She said: “We sent our report to Parliament on 27 June 2017. we ran a workshop with Parliament. Part of what we red-flagged was that we knew something horrible would happen at the church if nothing was done to facilitate legislation. We had no powers to deal with it. We relied on other religious leaders,” Mkhwanazi-Xaluva said.

Mkhwanazi-Xaluva said this was why they were shocked by remarks that there was not enough representation of religious organisations.

The squabble over the recommendations relating to the church’s operations had provoked a spat between Parliament spokesperson Moloto Mothapo and Mkhwanazi-Xaluva. Responding to Mothapo’s comments that the commission did not understand its constitutional mandate, Mkhwanazi-Xaluva said Mothapo’s utterances were unfortunate.

“We did what we had to do. We are saying if they had not gone for the second hearings, I mean, there were hearings, and there were hearings about us, and about our report. We thought what Parliament would do was move with speed and enable implementation of our recommendations,” said Mkhwanazi-Xaluva.

During their investigations into the operations of the church, the commission had discovered that the church was a law unto itself.

“Members said they were angels from heaven, they were sent here by God. They said they were all God’s brothers, all seven of them chose who their parents are. Some congregants who had careers gave these up and joined the church. They willingly told us this,” said Mkhwanazi-Xaluva.

Mkhwanazi-Xaluva said they had instructed their lawyers, who were currently drafting papers. She said they expected the process to take about two weeks but that this would be determined by the court.

“The organisation had taken the commission to court, based on a remark by myself that if you don’t do nothing, people are going to die,” said Mkhwanazi-Xaluva.

Mkhwanazi-Xaluva said the commission was aware that there were possibly more churches like Mancoba Seven Angels Ministries. They would appreciate information about other similar religious groups.

She said the commission was monitoring suspicious activities in two villages in Limpopo.

Some of the counter-recommendations made by the Cogta portfolio committee include non-commercialisation as an infringement of constitutional rights.

At the briefing, the CLR’s Reiner Schoeman said people were personally attacking the commissioner.

“We reject the attacks because they are not part of the discourse. Our commissioner is a person of high integrity.” DM

Photo: Religious watchdog the CRL Rights Commission briefing the media on its report on the commercialisation of religion, 1 March 2017. Picture: Thando Kubheka/EWN