ISS Today: Is Gaddafi still dispensing largesse from the grave? 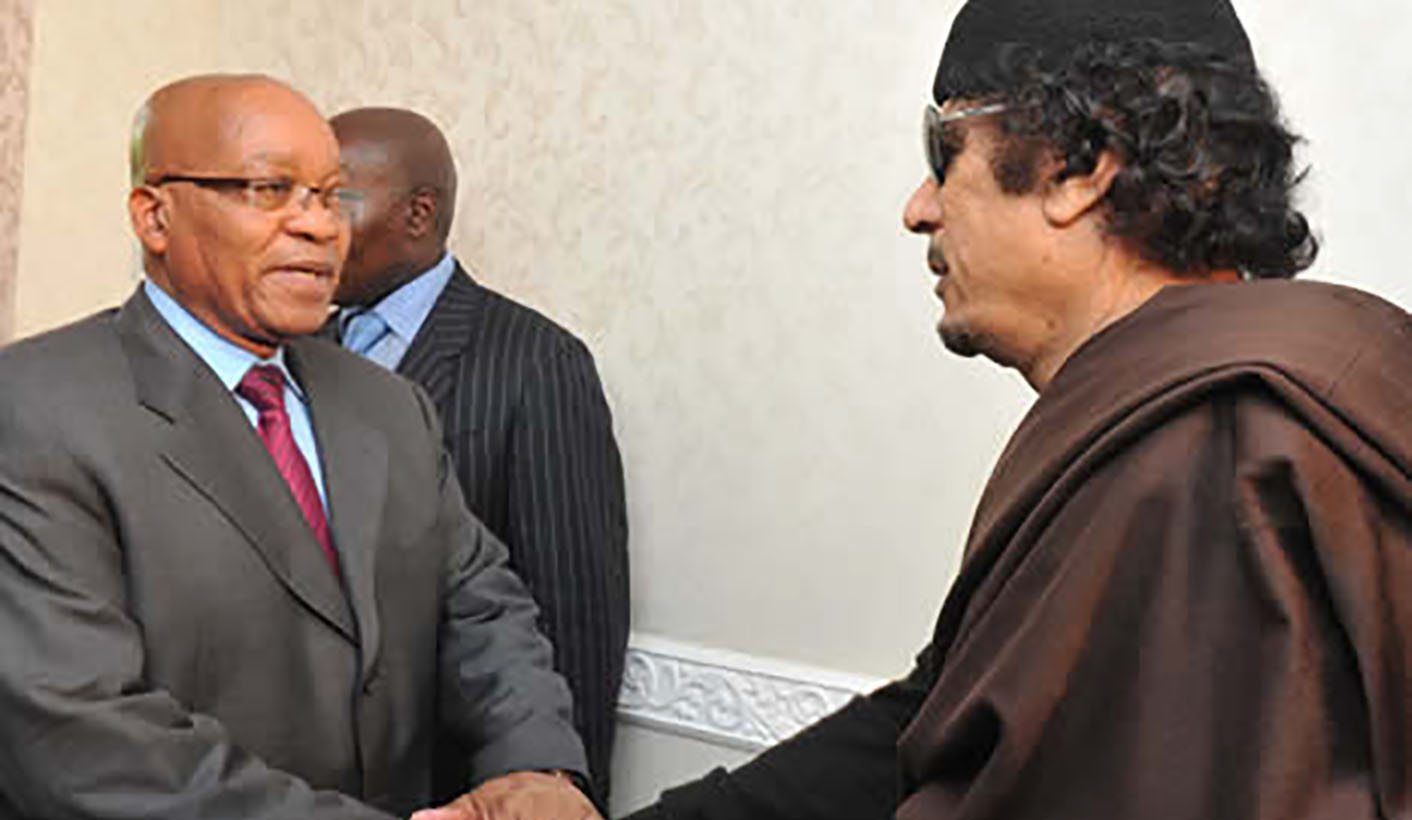 The news that Bashir Saleh Bashir, former chief of staff and reputed “banker” to the late Libyan leader Muammar Gaddafi, was shot last Friday in Johannesburg has again raised questions about what he is doing in South Africa. Bashir was attacked when he arrived home from OR Tambo International Airport, diplomatic sources say. He survived what appeared to have been a common crime.

Yet government officials haven’t confirmed the incident, apparently because Bashir is officially not in South Africa. He’s in fact been living here for over five years. Bashir fled Tripoli as Gaddafi’s government fell in 2011, going first to Niger and then to France, then coming to South Africa.

He reportedly applied for asylum in South Africa 2012. If so, did he get it? The fact that he is still here suggests so, but that can’t be confirmed because his official status is so murky. It’s also not clear why he’s never been arrested despite Interpol having issued a Red Notice in about 2012 for all countries to apprehend him on charges of fraud and embezzlement in Libya.

All this creates a strong suspicion that the South African government has been protecting Bashir for some reason. Rumours are that Gaddafi stashed loot in South Africa, among other countries, just before the rebels took Tripoli. The supposed amount hidden in South Africa has ranged from $1-billion to more than $100-billion. A 2013 media report suggested that about $1-billion in cash, gold and gems was stored in a warehouse at the OR Tambo International Airport.

So Bashir apparently had extensive control over or at least knowledge of legitimate Libyan investments. The Libya Africa Investment Portfolio’s legitimate assets in South Africa, including interests in luxury hotels, were frozen in 2011 by the Libyan embassy, in line with UN sanctions. But would Bashir also have had access to any illegitimately expatriated Libyan state assets? That question hasn’t been satisfactorily answered.

That could be why he appears to live a charmed existence in South Africa – or at least as far as officialdom, if not the criminal underworld, is concerned. He has been seen hobnobbing with the country’s leaders at various high-profile events.

In June 2013 Zuma was asked in Parliament why South Africa hadn’t arrested him on the Interpol Red Notice. He said the government had been unable to monitor or prevent Bashir’s movement. Yet police minister at the time Nathi Mthethwa contradicted him by telling Parliament he had known as early as February 2013 about Bashir’s presence. At that time there were reports of competing Libyan factions each trying to get the South African government to hand over Gaddafi’s supposed stashed loot.

In June that year Pravin Gordhan, then finance minister, met a senior Libyan delegation in Pretoria and agreed to help repatriate Libyan funds. But there was no subsequent indication from the government of whether any hidden cash or assets had been found and returned to Libya.

The United Nations Panel of Experts, set up to enforce the sanctions imposed on Libya by the UN Security Council in 2011, has made several attempts to find the legendary Gaddafi loot in South Africa. It visited the country in 2014, armed with considerable evidence from “authorised brokers” about the treasure trove alleged to be at the airport. Its 2015 annual report, however, said it couldn’t find the stolen assets and concluded the brokers were conmen and the documents forged.

Two years later the UN panel reported that it had new information about an attempt in 2013 to use the alleged hidden Libyan assets in South Africa to pay for a multibillion-dollar arms deal. The South African state arms company Denel would supply the “Libyan Air Force” and “Air Territory Defence Forces” with a huge quantity of weapons, including over 150 helicopters, 180 Casspir mine-protected vehicles, 450 Rooikat armoured fighting vehicles and much more.

Among the UN panel’s evidence was a letter purportedly signed by South Africa’s defence minister Nosiviwe Mapisa-Nqakula supporting the deal. The scale of the deal suggested that “a large amount of money was indeed readily available and the negotiations appeared to be relatively advanced”, the panel’s 2017 report said. It added that two people directly involved in the attempted deal had claimed the arms were to be paid for by hidden Gaddafi assets in South Africa.

Significantly, the panel said it had received no replies from Pretoria to confirm the arms deal and other documentation allegedly confirming the presence of Libyan assets in South Africa. It said it had spoken to numerous Libyan politicians and civil servants ‘who confirm that several “official” delegations have travelled to South Africa to meet with the ANC leadership and discuss the issue of the return of Libyan assets’. For some reason the big arms deal apparently never went through.

The panel also probed the apparent transfer of $800-million by Bashir on behalf of Libya Africa Investment Portfolio from a Standard Bank branch in South Africa to a Stanbic bank account in Kenya in 2011. The panel said this transaction indicated that “concealed Libyan funds were made available to members of the former regime who are in South Africa”. Bashir dismissed the transaction as a “mirage”.

All these allegations and the government’s inadequate responses to questions about Bashir – right up to the failure by police to confirm last week’s attack – only fuel the suspicion that there is something fishy about Bashir’s presence in South Africa.

If Gaddafi was indeed funding the ANC in life, is he still funding it beyond the grave? This is one of the questions. Not least because the ANC’s relationship with Gaddafi was murky anyway.

During the six months between the uprising against Gaddafi in February 2011 and his fall in August, Zuma – while leading the African Union’s peace mediation efforts in Libya – was engaged in secret back-channel peace negotiations with Mahmoud Jibril, interim prime minister of the National Transitional Council representing the rebels fighting Gaddafi. Jibril ended the talks with Zuma in disgust as he said Zuma was trying to keep Gaddafi in office.

Now that South Africa has a new president and, as of this week, a new foreign minister, Lindiwe Sisulu, the government should come clean about Bashir and why he is still in this country and still at large. It should also shed light on South Africa’s historical relationship with Gaddafi. DM