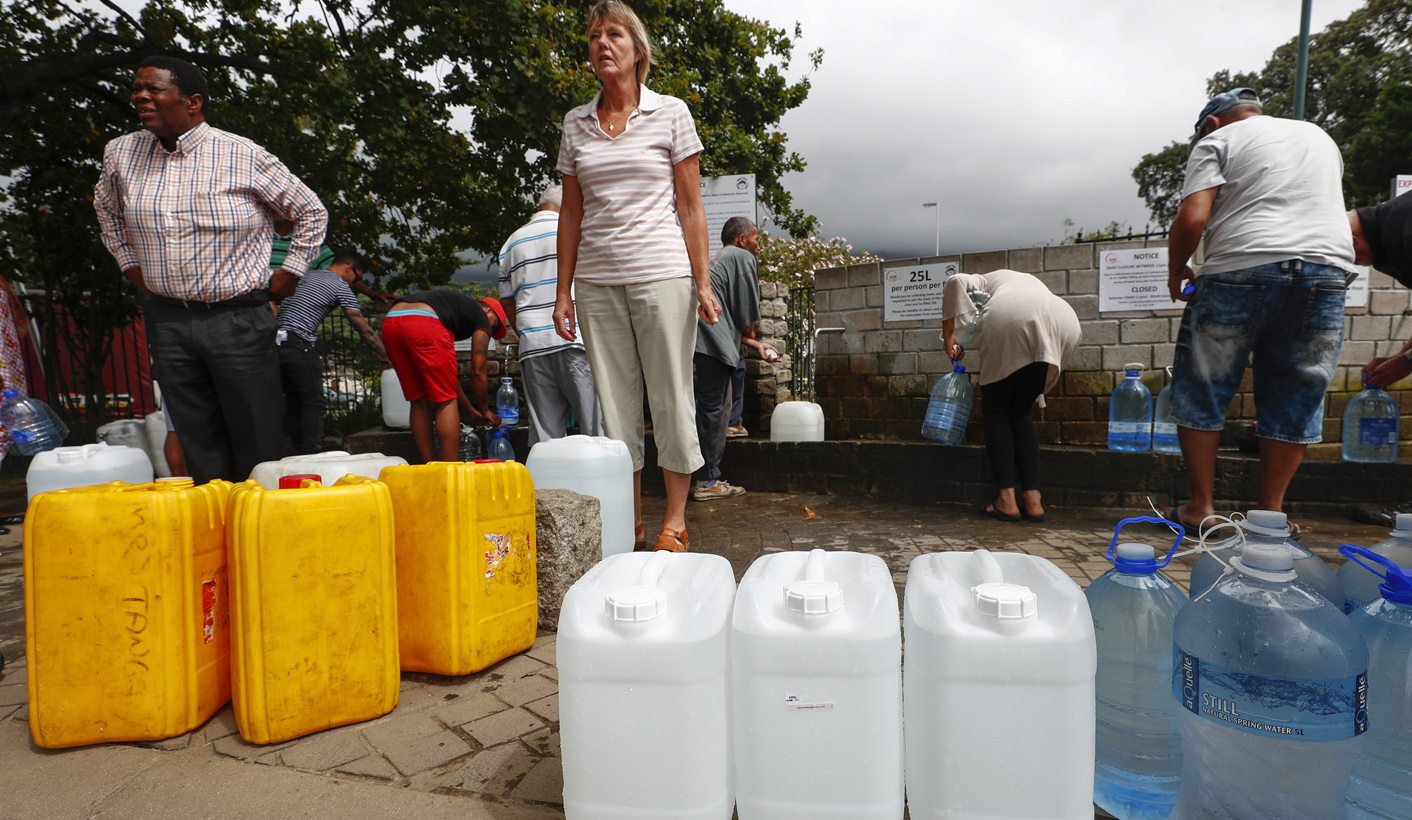 Cape Town’s officials dealing with water are starting to look marginally less haunted. At two media briefings this week, it was clear that the emphasis in messaging is being taken off Day Zero as it retreats as a possibility. But if rainfall levels are low again this year, and in years to come, a condition of urban water scarcity will become the new status quo – and it will require the currently chaotic national Department of Water’s intervention to fix. By REBECCA DAVIS.

At the City of Cape Town, the officials tasked with handling the city’s water crisis are seeming ever so slightly more relaxed these days – even managing the odd joke. It’s a far cry from where the City was a month ago, when Mayor Patricia de Lille announced the punitive Level 6b water restrictions with the warning that Day Zero was now virtually guaranteed.

At a press conference on Thursday, deputy mayor Ian Neilson took care to thank Capetonians for their efforts in reducing water consumption: back to less stick, more carrot.

But it is also undeniable that what has improved the city’s water outlook is the fact that Western Cape farmers came to the end of their annual water allocation at the end of February. Agricultural irrigation was responsible for almost half the demand on the province’s water system.

This being the case, why didn’t officials make it known sooner that they were aware that this pressure on the water system was about to end?

Because, the City’s Gisela Kaiser informed journalists at a media round table on Monday, “we didn’t have confidence that agriculture would be cut off”. Kaiser explained that the City has no direct influence over agricultural consumption, which is a function of the national Department of Water.

“If [agricultural irrigators] had continued to get a release of water on the same line as last year, the system would have been in serious trouble,” Kaiser said.

The issue of water sharing between farmers and the City has clearly been a point of tension, with Kaiser remarking that in the past, agriculture “really didn’t play ball” when it came to restraining water consumption.

But when questioned by Daily Maverick on Thursday, Neilson stopped short of saying that agriculture had been allocated too much water.

“Agriculture has had to take a massive knock; let’s not pretend otherwise,” he said, pointing out that the water quota for farmers had been reduced by 60% for the hydrological year.

“The only concern we have had is that (the City’s) allocation is secure. Agriculture took all of their allocation in the first three months, and then the national department (of water) cut them off. We don’t believe that should be extended, because the City’s allocation needs to be protected.”

As things stand, the date of Day Zero has been pushed back to 9 July. The City has no plans to postpone that date further for now – but Neilson acknowledges that the date is based on conservative projections.

“Our projections have always been based on the assumption of no rainfall,” Neilson said. But by July, Cape Town should be receiving some rain – if normal patterns hold. In 2017, they did not.

Kaiser explained on Monday that the trouble is that in light of highly erratic weather patterns, “no one’s willing to put their name to whether it’s going to be a wet winter or a dry winter”.

She said, however, that “a scenario in which it does not rain in the future, or in which it only rains at 2017 levels, is unrealistic”.

Neilson expressed a similar belief: “Obviously we do expect that there will be some rain.”

In the event that rainfall for Cape Town is minimal once again, 2019 becomes a problem even if 2018 is successfully navigated without reaching the Day Zero scenario. Kaiser said that if Cape Town receives 75% of 2017’s rainfall this year, by the end of the rainy season Western Cape dams will only be about 30% full.

With unfavourable rainfall this winter, Neilson warned that Day Zero could end up happening “very early next year”.

But talk of Day Zero is receding in the City’s communications strategy, it appears. On Thursday, Neilson sought to clarify the whole notion of Day Zero, which he seemed to believe has been poorly understood – possibly as a result of the ANC’s contention in January that the concept was a “DA invention”.

All that was intended by the idea of Day Zero, Neilson said, was that a point might arise where “water availability got to a low level that would require us to move to a very severe form of restriction, level 7, which is a case of shutting off large portions of the city’s network”.

There was a period, a few weeks ago, when public discourse on the water crisis seemed to be focusing overwhelmingly on the impending logistics of Day Zero. On Thursday, only one question from journalists related to this aspect, and Neilson’s presentation did not deal with it at all.

Now the focus is shifting to the longer term – which raises the question of what impact the parlous state of the national Department of Water is likely to have on future water security. As Daily Maverick reported, the appearance of government water officials before Parliament earlier this week further exposed the disastrous financial mismanagement of the department.

“We are very concerned about the financial situation in that department and their ability to deliver long-term plans for water supply and augmentation in the Western Cape,” Neilson said.

For the time being, Cape Town is bearing the cost of its water augmentation projects from its own budgets. But these are on a small scale, and in future far more elaborate schemes will be required.

“Major water augmentation schemes need very large sums of money beyond what the City can do,” Neilson said. Cape Town – and every other South African city – will be dependent on national government for the funding and implementation of such projects.

On one point, the City of Cape Town has seen the writing on the wall. Given the obvious change in rainfall patterns, Neilson said, South Africa cannot continue to expect all its water to come from rivers and dams, supplemented by rainfall.

“The risks of relying only on surface water have increased,” Neilson said. “The national department needs to shift its approach.” DM