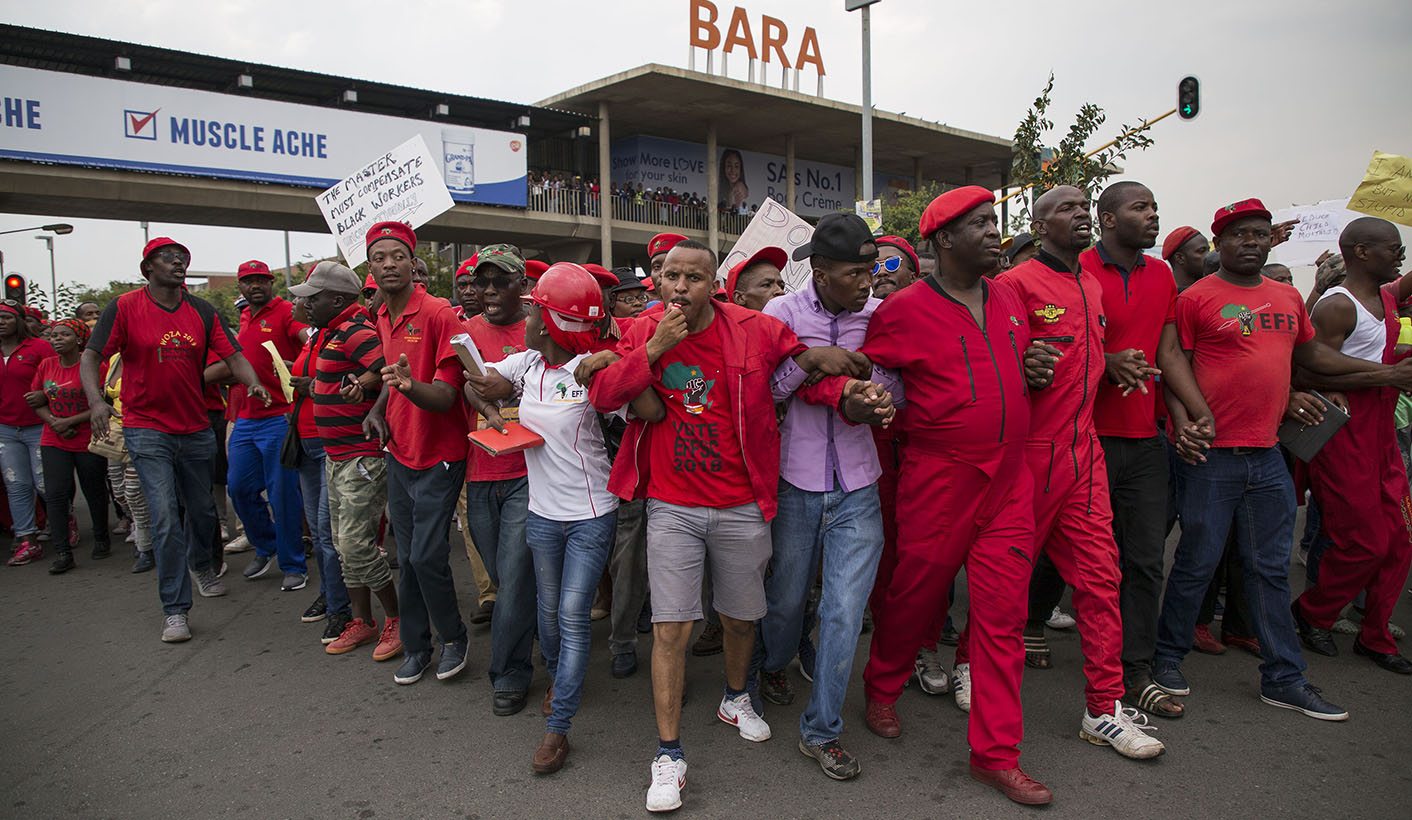 On Wednesday the Economic Freedom Fighters held protests at public health facilities across South Africa. The aim of the pickets was to highlight the poor state of public health services in the country. In Gauteng, senior party leaders, including Commander-in-Chief Julius Malema, picketed outside Chris Hani Baragwanath Academic Hospital in Soweto. By BHEKI SIMELANE.

At the beginning of 2018 the EFF announced that the party would dedicate 2018 to challenging the lack of adequate health services in the country. At the time, the party said it would embark on awareness campaigns to highlight shortcomings in the public health system. On Wednesday that campaign got under way.

Speaking to Daily Maverick on Wednesday morning and ahead of the picket, EFF General Secretary Godrich Gardee said: “We are going to be speaking about how our people are mistreated in public health institutions.”

“We want to encourage our communities to continue demanding their public health rights. We also want the government to take this matter seriously and act,” said Gardee.

The country’s public health system has often been subjected to criticism for poor service, poor hygiene, insufficient staff, rampant negligence and even racism.

“We have complaints of white doctors not wanting to touch some patients because they are black,” Gardee said, without providing details about the incidents or whether complaints had been laid.

Later during the picket, Malema made a similar remark but also did not elaborate. “Even when they are called when they are on standby to attend to patients, they don’t respond. They don’t value the lives of black people,” Malema said.

Gardee said patients regularly walked into unhygienic health facilities. He said many of the country’s public health centres had insufficient staff, poor service, and were in dilapidated buildings.

While some dismissed the EFF as a party that is desperate to remain in the spotlight after its main focus in the form of Jacob Zuma had exited the political scene, the state of the country’s public health services is a cause for serious concern.

The country’s poor health service was blatantly evident in the Life Esidimeni matter when 144 Gauteng psychiatric patients were moved from Life Esidimeni to ill-equipped and inadequately resourced NGOs despite repeated warnings that this would be detrimental. A commission of inquiry headed by Former Deputy Chief Justice Dikgang Moseneke was instituted, with the hearings recently completed.

Chris Hani Baragwanath Hospital has had its fair share of horror stories.

In a recent reply to questions in the Gauteng legislature, MEC Gwen Ramokgopa said that the provincial health department had forked out over R1-billion in settling 185 medical negligence cases from January 2015 to May 2017 with 76% of the cases being for 50 brain-damaged babies. Chris Hani Baragwanath Academic Hospital had the most cases against it, with R514-million paid to 44 claimants.

The EFF picket kicked off at the KFC outlet opposite the Orlando Towers in Soweto and proceeded to the Chris Hani Baragwanath Hospital where they handed over a memorandum of their grievances to the hospital’s acting CEO, Sifiso Maseko.

Addressing the crowd of about 500 EFF supporters, Malema noted that staff at hospitals were working under difficult conditions under stress and that as a result they could not perform to the best of their ability.

Malema said nurses were grumpy because they were overworked and underpaid.

“We shouldn’t be speaking of Bara as a bad hospital. If we fail everywhere else we can’t fail in Bara,” he said.

Malema said the bedridden patients receiving treatment at the hospital should be taken care of all the time, not just during elections.

He also urged the hospital to care for children. “If you neglect a sick child you are neglecting an engineer, a future president. It’s not about the child, it’s about the potential in that child,” said Malema.

He said the hospital was in a very poor condition to be providing medical care. Malema said they were aware that children were sleeping in boxes, and lamented that this was happening under a black government because the ANC had failed the people.

He urged supporters to take videos, and expose bad service. “Make follow-ups so that they are disciplined. Patients come here, they are already traumatised, there is no need to extend their trauma,” he said.

He urged Maseko to provide counselling to his staff because they needed someone to talk to, to improve staff morale. “Everyone entering the hospital must have the right attitude so that it rubs off on patients. An attitude that says tomorrow will be better, not one that says ‘wish I could die’.”

Malema also used the opportunity to highlight the party’s achievements, listing free higher education, a basic minimum wage and land expropriation among them.

“We realised that we were leaving health behind, so we must bring health together with land, education, and the minimum wage. Every month we will be in every hospital performing badly, to expose those shenanigans,” he said.

Malema challenged President Cyril Ramaphosa, who he described as having a lot of money, to donate his salary at the hospital. “You’ve got too much money. You don’t need that money. Come and donate it here at Bara,” he said.

Malema also challenged Ramaphosa to do his morning walks in every hospital ward to see what patients and staff were subjected too. He said there was a lot of money to look after the hospital but said money finds its way into the pockets of politicians.

The Young Nurses Indaba Trade Union’s Lerato Madumo-Gova, who is also a nurse by profession, asked: “How is it that after 24 years of democracy we are still watching our parents queue in long lines in hospitals? Health is not a priority to the ANC.

“Nurses, let’s not keep quiet, let’s lead our communities in the revolution of the health system,” Madumo-Gova said.

Malema called on all the hospital’s staff to treat patients with dignity no matter how bad their working conditions. He said Aids patients must not be marginalised because this only served to perpetuate existing stigmas.

“They must be treated like every other patient. You are being irresponsible if you discriminate (against) them,” Malema said.