Cabinet Reshuffle: The Worst of Times. The Best of Times 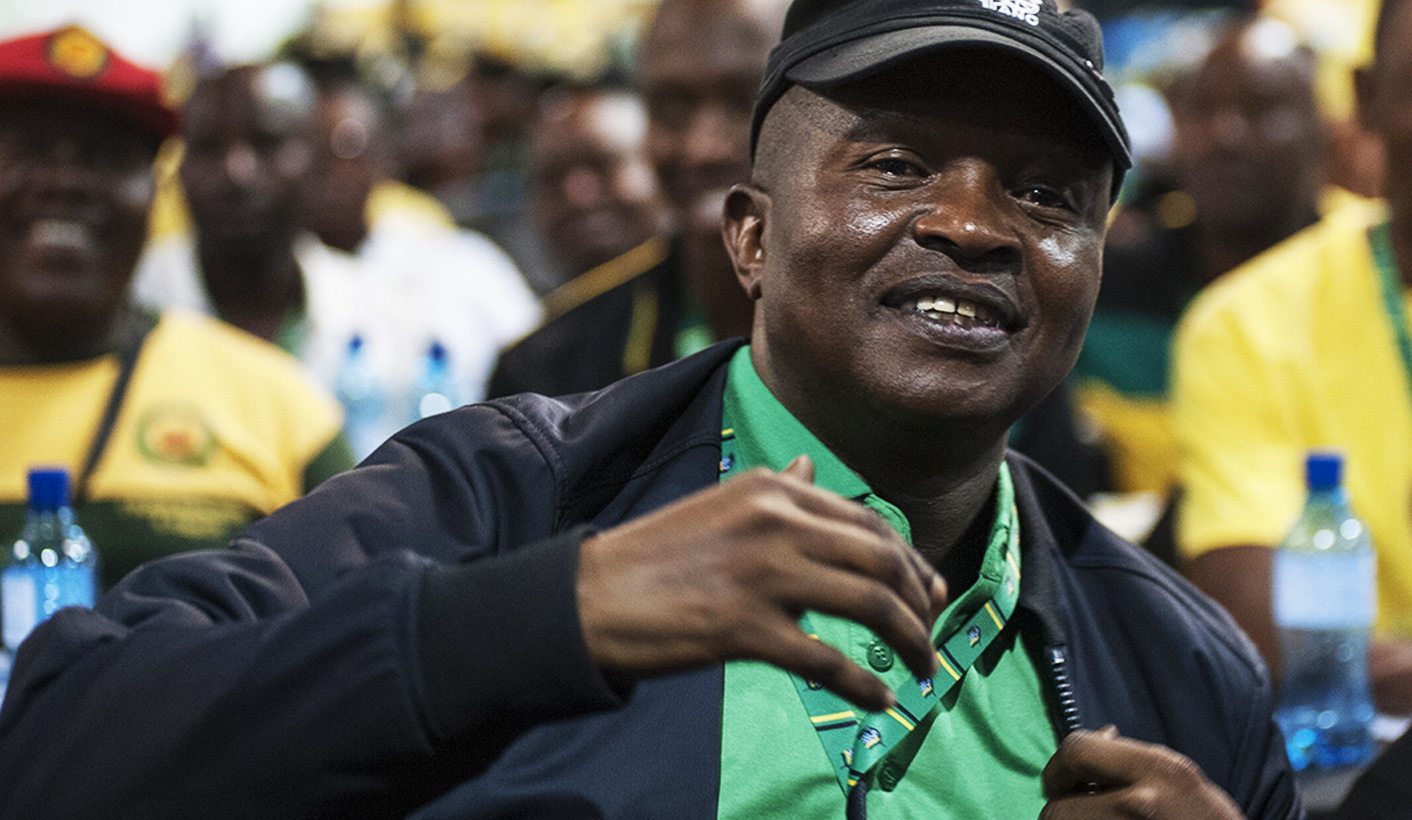 If Cabinet reshuffles represent the political balance of forces at the time at which they are conducted, Monday night’s announcement was the final proof, if more were needed, that the ANC is still locked in a series of massive struggles, and with big actors. It is now clear that President Cyril Ramaphosa needs David Mabuza if he is to survive, and that he still lacks the power to fire even Bathabile Dlamini from the Cabinet. But at the same time, it is also clear that he does have the authority to right one of the biggest wrongs of our times, the firing of Nhlanhla Nene as Finance Minister. While there are many reasons to feel these are the worst of times, there are also signs of the best of times. By STEPHEN GROOTES.

First, the panic, the worst.

David Mabuza is now going to be your Deputy President. A man accused of corruption; Of theft; Of murder. In some ways, this places us in a much worse position than we were when Jacob Zuma was Thabo Mbeki’s deputy. No one has ever accused Zuma of murder, he didn’t come to the office with a reputation of being a thug, which Mabuza most certainly possesses. Mabuza being just a heartbeat away from the Presidency is the best campaigning tool the opposition parties could wish for.

(Especially when Ramaphosa himself didn’t look his best on Monday night.)

But, the internal politics of the ANC being what they are, it is now clear that Mabuza decided he could not back Nkosazana Dlamini Zuma at Nasrec, and so Ramaphosa came through in the end. However, it should not be forgotten that under the Constitution, the Deputy President has the rights and duties assigned by the President. Apart from that, they have the same role as any other Cabinet Minister. This means that formally, he can only do what Ramaphosa allows him to do (apart from when Ramaphosa is out of the country, and Mabuza becomes, yes, acting president, with the power to invade Lesotho, should it be necessary).

In the past, there has usually been a situation where the incumbent president’s biggest rival has been his deputy; think Mbeki and Zuma, Zuma and Ramaphosa. Which is how Zuma ended up as Chair of the Moral Regeneration Movement and Ramaphosa in charge of the E-tolls task team.

This means that Ramaphosa can still place significant boundaries around Mabuza. And Mabuza appears to lack the national support he would need to prevent that from happening. A cat may be able to survive under many circumstances, but that doesn’t mean it gets to run the circus.

Mabuza may find that frustrating.

There is reason for panic too that for some reason Bathabile Dlamini cannot be fired from the Cabinet. She is now being shuffled off as Minister for Women in the Presidency. Considering most people probably can’t name the previous person in that post, it is certainly a demotion. And confirmation that the position has no real political power, it was simply used to create an opportunity for patronage.

However, the person who she has swapped with (in case you hadn’t worked it out yet) is Susan Shabangu. Shabangu has been what you could call an almost silent minister. And now she is in charge of fixing the social grants payment system mess. It is a mystery why one of the biggest problems of all is now in the lap of someone who has shown little experience of fixing this, or any, kind of problem in the past. It could well be a job for a Mondli Gungubele or even a Pravin Gordhan. It suggests, perhaps, that the story around Cash Paymaster Services is much more political, and possibly involves a wider group of people than we had previously thought.

The appointment of Nkosazana Dlamini Zuma to the position of Presidency Minister for Planning, Monitoring and Evaluation is curious. When Collins Chabane was still alive, it was a ministry that appeared to have some real power. But since then, no one really cares. It is interesting both that Ramaphosa has given the person who lost at Nasrec a Cabinet position, and that it is such a junior one. Dlamini Zuma has been Minister of Health, Home Affairs and International Relations, all offices with very real power. This is a huge come-down. It is a sign of how badly things have gone for her, and may push her to re-assess some of her life choices.

Thankfully, now that the shock of Mabuza as Deputy President may be wearing off, the sense of panic is ebbing. And is slowly being replaced by some calm.

The first reason for this is that so many of the really really evil bad incompetent awful ministers have gone. Lynne Brown, Mosebenzi Zwane, Des van Rooyen, Bongani Bongo, David Mahlobo, all politically kaput, and hopefully will be booed in the streets, if they dare venture out without their blue light brigades.

But the choice of Dipuo Letsatsi-Duba as the new Minister of State Security is curious. She is the kind of person many people, even professional politics watchers, will not have heard of. Her life story will probably burst onto the national stage over the next few days. She is from Limpopo, a former MK, and Parliament’s website says her previous position was in the Limpopo legislature. During the Zuma years we became accustomed to people unknown in the urban political arena being appointed to important jobs suddenly. Often, this was a sign that they were completely beholden to Zuma, and would do his bidding. It may be that Letsatsi-Duba is a similar case. Or that she is the result of a compromise over the real political hot potato of who controls those who can tap cellphones. And it is also entirely possible that the urban commentariat (including this writer) are just ignorant of her past, and that she is the best person for the job. It would be tempting to say that time will tell, but bluntly, this position is so important to our politics that actually one cannot just hope for the best, one must demand to know more.

Right, to a phrase you don’t read very often in this online daily: And now, for the good news!

And there is plenty of it. It is surely a fantastic feeling to see Nene back in the halls of the National Treasury. It was his unjust, unexplained, and unwarranted removal back in 2015 that started the internal ANC revolution that led to Ramaphosa becoming president. If ever a person had borne their unjust treatment with a quiet dignity, it is Nhlanhla Nene. And now, in such a symbolic moment, he is going back to the Finance Ministry. The move just makes sense, and completes the circle. When you trust the person who is in charge of the nation’s money, it is simply easier to sleep at night. Now you can.

But, as you do, spare a thought for Mcebisi Jonas. The man who turned down the R600-million bribe offered by the Guptas to become the Finance Minister. It was that decision that set the stage for the overstepping by the Guptas and Zuma to remove Nene, and attempt to replace him with Van Rooyen. Jonas was not on the list of ministers and deputy ministers announced by Ramaphosa on Monday night. If it was an oversight, he deserves better. Much better. If he was approached and has other things he wants to do in his life, this nation owes it to him to not just wish him well, but see that he achieves all that he wants to do. In so many ways, it was he, and Pravin Gordhan, and Derek Hanekom and so many others who saved the ANC, and possibly the country, from the abyss.

Talking of Hanekom, he’s back at Tourism, after playing such a key role in moving opposition to Zuma within the ANC.

Also back in Cabinet is Blade Nzimande, at Transport. When Nzimande first became Higher Education Minister, it seemed like a perfect fit, it played to his strengths and interests. But obviously that has become difficult. He may not enjoy Transport that much, but he is likely to do all that he can to perform well and competently. Even though it may not actually suit the longer-term aims of the SACP to have him still in Cabinet.

While there may be many who are relieved to see Malusi Gigaba leave the position of Finance Minister, he may well sit back in his chair at Home Affairs with a relaxed sigh. It’s not clear that he enjoyed the position of Finance Minister, the context around him was incredibly difficult, and would have challenged anyone. But the fact that he oversaw the appointment of so many Gupta-aligned people to the boards of parastatals as Public Enterprises Minister, and yet is still in Cabinet, could mean many things. Perhaps he is still too important to fire from Cabinet, or maybe he has done some deal that could evolve in a court somewhere. Either way, visa officers in airlines around the world will not rejoice upon his return.

There are two other appointments that are really reason for celebration. The first is that of Pravin Gordhan to Public Enterprises. Gordhan is one of the finest political operators of his generation, and he knows where the bodies are buried and he won’t take crap from anybody. Imagine being on the board of the parastatals just now. He was surely the prime moving force behind the new Eskom board. Envision, just for a moment, if all of the boards of the parastatals looked like Eskom’s and SAA’s. And imagine how quickly things could get moving once he establishes himself (which should take him until about lunchtime on Tuesday).

And then, the removal of that liar Mosebenzi Zwane from the position of Mineral Resources Minister, and his replacement, by, of all people, Gwede Mantashe. Frankly, there is probably nobody better placed to get our mining industry on its feet again. Mantashe knows everybody in the mining industry from his time as secretary-general of the National Union of Mineworkers. He is still beloved by that union. And, after what they’ve been through, he is likely to receive a great reception from the Chamber of Mines. He will tear up Zwane’s Mining Charter that has caused so much trouble, and sit down and negotiate a new one. He will be tough during that negotiation, but the Chamber will know that he will stick to it once it’s done. And then he will go on an international road show with the Chamber and tell the Americans why they must come and put billions of dollars into our land.

But the best part of it is that he has the political heft to make big promises, and then deliver on them. It is an inspired appointment.