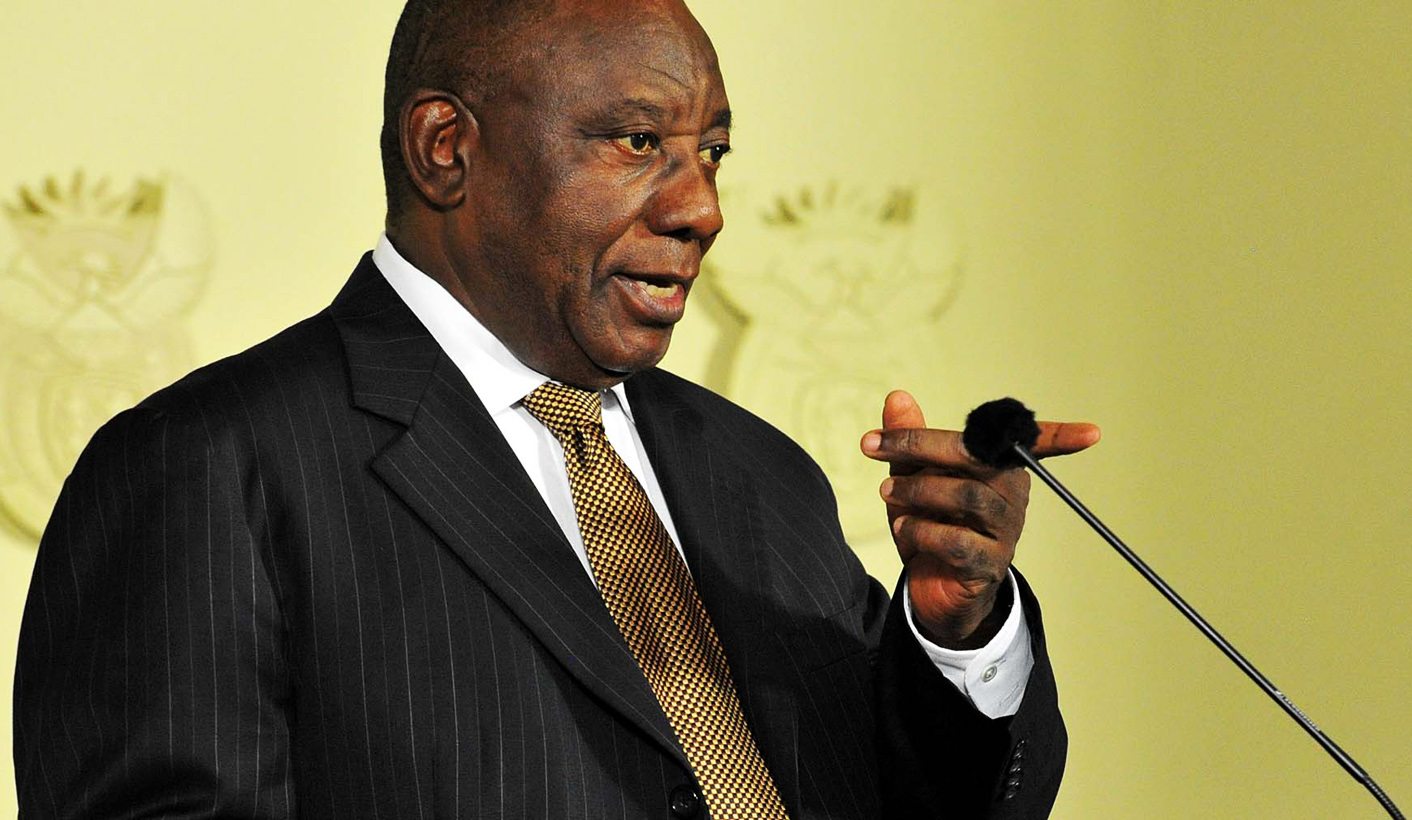 President Cyril Ramaphosa has targeted the essential portfolios in a cabinet reshuffle that was a little bit more late-night than the stickler for (prime-)time would have wanted – then again, it wasn’t up to Ramaphosa alone. By CARIEN DU PLESSIS.

Fierce lobbying by ANC deputy president DD Mabuza had paid off, and on Monday night he came a step closer to being president of the country by being appointed President Cyril Ramaphosa’s deputy. So swiftly did it happen, and so last-minute, that he only resigned as Mpumalanga premier a few hours before the announcement was made. Mabuza, together with other newly-announced ministers not in parliament, is set to be sworn in as MPs on Tuesday. Only then can they be confirmed in cabinet.

The only reasons Ramaphosa provided for the reshuffle, in a press briefing where he took no questions, was that he had to be “conscious of the need to balance continuity and stability with the need for renewal, economic recovery and accelerated transformation”.

Earlier speculation that Lindiwe Sisulu or Naledi Pandor would get the deputy president’s job had come to naught, as the dominant view in the ANC seems to have been that the party’s deputy should also be the country’s deputy. Gender considerations for the presidency again lost out to “principle”, and Sisulu will now be minister of international relations (departmental officials seem to be happy about this) and Pandor will go to higher education, as has been rumoured previously, replacing Hlengiwe Mkhize, who was dropped from cabinet.

Ramaphosa stepped up to the podium in the Union Buildings press room an hour and a half later than he initially announced he would, and looked serious and grave even though he managed to crack a little joke about the “usual suspects” (referring to journalists).

It’s a joke recycled from the day before, at the ANC’s national executive committee meeting in Irene. The “usual suspects” must have rolled their eyes.

Despite sources attributing the late start to the fact that Ramaphosa had to do some last-minute consultations with the ANC’s allies, labour federation Cosatu and the SA Communist Party (Jacob Zuma also did this in the earlier years before he ditched them all in favour of the Guptas). The axing of those ministers most badly tainted by their association with the Guptas show that he’s pretty much in charge. He also brought back ministers who were previously outspoken on principle about former president Jacob Zuma’s alleged corruption to the point of overstepping the party line.

Ministers returned include Nhlanhla Nene (back to finance, where he was doing a steady job before his removal at the end of 2015 marked South Africa’s descent into state capture nightmare, replacing Malusi Gigaba), Derek Hanekom (back to tourism after his axing last year, replacing Toko Xasa, who is going to sport), Pravin Gordhan (in his dream job now of cleaning up public enterprises, replacing Lynne Brown) and Blade Nzimande (not back to higher education, but overseeing transport now, replacing Joe Maswanganyi).

Thulas Nxesi was moved back from sport to public works, where he did a reasonable job before, (he was there in the middle of the Nkandla scandal) replacing Nathi Nhleko, who is out of cabinet.

Others axed included David Mahlobo (energy, replaced by Jeff Radebe), Faith Muthambi (public service and administration, replaced by Ayanda Dlodlo, who was previously in the portfolio), Lynne Brown (public enterprises), Mosebenzi Zwane (mineral resources, replaced by ANC chairperson Gwede Mantashe, who is one of the two non-MP cabinet appointees) and Des van Rooyen (cooperative governance and traditional affairs, replaced by Zweli Mkhize, who will also have to play an important role in liaising with traditional leaders).

Ramaphosa, however, is not all-powerful and had to make some concessions by retaining some key Zuma loyalists in the cabinet. He largely managed to neutralise the most incompetent. Bathabile Dlamini at last got reshuffled from social development (this well-resourced department is a great war chest for ANC elections campaigns as well as for lining private pockets with grants distribution money) to the ministry of women in the presidency, effectively swopping positions with Susan Shabangu, who will be going to social development.

Other than the fact that there was an argument at its inception in 2009 that the ANC Women’s League president should be heading this ministry (Dlamini’s appointment is therefore some kind of concession to party unity), the department’s budget (R230.2 million for this financial year) is an order of magnitude smaller than social development (R172 billion). Leaving aside any lofty sentiments about women’s rights, which she has not been a consistent champion of, Dlamini would frankly have much less room to mess up here.

Same for Nomvula Mokonyane, who was moved from the water and sanitation portfolio (R15.6 billion) to communications (R1.5 billion), replacing Nkhensani Kubayi-Ngubane, who will now be heading science and technology.

Another appointment to demonstrate unity in the ANC is that of his fellow contender for the ANC presidency, Nkosazana Dlamini Zuma, as minister in the presidency of planning, monitoring and evaluation. This position could be a ceremonial one (it’s hard to say what Jeff Radebe really did in this position), or potentially a very powerful position – when Trevor Manual occupied the planning ministry, some joked that he was as good as a prime minister. Dlamini Zuma has enough experience to make it such, having served 18 years in cabinet before and then four years as African Union Commission chair.

Another compromise appointment was to move Maite Nkoana-Mashabane from international relations to land reform, as opposed to axing her completely. Replacing her with Sisulu is an indication that Ramaphosa is set to take international relations a little more seriously than his predecessor (Nkoana-Mashabane was at best weak, but most often embarrassingly incoherent in this portfolio), but it’s hard to say what this means for land reform. Perhaps land reform will merge again with agriculture when Ramaphosa’s overview of government departments is done, and provide him with an opportunity to part with her gently.

Gugile Nkwinti, who didn’t achieve much in land reform anyway, will now be in the water and sanitation portfolio.

Sfiso Buthelezi was moved from deputising finance to agriculture, forestry and fisheries.

Mondli Gungubele, who spoke out against Zuma last year, was appointed in Buthelezi’s place in the finance ministry, while former Limpopo premier Cassel Mathale, who also fell out with Zuma, was appointed deputy minister of small business development.

Malusi Gigaba, who has survived politically since the Thabo Mbeki years, was moved back to home affairs, a portfolio in which he has worked as both deputy and minister, but where he has arguably damaged tourism by introducing stringent regulations for people travelling with children.

Another Ramaphosa loyalist, Bheki Cele, was appointed police minister (although some liked his firm grip as police commissioner, he left the position under a cloud a few years ago), replacing Fikile Mbalula, who went for broke by pre-empting his axing on twitter and who will now be doing ANC elections campaigning full time. Only the free-ranging fokol-fearing criminals might be sad to see him go.

Ramaphosa further shook up the security cluster by replacing state security minister Bongani Bongo, who was appointed only a few months ago by Zuma, with Dipuo Letsatsi-Duba, who seems to have as little experience of the portfolio as Bongo. Her appointment left the spook world baffled, but some officials close to Ramaphosa said he trusted the former Limpopo MEC, who was brought into national politics as deputy minister of public service and administration by Zuma.

With all the razzmatazz, there were jokes doing the rounds on Monday night that Ramaphosa had forgotten to reshuffle deputy police minister Bongani Mkongi, who controversially said on Facebook in 2016 that the Cape Town building on which a giant “Zuma must fall” billboard was erected should be burnt down and its inhabitants be “burnt to death”.

Ramaphosa, however, left the backdoor open for another reshuffle before next year’s general elections by leaving two deputy ministries vacant and by announcing that the review of the “configuration, size and number of national ministries and departments” would be done in due course.

If all else fails, there is another opportunity to reshuffle after next year’s elections. For now, it’s a delicate balancing act between keeping the general voting public happy and keeping the party together to enable Ramaphosa to get a convincing mandate at those polls. DM