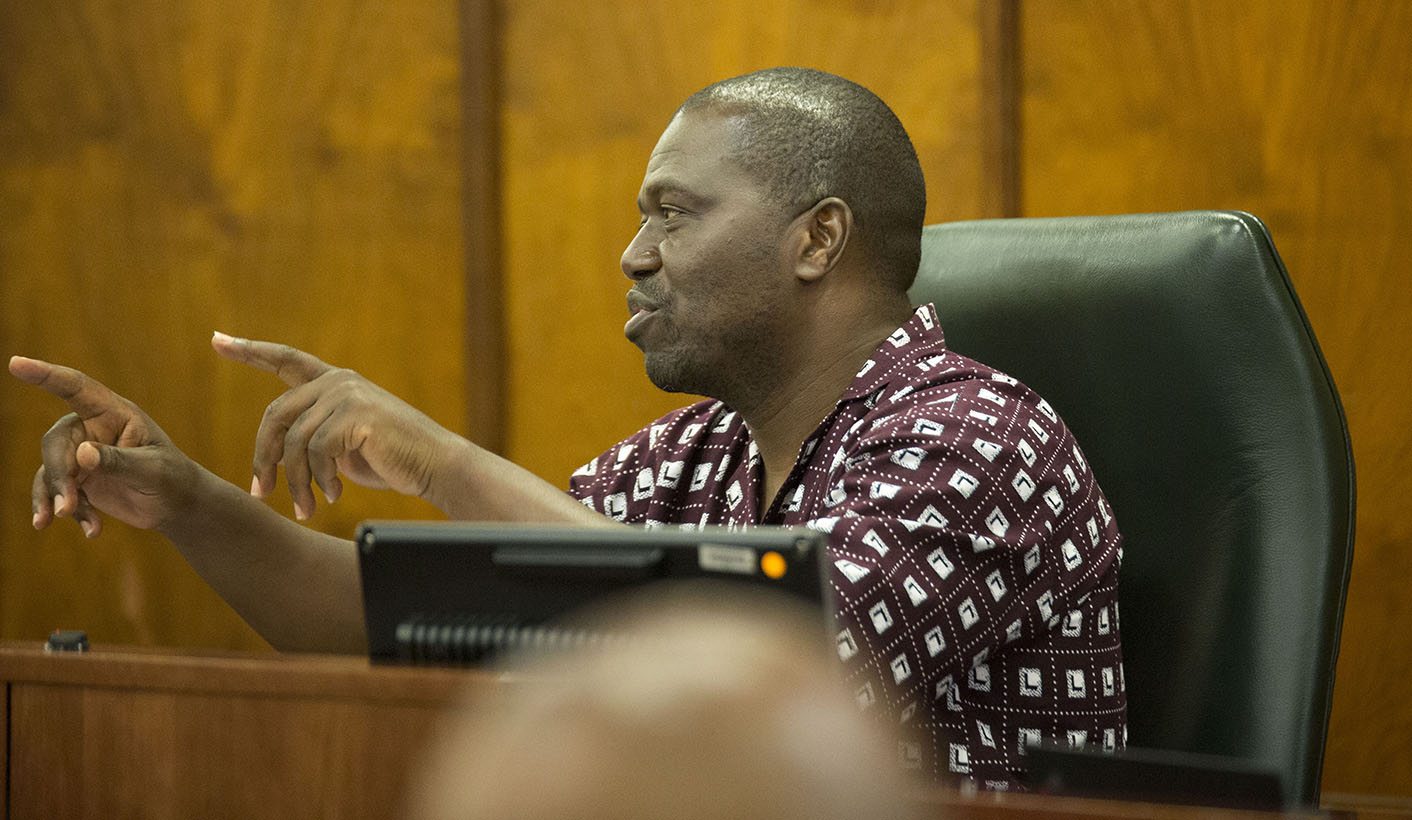 Three South African provinces are currently experiencing extreme drought, and most major metropolitan areas are facing water restrictions. Water may not be as sexy as land, but it is going to become one of the hot-button issues of the next few years countrywide. As Parliament heard on Tuesday, however, the national Department of Water and Sanitation is in frightening disarray its condition compared by MPs to the worst-run State-owned Enterprises. New Minister Gugile Nkwinti is inheriting a mess which the country cannot afford to let slide further. By REBECCA DAVIS and SUNÉ PAYNE.

“The truth is, we don’t have a department.”

That’s how Parliament’s Standing Committee on Public Accounts (Scopa) chair Themba Godi summed up the state of the Department of Water & Sanitation following a disastrous appearance by water officials on Tuesday.

It was the third time that the department had been called before Scopa to account for its financial mismanagement, and on this occasion the committee had had enough. Scopa, Godi announced subsequently, will be opening a criminal case against the department.

The criminal proceedings relate to a R2.9-billion overdraft which the department may have illegally obtained from the Reserve Bank, but this is only the tip of the iceberg when it comes to the department’s financial quagmire.

Officials came to Parliament with a 77-page double-sided document detailing irregular, fruitless and wasteful expenditure over the 2016/2017 period alone.

The Special Investigating Unit (SIU) is already investigating tender irregularities involving Limpopo’s Giyani Emergency Project, which has seen a budget of R502-million explode to over R3-billion due to dodgy contracts.

The R26-billion Lesotho Highlands Water Project, meanwhile, is the subject of a separate investigation by the SIU and the public protector, following reports that former Water Minister Nomvula Mokonyane had delayed the project to benefit a particular contractor.

Scopa members wanted answers on “a whole range of matters related to irregular expenditure”, Godi told Tuesday’s meeting – and failed to receive them.

So inadequate were the responses from officials – including acting director-general Sifiso Mkhize and deputy director-general for infrastructure Zandile Mathe – that at one stage the meeting broke down altogether, with officials whispering to each other.

“It can’t be that [officials] choose to sulk and then MPs must sit in a corner,” complained ANC MP Vincent Smith.

In the face of officials’ claims not to have any detail on hand regarding the budget escalation of the Giyani project, IFP MP Mkhuleko Hlengwa even offered to connect their laptops to wi-fi to enable them to locate the necessary documents.

The department was summarised by MPs as being “on its knees”, with its condition comparable to the crisis at some state-owned enterprises. The ability of the department to continue to function without being placed under administration was also called into question.

Godi described the department’s previous appearances before Parliament as consisting of “shameful lies”, and pointed out that the effects of the financial mismanagement would be felt countrywide.

“The reality is the people on the ground will be hit hard,” he said. “Access to water should be escalated to national risk.”

Casting a long shadow over proceedings even in her absence was outgoing minister Nomvula Mokonyane.

In reference to the fact that Mokonyane had on Monday night received a new Cabinet deployment to the Department of Communications, Godi said: “What came out of here today is a slap in the face of last night.”

In a subsequent statement, Scopa said: “In reality, Minister Nomvula Mokonyane has left a department that has completely collapsed. It is worrying that she is now a Minister of Communications at a time when the South African Broadcasting Corporation is recovering.”

During her tenure, Mokonyane refused to take responsibility for the crisis at the water ministry. She has blamed, variously: municipalities’ inability to implement water projects and pay for them; overly bureaucratic legislation regarding emergency funding; under-performing directors-general, and political problems from Lesotho’s side regarding the Lesotho Highlands Water Project.

Parliament has repeatedly expressed scepticism at these excuses, and also suggested that a revolving door policy operated at the department which led to the exile of those who fell out of Mokonyane’s favour.

On Tuesday, Scopa members did not hide the fact that they have little faith in remaining officials. Godi suggested that it was imperative that new minister Gugile Nkwinti meet with the committee first thing, before Nkwinti could be “misled” by department officials.

Tuesday’s meeting made it clear, however, that what the department urgently requires is an exceptionally high-performing, energetic minister to turn it around: the likes of a Pravin Gordhan, in fact, if Gordhan were not needed elsewhere (or everywhere).

Is Gugile Nkwinti the man for the job? On the basis of current evidence, some cynicism is allowed.

Nkwinti’s lengthy ministerial tenure at Land Reform produced remarkably little of substance, beyond exacerbating political tensions around the issue to the point where the ANC’s newly adopted policy of land expropriation without compensation seemed a foregone conclusion. Nkwinti here must be extended some leeway, given that he was presumably hamstrung by orders from above on such a politically sensitive matter.

But it would be hoped that the minister responsible for cleaning house in a dirty department would be squeaky clean, and Nkwinti may not be that. In 2017, it was reported that he had allegedly pocketed R2-million as part of a government land deal benefiting his business partner. Nkwinti acknowledged introducing the businessman to government officials, but denied anything untoward beyond this. Nonetheless, it’s an unhelpful association for a man entering a department seemingly rife with suspicious contracts.

Beyond this, 69-year-old Nkwinti has the air of a man who is – to put it flatly – tired. Righting the ship at the Department of Water will require tremendous reserves of energy, drive, a pugnacious attitude and an openness to fresh ideas.

The water scarcity South Africa is experiencing is being shared globally to differing degrees, and the new minister will need to demonstrate an appetite for international ideas and solutions to a problem which has the ability to threaten every aspect of South African life.

Nkwinti is not known as a Cabinet superstar – and yet the condition of the Department of Water demands one. His appointment to the water portfolio, in fact, suggests that the extent of the crisis is not yet fully grasped. If Nkwinti does not act fast, the effects will become ever more difficult to ignore. DM

Photo: ‘The truth is, we don’t have a (Water and Sanitation) department,’ said chairperson Themba Godi before the Standing Committee on Public Accounts (Scopa) on Tuesday, 27 February, 2018. Photo: Leila Dougan