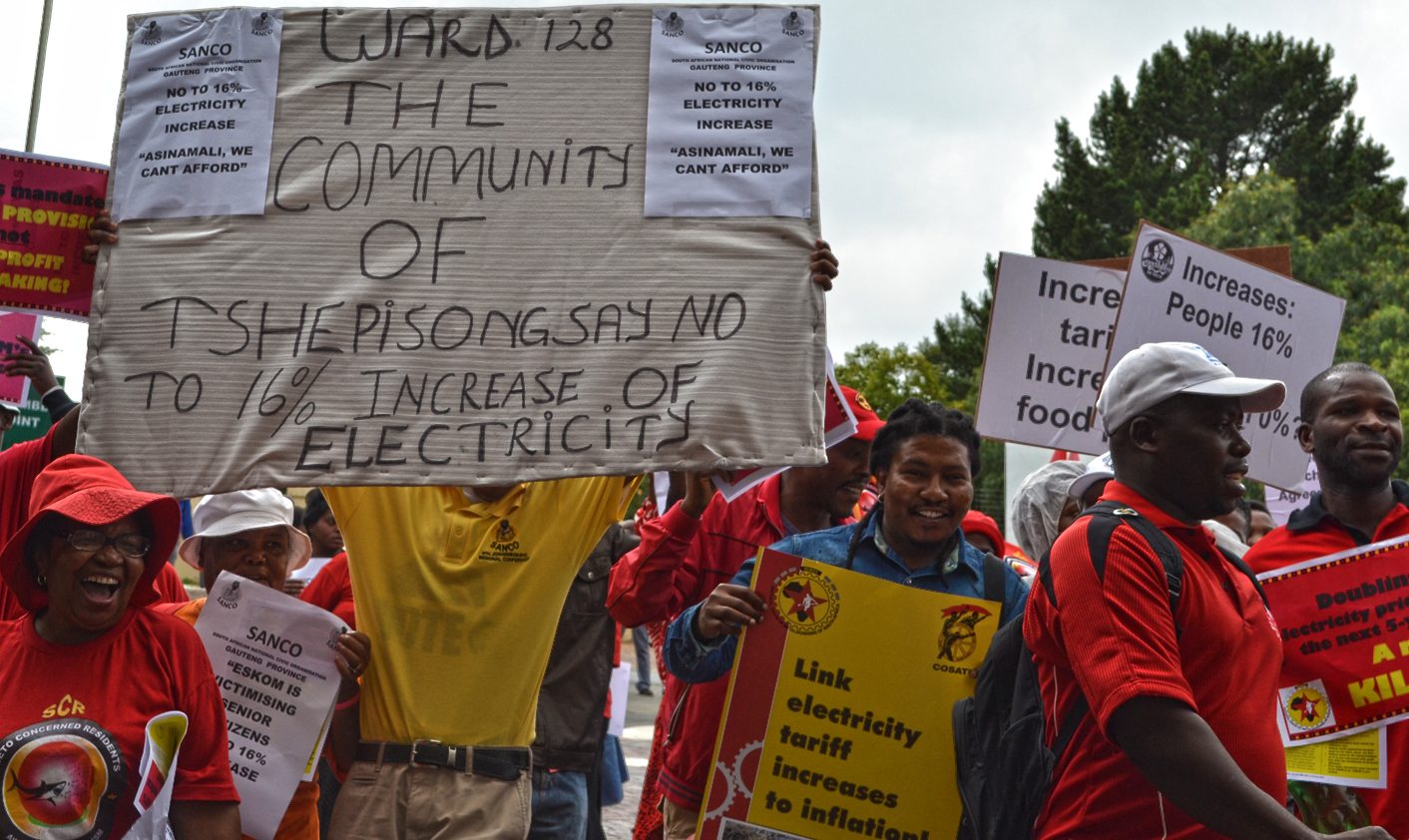 Eskom’s current debt is R350-billion, and it needs to raise a further R150-billion over the next three to four years. This is almost certainly impossible, even with a government guarantee. It would appear that Eskom cannot stay afloat without a gargantuan bailout by the South African government. By TOBIAS BISCHOF-NIEMZ and JOHAN VAN DEN BERG.

Nersa’s low electricity price increase announced in December 2017 has passed most of the responsibility for funding Eskom from the electricity customer to the taxpayer and the fiscus. It’s been widely reported that Eskom would have already run out of cash without an emergency bridging loan by the PIC of R5-billion in early February 2018 and a further R15-billion by the end of the month.

But there is a simple way to stabilise electricity prices, cast off Eskom’s crippling debt and boost South Africa’s credit rating, while maintaining public sector control of critical assets in the electricity sector.

The Eskom generation fleet consists of 15 coal-fired power stations. They all have a limited lifetime, and were built to serve the country and economy before being retired and replaced. Scheduled decommissioning dates start soon, and end in 2050 or later. Given that these assets were meant to be extinguished over time for the common good, we can choose to do so in the most beneficial manner. The value of the power stations does not stem from their steel and metal, but from the fact that they are able to produce electricity over the residual lifetime of the plant. If we can manage to sell the Eskom coal fleet at the “net present value” of this residual lifetime value, we will be able to raise enough money to pay back the Eskom debt. This can be done as described below.

How it would work

Figure 2: Assumptions and calculation of achievable proceeds from auctions

The cash injection for South Africa

We have chosen to use moderate, but still cost reflective, rather than subsidised electricity tariffs. The proposed tariffs per power station are sufficient to cover all operational expenses, and would leave a margin whose present value over the remaining lifetime, minus the present value of the funds set aside for rehabilitation, determines the achievable sales price.

In Category 1, this margin is pegged at R0.20/kWh, leading to PPA tariffs of R0.54 to R0.72/kWh, with the variance resulting from the different coal costs per power station. In Category 2 (Medupi and Kusile), the proposed contribution margin is R0.60/kWh, to be able to achieve a sales price sufficient to repay the associated loans on Eskom’s side. At such margins/tariffs, the country could raise approximately R450-billion from the series of auctions. This would settle all Eskom debt, and leave some valuable cash to upgrade the grid and recapitalise the new Eskom.

Who takes the risk of inefficiencies and cost overruns?

In principle, the coal fleet could be operated by Eskom at the same costs and prices by Eskom too. The problem however is that any cost overrun, inefficiency or corruption has to be paid for by the electricity customer or tax payer. It is a bit like trusting someone with a credit card and hoping he/she will be responsible. If the trust proves to be misplaced, the only option is to grimace and pay.

In this proposal, however, inefficiencies among the new owners would lead to losses for them, while the electricity tariff would remain unchanged. If the loss is too heavy to absorb, the new owner would have to liquidate and sell the asset, including the PPA, at a new lump-sum price to a new owner – but the PPA tariff would still remain unchanged. With a sold-off Eskom coal fleet, inefficiencies would lead to losses for the new owners, but not to the public.

It is axiomatic in the prevailing policy discourse that government should retain ownership/control over key economic assets, of which electricity is one. The present proposal leaves space for this to occur, in two ways:

Control over the grid practically constitutes control over the electricity industry. It is a natural monopoly and Eskom would retain that control. Government can control where the grid goes, who it serves, who supplies electricity into it, how it is maintained and how it is built to serve broader objectives like the National Development Plan. The electrons travelling on the grid are similar to the cars travelling on the national road network. It isn’t necessary to own every car in order to control transport in the country. Likewise, electricity can be procured from independent power producers while retaining control over the electricity system in the country. This has been successfully proven in many countries.

Beyond this, there is every possibility that public sector entities like the Public Investment Corporation (PIC) could invest in the auctioned Eskom power stations, either through equity or debt, or a mix of both, and pay a specialised service provider to operate the power stations on its behalf. They would in fact be exchanging an open-ended and precarious Eskom bond for an equity investment in a long-term infrastructure asset with a very predictable, long-term return – a much better position to be in.

While no entity may own more than 20% of the fleet to ensure fair play, there are different public sector pension funds and financial institutions that might be interested, while it might also be possible to finance equity for trade unions.

A major benefit of the proposal would be affordable and predictable electricity prices in the years ahead, because the bulk of the power system’s cost – the cost of power generation – would be pegged at long-term, fixed tariffs. In particular, the energy-intensive mining and beneficiation sectors would benefit significantly. Predictability is often even more important for long-term investment decisions than the absolute level of the tariff.

The National Treasury would be rid of a R350-billion Eskom guarantee, and would be left with far lighter offtake guarantees for the electricity delivered to the grid operator (which is a performance-based payment i.e. “no electricity, no payment”). The PIC may be able to significantly reduce the risk profile of its South African investments. Inefficiencies at any of the coal power stations would lead to a lower profit for the owner, but would not impact the electricity price. The scope for corruption would be significantly curbed.

Eskom would be able to concentrate on what it can do very well, namely: design, build and maintain the grid, and operate the power system as a whole. That capability of Eskom is a national asset, and could be leveraged to help electrify the African continent.

Eskom could become the “Super Grid Company” of Africa, and potentially one of the largest in the world. DM

This is a shortened and adapted version of an article that was first published in Business Day on 22 January 2018.

The authors were appointed as members of the inaugural Ministerial Advisory Council on Energy (“MACE”). Dr Bischof-Niemz was the founding head of the Energy Centre at CSIR, and previously worked for Eskom on the Integrated Resource Plan. He is now head of Global Business Development at Enertrag AG. Johan van den Berg is an advocate of the High Court of South Africa who was the CEO of the South African Wind Energy Association from 2011 to 2016, and is presently the Managing Director of Skrander (Pty) Ltd.