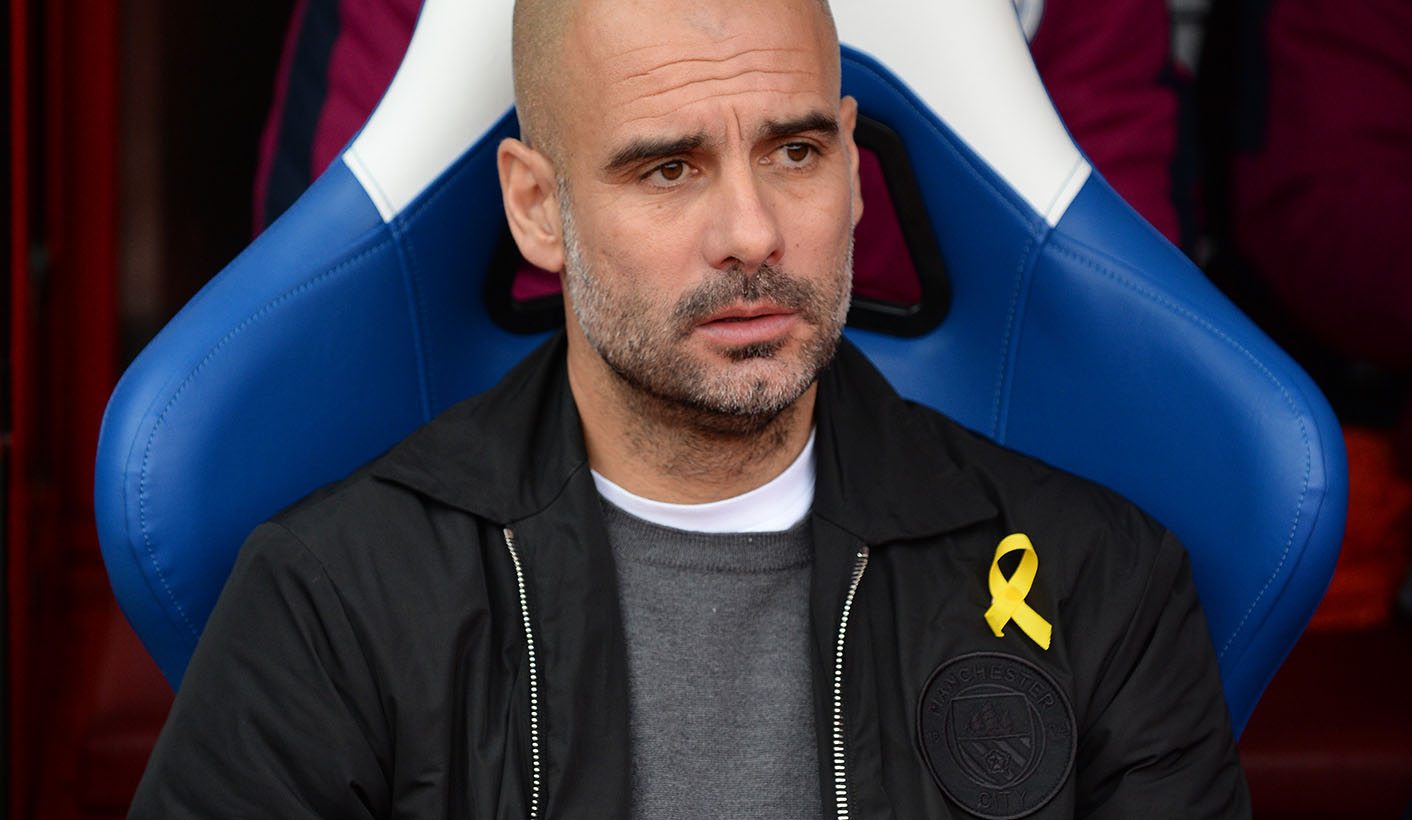 Manchester City boss, Pep Guardiola, has reiterated his stance that he will keep wearing a yellow ribbon in support of imprisoned Catalonian politicians and does not care if he gets banned. By ANTOINETTE MULLER.

That’s exactly what City’s coach, Pep Guardiola, did over the weekend when his side thrashed the Gunners 3-0 to take the League Cup.

He wore the ribbon to show solidarity with the Catalonian politicians who have been imprisoned since last year.

“There are four guys in prison and other guys, they don’t have weapons, just votes in the ballot. I said this is always with me and it always will be until the last. It’s not a lack of respect, it’s being part of humanity,” Guardiola said on Sunday in a post-match interview.

But his choice of accessory might not sit so well with England’s Football Association (FA). The governing body does not welcome political expression and there have been suggestions that Guardiola might be punished for his choice. But the coach remains defiant and repeated that his decision was “for humanity”.

“They (the FA) know I will wear it always. I can wear it somewhere else. UEFA have another opinion. They say you can wear it as long as it’s with respect. Here (in England) it’s different apparently,” Guardiola said.

“I have empathy for the people who have no freedom, those guys in Spain who are in jail. They haven’t been proven guilty. Anyone can be in that situation. Before being a football manager I am a human being and this is for humanity.”

Guardiola has always been outspoken as being pro-Catalan. He ran as political candidate for the pro-independence coalition Junts Pel Si in 2014 and often clashed with Spanish authorities over publicly expressing his support for secession.

In December last year his name was included in a report by the Guardia Civil which detailed alleged crimes by secessionists.

He has been wearing the ribbon since Catalan independence activists Jordi Sanchez and Jordi Cuixart were imprisoned by the Catalan authorities. Throughout, his message has been clear: “Like everybody knows, hopefully sooner or later I can stop wearing it (the ribbon). All the politicians that are in prison, I hope they can leave and go back home soon with their families and continue to live as they deserve.”

The political situation in Spain remains delicate, but Guardiola’s decision to be open about which side of the fence he is on begs an interesting question: what do we want from sports people?

Do we want them to be Stepfordesque, cookie-cutters bereft of opinion and personality?

Or, do we want them to be open about their views on certain issues? And what happens when we do not agree with those views?

Sport and politics have always been bedfellows, despite protestation that they should not mix: From sanctions against apartheid South Africa to, more recently, Colin Kaepernick and the #TakeAKnee movement.

Advocates for freedom of speech say that political opinions should be out in the open. Centrist opinions will suggest that careful policing is required in order to preserve the relationship with sponsors to ensure that events remain neutral.

It was previously been suggested that the rule has been changed – or at least relaxed – hence the reason Fifa relaxed its ban on the poppy symbol. The FA, however, insists that the poppy is not political, but academics disagree.

Thus, what constitutes a political statement is clearly subjective.

Guardiola has defied the FA once more, having already been charged by them in the lead-up the weekend’s fixture.

And he is clearly willing to sacrifice his place on the touchline for a cause he strongly believes in. It remains to be seen what action will be taken – and what precedent might be set for future expressions. DM