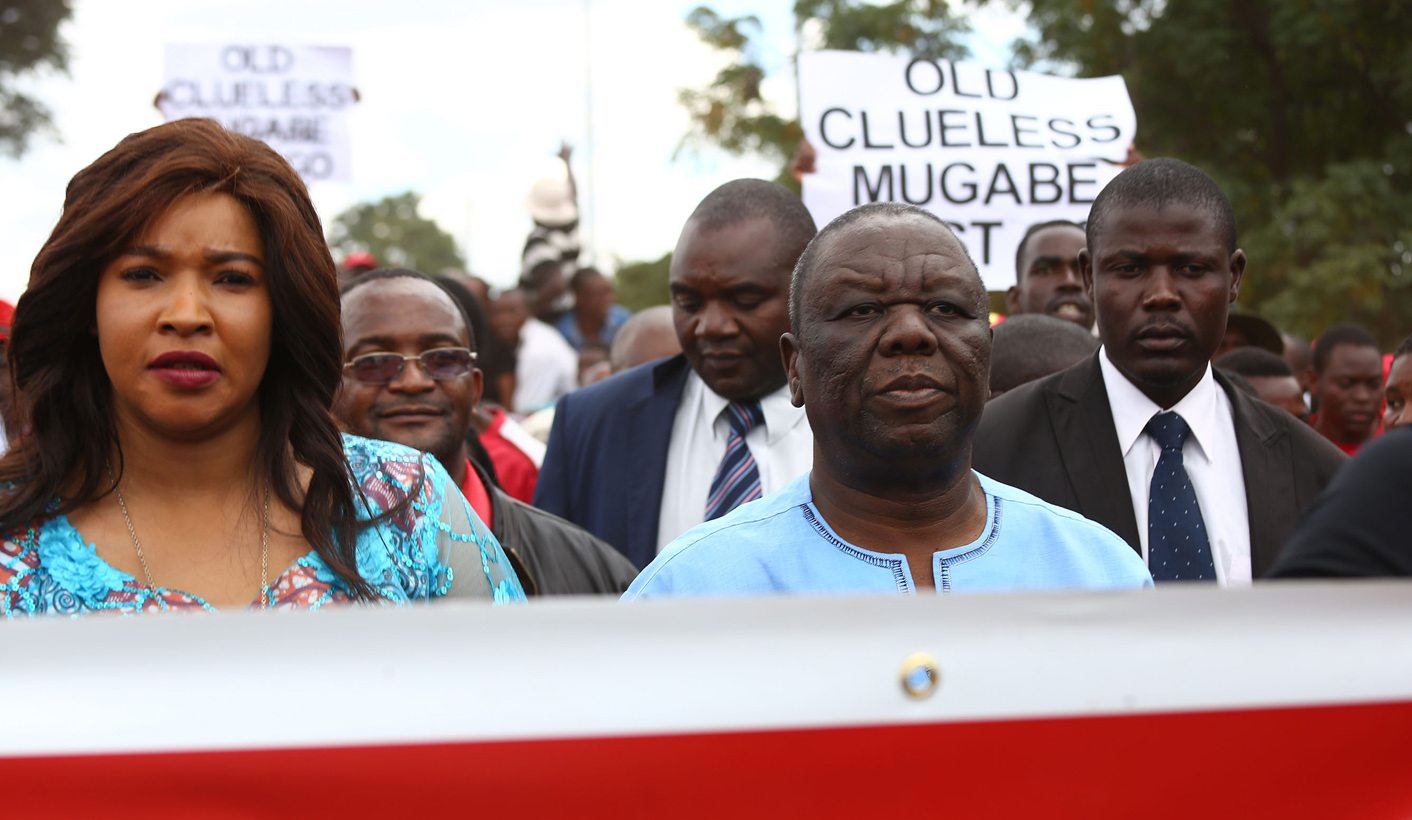 At both the memorial service of Morgan Tsvangirai and the funeral service itself, attempts were made to make his wife, Elizabeth Tsvangirai, invisible, by leaving her unmentioned and unacknowledged where and when it mattered. By TINYIKO MALULEKE and NTHAKOANA NGATANE.

The well-attended and moving funeral of Morgan Tsvangirai, the president Zimbabwe never had, was also the terrain on which various life and death (pardon the pun) contestations ensued. The worst of these played out in ill-treatment of Mrs Elizabeth Tsvangirai.

If you wanted to understand what was really going on at that state-assisted funeral, you did not need look at the expensive coffin, draped in the colours of the Movement for Democratic Change Tsvangirai (MDC-T). Nor would an analysis of the platitudes and the flowery eulogies shed any more light on the meaning of the funeral.

Instead, you should have searched for Mrs Elizabeth Tsvangirai.

You wouldn’t have found her on stage inside the main funeral marquee at Humanikwa village in Buhera. She wouldn’t have been at the centre of the stage. And no, she was not the woman who was nicely ensconced in the seat reserved for the chief mourner on the front row.

You see, shortly after her husband died, Elizabeth Tsvangirai was systematically relieved of her position and duties as wife. According to some reports, she was even excluded from the cleansing rituals normally undertaken by families after death. There was, apparently, no space for her in the helicopter that transported the coffin of her dead husband from Harare to Buhera.

But still, if you wished to really, really understand what was going on at that funeral, you’d have had to search for her. Maybe she installed herself in the middle of the weeping throngs, disguised as an ordinary mourner. Was she the woman dressed in a light blue cape and white head-scarf on the second row? Maybe she mourned her husband stoically and quietly, from a safe following distance, a distance enforced by misused ‘culture’ and the depraved ‘politics’ of succession.

And yet, if you were to find Elizabeth Tsvangirai, you would be well advised to take your time to look deep into her eyes; for the real funeral of Morgan Tsvangirai was taking place inside of those forlorn and sunken eyes, awash with tears.

That is precisely what Oliver Mtukudzi did. Instead of focussing on the casket in which the body of Morgan Tsvangirai lay, he ‘opened the eyes of his heart’ and saw Elizabeth Tsvangirai. How else can we explain his choice of the song ‘Neria’ as tribute to Morgan Tsvangirai? Mtukudzi does, after all, have a fitting song for a national hero. But he did not choose that song. Instead he chose Neria – a song in support of a bereaved and ill-treated widow. And so crooned Oliver Mtukudzi:

The song calls out a set of common but despicable practices in Africa and in the world. In some ‘developed countries’, so-called; they go about these practices in more sophisticated ways. But what many nations have in common is the tendency to seek to disinherit and permanently impoverish women, by discouraging or preventing them from owning property obtaining wealth, title or status. This is the ultimate purpose of the systematic isolation, exclusion and excommunication of Elizabeth Tsvangirai. In fact, the intention of these and similar patriarchal practices is to ensure that women own nothing – not their husbands, not their children and not even themselves!

In some countries, there are laws that limit the rights of women to property ownership, deferring these to their sons at the death of husbands. Only late last year were women allowed to drive in Saudi Arabia.

Mrs Tsvangirai is a victim of some African variation of the same global practices of patriarchy, female disinheritance and misogyny. Such is the power of the gods of patriarchy, they summon both men and women to serve them and to worship male supremacy and hyper-masculinity.

It seems Maiguru Lydia Tsvangirai, Morgan’s mother, as mother of the bereaved and senior woman of the family, believed that she, and she alone, held her daughter-in-law’s invitation card to her own husband’s funeral. She was reported to have said the following in reference to her daughter-in-law and Nelson Chamisa, the interim leader of the MDC-T: “If Elizabeth and Chamisa come to the funeral I will commit suicide.”

Apparently, to show her displeasure and her unwillingness to share the stage with the two, Gogo Tsvangirai ‘boycotted’ the memorial service at Robert Mugabe Square, remaining inside the hearse throughout the service.

Her tantrums started while Tsvangirai was in hospital in South Africa, when the hospital was apparently instructed to allow no one except Maiguru Lydia to be by his bedside. Rumour has it that the ailing Tsvangirai protested and asked for his wife to be by his side, but in vain.

At both the memorial service and the funeral service itself, attempts were made to make Elizabeth Tsvangirai invisible, by leaving her unmentioned and unacknowledged where and when it mattered. Instead, the deceased wife of Tsvangirai, Susan, and her family were acknowledged. Would she have been recognised if she were alive? Must a woman die in order to be recognised? Even so, what more must a man’s chosen and living wife do, to be recognised by family and comrades as a ‘lawful and wedded wife’ after the death of her husband?

Some of the hush-hush and clearly malicious ‘allegations’ against Elizabeth Tsvangirai include that she is supposed to have tried to influence Tsvangirai in ways that would disadvantage the MDC in favour of Zanu-PF. There were also allegations that she intended to choose the successor to Morgan Tsvangirai. There were also the usual slights to the character of a widow that were being whispered around.

So what exactly was going on here? This is the moment when the fiction in the movie Neria melts into reality. The script of the movie was written by celebrated Zimbabwean writer and filmmaker, Tsitsi Dangarembga. Just like in the movie Neria, just like it has happened so many times in Zimbabwe and elsewhere, a vulnerable widow was at the mercy of ruthless brothers, marital uncles, marital aunts, step-mother, step sons and comrades.

But this is not only about disinheritance, it is also about misogyny.

Observe how after his death, Morgan Tsvangirai was swiftly transformed into a saint whose only ‘weaknesses’ were his wives. The only good wife Morgan ever had was the dead one, it seemed. Indeed, in the political economy of patriarchy, the only good woman is a dead one.

See, there was nothing wrong with Tsvangirai, it is the women in his life, especially the last one! As if Tsvangirai had no agency.

Consider how the same narrative remains in relation to Robert Mugabe, who was allegedly made and broken by the women in his life. The story goes something like this. Mugabe’s long suffering single mother, Amai Bona Mugabe, loved him out of poverty and “handed him a moral compass”, his wife, the intelligent and cultured Ghanaian, Sally Hayfron, took over from where his mother left off and loved him into a good African President. But that was before Grace Marufu came along. “While Bona Mugabe and Sally Hayfron did everything they could to curb a dangerous streak of violence in the man they both loved – Grace Mugabe did everything she could to set it free.”

See, there was nothing wrong with Mugabe, it is the women in his life, especially the last one! As if Mugabe had no agency.

But there is method in this apparently mad reasoning. The method is called patriarchy. Women exist to serve men and to serve them well. Men exist to be served and to be served well by women.

Tinyiko Maluleke is a Professor at the University of Pretoria. His research focuses on the intersection between culture, politics and religion. Nthakoana Ngatane is a political reporter and journalist with the SABC. She covered the Tsvangirai funeral.

Photo: Leader of the opposition party Movement for Democratic Change (MDC-T), Morgan Tsvangirai (C), his wife Elizabeth (L) along other party supporters march during a protest against poverty and corruption, in Harare, Zimbabwe, 14 April 2016. EPA/AARON UFUMELI