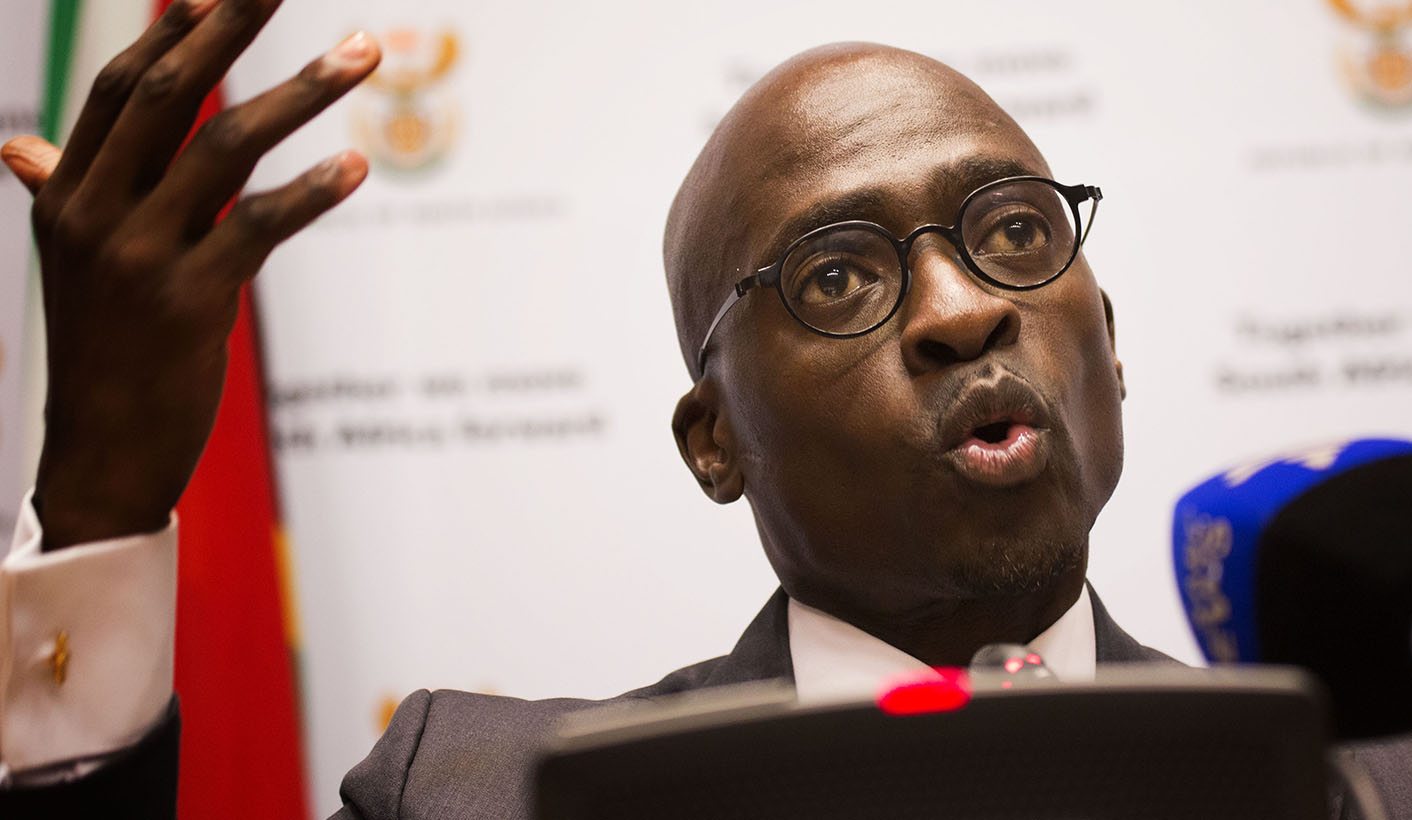 For the first time in democratic South Africa value-added tax (VAT) is raised  by one percentage point to 15% as part of the tough but hopeful Budget Finance Minister Malusi Gigaba presented on Wednesday. The VAT hike is central in a set of tax increases, including higher estate and luxury goods duties and an extra 52 cents per litre in fuel levies, to generate an additional R36-billion for the national purse. The tax hikes come alongside R85-billion government expenditure cuts over the next three years to fund inclusive economic growth and social spending, from free higher education to health care and social protection. By MARIANNE MERTEN.

The increase in value added tax (VAT) to 15%, from 14%, with effect of 1 April 2018, is a tough political choice. Trade unions and civil society organisations are on public record opposing this option.

But Finance Minister Malusi Gigaba, speaking to media ahead of delivering his maiden Budget, maintained this was the right decision, and one with the least negative consequences for economic growth or social protection. And South Africas VAT rate was still below peer countries like Argentina, Zimbabwe and Russia.

There would be talks with the trade unions once the announcement was made. It is difficult to consult about taxes prior to the Budget because we dont want not to take the decision, said Gigaba, adding that it was important to note the basket of zero-rated food remained to protect poor households. And above inflation social grant increases, alongside steps towards free higher education, were key in shielding the poor. In any case, the VAT increase would predominately affect higher income earners.

It was this message he later also relayed to MPs in the context of a R1.67-trillion budget that sought to stabilise public funding, while improving South Africas fiscal status. Increasing VAT was unavoidable if we are to maintain the integrity of our public finances, he said in the House.

According to the Budget Review, additional personal income tax increases were not an option. These would have had greater negative consequences for growth and investment than the VAT increase. South Africas personal tax burden has steadily increased in recent years  last year saw a one percentage increase in personal tax for all but the lowest income earners and a new tax bracket for those earning over R1.5-million a year  amid a household debt ratio of 72.5% in the third quarter of 2017.

The VAT hike became necessary due to a budget shortfall of R48.2-billion, largely due to the failure by the South African Revenue Service (Sars) to hit tax collection targets. The initial shortfall of R50.8-billion announced by in the October 2017 Medium-Term Budget Policy Statement (MTBPS) was revised down since a reduction in loan redemptions, and some R3-billion in additional tax collection since last year.

And there are other tough decisions. The R85-billion reduction in government expenditure over the next three years is funded by cuts at national level of R53-billion, but also reductions in the transfers to provinces and local government, R5.2-billion and R3.2-billion respectively. The Budget Review document also lists reductions in at least some of the conditional grants  overall these will be cut by R28-billion, according to the Budget Review  like the human settlement development grant that is reduced by R7.2-billion. Although this will slow the delivery of new houses and serviced sites, the sector is still expected to build 316,813 houses and upgrade 417,391 sites in informal settlements

For Gigaba, Wednesdays R1.67-trillion Budget for the 2018/19 financial year was juggling act to put the rands and cents to governments focus on renewal, confidence and collaborative partnerships. The outlook for South Africas economy remains fragile even amid a recovery of commodity prices and greater confidence since President Cyril Ramaphosa was sworn in earlier this month.

Economic growth is projected at 1.5% for 2018, slightly up from the below 1% anticipated last year. While inflation is down, and is expected to remain around 5.3% for 2018, the debt to gross domestic product (GDP) remains high: it is expected to stabilise at 56.2% by 2023, although thats somewhat less than the 60% anticipated in Octobers MTBPS. Borrowing requirements increased to R246-billion, up from an initially projected R220.9-billion. The budget deficit is anticipated to stand at 3.8% of GDP in the 2017/18 financial year, dropping to 3.7% by 2021. Governments debt service costs stand at R180.1-billion in the 2018/19 financial year.

As the Budget Review puts it: The recovery in economic growth is not yet broad based. Much depends on continued improvements in political and political certainty and a supportive global environment.

But Gigaba was confident. The Budget plans, he told journalists ahead of his Budget speech, are sufficient to restore sustainability The decisions, as difficult as they are, will have the least effect on growth We need to sustain the momentum of change so that we continue to boost confidence that will assist the economy to grow going forward.

In line with governments new dawn direction to ensure all South Africans are participants in the economy and can expect a better life, the largest slice of the R1.67-trillion budget goes to social services, which account for R1.01-trillion. Education remains the biggest budget line item at R351.1-billion, followed by health at R205.4-billion and social development, including the 17-million grants, at R259.4-billion. Peace and security are allocated R200.8-billion.

The challenge of our time, to build a South African in which all people have a decent standard of living, access to economic opportunities and opportunity to pursue their dreams. It is these core aspirations which the Budget must speak to, enable and indeed, advance, said Gigaba in his Budget speech. We stand before you with a profound sense of optimism, purpose and resolve.

And so the money was found to fund the progressive introduction of free higher education  R57-billion over the next three years, with R12.4-billion available in the 2018/19 financial year to fund students from households earning below R350,000 a year. Returning students would have loans converted to non-repayable bursaries, said Gigaba: This is an important step in breaking the cycle of poverty and confronting youth unemployment.

The phased implementation of the National Health Insurance (NHI), to provide universal access to quality health care received R4.2-billion through adjustments to the medical tax credit. In addition further allocations were made to the fight against HIV/Aids.

Money also was found for the above inflation increases in social grants. From 1 April, old age pensions increase to R1,690 a month, and again from 1 October to R1,700 a month. The child care grant increases by R20 to R400 a month from April, and to R410 a month in October 2018.

And R6-billion was found for drought relief and related public infrastructure development. We need to conserve water. We have among the highest levels of per capita daily domestic water consumption levels in the world, but also some of the highest levels of inequality in reliable access to water, the Finance Minister told MPs.

While most immediately government expenditure cuts are financed through reduced allocations to provincial and local governments, the 2018/19 Budget also focused on increased spending efficiency. Thus the budget facility for infrastructure within the National Treasury aims to improve planning and execution of large infrastructure build projects. And Gigaba has made undertakings with regards to a dialogue on mining policy  the Chamber of Mines’ legal challenge to the mining charter was put on hold for now after a meeting with Ramaphosa  and greater governance and financial management accountability by State-owned Entities (SOEs) like Eskom.

Fiscal discipline would be maintained, Gigaba said as the mantra of taking the tough decisions for sustainability and growth became the thread through the 2018/19 Budget.

We dare not borrow irresponsibly, leaving it to future generations to repay, Gigaba told MPs, adding later: Let this be the year of renewal, revitalisation and a steep change in progress in fostering inclusive growth which rolls back unemployment, poverty and inequality. The opportunity is before us. DM