Reporter’s Notebook: Walking with the President 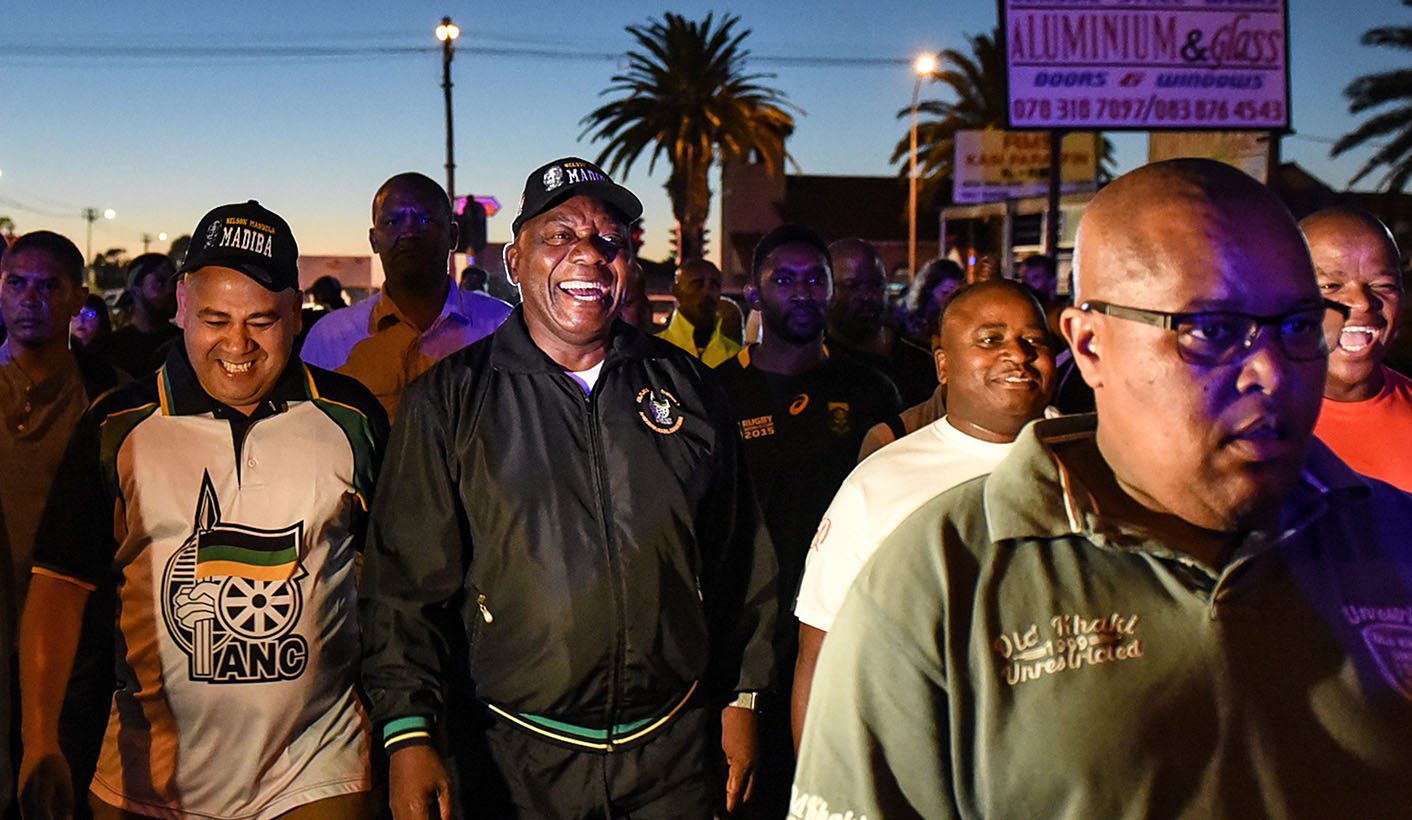 There are few South African politicians who could get Capetonians out of bed at 5am on a weekday simply for the pleasure of a walk in their company. President Cyril Ramaphosa, it appears, is one of them. On Tuesday, Ramaphosa carried out what now looks to become a trademark move: an early-morning walk with the public, this time far from the Sea Point Promenade. By REBECCA DAVIS.

President Cyril Ramaphosa walks fast. If you’re planning to join him on one of his early morning strolls, be prepared for a blistering pace. Also: be ready to get up with the birds. When the president’s vehicle deposited him at the Gugulethu Sports Complex on Tuesday morning, the sun was barely rising.

“I’ve never woken up this early,” one ANC official admitted, rubbing his face.

The president, by contrast, looked fresh as a daisy, alighting from his car in a black tracksuit and a pair of Nike sneakers.

“So many people! Wow!” Ramaphosa said, in apparently sincere surprise. “Everybody wants to be fit!”

There were, in truth, not that many people gathered to walk with the new president: maybe 100. Perhaps this was because the notification about the walk posted on Monday by the ANC Western Cape on social media appeared to have “fake news” written all over it.

“PRESIDENT PROMOTES A HEALTHY LIFESTYLE: DAILY MORNING WALKS,” it advertised, atop a picture of Ramaphosa snapped on one of his dawn perambulations last week on the Sea Point Promenade. “Join President Cyril Ramaphosa’s walk from Gugulethu Sports Complex to Athlone Stadium”.

It read, in fact, as a piece of satirical commentary about Ramphosa’s apparent fondness for strolling on the Atlantic Seaboard rather than in less scenic parts of Cape Town.

When the umpteenth selfie of Ramaphosa on the Sea Point Promenade surfaced last week, a colleague commented cynically: “He better get to Gugs [Gugulethu] fast.” After all, walking in one of Cape Town’s most exclusive suburbs doesn’t do much to dispel the perception that Ramaphosa is more at home among elites than “the people”.

An ANC official admitted as much on Tuesday as we waited for Ramaphosa. “We did say he couldn’t just walk in Sea Point,” he said.

So in a masterstroke of PR, Ramaphosa will now embark on weekly walks with the public wherever he happens to be in South Africa, organized by local ANC branches. Next week, Ramaphosa said, he will be walking in another Cape Town township.

It’s a savvy move. South Africa hasn’t seen this level of ordinary public engagement from a president since Nelson Mandela – and judging by the rapturous response of Ramaphosa’s fellow walkers on Tuesday morning, South Africans are hungry for it.

It’s also being branded as a fitness campaign. “Mkhaba [pot-belly] must fall,” Ramaphosa repeatedly chuckled as he walked. This alone is something new: did anyone ever see Jacob Zuma do any public workout beyond the odd round of charity golf or a ceremonial stick fighting demonstration?

“So this one exercises?” marvelled Uber driver Jethro as he dropped me off in the dawn.

He does indeed. As he walked, Ramaphosa explained to those around him: “I started with 2, 3 kilometres, then 5, then 10. Once I did 16!” This was not the last we would hear of Ramaphosa’s 16 km personal best.

“I was advised not to run at my age. They said it might damage my knees,” the president added.

It was a cheerful group that walked alongside Ramaphosa, seemingly happy to be around him without pestering him for attention. Or selfies. When one young man inevitably did make the selfie request, Ramaphosa told him kindly that the photograph would have to be taken as they walked.

“If we stop, everyone wants one,” he said, smiling.

The walking group did not attract too much attention from tired Cape Town commuters, though the odd car wised up to Ramaphosa’s presence and slowed down to hoot.

“Amandla!” cried a dustman hanging off a refuse truck, his fist lifted in salute.

Two women in dressing gowns came out to see what was happening.

“Let’s pick up the pace! He has a meeting to get to!” cried Western Cape ANC secretary Faiez Jacobs.

“Very good, Faiez,” chuckled Ramaphosa. “Now you are being a secretary!”

The president was initially flanked by ANC officials, but he took care to disengage himself from their company after a while.

“I’m going to leave you to talk to other people,” Ramaphosa said, grabbing an outstretched hand. “Who are you?”

He listened attentively to one potted bio after another, often clasping people around the shoulders as he walked. Among those queuing up for his ear were Gugulethu locals, two blonde American exchange students, and former 7s rugby player Tonderai Chavhanga.

“I recognize your face!” Ramaphosa said delightedly to the latter. “I’m walking with a giant!”

As the kilometres ticked by, some walkers fell away. But as we entered the suburb of Athlone, new supporters emerged.

“Hi Cyril!” cried a family in unison, waving frantically from their balcony.

At the walk’s end point of Athlone Stadium, Aunty Veronica – aged 75 – was ready with an almost hysterical welcome for Ramaphosa.

“Good morning Mr President, we love you!” she shrieked. “I have been waiting for this day!”

Inside the stadium car park, Ramaphosa told the group: “We did almost six kilometres! Give yourselves a round of applause!”

The president described his daily walks as a “moment of reflection, a moment of meditation, but also a moment of trying to get fit”. He encouraged South Africans to follow his example: “This is the cheapest way of doing it!”

When a journalist tried to lower the tone by asking whether a Cabinet reshuffle would precede Wednesday’s Budget, Ramaphosa laughed it off.

“This is the time to walk, to reflect,” he said; and with that, the president disappeared into his car and was gone.

A faint sense of unreality hung in the air after his departure. Some walkers lingered, clearly still a little star-struck.

One shook his head. “That man has so much swag,” he murmured. DM