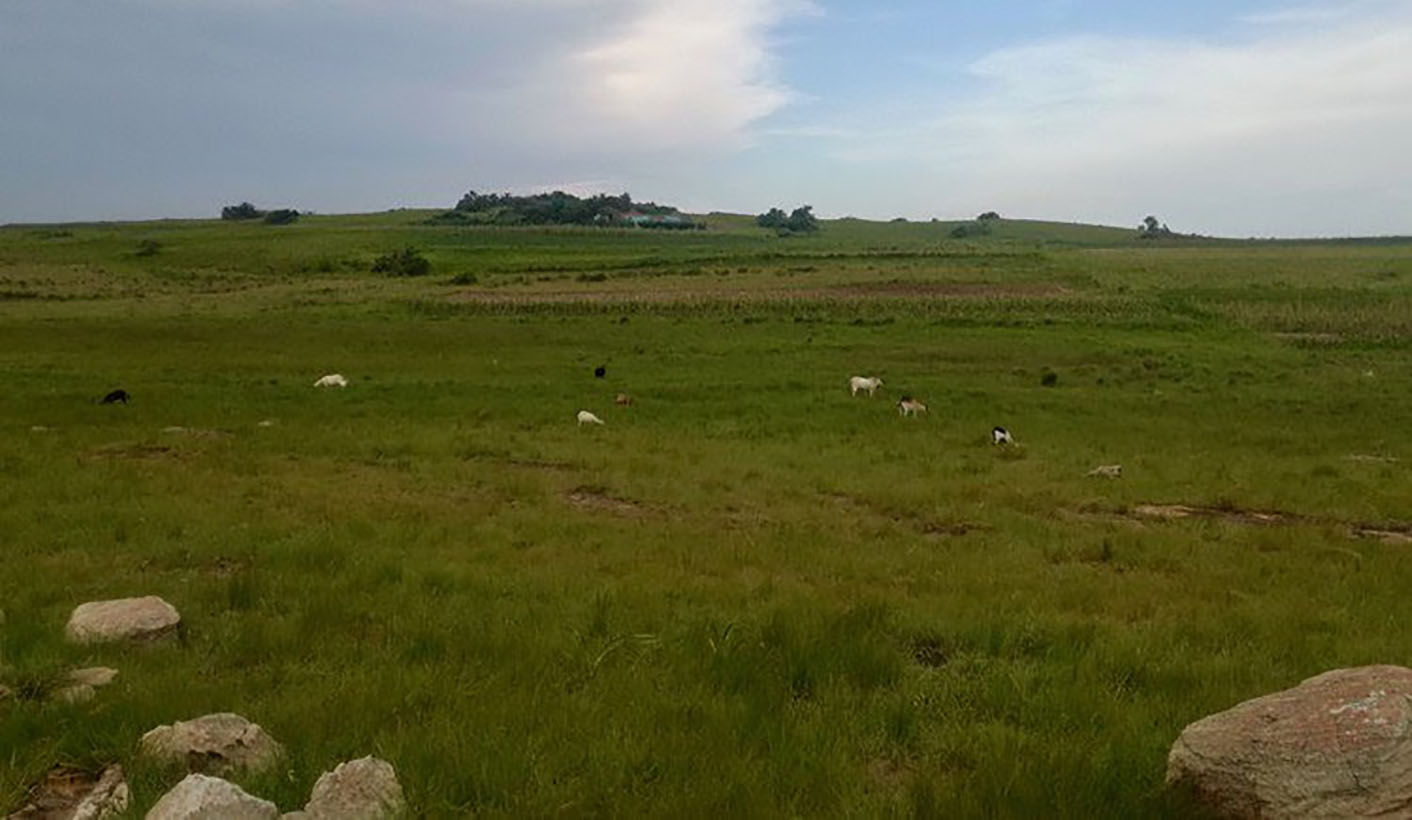 Mgungundlovu residents and government to meet in court in April. By Thembela Ntongana for GROUNDUP.

Resident Zenzele Gampe says a battle over mining the land has divided his community. “We are no longer the community we were and never will be the same. Now some people can’t even visit each other because we have become enemies.”

“If a person who is against the mine has a funeral, those who want the mine won’t come and vice versa. Before it was never like that.”

It is 3pm in Umgungundlovu on the Eastern Cape Wild Coast and many people are busy on their plots of land, while some are making their way home. The gardens are full of fruit and vegetables. Children are walking back from school; others are already out of their school uniform and herding cattle. Women are busy cooking outside their homes.

“I know I could be killed anytime because there are people who want to force us to agree to leaving our homes and our traditions,” says Gampe.

He is sitting outside his thatched roof rondavel eating mealies while his wife makes supper. He has been out in the garden the whole day. The mealies he is eating he harvested the previous day.

Gampe was born and raised in Sigidi, the first village in Umgungundlovu as you travel from Bizana, the nearest town. He lives with his wife and nine children. Most of his day is spent working in the garden, where, like many of the villagers he gets most of his food. He also sells some of his vegetables.

Gampe is hostile to attempts by Transworld Energy and Mineral Resources (TEM), a subsidiary of Australian mining company MRC, to get mining rights for titanium in the area of Xolobeni, one of the villages in Umgungundlovu.

The battle over mining rights is violent. Activist Sikhosiphi Bazooka Rhadebe, who was the chairperson of the Amadiba Crisis Committee, an organisation that has been fighting against the mining, was assassinated in March 2016.

In September 2016, Minister of Mineral Resources Mosebenzi Zwane announced an 18-month moratorium on mining in the Xolobeni area, which froze the application by TEM and prevented any further mining applications.

Now villagers are taking Zwane and the Minister of Rural Development and Land Reform to court in a bid to stop mining rights being granted over land held by the community in terms of customary law.

The case will be heard for three days at the Pretoria High Court starting on 23 April.

In her founding affidavit with 128 other applicants, she says households have collective rights over their residential and arable land according to customary law. Many of the households earn income from farming and fishing and from eco-tourism. She says mining will displace residents from their homes, ruin fields and gardens, cause the loss of communal resources such as medicinal plants and wood, and block access to the sea.

Should the mining licence be granted, she says she fears there will be increased pressure on schools and clinics, a rapid increase in backyarders and shack dwellers, an increase in crime and alcohol abuse, and a loss of traditional livelihoods.

The Bench Marks Foundation also submitted a supporting affidavit. The foundation says that while mining can provide benefits, communities are vulnerable to harm which often outweighs any gains. Communities should be able to determine whether mining should occur on their land or not.

The applicants say TEM has failed to show how it will lessen the impact of its mining, or compensate the community, or how it will restore the livelihoods lost through mining.

The applicants argue that granting mining rights would deprive them of rights enjoyed under the Interim Protection of Informal Rights to Land Act (IPILRA). This law protects people from being deprived of any informal rights to land they may hold.

But in a responding affidavit, the Minister of Mineral Resources says the Mineral and Petroleum Resources Development Act (MPRDA) does not require compliance with IPILRA for the granting of mining rights.

The Minister also argues that IPILRA does not apply because the community of Umgungundlovu is defined as owner of the land and the MPRDA does not require consent from the owner to grant mining rights.

The granting of mining rights does not affect any land ownership, and should the use and enjoyment of land be affected by the mining right, the MPRDA provides for compensation.

Villagers like Gampe remain resolutely opposed to the mine. “We are happy with how our life is; we do not want to move anywhere. I have buried my children, grandchildren and parents here, and I would never leave them nor would I move their graves.”

There are ten graves under a tree that an outsider would barely see, but Gampe can point to exactly where each family member is buried.

Altogether there are more than 450 graves in the proposed mining area. Traditional belief is against the removal of graves, and when it has to be done, this is costly to the family.

One of those in favour of the mine is Bashen Qunya. He is the brother of Zamile Qunya, the founder of the Xolobeni Empowerment Company (Xolco) and a director of Tormin. When GroundUp contacted him, Bashen Qunya was quick to head off discussion about the mine. He said he was now focused on the construction of the N2 toll road that goes through the Wild Coast.

“There is no mining happening now because of people who do not want to see development, people who act like they care for the poor, but are only doing it for themselves … Didn’t you hear? We have moved on now. They have won. They have chased out development,” said Qunya.

Qunya said there were many families who supported mining. We asked him to put us in contact with them, but he said he did not have their details. Support for mining is apparently higher in the more distant villages where there is less arable land, but we were unable to get there. So despite Gampe’s concerns about a divided community, we were unable to see much evidence of this.

Asked about the violence in the area, Qunya distances himself from any form of violence.

However, he has been interdicted along with five other men after a shooting took place after a meeting. He was also accused of assaulting a 61-year-old woman with a knobkierie and a bush knife. He says the charges were dropped. DM