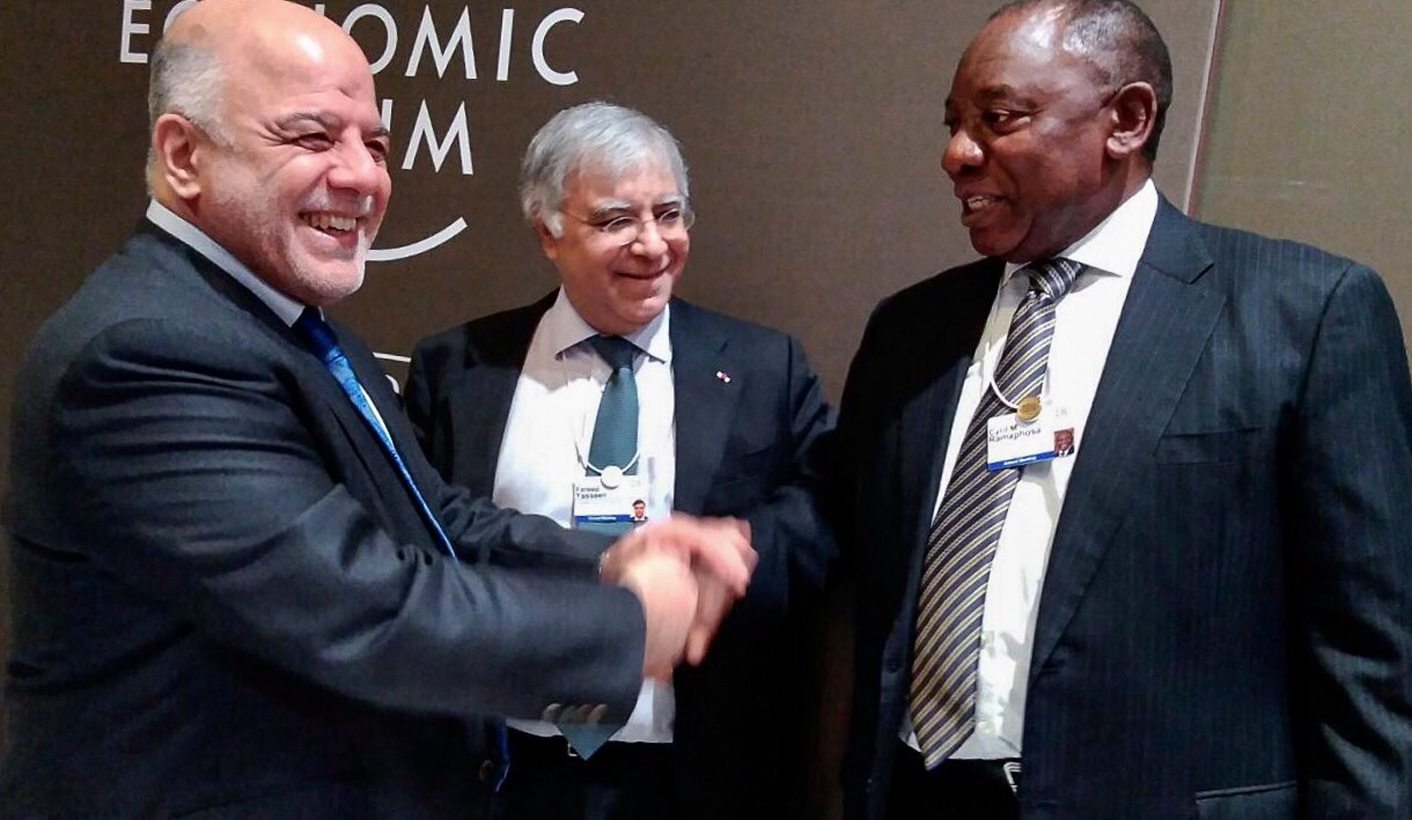 President Cyril Ramaphosa’s maiden State of the Nation Address was designed to give heart to a nation that had been thoroughly pistol-whipped by his predecessor’s excesses and daily embarrassments. To read or listen to reaction, in this he largely succeeded. There was one fascinating exclusion from the speech – and that was virtually any sense of South Africa’s foreign relation. And this seems to have been a calculation by the new president that he will be judged, not by his pronouncements on this or that international issue, but by his success or failure at reinvigorating the nation’s economic circumstances. J. BROOKS SPECTOR takes a look.

There was a time when any self-respecting revolutionary leader in what used to be called the Third World routinely had very big ideas and dreams for international relations – and speeches to go with them.

Indonesian President Soekarno, together with people like Indian Prime Minister Nehru and Yugoslav President Tito, almost literally created that idea of the Third World – poised between those OECD-type nations versus the Soviet Union and its clients – with their Non-Aligned Movement and the Bandung Conference.

China’s Mao Zedong similarly projected the ideas of a whole new construction for the concert of some nations against all those old tired imperialist forces. When independence came to most of Europe’s African colonies, people like Ghana’s Kwame Nkrumah and Guinea’s Sekou Toure became big men on the international stage, even if their respective countries’ resources and heft ultimately could bring little to bear on that idea. Then there was Cuba’s revolutionary leader, Fidel Castro, whose ideas were eagerly embraced by two generations of leftist leaders and would-be leaders in Latin America and beyond. And closer to home it was, first, the idea of the imprisoned Nelson Mandela, and then his concrete reality after 1990, that became the inspiration for great change in South Africa.

This time around, we are on different territory. With Cyril Ramaphosa’s replacement of Jacob Zuma as South African president, a very different dynamic is now at work in defining South Africa’s connections to the rest of the globe. Ramaphosa, of course, has a real pedigree from the country’s liberation struggle. There was his role as a pioneer in mass black labour unions via his stewardship of the rise of the National Union of Mineworkers. There was also his role in the United Democratic Front in pushing for the end of the apartheid regime.

And then there was his internationally lauded and crucial role in the negotiations for the country’s new, non-racial Constitution. His subsequent engagement as an enormously successful deployee into the country’s business sector (including service on the board of directors of the mining house, Lonmin) and then his tenure as deputy president under Jacob Zuma have left some on the left less than overwhelmingly enthusiastic for him. But what’s done is done, and now he is the man in charge, at least until the verdict of the general election in 2019 anyway.

Last week, as virtually every South African – and many others abroad – knows, Ramaphosa gave his maiden State of the Nation Address. In hearing this man deliver his text, the nation – or at least most of it – seemed to participate in a conscious show of relief. Here was a politician who was not afraid of ideas, who enjoyed giving a speech, and who even seemed to be able to add a bit of ad hoc humour with his ribbing of one of the opposition leaders without it turning into a donnybrook.

Most of his national audience was delighted to hear a president who admitted and embraced the idea that the country was in a bit of a muddle; that there was much to be done to fix things, and that his administration was ready to dig right into this task – even if he had not yet gotten around to replacing those Cabinet officials who could be fingered as having been handmaidens to the making of the mess in the first place.

Admittedly, much of what he outlined, at least for the time being, was a series of conferences, committees, working groups and the like, rather than a specific “to-do list” of measures; but by the time of the speech he had only been in charge for a day, so there is still some patience for the putting of meat on the bones of a Ramaphosa administration.

But what was truly startling was how little time in that speech was allocated to South Africa’s place in the world beyond being a place for foreign investment or trade. Indeed, almost the entire speech was imbued with the idea that the government must effectively manage its roster of properties – those derided, cash-guzzling State-owned Enterprises – and all its offices and agencies, if it is going to achieve the new president’s objective of the creation of an effective developmental state that will jump-start the country’s economy. There is the understanding that these efforts are crucial in making the economy’s mechanisms grow, add jobs, and increase their incomes. There was a refreshing recognition that, in their current management, those SOEs and the government agencies proper, as well as government-private sector relationships, are not positioned to grow the economy and employment.

In fact, almost the entire speech focused on those dimensions of governmental action – whether it was educational achievement and quality, or the allocation of support for small and medium enterprises. But what was not in the new president’s speech were any of those traditional incantations about assertions of continental leadership in the world; support for revolutionary movements in the Western Sahara or Gaza/Palestine; the sacredness and centrality of the country’s participation in the BRICS grouping, and opposition to all those Western capitalist nations and their international banking allies. Instead, what we heard was the mantra of economic growth, the creation of an investor-friendly economy, the establishment of a stable regulatory framework for such investors, and support for growing manufacturing for the exportation of products as well as agricultural exports, and the nurture and support of the country’s tourism industry as an income earner for the country. Most of these comments from Cyril Ramaphosa would not have been out of place in the speech by any growth-hungry national leader in the world today from places eager to pump up their national economic stats.

Foreign affairs, beyond his focus on the creation of a better climate for foreign investors, only showed up towards the later minutes of this State of the Nation Address. And here he spoke yet again of trade, with his enthusiasm for concluding a free trade framework that could tie together the three main economic and trade pacts in Africa – the SADC and its counterparts in West Africa and East Africa. There was also a brief mention of BRICS, a grouping that used to be the prime orientation for his predecessor. All Ramaphosa said was, “South Africa will this year take over the chair of the BRICS group of countries, and will give priority to the promotion of value-added trade and intra-BRICS investment into productive sectors.” And that was that. No need to waste much valuable time on any obsessive concentration on an international talk shop only taken seriously by South Africa.

If potential foreign investors have been parsing this nascent Ramaphosa plan for progress, they might well have noted various possible places for considering future investment opportunities, and they have almost certainly taken heart from the promises to push the nation’s SoEs and government into being more effective in delivering on their mandates and his promises.

The one thing that might well be a flashing yellow light for them, however, might be the promise of land expropriation without compensation; not because of the need for land reform, but because of what it might imply for the security of property ownership and any possible implications for foreign investments. Of course this is one of the great conundrums for South Africa’s economic future and political stability – squaring property rights with economic justice, and with the possible effects on food security and food pricing.

Dealing with this difficult equation will be one of the key ways South Africans – and foreigners and potential investors alike – will evaluate Cyril Ramaphosa’s success in blending his business-friendly, growth-centred, “it’s the economy, stupid” messaging with the great and urgent need for achievements that will generate greater economic equality for the majority of South Africans. Toughest job in the country, without a doubt. DM