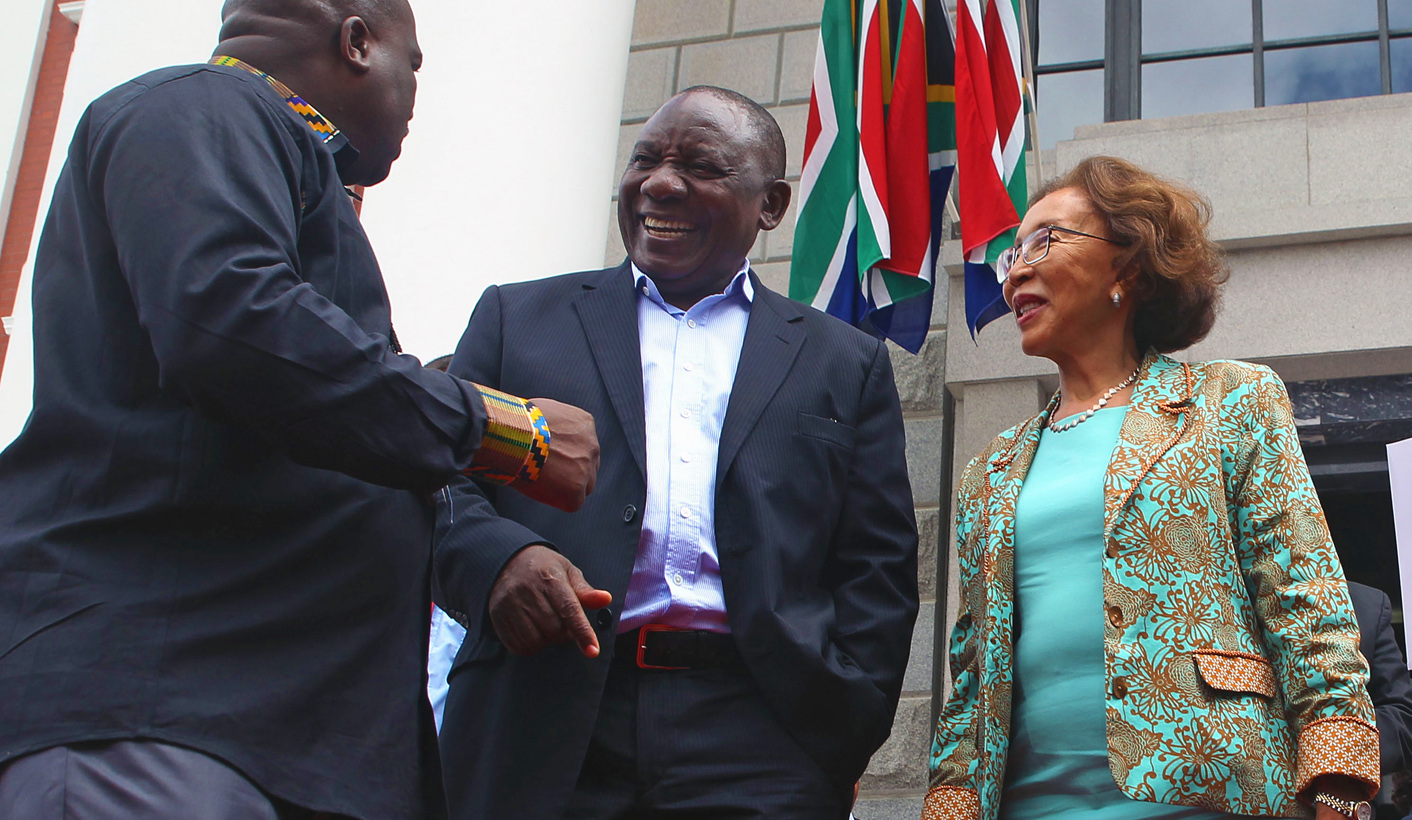 President Cyril Ramaphosa’s promises to shake up government to improve service delivery and to sweep out corruption were amongst the most detailed ever given by a president. The circumstances in which he did so were, however, unique, but expect to see some kind of shuffling of the deck soon. By CARIEN DU PLESSIS.

Lists of possible cabinet changes were already doing the rounds as soon as former president Jacob Zuma resigned late on Wednesday night. In his maiden State of the Nation Address the day after his election, without spelling it out, Cyril Ramaphosa on Wednesday made it clear that this new broom was intending to sweep clean.

So rousing was his speech, that, by the end of it, the ANC stood up to sing his praises (even a number of those in the public gallery seats did), and the Economic Freedom Fighters (yes, they sat through the whole speech, stayed awake, and didn’t disrupt it once) were the ones that remained behind, singing, with some changed lyrics: “Ramaphosa, it is time to make those arrests.”

A cabinet reshuffle might be in the immediate offing for Ramaphosa to weed out those who are an impediment to what he wants to achieve in the short term. He indicated, however, that there will ultimately be more far-reaching changes, such as long-needed cuts to the cabinet structure after it had become bloated under former president Jacob Zuma.

“Growth, development and transformation depend on a strong and capable state,” he said. “It is critical that the structure and size of the state is optimally suited to meet the needs of the people and ensure the most efficient allocation of public resources.

“We will therefore initiate a process to review the configuration, number and size of national government departments.”

This was followed by loud cheers on both sides of the house, while EFF MPs, seizing every opportunity they could, made the soccer substitution signs at ministers in the opposite benches.

It’s not clear how long this task will take, but the reshuffle lists that have been doing the rounds still speak to the current structure. It should be added that lists like these can be misleading, and presidents are prone to keeping the real lists close to their chests.

First to go could be minister of social development, Bathabile Dlamini, who had been missing in action in the past few days, and who was conspicuously absent from the opening of Parliament. Whatever her reasons, this doesn’t exactly show her playing nicely for the unity cause.

Ramaphosa addressed the troubles she caused in social grants directly, using the personal pronoun (cabinet appointments are, after all, up to him):

“I want to personally allay fears of any disruption to the efficient delivery of this critical service [due to court action], and will take action to ensure no person in government is undermining implementation deadlines set by the court.”

Some of the parliamentarians’ loudest cheers were reserved for this bit – Dlamini hasn’t exactly been doing proud work.

The lists that have been doing the rounds have former African Union Chairperson and the also-ran for ANC president last year, Nkosazana Dlamini Zuma, as the new social development minster.

Unlike under Zuma, Dlamini is now dispensable. She used to be important to Zuma for the role the ANC Women’s League, of which she is president, played in his campaign, but they opposed Ramaphosa’s election and were not key to his victory.

There is also the economic cluster. Ramaphosa has been seen in the company of former finance minister Trevor Manuel quite a few times in the past week – could it be that he is consulting about who would be a good fit?

Although there’s been word that a reshuffle could happen as soon as Sunday, more than one MP close to Ramaphosa said it’s likely that current finance minister Malusi Gigaba would be allowed to deliver his Budget Speech on Wednesday, whereafter the reshuffle would be announced.

“It would be too disruptive to do it on Sunday, before the debate (on the State of the Nation Address),” one MP said.

Gigaba himself was evasive. “The speech is already written,” he said with a smile as he emerged from the National Assembly chamber.

Ramaphosa will focus strongly on the economy, with a Presidential Economic Advisory Council in the offing to “assist us in crafting our economic policy”. No mention was, incidentally, made of the National Development Plan, which was crafted under Zuma.

Ramaphosa also said, without mentioning names, that the minister of finance would clarify “all aspects of the financing of the [free higher education] scheme” during his Budget Speech.

At this point Gigaba, who had been fiddling with his hands throughout the speech because the tablet on which he played Candy Crush the day before was charging elsewhere, grinned nervously and a little unsure.

Previously there was talk of replacing Gigaba with former KwaZulu-Natal premier and another presidential contender, Zweli Mkhize, but some are now saying Mkhize destined to play another role, possibly related to the economy

Public enterprises minister Lynne Brown – who, like Gigaba, has been associated with the Gupta family – is another who is said to be fearing for her job, with her portfolio being at the centre of a shake-up of state-owned enterprises Ramaphosa has been promising since campaigning for his current position in the ANC.

In his Sona, Ramaphosa said, to loud applause:

“Government will take further measures to ensure that all state owned companies fulfil their economic and developmental mandates.”

He promised structural changes, and changes to the funding models, and said only experienced people would be appointed to the boards.

Then also a direct stab at corruption:

Former finance minister Pravin Gordhan’s name appears on one of the lists as someone who could take over this portfolio and shake up the state-owned enterprises. When he returned to the back benches of Parliament last year, he requested to be on the portfolio committee for public enterprises, and caused for a few stirs there.

Mining is another one that’s high on Ramaphosa’s list, and current mineral resources minister Mosebenzi Zwane could go – not least for the role he played in the Estina dairy project when he was an MEC in the Free State currently under investigation by the Hawks.

“We need to see mining as a sunrise industry, rather than as a sunset industry,” Ramaphosa said. Ramaphosa promised more engagements with stakeholders on the Mining Charter “to ensure that it is truly an effective instrument to sustainably transform the face of mining in South Africa”.

There has been criticism against the current process for a lack of sufficient debate around the topic.

It’s unclear who exactly would replace Zwane if he were to go, but the name of former Western Cape premier, Ebrahim Rasool, is down on one of the lists for this.

Ramaphosa also talked about turning “the tide of corruption” in the public service, and strengthening criminal justice systems to deal with corruption (at this point the EFF mockingly called out ANC secretary general and Free State Premier Ace Magashule’s name, even as he turned and smiled and then shifted uncomfortably in his seat in one of the front benches – he’s also been implicated in the Estina dairy project case). There’s also the commission of inquiry into state capture which is due to start its work soon.

It’s likely that there could be some shake-ups in the criminal justice cluster too (Jeff Radebe was mentioned as police minister and Bheki Cele as state security minister), although it’s not certain how much this cluster would be affected by an immediate cabinet reshuffle.

Asked afterwards whether he thought Ramaphosa could pull off his promises, one of the MPs said Ramaphosa took personal responsibility for a number of things, and would therefore ensure that it happened.

He said: “It is easier said than done, but it has to be said to be done.”

And Ramaphosa said it. DM