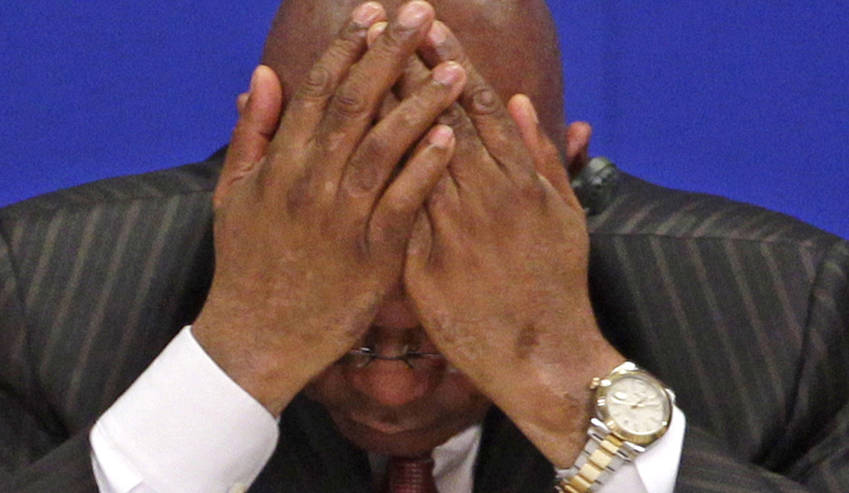 After a second stint in the presidency office, Zuma is out in the cold again. By XOLANI MAMKELI.

On 14 June 2005 Jacob Zuma was sacked as deputy president by then-president Thabo Mbeki. Mbeki made the announcement during the joint sitting of the two houses of Parliament, almost two weeks after Zuma was implicated in corruption during the Durban High Court trial of his former financial adviser, Schabir Shaik.

Mbeki argued that: “It seems self-evident that, arising out of the judgment in the Durban trial, there will be continuing legal processes in the higher courts. These processes will have a bearing on normal inquiries that the enforcement agencies may wish to undertake and on follow-up Parliament may embark on, in relation to any of its members. The executive will therefore await the outcomes of these processes. Both the deputy president and I are acutely sensitive to the responsibilities we bear as prescribed by our Constitution… However, as president of the republic I have come to the conclusion that [for] the deputy president, the government, our young democratic system and our country, it would be best to release the Honourable Jacob Zuma from his responsibilities as deputy president of the republic and member of the Cabinet.”

The case against Zuma is hitherto still pending, and before the end of February the National Prosecuting Authority has promised that the verdict of whether to prosecute Zuma or not will be made. The 218 witnesses have been found and are willing to come forward to testify. Signs are therefore ominous.

On Tuesday 12 February 2018 the ANC National Executive Committee took a unanimous decision to recall Zuma from his responsibilities as the deployee of the ANC in government and, to an extension, the Cabinet. Lightning has struck Zuma twice in the presidency, contrary to the idiom that it does not strike twice in the same place. Zuma’s presidency had all the odoriferous trappings of a morally bereft, corrupt and calamitous epoch visited on South Africa. The man was a kleptocrat. He sold the country to the three men from India. The infamous leaked Gupta e-mails are evidence enough to deduce the veracity of malfeasance under the watch of Zuma. In one of his seminal writings, Zuma: A Biography, Jeremy Gordin argues that Zuma has been a taker his entire life; he has not been a person who gives.

This man was a sexual predator who carried out his antics on someone who called him uncle. This was revealed during the trial in which he was accused of having raped Fezekile Kuzwayo – known then as Khwezi.

It is politicians like Zuma who give politicians a bad name. In his conjecture, Mark Twain could have had Zuma in mind when he said: “Politicians and diapers must be changed often, and for the same reason.”

Jean-Francois Bayart puts it very aptly but crudely in The State in Africa: The Politics of the Belly. He argues that in Africa there is a reciprocal elite assimilation that involves aspects of kinship and nepotism. Kin ethnic and family connections have always been an aspect of African politics, and what a Westerner might call nepotism or favouritism is merely part of the African political experience.

In one of Zuma’s many scandalous manoeuvres, one minister – Des van Rooyen – was a minister for a weekend. This act alone plunged the economy into apocalyptic proportions. In Zuma’s nine years of governance the country was downgraded twice by the rating agencies. It was a cesspool of leadership and administrative chaos. Post-democracy there had never been a president who had nine motions of no confidence in Parliament – surely a record of dubious distinction. He deserves to be written about in the Guinness Books of Records. DM

Xolani Mamkeli is a researcher at the Mpumalanga provincial legislature and a political science PhD student at the University of Johannesburg. He writes in his personal capacity.