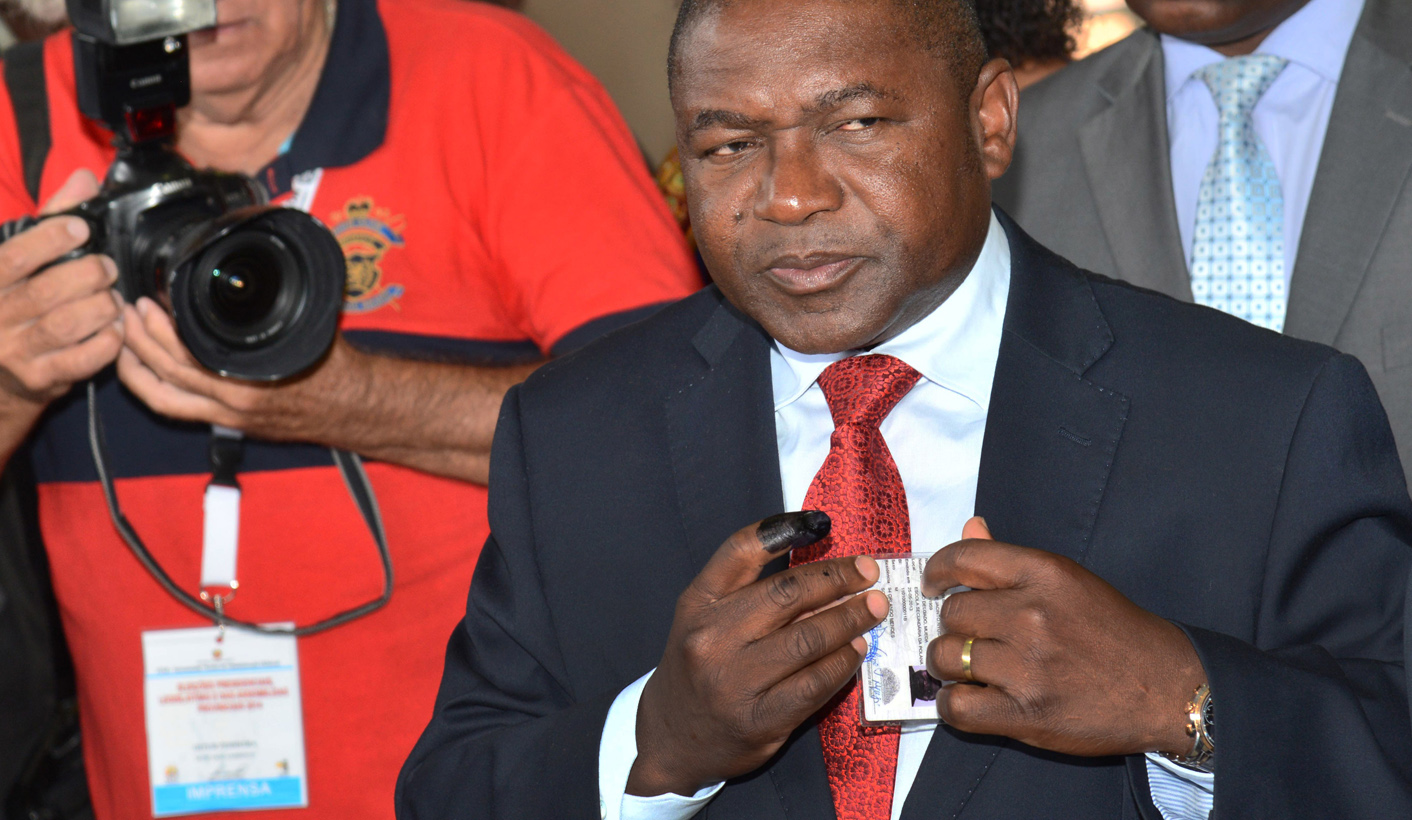 Will the new Frelimo-Renamo “decentralisation” deal really devolve more power to the people? By PETER FABRICIUS for ISS Today.

“Frenamo partocracy”. This is the buzz phrase in Mozambique’s political circles, conceived by sceptical wags to describe the latest “decentralisation” deal cooked up between the ruling Mozambique Liberation Front (Frelimo) and the main opposition party, the Mozambican National Resistance (Renamo). The deal was announced by President Filipe Nyusi last week.

The newly minted phrase expresses a suspicion among many ordinary Mozambicans that the agreement, negotiated in secret, is more of a cynical carve-up of power between Nyusi and Renamo leader Afonso Dhlakama than a genuine decentralisation of power to the people.

Dhlakama has long demanded greater autonomy for provincial governments as Renamo commands majority support in two of the country’s 11 provinces (Zambezia and Sofala); a plurality in three more (Nampula, Tete and Manic), and in a sixth province, Niassa, Frelimo has a plurality but not a majority. This means that in coalition with smaller parties, Renamo could theoretically control more than half the country’s provinces.

Frelimo, historically highly centrist, has resisted Dhlakama’s demands for decades, insisting on the right to appoint provincial governors itself. It did, however, introduce elected but largely powerless provincial assemblies in 2009.

The disagreement over the power to appoint governors – who wield considerable patronage – has been one of the main causes of the conflict that has regularly erupted. Dhlakama has returned to the bush to resume the civil war that formally ended in 1992 whenever he has been thwarted at the negotiation table.

Negotiations for greater decentralisation gained momentum after the more flexible Nyusi succeeded the hardline Armando Guebuza as president in 2015. Earlier proposals by Renamo were rejected but the current one was agreed to last week and legislation to change the constitution and put it into effect was submitted to Parliament this week.

In essence the new deal devolves the power to appoint provincial governors to whichever party wins most votes in the provincial assemblies. This satisfies Dhlakama’s main demand, since it in effect means he will win the power to choose the governors in three or four of Mozambique’s 11 provinces. The governors will have control over fairly narrowly defined areas of government, but the patronage opportunities are quite large, because they have authority to allocate land.

The most contentious aspect of the new arrangement, though, is that it abolishes the current system of direct election of mayors in those 53 municipalities. Henceforth mayors, district and provincial presidents or governors will all be indirectly elected by their respective assemblies.

The new deal has prompted varying reactions, no doubt because it seems to represent a step forward for decentralisation in some ways, but a step back in others. The net effect is hard to assess but seems to be mostly negative.

So, in those provinces where Renamo or Frelimo might be obliged to form coalitions with smaller parties like the Democratic Movement of Mozambique (MDM) to attain a majority, the bigger parties will still retain the power to appoint the governors on their own.

And the agreement between Nyusi and Dhlakama to abolish the direct election of mayors is unambiguously a setback for decentralisation and democracy. The changes at both local and provincial level both give undue power to the party leadership rather than to elected representatives – and thereby deprive the people of their democratic rights.

Joseph Hanlon, editor of the Mozambique Political Process Bulletin and senior lecturer at Britain’s Open University, also believes that depriving municipal assemblies of the power to elect the mayor faces a serious constitutional hurdle. He says Frelimo and Renamo believe the changes will only require a constitutional amendment which could be approved by parliament. But lawyers contest this, saying that any constitutional amendment abolishing direct election of office-bearers must be put to a referendum.

Hanlon points out that Mozambique has never held a referendum and would have to enact legislation to do so. All in all, a referendum would probably only take place at the same time as the October 2019 national elections, which is after mayors are elected in local government polls in October this year. That means mayors would have to be directly elected again this year, despite Nyusi and Dhlakama’s intention that the new deal kick in before the municipal elections.

But the imperious Dhlakama is apparently in no way intimidated by such constitutional trivia. Hanlon says the online journal O País quoted Dhlakama as saying that his agreement with Nyusi effectively overrides the constitution.

“I do not see the force majeure for a referendum,” Dhlakama is quoted as saying. “It was a negotiation between the government and the opposition, in this case Renamo. The lawyers are right as jurists, but they have no reason to talk about a referendum, it has nothing to do with this.”

There you see Frenamo partocracy at its most naked. Other analysts agree with Hanlon, though. Seasoned journalist and commentator Fernando Lima, editor of the journal Sahara, dismisses this as a storm in a teacup and believes a referendum can and will be held to change the constitution in time for this year’s local government elections.

“Of course it is disappointing to have this formula of indirect election but clearly this is a step forward in terms of decentralisation,” Lima told ISS Today. He also believes the new dispensation will increase the power of smaller parties – particularly the third-largest MDM – because they could play kingmaking roles in several provinces where neither Frelimo nor Renamo command majorities.

Despite reservations, Hanlon is also quite positive, believing the Nyusi-Dhlakama deal will breathe new life into the provincial assemblies which have theoretical powers to approve or reject provincial plans and budgets but are currently quite moribund, for lack of money and resources.

But another veteran journalist and expert on Mozambique politics is extremely dismissive. “This isn’t genuine decentralisation. It’s a concentration of power in the hands of party machines. It’s already causing considerable outrage, even among Frelimo loyalists, so maybe the parliamentary debates – probably in March – will change the text of the constitutional amendments.”

In the past Frelimo has rejected decentralisation deals struck by Nyusi with Dhlakama, but observers are confident this one will go through – though perhaps with amendments, as suggested above.

Ultimately though this deal is not as much about constitutionalism, decentralisation or democracy as it is about peace. Dhlakama always negotiates with a half-cocked gun to Frelimo’s head, threatening a return to civil war if he doesn’t get his way. Many hardliners in Frelimo would like to respond by giving him the Savimbi treatment, to bump him off, and they seem to have tried to do so once or twice already.

Nyusi prefers to negotiate. He knows that Renamo’s skirmishes don’t present an existential threat to the Frelimo government. But they are a serious nuisance, discouraging investment at a time when the cash-strapped government desperately needs a large infusion of capital.

Some may call it another important step along the path of gradual decentralisation and democratisation, some may call it simply blackmail – but Frenamo partocracy at least seems to be keeping the country (relatively) stable. DM