A civil engineer’s view: What Cape Town could do with its stormwater 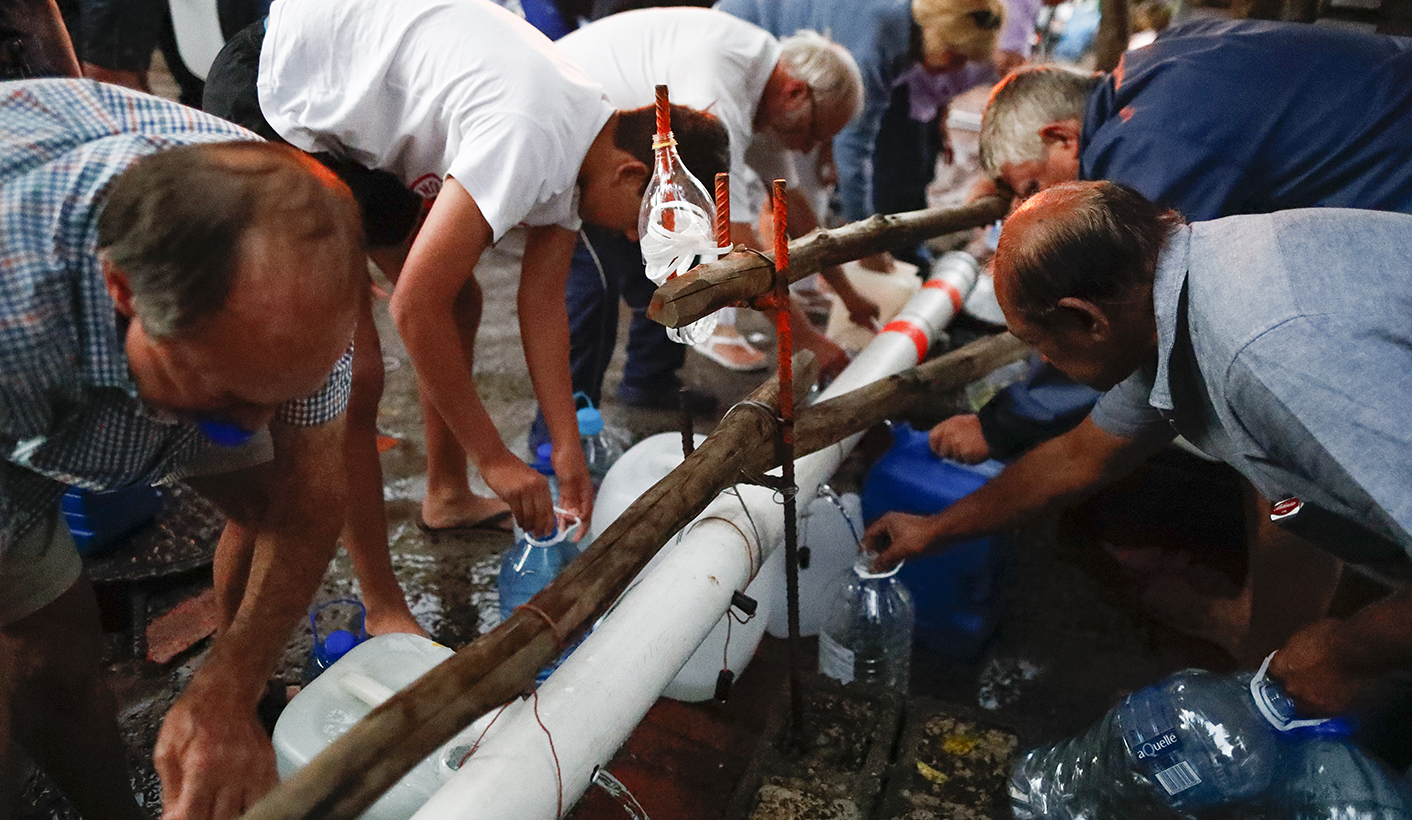 Cape Town gets more rain than it can use – but at the moment it doesn’t have capacity to clean or store all this water. Late in 2017, a UCT researcher said using treated stormwater to recharge the Cape Flats Aquifer – “if we can get it right” – could potentially relieve the city of the need to supply 33-million kilolitres of potable water per year. But can they get it right? MARELISE VAN DER MERWE spoke to John Okedi, a civil engineer applying his mind to the stormwater problem.

Cape Town uses about 300-million cubic metres of water per year, and on average, around four times that falls on the city each year as rain. Less than 75% of normal rainfall is considered a severe meteorological drought, meaning even under drought conditions, Cape Town’s skies are generous.

Yet although the City of Cape Town has embarked on a stormwater campaign as part of its drive to save resources, public attention has been focused on desalination and groundwater abstraction as water augmentation options.

At the moment, much of the stormwater that falls on Cape Town is managed via a network of ponds and channels that divert it first into rivers and ultimately into the sea. In the end, it goes unused.

This is a similar system to many parts of the world. But cities like Melbourne have researched the cost of stormwater harvesting, finding it can be a cost-effective part of water augmentation.

Turns out there are a couple of potential solutions, and civil engineer and UCT PhD candidate John Okedi has been looking for answers. Daily Maverick spoke to him about his work.

DM: Your research has been focused on trying to solve stormwater storage. Can you give an outline of your work?

JO: I’m looking at stormwater as a water resource. There are other resources like building dams in Cape Town, or you can recycle waste water or use sea water. stormwater is one of these opportunities.

How much stormwater is available?

In rainfall, we get about four times what the demand is.

How about during a drought period?

Cape Town typically gets over 500mm of rain per year. If you compute that with the area that you have, of around 2,400 square km, you’d have a value of 1,200m cubic metres per year. Some years are higher, some lower (and some parts of Cape Town are higher or lower – Ed). It is difficult to predict from an average. But always the difficulty of harvesting it is storage.

It appears stormwater harvesting is quite low on the list of favoured options. Is this primarily due to the storage problem?

It is two things. Mostly it is the water quality itself. In an urban area the water falls on the roads and collects trash and rubbish and impurities that are not yet known, so there are unknowns in the contamination.

Also, the drains go into rivers that are not really rivers. They are storm drains. The Lotus River and Black River water quality is really poor; more or less sewerage, as they drain informal settlements.

How costly is treatment?

There is also the issue of availability. Our highest demand for water is in the summer. We have outdoor demands like land stream irrigation. There is an imbalance between when the rain is available and when it is required. So you need to be able to preserve that water until when it is required.

One could look at stormwater for non-potable water uses because of the water quality issue. But if you do that, the mismatch becomes bigger between when water is available and when it is required, because you are not using that water all year to supply households or for other potable uses. The issue of storage was much bigger when I was only limiting my research to non-potable uses.

What are our storage options?

There was storage, actually. I started my research on the Cape Flats, along the Philippi Horticultural Area, along the airport and down to Muizenberg. There was storage there in terms of ground water, but we needed to use it smartly.

The water table is high as well. They have started harvesting the ground water. The smarter way to do this is you can pump out the groundwater put in storage, but then you need to replace it, otherwise you have the problem with the ground settling – the level going down. So there is storage in terms of storing the water underground.

I was also doing a study – there is large storage in Zeekoevlei, Rondevlei, and Rrincessvlei. So I looked at two approaches. The first was surface water, the other was underground. Wherever there was storage.

So a dual system, to use the aquifers and the lakes. You’ve also noted that there are around 800 ponds in Cape Town that are usually empty until needed for flood management – and that these might be a storage option.

The vleis are used for recreation as well: tourism and nature reserves. I didn’t want to take that away. If you use them strictly for water supply, you will take away the other activities that are occurring there at the moment. So what I was thinking was that you can do real time control.

There are several ponds in the area. My idea was to store the water upstream. So what we’d do with the Zeekoevlei, Rondevlei and Princessvlei was use one half for water supply and the other half for recreational activities like river boating or the nature reserve.

So wherever there is excess storage we can store it in the upstream and release it downstream when needed.

What’s the state of the ponds now?

There are several types of ponds. Detention ponds are largely empty depressions in the grounds, used to handle floods if there are floods.

Some are quite big, about a hectare; some are up to five hectares. The risk with these there is a risk of informal settlements invading these places.

But, of course, that will not work for what I am thinking, for bioretention cells which would have a treatment process. It would require a discussion around what would need to be done.

In places like Princessvlei and Philippi there has been research on bioremediation. What would be the relationship between bioremediation and this kind of water storage, beneficial or adverse?

Because I’m dealing with water quality that’s poor, I also checked the extent to which some water would impact the ground itself. One thing is that the water being extracted has a positive impact on the ground. So what I’m proposing is a bioretention cell. What that is, is compacting stormwater cells into cells that provide some level of treatment, so that whatever is there does not go, as is, into the ground. The research into bioretention cells is worldwide – it is not my original research.

In Australia and the US, where they are treating the stormwater before they inject it into the ground because it is a big risk, they would have a pre-treatment process.

I’m proposing something closer to what’s being done in Atlantis.

As a satellite city not far from Cape Town, a key question was water supply and sewage water. Their treatment works is essentially ponds – we call them recharge cells. They bring all their waste water close to the sea. The ponds must be close to the sea because the sewage must flow by gravity towards the sea. But instead of being deposited into the sea, it is deposited into these restricted cells and actually infiltrated into the ground. They mix the waste water with the stormwater in these recharge basins. It’s a technique through which they work and then abstract it. They essentially use the ground to take out impurities.

Broadly speaking, what kind of cost and time frame would one be looking at to get what you’re proposing off the ground? And has there been any interest at official levels?

Yes, my research is a Water Research Commission funded project – they are funding this project. Then there is the project structure. A reference group monitors or supervises your group. This group includes people from the City of Cape Town, provincial government officials, the City of Johannesburg, The City of Pretoria and Durban, and academics from the University of Stellenbosch and Pretoria (Okedi is a PhD candidate at the University of Cape Town). There are people supervising our work, looking at what we are doing.

But as yet, no indication of future uptake?

I have actually done similar research previously, but mainly for non-potable uses, which became expensive. The uptake was low, because especially like in Cape Town, before the drought, nobody was thinking about an alternative because there was easy water. Now there is a drought, everybody is thinking: “What else can we do?” Waste water recycling, sea water, ground water, rain water harvesting, these are all opportunities. We build what we call resilience.