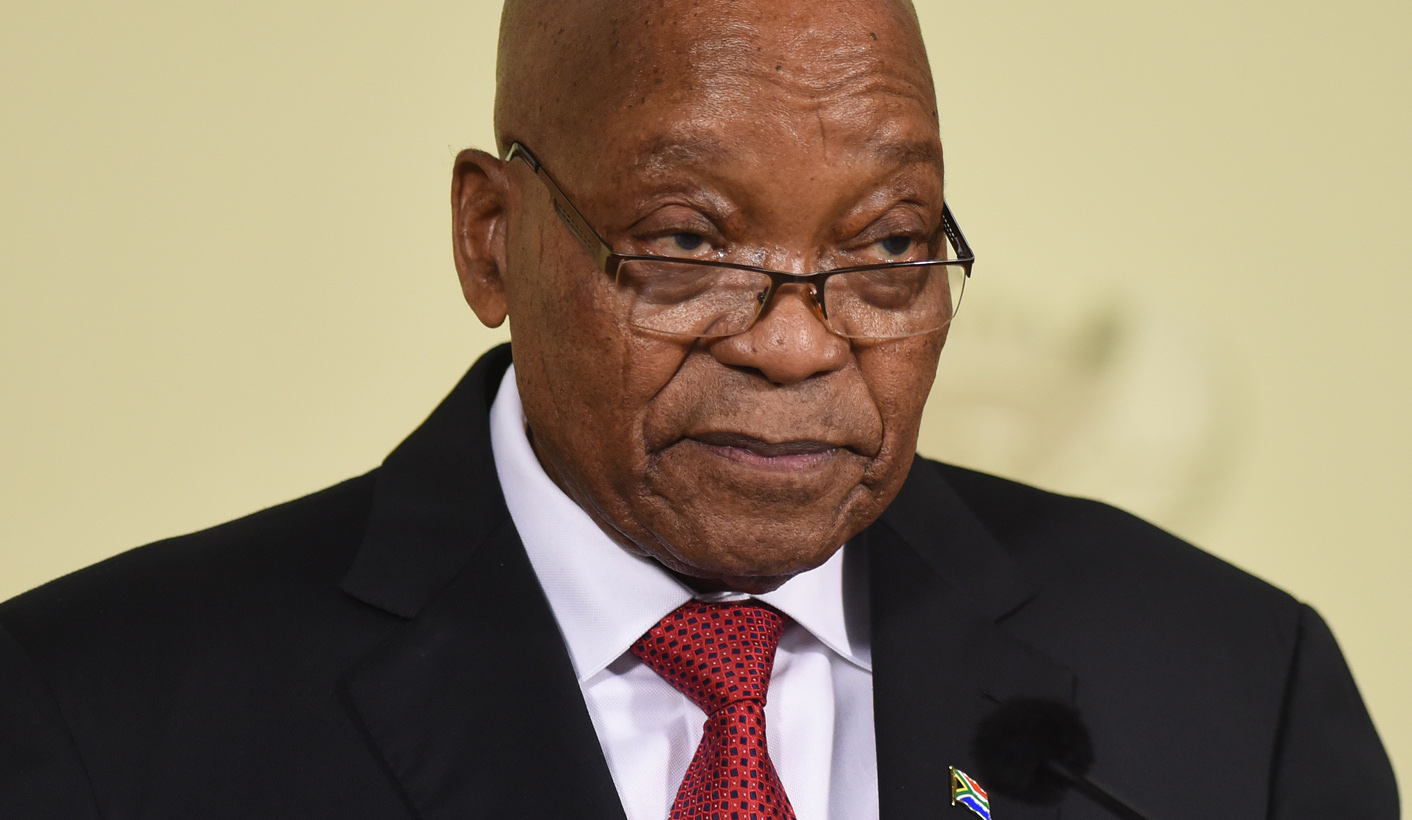 Jacob Zuma’s nine-year tenure as president of South Africa is over. In a speech televised live on Wednesday night, Zuma announced his resignation with immediate effect. But in true Msholozi style, even the verbal path to announcing his departure was far from straightforward. By REBECCA DAVIS.

The Jacob Zuma who appeared before the nation in a bizarre TV interview with the SABC on Wednesday afternoon was nowhere to be seen when another Jacob Zuma took to the podium at the Union Buildings, roughly seven hours later.

The Zuma we saw in the SABC interview was tense and angry, railing against the injustice of the ANC’s decision to recall him and reiterating his refusal to leave office.

The Zuma who addressed South Africa on Thursday night entered in a seemingly relaxed mood, even joking with journalists beforehand: “Why do you look so serious? You can’t even say good evening!”

Whatever happened in the intervening hours between the two appearances was clearly sufficient to change Zuma’s mind: to convince him that leaving office via a resignation, rather than by means of a humiliating parliamentary ejection, was the better course of action.

But still, that doesn’t mean that his resignation speech was straightforward. Indeed, for much of the address it seemed probable that Zuma was sticking to his guns and demanding that Parliament, rather than the ANC, axe him if they dared.

Zuma quoted the Constitution extensively in order to make the point that he served the people of South Africa rather than one political party.

“The door to which I came to serve the people of South Africa is the National Assembly,” he said. “This constitutional line between party and state is often forgotten in the usual business of party-political contestations.”

He subsequently seemed to be welcoming the prospect of a parliamentary mechanism to remove him.

“I fear no motion of no confidence or impeachment,” Zuma stated, “for they are the lawful mechanisms for the people of this country to remove their president.”

Utterances like this seemed to lay the ground for a reiteration that he would refuse to resign – as did his repetition of complaints against the ANC.

“I have only asked my party to articulate my transactions…” Zuma paused and corrected his unfortunate error. “Transgressions … and the reason for its immediate instruction that I vacate office.”

Zuma also repeated a point he had made earlier in the day in his SABC interview: that he felt he had reached an agreement with ANC president Cyril Ramaphosa and Secretary-General Ace Magashule as to the best way to handle the transition of power, only to be ultimately betrayed.

“Of course I must accept that if my party and my compatriots wish that I be removed from office, they must exercise that right and do so in the manner prescribed by the Constitution,” Zuma said.

And yet – somehow – these apparent prevarications led him to the point of announcing: “I … resign as president of the republic with immediate effect”.

In one last barb, Zuma added: “Even though I disagree with the decision of the leadership of my organisation.”

It is the element of defiance until the last moment for which Zuma’s speech will be remembered, rather than any graciousness or poignancy.

Early in his speech, he had thrown in a final racial truth-bomb, saying that he respected the ANC’s “gallant fight against centuries of white minority brutality, whose relics remain today and continue to be entrenched in all manner of sophisticated ways in order to ensure the continued survival of white privilege”.

Zuma also could not resist a last sprinkling of martyrdom. Expressing his hope that unity would prevail in the ANC, Zuma said: “No life should be lost in my name.”

He spoke at some length about the “perks” and “benefits” that former heads of state receive upon leaving office, in order to make the point that he had not allowed a fear of losing these privileges to influence his manner of leaving. It was unclear to what this referred: if Zuma had been impeached he would indeed have lost his post-office benefits, but a motion of no confidence would have allowed him to retain them.

There was not much on offer in his address in the way of summing up his presidential legacy, beyond an acknowledgement of his own imperfection.

“None of us, no matter how perfect, can claim that the building of a new society and the marshalling of a former liberation movement into a modern political party all happen in a straight line,” Zuma said.

Nonetheless: “I have served the people of South Africa to the best of my ability.”

Zuma concluded his speech with thanks to South Africans and government. Leaving the podium, he had a special parting message for journalists:

Virtually as Zuma finished speaking, ANC officials Pule Mabe and Jessie Duarte were ready to read a statement on behalf of the ANC.

Although Zuma’s last days in office have been characterised by unprecedented criticism from top-ranking members of his own party, there was no trace of this in the ANC’s response to his valedictory address.

It was hard not to detect a note of relief in the lines relating to the fact of Zuma’s resignation:

“In giving effect to the decision of the ANC National Executive Committee to recall him, President Zuma has reaffirmed his commitment to the principles, practices and character of the movement to which he has dedicated his life,” the ruling party stated.

“While we acknowledge errors and mistakes that were committed,” the ANC said, “President Zuma leaves a legacy of delivery in many critical areas.”

The party expressed gratitude to the “contribution he has made to progress in improving the lives of ordinary South Africans”.

Unlike Zuma’s speech, the message in the ANC statement was clear: it’s time for this period of publicly airing dirty laundry to end immediately. Zuma, it is now evident, will be treated by the ANC at least superficially with the respect due any outgoing leader.

South Africans, however, are unlikely to forget just how close things came to falling apart this last week. DM

Photo: South African President Jacob Zuma addresses the media during a national television address in which he resigned, Pretoria, South Africa, 14 February 2018. President Zuma has been under intense pressure to resign amidst ongoing corruption and State Capture allegations. EPA-EFE/STR