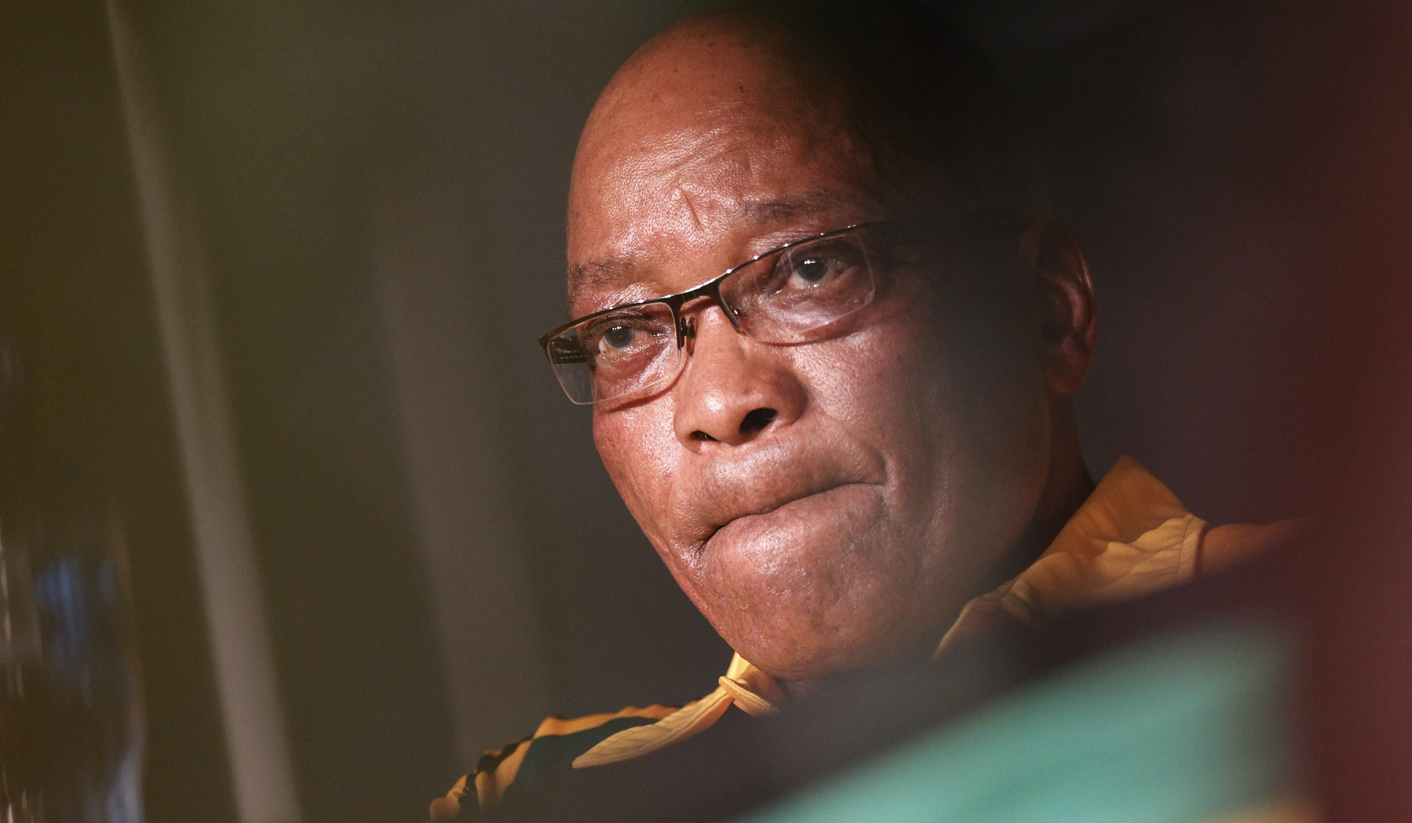 And so it came to pass that the process which started the moment Mr Jacob Zuma fired Nhlanhla Nene as Finance Minister on 9 December 2015 culminated in a speech that saw him fulminate and fume, and lie and distort the truth once more. And then, at the end of an angry and defiant presentation, he resigned as president, “with immediate effect”. Finally. Our long national nightmare is over. By STEPHEN GROOTES.

This nightmare took South Africans to the depths of our hopelessness and depression. It says so much about the evil of Jacob Zuma’s reign that so many South Africans are pleased that the man who was implicated by some in a massacre is now in charge of the country. But at the same time, Zuma’s time in office has given us one thing: It has kicked us out of bed, given us the strongest, and hardest, possible lesson in what happens when a political party becomes a personality cult.

Mr Zuma’s appearance on TV earlier in the day had been close to an expression of insanity. It was as if the man had slipped a circuit in his head, telling the SABC’s Mzwandile Mbeje in a rambling monologue that he simply didn’t understand what he had done wrong, and that the ANC had yet to tell him. This was him probing the ANC’s weak spot, the fact that, earlier in the week, Ace Magashule had claimed Zuma did nothing wrong. As Magashule was well aware, he was delivering his own political suicide note; it would probably be wise for him to have kept his own counsel.

For a moment, it was a completely different Zuma who came to the podium at around 22:40 on Wednesday night. He was jolly, asking the assembled journalists why “are you so serious”. It was a glimpse of the Zuma we have not seen in years, the man who could, when the mood took him, relate to almost anyone. But then he fell into his prepared speech. It was, like so many of Zuma’s past speeches, simply awful.

Zuma has got himself into the political position where many people disagree with what he is saying just because he is the person saying it. He started with the simple fact that the ANC’s national executive committee had decided to recall him. Considering that Zuma has so often beaten around the bush and refused to get to the point, it was almost refreshing.

Then he made the point that he had been nominated to the position of president by his party, the ANC. Suddenly, the joy and energy, the bounce, left him. He was like we have come to know him lately. Weighed down, not by his non-existent conscience, but by the weight of sudden reality bearing down on him. It must have been a lonely life being Mr Zuma since that December evening at Nasrec.

Then, being Zuma, it was time to turn to history, and how he respects the ANC, and its “gallant fight against centuries of white minority brutality”. And then the dig, the last stab at the people he has tried so hard to make enemies of, that their “relics remain today and continue to be entrenched in all manner of sophisticated ways in order to ensure the continued survival of white privilege”.

At this moment the revisionism started, the simple blatant lying.

“I have served in my capacity as the Republic’s president within the prism of our much acclaimed Constitution whose foundational values I fully subscribed to.”

Mr Zuma, we all know that you give two figs for the Constitution.

Then came the line that “this constitutional line between party and state is often forgotten”.

And of course, there was what looked like a serious dig at Cyril Ramaphosa, the man who is now the acting president:

“As we fight our own battles in the corridors of political power and sometimes serving the very interests of the oppressors of yesterday who joyfully celebrate as we lynch one another, we often forget the citizens on whose behalf we try to create a better life.”

Ja, there really is no love lost between him and Ramaphosa.

There was more to come. A line so comically funny given the context of Zuma’s time in power that it was amazing no one in the audience laughed:

“We tend to place the party above the supreme law of the country.”

No, Mr Zuma, not we, but you. Time and time again he has done this. It was his political power as leader of the ANC in 2009 that saw him being able to force the National Prosecuting Authority to withdraw the corruption charges against him. And so many of his actions since then have involved transgressing the Constitution. Read the Constitutional Court’s Nkandla judgment. Even they say so.

Zuma seemed to find it important that this speech – one of the most important of his career, a speech that could literally define how he is remembered – should include a long passage about perks and “post-office benefits”. It is death-defying that someone can be so self-obsessed to even mention it in a goodbye speech like this. Nobody cares, Mr Zuma. They’re just glad you’re gone. To spend so much time on this issue just reveals you for the selfish narcissist you are.

A little later, Zuma switched to Zulu. While there could be debates around this, and it is certainly his right to address the nation in whichever language he chooses, it was another sign of his divisive nature. It was on his watch, and for his benefit, that tribalism started to re-enter ANC politics. It was for him that people wore the “100% Zuluboy” shirts, that so many Zulu-speaking Cabinet ministers were appointed, that there are fears now in some quarters of what is being called “ethnic mobilisation”. It is true that every politician has a core constituency, and he was speaking to his. But it was revealing all the same.

But it was in English that he wanted to make clear that “I fear no motion of no-confidence or impeachment. For they are the lawful mechanisms of the people of this country to remove their president”.

This simply cannot be true. Otherwise he would have resigned the moment the NEC said it was recalling him. It was only when Jackson Mthembu and Paul Mashatile actually scheduled the motion of no confidence that he got the message. That was the key moment in the day’s events, it’s what pushed him over the edge.

However, Zuma had not yet delivered the biggest lie of the night:

“I have served the people to the best of my ability.”

Whatever. Mr Zuma, you have not served the people of South Africa. You have done nothing for the country you confess to love. You have taken South Africa backwards many years, sometimes deliberately.

Zuma’s years in office will be seen as a lost decade, a time no one really wants to talk about, a time when we lacked leadership, and the people with political power governed only to their own advantage. The Guptas, Waterkloof, Nkandla, the corruption charges, the complete abuse of the intelligence services, the control of the NPA, State Capture, the wounded and degraded economy. All of this revolved around Zuma. It was because of his intent and his desire to set up a parallel state that could benefit himself that we are in this particular moment. He has never answered questions about any of these things. And he has never explained what lies at the root of his defeat in December – his decision to fire Nhlanhla Nene.

Finally, after what seemed more like a tirade than a speech, came the line that we had, literally, all been waiting for. “I have come to the decision to resign with immediate effect.”

Champagne corks popped around the country. Sighs of relief were heard everywhere. It is over. Finally, awful in its execution, but it is done.

There will be many who wake up gloomy this morning, who will look at the economic numbers and our awful racialised inequality, and our poverty and our unemployment, and tell you that South Africans have nothing to celebrate. That in fact the problems are just going to get worse, that more political trouble lies ahead, that Ramaphosa is no hero, that the ANC is still corrupt.

They are wrong. South Africa should celebrate, because Jacob Zuma is an evil man who tried to turn us against each other simply so that he could become rich. And our divided, unequal, wonderfully diverse society has overthrown him. It is not just a victory for the ANC, it is for every South African citizen. The people of this country have been pushed to the absolute limit, and survived. New coalitions have been formed, the citizenry is awake, the politicians now have to work for the vote. It is going to be different now. There are problems ahead, sure, but there will be a will to solve them, not to make them worse.

The nightmare is over. It is morning in South Africa. Again. DM