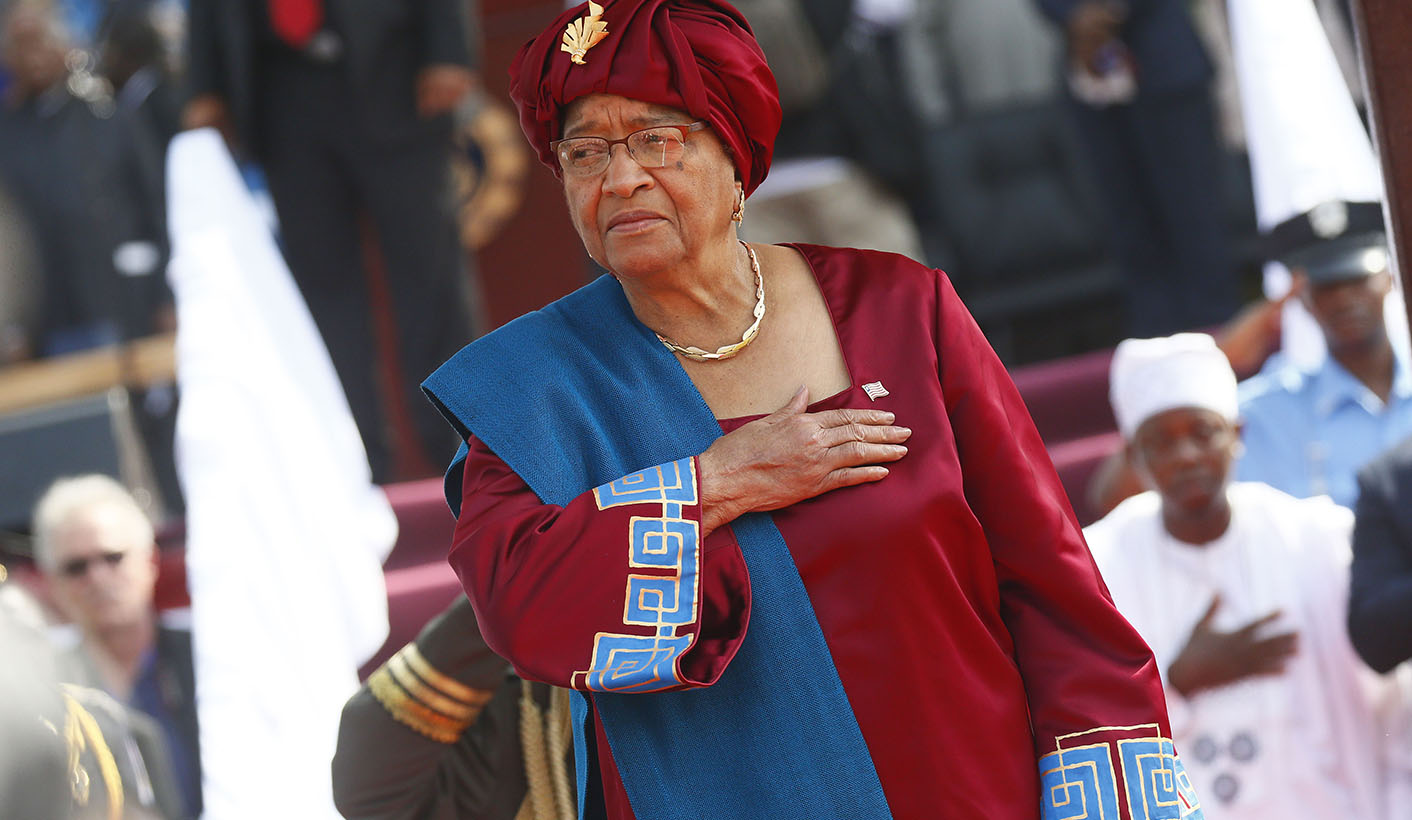 To the world, she’s a glowing leader, but Liberians may disagree that their former president was “exceptional”. By Simon Allison for ISS TODAY.

Finally, after a three-year drought, the Ibrahim Prize for Achievement in African Leadership has a winner: Ellen Johnson Sirleaf, Africa’s first-ever female head of state and, until recently, the president of Liberia.

“Ellen Johnson Sirleaf took the helm of Liberia when it was completely destroyed by civil war and led a process of reconciliation that focused on building a nation and its democratic institutions. Throughout her two terms in office, she worked tirelessly on behalf of the people of Liberia. Such a journey cannot be without some shortcomings and, today, Liberia continues to face many challenges.

“Nevertheless, during her 12 years in office, Ellen Johnson Sirleaf laid the foundations on which Liberia can now build,” said Salim Ahmed Salim, the former Tanzanian prime minister who is also chair of the Ibrahim Prize Committee.

The Ibrahim Prize is awarded to a former African executive head of state who left office in the past three years, was democratically elected, served his or her constitutionally mandated term and – most importantly – demonstrated exceptional leadership along the way. It has not been awarded since 2014, when Namibia’s Hifikepunye Pohamba received the commendation – an award described at the time as “debatable” by the Institute for Security Studies’ (ISS) Liesl Louw-Vaudran.

This is not the first major honour to be bestowed upon Johnson Sirleaf. In 2011 she was among three women awarded the Nobel Peace Prize for their role in the “non-violent struggle for the safety of women and for women’s rights to full participation in peace-building work”, according to the citation.

But Johnson Sirleaf’s Nobel Prize was not without its critics. Most notably, a year after the award, fellow 2011 prize winner Leymah Gbowee, a Liberian civil society activist, said she felt compelled to speak out against the president’s record in office. “You’re as bad as being an accomplice for things that are happening in the country if you don’t speak up,” she said.

Gbowee said Johnson Sirleaf’s government was rife with nepotism, with family and friends of the president pushed into senior positions. These included her son, Robert Sirleaf, who was then head of the state oil firm; and her stepson Fumba Sirleaf, who ran the National Security Agency. Gbowee also criticised the then president’s record on poverty reduction, arguing that the gap between rich and poor had increased on Johnson Sirleaf’s watch.

Gbowee is not the only Liberian to question Johnson Sirleaf’s leadership credentials. In fact, so contentious is her legacy that even her allies were wary of accepting her endorsement in last year’s presidential election, for fear that it might harm their chances.

As Foreign Policy reported: “So disliked is she that on the eve of Liberia’s 10 October general election, her own vice-president, Joseph Boakai – who is vying with 19 other candidates to succeed her – has tried to distance himself from Sirleaf on the campaign trail. ‘If you park a race car in the garage for 12 years, it gets rusty,’ Boakai said at a recent presidential debate.”

Not that it helped Boakai: long-time opposition leader George Weah won the election, and has now taken over as president.

Johnson Sirleaf assumed power in Liberia in 2006, in the aftermath of a long and bloody civil war. This background has come to define her presidency. In the eyes of many, especially the international community, the mere fact that she was able to prevent a return to conflict is enough of an achievement. But her critics are not so sure that this is enough to warrant the adulation she receives from the international community – of which the Ibrahim Prize, with its promise to reward only ‘exceptional leadership’, is the latest symptom.

“Her legacy is marked by shades of grey,” said Fonteh Akum, a senior researcher at the ISS. “Obviously the baseline expectation with electing a post-war president is to prevent a relapse into conflict. With the help of the international community, and especially the United Nations troops deployed in Liberia for almost the duration of her tenure, she did what she was expected to do. But an exceptional leader would have done more.”

Akum highlights several flaws in her government – for one, the failure to sustain significant economic growth, which now hovers at less than 3%, although this was complicated by sluggish global commodity prices and the Ebola outbreak. He also lists the endemic nepotism and corruption that characterised her administration, as well as her reluctance to decentralise government functions, concentrating power in the presidency.

Ebola in particular challenged her governance credentials: although she deserves credit for ultimately defeating the epidemic, it was Liberia’s poor health system that allowed it to flourish.

It is also worth remembering that in 2009, Liberia’s Truth and Reconciliation Commission – established to examine abuses committed during the civil war – recommended that Johnson Sirleaf be banned from politics for her early support of former president Charles Taylor. Taylor was subsequently convicted of war crimes by an international tribunal.

It is these issues that have defined her legacy in Liberia itself, argues Akum – in contrast to her glowing reputation outside the country. “There is a stark difference between how Ellen Johnson Sirleaf is perceived by Liberians and by the international community. The international community has a way in which they uphold her, as Africa’s first female president, who led the country out of civil war. But when you talk to Liberians, they are a lot more critical and expected a lot more from her.”

Not that Johnson Sirleaf’s legacy is necessarily set in stone. The Ibrahim Prize comes with a cash bonus in excess of $5-million. This gives the former president the financial freedom to determine the shape and nature of her post-presidency contribution. How she conducts herself now that she’s out of the political spotlight may ultimately say more about her leadership and values than her two terms in office.

Johnson Sirleaf may not be quite as “exceptional” as the award of the prestigious Ibrahim Prize may suggest. But it’s not too late for her to try. DM

Disclaimer: Simon Allison worked as Communications Officer for the Mo Ibrahim Foundation from 2009-2011