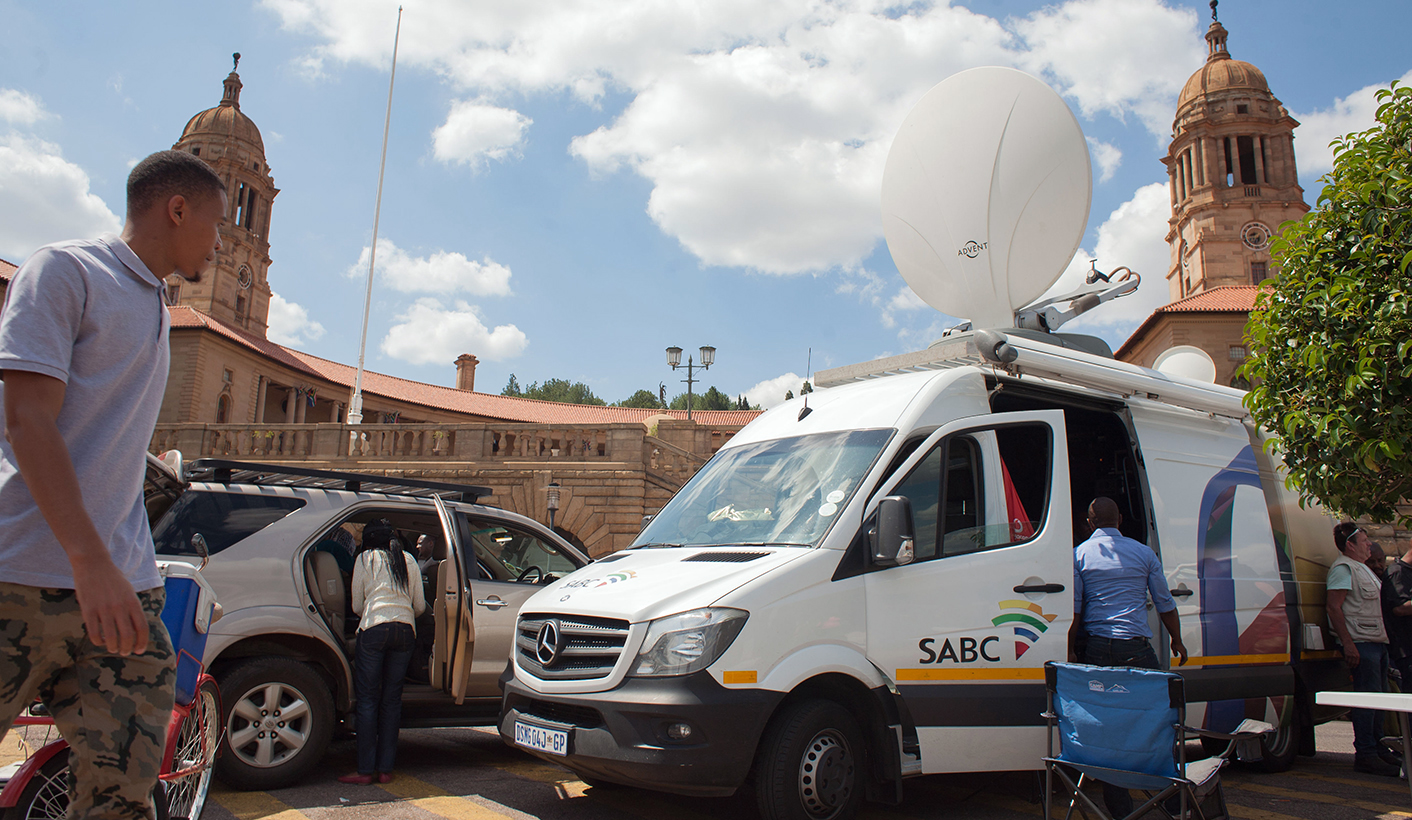 No one knew what President Jacob Zuma might say at the Union Buildings on Wednesday. Turns out he said nothing, opting instead to deliver a defiant “interview” from his home. By GREG NICOLSON.

Tourists snapped photos of the lawns at the Union Buildings on Wednesday, which quietly belied the protests seen in recent years. There were no mineworkers demanding a living wage and the grass has grown since tens of thousands of students calling for free education marched in 2015. Then there were the #AntiCorruption and #ZumaMustFall marches. Each demonstration made demands of the president, or called for his resignation.

Between those lawns and the Union Buildings that tower over Pretoria, there were always barriers, symbolic of the gap between Zuma and those he pledged to serve: a fence; police; sometimes barbed wire; teargas and rubber bullets.

Zuma’s survival has depended on those symbols of power and his vast powers of appointment. But on Wednesday, as the media waited for a briefing that was informally scheduled and then formally placed in purgatory, workers cleaned the grounds and tourists looked at tables of curios. The president was nowhere to be seen.

His term is about to be taken away from him and the seat of the executive no longer felt synonymous with Zuma. He was just a tenant in the last days of his lease. He had lost control of his desperate and disastrous political life. The breeze carried a question mark.

Police at the Union Buildings had been told to prepare for a media briefing at 10:00 on Wednesday, but Zuma’s spokesperson did not confirm the briefing as events were outpacing his boss’s control. The party had recalled Zuma, announced ANC secretary-general Ace Magashule on Tuesday. On Wednesday morning, the Hawks raided the Gupta family’s compound; they are intricately linked to allegations of “corruption” against the president.

As the day dragged on, with journalists delivering morning, then lunch, then afternoon updates with no word on whether Zuma would arrive, the ANC pulled a master move. Under party president Cyril Ramaphosa’s new leadership, it spoke to the EFF and decided it would support, perhaps with an amendment, the motion of no confidence in Zuma on Thursday.

Journalists debated whether Zuma would want to face the media while he was against the ropes. “Be careful,” a colleague said. “My laptop was just stolen out of my car. They smashed the window, right below the office of the president.” Some things never change.

A tweet said an SABC team had entered Zuma’s official residence. Everyone contacted their editors. Expletive followed expletive. Even the SABC outdoor broadcast van didn’t have the live TV feed.

“It’s live!” someone yelled. Missing the introduction, those at the Union Buildings were the last to know. Zuma’s voice echoed from car radios across the grounds.

The president was spectacularly consistent with how he’s led the country for nine years. It was defiant, defensive, delusional, self-absorbed, deceitful, contradictory, arrogant and sometimes quasi-threatening in his “fuck you” to Ramaphosa’s ANC and the nation.

“What is it that I’ve done?” Zuma asked. If the ANC officials hadn’t yet told him, the 50 journalists waiting at the Union Buildings could have made a few suggestions (apparently the SABC journalist listening to his monologue didn’t get a chance).

The president has made a career out of victimhood. He rose to power playing the victim under Thabo Mbeki and has always had a conspiracy theory in his pocket when he’s been under threat. This time was no different. After claiming he’s never done anything wrong, Zuma said he was being treated unfairly as Ramaphosa had reneged on a deal for the leadership transition to be implemented over months. “This is being done in a manner that I feel victimised,” he said.

He was elected ANC president as a man of the people, but on Wednesday his voice floated through the ground of the Union Buildings towards the statue of former president Nelson Mandela.

After Zuma’s speech, journalists filed stories and the tourists still wandered about. But the Union Buildings felt as empty as Zuma’s response to the thousands of protesters who have demanded change during his term. DM

Photo: The media camped outside the Union Buildings on Wednesday, waiting for President Jacob Zuma to hold a press briefing that never happened. Photo: Greg Nicolson