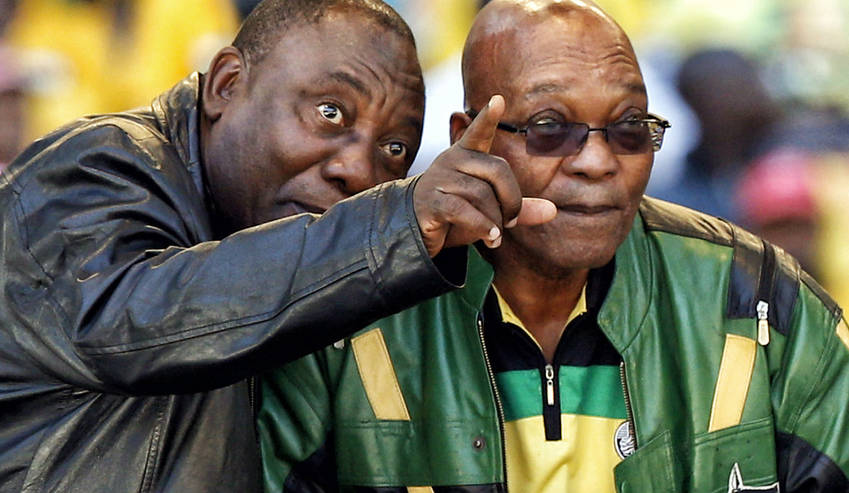 President Jacob Zuma had agreed to step down after meeting ANC president Cyril Ramaphosa on Sunday night, only to back-track on Monday, demanding that the NEC write him a letter that he will personally respond to. Meanwhile it is believed that the ANC will call for its own motion of no confidence in the President and will ask opposition parties to support this. Over and above this, the ANC hopes to invoke its own constitution to recall the President. By MARIANNE THAMM.

While ANC president Cyril Ramaphosa and secretary general Ace Magashule were meeting with President Jacob Zuma on Monday night, two-thirds of NEC members at the special meeting called on Zuma to go.

According to an insider, former ANC spokesperson Zizi Kodwa likened the moment to Zanu-PF’s removal of President Robert Mugabe in November and pleaded with the party not to “lose it” and to read the mood of the South African people.

Of the 80 NEC members, 64 spoke and two-thirds unanimously wanted the President to step down. Those who argued in support of Zuma were Thandi Mahambehlala, Nkosazana Dlamini Zuma and Bongani Bongo with Dlamini Zuma pleading passionately for unity, for the party not to fight and not be confrontational with Zuma. Nathi Nhleko questioned the timing of the recall.
Zuma had, according to the insider, after his marathon meeting with Ramaphosa on Sunday agreed to step down.

On Monday however Zuma had intimated that he wanted more time, at least three months, to bid farewell to the African Union and BRICS and to introduce the new president.

Kodwa did not mince his words saying the party had to stop protecting Zuma, that he had shown the party “the middle finger” and that he was ill-disciplined. He condemned the President’s actions as “self-serving” and said that the party should not “bend over backwards” to appease him. It was in this context that Kodwa spoke of the Zanu-PF moment facing the ANC.

Derek Hanekom reportedly said that Zuma’s refusal to leave office could be regarded as counter-revolutionary.

After meeting with Zuma at his home on Monday night Magashule reported back to the NEC telling members that Zuma had denied a discussion with Speaker Baleka Mbete that he would resign mid-February. The President also demanded that the party write him a letter to which he would respond personally.

Meanwhile Daily Maverick understands that the party has consulted lawyers with regard to section 12.1.1 of the ANC’s constitution which relates to the rule that the NEC may recall any deployee.

Apart from this, there will be an approach to the ANC’s Chief Whip Jackson Mthembu for the acceptance and the agreement on a motion of no confidence instituted by the ANC. There will be an attempt to get opposition parties, including the EFF, to agree to this. DM