Op-Ed: The SA mining industry can do much more than merely survive 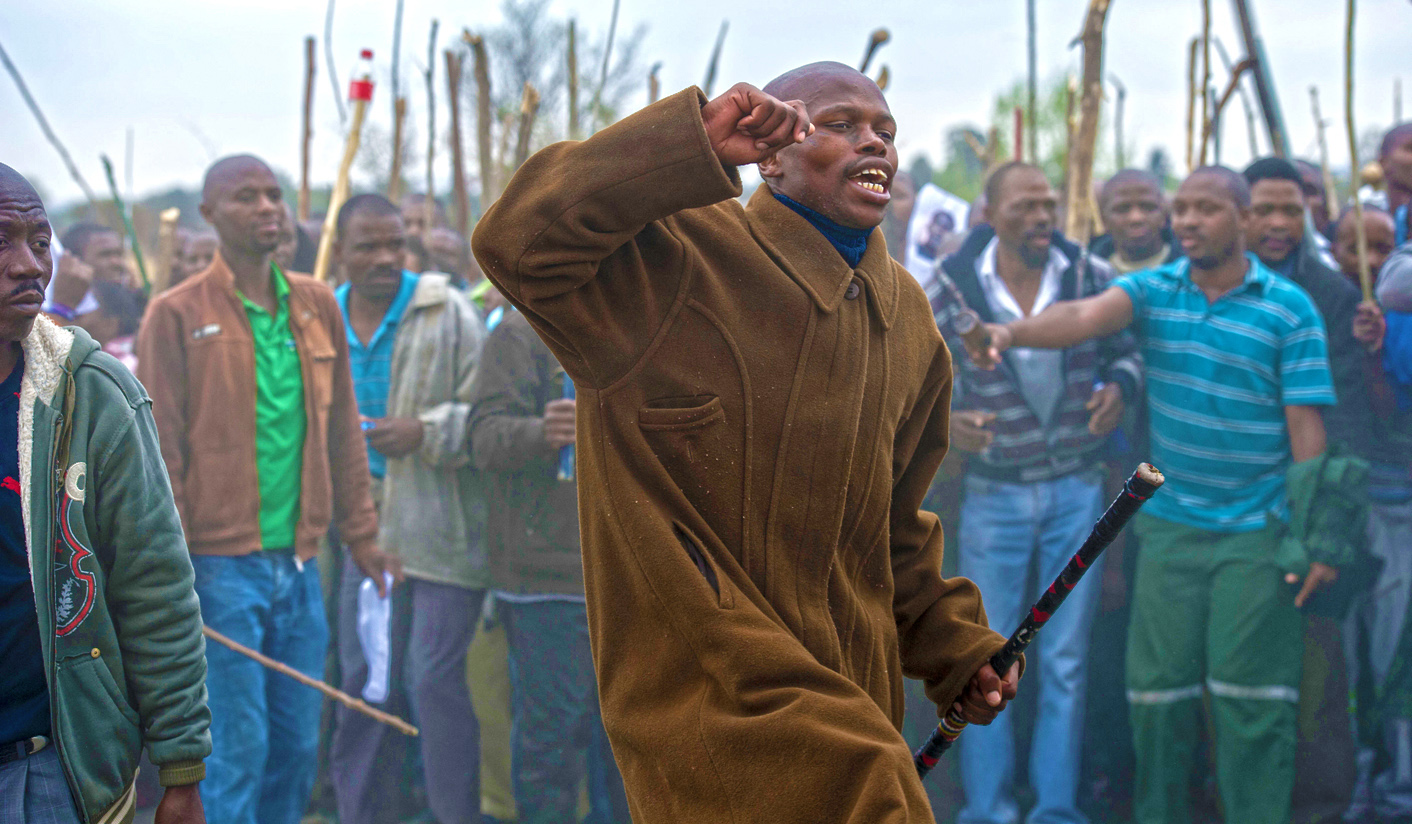 On the strength of his pro-investment approach, Cyril Ramaphosa’s elevation is being viewed with hope – and it comes at a propitious time. By MICHAEL MORRIS.

Of all the country’s politicians, one stands out as having probably the most intimate knowledge of mining, a vital sector of the South African economy, but one that continues to endure damaging political hostility.

Cyril Ramaphosa is that man, and many – in mining and beyond – are pinning their hopes on him.

As Institute of Race Relations policy fellow John Kane-Berman writes in the IRR’s latest @Liberty report, Mining and People: The Impact of Mining on the South African Economy and Living Standards, Ramaphosa not only “cut his teeth as a trade unionist” in the industry but is today a critical figure for a sector desperately in need of an ally.

Cautiously optimistic sentiments emerging from the 24th annual Mining Indaba in Cape Town this week reflect the hope that, at last, this foundational industry of South Africa’s international economic standing will find a partner, not an opponent, in government.

Mining, Kane-Berman says, is “well positioned for a new lease of life” – but “without an absolutely fundamental improvement in the policy environment … mining will continue its slow decline, attracting substantially less investment than the country’s resources and technical expertise warrant”.

Mining and People: The Impact of Mining on the South African Economy and Living Standards is a comprehensive survey of the sector’s critical role in the economy and in the lives of people, both in mining communities and far beyond them.

It covers the key political, social, technical, and economic factors affecting the industry, including continuing challenges in the environmental and health and safety spheres, and the implications of illegal mining. The report examines mining’s complex and important history, as well as its role in South Africa today. But its primary focus is on the future.

Mining, as a snapshot summary in the report puts it, “has helped to shape South Africa to a greater extent than any other industry”.

“It turned a largely pastoral economy into an industrial one. It led to the establishment of Kimberley and Johannesburg and other towns. It attracted vast quantities of foreign capital. It necessitated the establishment of stock markets, universities, and other modern institutions. It required the development of very high levels of skill to exploit thin seams of gold up to four kilometres (nearly two and a half miles) below the surface of the earth. It helped to shape the country’s labour markets. It drew huge numbers of South Africans from subsistence economies into paid employment. It attracted hundreds of thousands of workers from neighbouring states into employment in South Africa. But it also left a legacy which includes disease, environmental damage, and political hostility.”

From the complex amalgam of the past, at once formative and inescapable, the report looks ahead to the future prospects of an industry that dominates four of the country’s nine provinces and several large towns, that spends almost as much on buying goods and services from other sectors as it generates in its own output, earns billions in exports and pays billions in tax.

Under the right conditions, the report argues, this economic contribution would be greater.

Allowing mining to decline further, it warns, would be to misappreciate the sector’s considerable contribution.

The breadth of this impact is reflected in the fact that, though the number of people employed in mining has declined from 832,000 in 1986 to 467,000 in 2017, the Chamber of Mines calculates that “for every direct mining job, a further two indirect jobs are created in downstream and support industries”. This meant the industry accounted for altogether 1.5 million jobs and supported – directly and indirectly – 15 million people.

Many of them live far from mines, and in some of the country’s most economically deprived regions.

Among other indicators of mining’s importance are that coal is the source of 90% of South Africa’s electricity, and accounts for 60% of the revenue of Transnet Freight Rail, the employer of more than 31,000 people across the country; and that the industry contributed R291-billion to GDP directly in 2016, but spent R245-billion on purchases of goods and services from other sectors of the economy, according to the Chamber.

Yet, Kane-Berman points out: “Although ministers repeatedly call for the revitalisation of the manufacturing sector, they appear to forget that one of the factors curtailing its growth is the decline of mining, in part because of policies whose effect is to discourage investment in the mining industry.”

On the strength of his pro-investment approach, Cyril Ramaphosa’s elevation is being viewed hopefully – and it comes at a propitious time.

Kane-Berman cites the Mine 2017 report by PricewaterhouseCoopers (PWC) which said that “after years of pulling back on investment, and exploration, the world’s largest mining companies were ready to move ahead. They had reduced debt, strengthened balance sheets, and taken the necessary impairments. They found themselves in step with an awakening global demand for most commodities”.

Yet, a key impediment to a turnaround in mining remains unresolved: regulatory uncertainty and, in particular, the controversial Mining Charter, the third iteration of which is the subject of a judicial review due in the High Court later this month.

The IRR’s report quotes Bernard Swanepoel, former chief executive of Harmony, as warning in June 2017 that the charter would “make new investment impossible” and “may truly mark the beginning of the end of the mining industry”.

He indicated that “there was next to no exploration happening”, and there was “also a risk that most of the assets would remain in the ground because there was no funding, investors having been kept away by government policies, regulatory uncertainty, and a hostile labour regime”.

The potential dividend of policy reform emerges clearly from a recent Chamber of Mines poll of mining companies’ investment intentions.

One key question was: “What if the South African mining sector could get back into the top 25% of investment attractiveness rankings, which is where our potential suggests we should be?”

Sixteen companies representing a cross-section of commodities, and the overwhelming bulk of mining production in South Africa, responded.

According to economist Langenhoven, who analysed the responses and other bank and company data, the estimated currently planned capital spending in the mining sector stretching over the next four years amounted to more than R145-billion, but potential additional capital expenditure “in a more certain and conducive environment’ could be as high as R122-billion.

The positive effect on employment creation would be nearly 48,000, and a total of 150,000 if indirect jobs were added.

“If some of the Chamber’s figures are applied to the additional 48,000 mining jobs,” Kane-Berman writes, “almost half a million people would benefit from this additional investment … because one miner’s income feeds 10 other people, some of whom live with the miner while others survive elsewhere on his or her remittances.”

“Some of this would be spent in communities surrounding the mines, and some would be sent to families in rural areas. The indirect jobs that the additional investment would create would substantially increase that figure of R13.3-billion.”

South African mining, the report concludes, has life in it yet – even if investment is “much lower than the country’s mineral riches warrant”.

It was also quite resilient. “Crises over costs and slumps in commodity prices are nothing new. Nor is industrial unrest. Time and again the industry has demonstrated the ability to adapt and survive.”

But it could do so much more than merely survive.

“Whether it is now able not merely to survive but to thrive and grow,” Kane-Berman writes, “rests mainly in the hands of a man who cut his teeth as a trade unionist in the mining industry, Cyril Ramaphosa.

“He alone has the power to replace the present hostile environment with policies that welcome and encourage this vital industry.”

Since its establishment 150 years ago, the South African mining industry “has faced enormous challenges – political, social, technical, and economic. One way or another, it has overcome most of these – only to be faced with new political, social, technical, and economic challenges. Although none of these can ever be finally overcome, the political challenge is now probably greater than the other three put together.” DM

Michael Morris is head of media at the Institute of Race Relations (IRR). Read the full report.

Photo of Marikana miners shortly after the 2012 massacre by Greg Marinovich.

James Stent for GroundUp • 8 hours ago