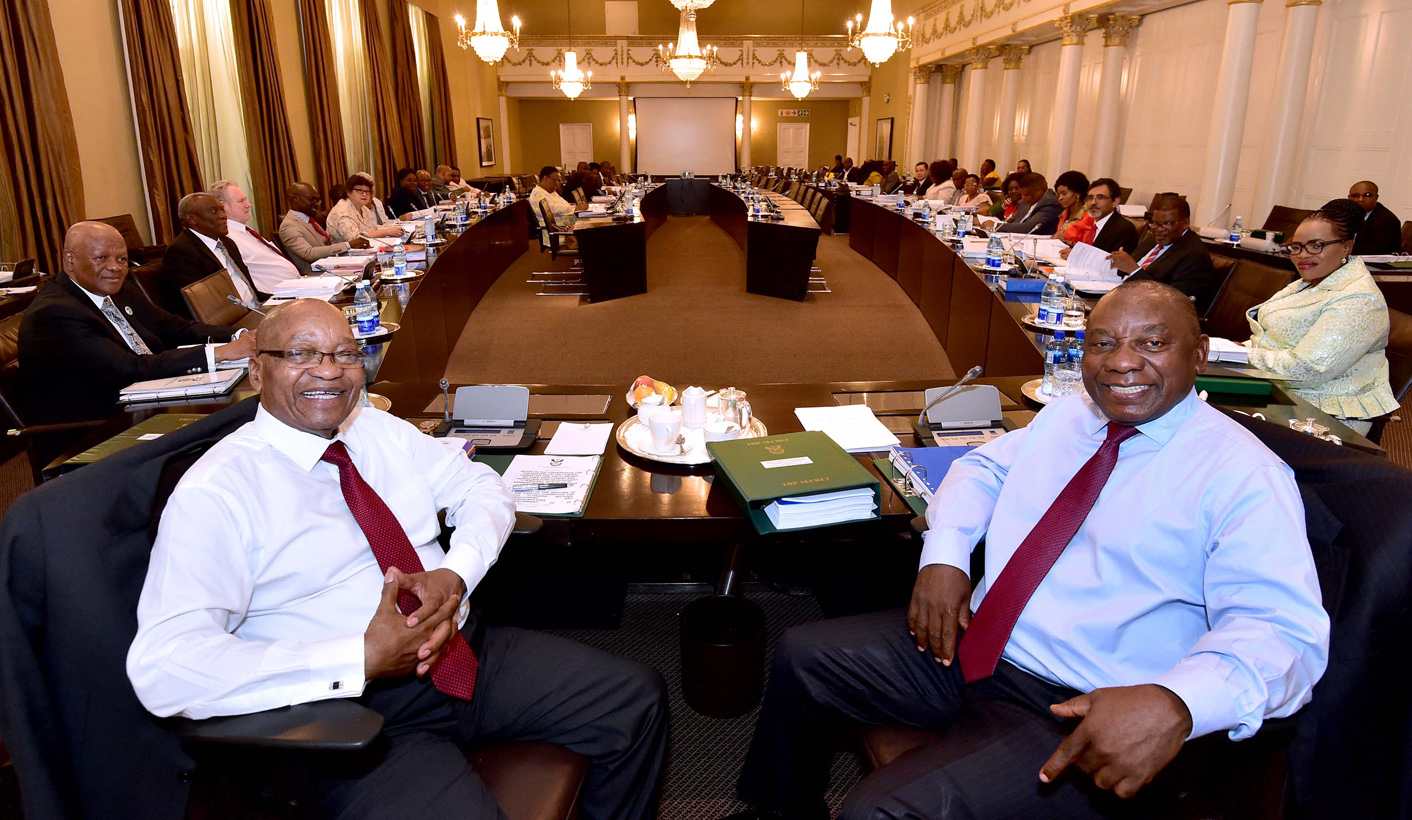 A new date for the State of the Nation Address on Wednesday remained elusive, as ANC political dynamics play out. ANC President Cyril Ramaphosa moved to calm the political turbulence, saying his discussions with President Jacob Zuma on the “transition” and “matters relating to his position” as South Africa’s president have laid “the basis for a speedy resolution”. But opposition parties said they’ll meet again on Monday as the governing party’s internal ructions could not “hold our country to ransom”. By MARIANNE MERTEN.

Backroom political scrambling has set in place a tense holding pattern in the governance terrain. How exactly this plays out right now is anyone’s guess. But there is a topsy-turvy possibility that the Budget, set down in Parliament for 21 February, to allocate the rands and cents to government programmes could be delivered without any indication of government’s priorities for the year, which are usually sketched out in the presidential State of the Nation Address (SONA).

Parliament’s presiding officers on Tuesday announced SONA’s unprecedented postponement amid opposition parties’ insistence that President Jacob Zuma could not deliver SONA because he was “discredited”, the EFF’s insistence that its no confidence motion would first have to be dealt with, and against the machinations within the ANC over Zuma’s exit – officially dubbed the “transition” in ANC speak.

Determination four days earlier to go ahead with SONA regardless of any possible disruption had given way to a delay in efforts “to create room for establishing a much more conducive political atmosphere in Parliament”. The presidency followed suit later, saying Zuma also had requested the postponement “due to certain developments which make it not conducive to successfully hold the sitting and deliver the SONA”.

That postponement created the space for the ANC’s highest decision-making body, the National Executive Committee (NEC), to deal with Zuma’s exit from the Union Buildings, raised and rejected in Sunday’s meeting between the president and party officials. But that top party NEC meeting was postponed to 17 February following Tuesday’s “fruitful and conducive” discussion between Zuma and ANC President Cyril Ramaphosa, and South Africa’s deputy president.

The Chief Whips’ Forum, a consultative multiparty structure in Parliament, was told on Wednesday that 17 February was the outer timeline relating to setting a new SONA date. And so a rescheduled SONA has effectively been linked with the ANC NEC meeting, although in these politically troubled times anything is possible.

If 17 February indeed becomes the key date in South Africa’s political calendar, echoing September 2008 when the ANC recalled then president Thabo Mbeki, there is only one parliamentary working day left before Budget. Mondays are MPs’ days in their allocated constituencies. And so matters of governance may yet depend on the resolution of dynamics in the ANC where support for and against Zuma is finely balance and contested. To have SONA before such a resolution would bring back to the fore those factors which led to the presidential address’s postponement.

Opposition parties were not altogether happy after the Chief Whips’ Forum.

“As IFP we made the point a political party can’t hold Parliament and government to ransom… It would be desirable for SONA to be before Budget,” said IFP Chief Whip Narend Singh.

United Democratic Movement (UDM) Chief Whip Nqabayomzi Kwankwa agreed. “We postponed SONA for the right reasons, but we can’t condone this uncertainty by the ANC,” he said, adding that it was “meaningless” to have the Budget without SONA setting out government priorities.

Later in the day there was a meeting of opposition parties, including the DA, EFF, Cope, UDM, African Christian Democratic Party (ACDP) and Freedom Front Plus. They agreed the situation was untenable, and would meet on Monday to discuss the EFF motion of no confidence, scheduled for 22 February, and Parliament’s role in the election of a new president.

“(SONA) cannot go ahead while there remain two centres of power in the ANC and in national government. Having said that, our country cannot be ground to a halt to allow for a compromised ANC to fight their internal battles. This must be resolved as soon as practically possible, so that South Africa can move past the ruinous Zuma era, and towards the future,” a joint statement said. “The interests of our country reach far beyond the ANC. We cannot sit around and wait for the two centres of power to fight their war of attrition while our country is left in limbo. The ANC cannot hold our country to ransom.”

ANC Chief Whip Jackson Mthembu said that as he’s not a member of an opposition party he could not comment. But by then Ramaphosa had already stepped in to try to calm the political turmoil in a statement addressed to “Fellow South Africans”.

Acknowledging that “there has been a lot of speculation and anxiety about the position of President Jacob Zuma as the head of state and government of our country”, Ramaphosa’s clarification centred on the ongoing “constructive” discussions relating to the transition and matters related to Zuma’s position. These discussions would be concluded in “the coming days” – and followed by a report-back to the ANC and South Africa.

“I am certain that the process we have now embarked on will achieve an outcome that not only addresses these concerns, but also unites our people around the tasks that all of us must necessarily undertake to build our country. We will be able to communicate further on President Zuma’s position as President of the Republic once we have finalised all pertinent matters.”

So what really do we know? Bottom line: not too much.

There’s no new date for SONA yet, but a commitment to go ahead with Budget as scheduled on 21 February. There are “fruitful and conducive” discussions between Zuma and Ramaphosa with a view to a “speedy resolution” of issues relating to the “the transition and matters relating to his (Zuma’s) position as the President of the Republic”. And the ANC NEC will meet on 17 February.

Amid the political turbulence and backroom machinations, Wednesday saw a move to step up the ante in political communication. It’s business as usual – in government, the ANC and Parliament. The Government Communication and Information Systems (GCIS) took to Twitter to post photographs of a smiling Zuma and Ramaphosa co-chairing the regular Cabinet committee meetings. The presidency issued a statement that Zuma would officiate at Saturday’s Ubuntu Awards to celebrate “South African citizens, who, through their integrity, passion, patriotism and humility have raised the South African flag high on an international stage”. And the ANC publicised its rally on Sunday on Cape Town’s Grand Parade where Ramaphosa will address people on 28 years to the day since Nelson Mandela was released from jail.

Will anyone buy it? Well, ANC talk of “transition” or “management of the transition between the 5th and 6th administration of government” are the strongest signal yet that there is a deal done on Zuma’s departure from the Union Buildings.

But the governing ANC has a long-standing tradition of doing things in its own time, its own way. And so South Africa remains on tenterhooks. DM

Photo: A handout photo made available by Government Information Services (GCIS) shows deputy President Cyril Ramaphosa (R) and President Jacob Zuma (L) during a government committee meeting in Cape Town, South Africa, 07 February 2018. Overnight talks between the two leaders was reported during which they discussed the political future of South African President Jacob Zuma. A top level ANC meeting scheduled for today has been postponed until 17 February 2018 in which it is reported the fate of the embattled president will be decided. EPA-EFE/Elmond Jiyane / GCIS