#OccupyLuthuliHouse Round 2: Pro and anti-Zuma protesters face off outside the ANC’s headquarters 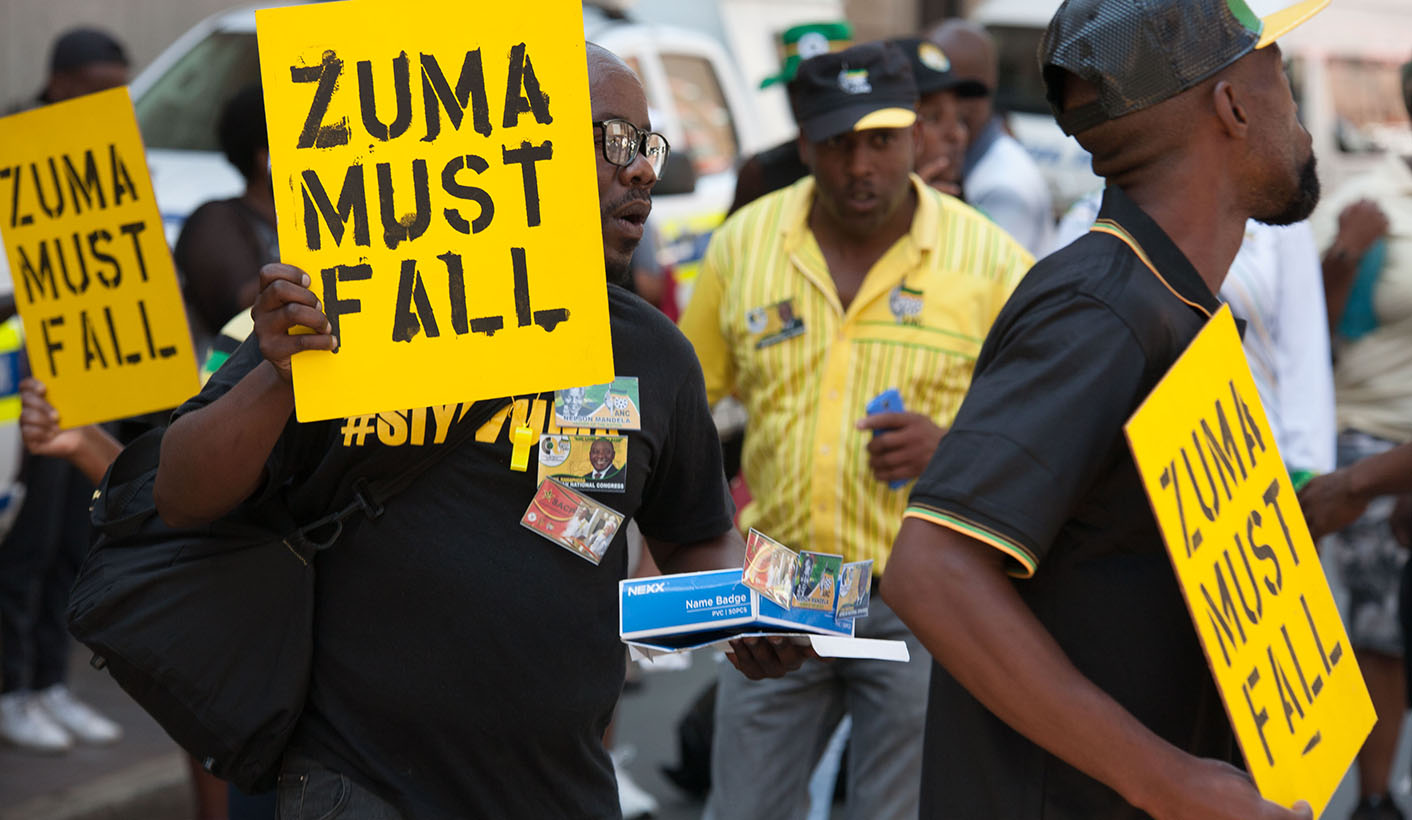 Buoyed by Cyril Ramaphosa's win at the ANC's elective conference, a growing negative perception and a series of damning court judgments against President Jacob Zuma, a group calling themselves Defend Luthuli House gathered at the ANC headquarters in the Johannesburg city centre to stop pro-Zuma supporters from handing over a memorandum at the offices. By PUSELETSO NTHATE, NKATEKO MABASA, BHEKI SIMELANE and ORATENG LEPODISE.

The plan on Friday was simple as far as the #HandsoffZuma group, led by Andile Mngxitama, was concerned.

They would draw up a memorandum demanding among others, that:

And then on Monday they would march to Luthuli House in Johannesburg to hand it over.

“We only have one President,” said Bafana Nzuzo, President of The Unemployed People’s Trust. “We elected him and he should deliver the speech at SONA.”

But what the Black Land First (BLF) group, the Unemployed People’s Trust and other organisations didn’t factor in was the chance that their action would be opposed. But that is exactly what happened when members of Defend Luthuli House arrived at the building early to “protect” it.

Clashes began at around 8.30am when a heated confrontation ensued between a group of anti-Zuma supporters and another ANC member who ordered them to stand across the road from Luthuli House. The group hushed him and called him an agent of the rogue groups against the current ANC leadership.

Photo: Throughout the day there were scuffles between the two sides. Photo: Greg Nicolson

A really heated moment occurred around 10am when a man in a BLF T-shirt walked past Luthuli House. He escaped by the skin of his teeth as the anti-Zuma faction, which had been singing all along, pounced on him and started to beat him up. He was saved by the swift action of nearby police officers who escorted him to safety.

Later a van carrying protesters dressed in BLF colours was surrounded and its occupants attacked. Again several police personnel were on hand to separate the two groups but not before several punches and kicks flew.

On Monday afternoon the ANC ‘s National Working Committee (NWC) was expected to meet at Luthuli House to discuss Zuma’s tenure. Pro and anti-Zuma demonstrations are likely to continue outside. The Defend Luthuli House faction has sworn not to leave Luthuli House until Zuma resigns.

One of its leaders, Nicholas Mjempu said they were there to prevent the Black BLF movement from coming anywhere near Luthuli House. “We don’t want to see those people here. They have no business here,” Mjempu said.

Zuma is due to deliver the annual State of the Nation Address on Thursday but opposition parties and civil organisations have been calling on the ANC to make sure that he does not do so. Speaker of Parliament, Baleka Mbete has said she has no power to postpone the address. Opposition parties have threatened to approach the courts if she does not reconsider.

On Sunday night Future South Africa called on to Ramaphosa to ensure that Zuma should not deliver the SONA, calling the sitting President a poor leader, who is always involved in scandals and has flouted the Constitution.

Although some of its members were chased away from Luthuli House in the morning, the #HandsOffZuma faction repeatedly made their way back to the headquarters where they had repeated showdowns with the anti-Zuma faction.

“It’s a free country, we are allowed to go anywhere. The attack on our members especially by black people is unacceptable. We will avoid confrontation going forward and fight for our ambitions. Hands off Zuma because he is under immense pressure from the ANC. Cyril must wait until 2019. It cannot be that we have a Venezuela and Zimbabwe situation in our country,” said Thandiswa Yaphi, a BLF member.

According to Yaphi, the ANC is organising a coup in the country and as the BLF members they cannot allow that.

“The plan is to march peacefully to Luthuli House and deliver a memorandum and disperse,” said Yaphi.

“We have to protect Luthuli House because these are not Zuma’s offices this is Cyril’s house,” said Josephina Ndlovu, from Soweto, a Defend Luthuli House supporter.

Defender of Luthuli House, Mjempu, said: “Zuma was elected as the President of the country through ANC and not by the country itself so he should step down and allow our new president (Cyril Ramaphosa) to run the country.”

According to Mjempu, they cannot be addressed by a thief so they see no need for Zuma to be addressing the nation at SONA.

On Monday afternoon a group of BLF member made their way to Luthuli House with a banner: #HandOfFZuma Warning you remove Zuma 2019 votes will be gone. ANC is not for sale!

While the pro-Zuma protesters made their way to Luthuli house the anti-Zuma faction waited for them outside the ANC headquarters signing ayigale impi (let the fights begin).

ANC Secretary General, Ace Magashule, despite being jeered as he left, brought an end to the #HandsoffZuma march when he arrived to accept their memorandum. DM

Photo: Anti Zuma supporters gathered outside Luthuli House to “defend” it against members of the #HandsOffZuma group. Photo: Greg Nicolson